Sign Up
Log In
There are no services available.
You are the owner of this article.
Edit Article Add New Article
Home
News
Opinion
Be Heard
Sports
Classifieds
Obituaries
Customer Service
e-Edition
Paris Life
1 of 2 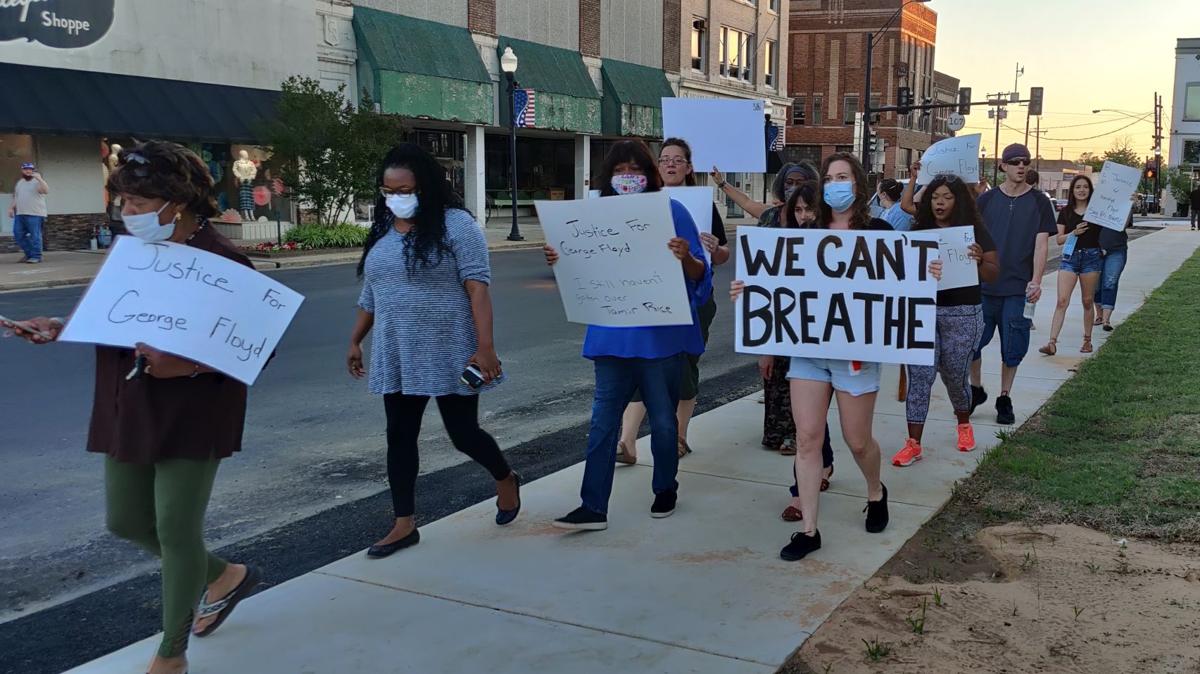 Demonstrators in downtown Paris marched around the square Saturday evening calling for equality.

Demonstrators at the downtown Paris square bow their heads in prayer after a March around the square during which they called for equality Saturday in the wake of George Floyd's death.

Protests have swept the nation in recent days in the wake of the death of George Floyd, a Houston native killed May 25 as a Minneapolis police officer knelt on his neck for about 8 minutes. Area residents joined that movement Saturday as roughly three dozen people came together at the Paris downtown square to peacefully protest police brutality and raise awareness of the challenges against America’s black community.

“A lot of people have come out all across the world to show their support in protesting the murder of George Floyd,” attendee Chevis High said. “We’re out here protesting because we want justice. Over the last five years, there have been 82 unarmed African Americans murdered by the police, and of those 82, we’ve had zero convictions, and it’s time we hold them accountable for their actions the same way we’d hold any civilian accountable for their actions.”

High was likely referencing a list kept by NewsOne that details the killing of unarmed black men and boys, of which there are now 83 after Louisville, Kentucky, police shot and killed David McAtee while returning fire on a crowd during a protest event.

"Only 13 of the 104 cases in 2015 where an unarmed black person was killed by police resulted in officer(s) being charged with a crime. 4 of these cases have ended in a mistrial or charges against the officer(s) being dropped and 4 cases are still awaiting trial or have a trial underway. Only 4 cases (Matthew Ajibade, Eric Harris, Paterson Brown Jr., and William Chapman) have resulted in convictions of officers involved, with a fifth case (Walter Scott) resulting in the officer pleading guilty.

For Paris protest attendee Vanessa Woods, Floyd’s death served as a harsh reminder that a similar fate could befall one of her family members.

“I have a son and four grandsons, and I’m tired of looking at the news and seeing our young, innocent men being killed, and I want to see that changed,” Woods said. “When I saw it, I was angry, frustrated and heartbroken. I can’t describe it.”

Protest organizer Carolyn Williams said she decided to do something after seeing the protests that have taken place in cities across America in recent days, including Dallas, Houston, Minneapolis and Los Angeles.

Reactions varied on the wider protest movement, as many of the ongoing protests throughout the country have become violent.

“I have understanding,” High said. “It’s a lot of hurt and a lot of anger (and) pain going through these people’s minds and bodies right now. A lot of people might not agree with the rioting and looting, but, me personally, I can definitely understand where they’re coming from because when is enough enough? When are the people who have the power to do something about this going to step up?”

To Williams, the protests sweeping the country are necessary.

“Let it burn,” she said. “It’s sad to say it, but that’s how we’re going to get any sort of change. They’re not listening or paying attention to us. This is how we make a change.”

Similarly, protest attendee Brenda Cherry said she understands what the protestors are thinking and feeling.

“I’m actually glad they’re doing it,” Cherry said. “I’m thrilled that protests are happening all across the country. At first, I didn’t particularly care that they were rioting. Like Dr. Martin Luther King said, ‘Riots are the voice of the unheard.’ So this is a scream of pain and asking for help.”

Though about three dozen people took part in the protest at the square, others voiced approval or condemnation as they drove past in vehicles. At one point during the protest, a man lowered his car window to lead a chant of the popular protest slogan, “No justice, no peace.” But not everyone who passed by was supportive.

“All lives matter, not just black ones,” one passer-by shouted from his car. “Stop being racist.”

Local relations with law enforcement are fraught, attendees said. Cherry said there is some mistrust of local law enforcement, adding that one way to improve relations would be to have more people of color on the local police force.

High similarly said there was mistrust, but also said he thinks relations with local police have improved in recent years.

“I will say that it has improved a lot, but I still think that there is work that needs to be done,” High said. “There is still a lot of people upset by the fact that there have been murders here in town that have gone unsolved. We would still like justice for that. But as far as officers being involved in the community, one thing I do like is here in Lamar County I have yet to see an officer overreact to a situation. I have friends who are police officers, and I’ve heard stories where a life could’ve been taken but our officers showed restraint and it was not. So for that, I do commend our local law enforcement and I hope they continue to do that.”

As the protest came to a close, Gray and attendee Sharmeca Payne led the gathered protestors in prayers.

“We have not stopped believing, God,” Payne said. “We know that you are able… We will not let this divide us, God.”

The event came together quickly, as Williams said she only decided to organize the protest about six hours in advance.

“I’m very pleased with this turnout, with the short time we had to get this together. I thought I might be the only one out here, but if I was the only one out here I’d stand alone. … But a lot of people are feeling the same way I was feeling. I’m really hurt and devastated and I can’t fully describe how I feel.”

Another protest is planned for 6 p.m. Wednesday night at the Paris square.

In a statement, Abbott said the declaration would allow him to designate federal agents to serve as peace officers in Texas.