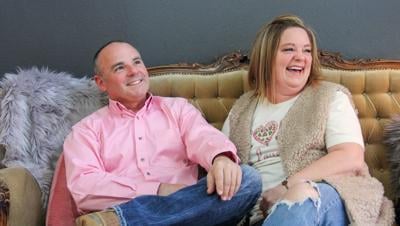 When local photographer Kelsie Glass thought up a Valentine’s Day project, rather than put the call out for annual youth mini sessions, she decided to go a different route. She wanted to find a couple who would share their love story and who weren’t afraid to do so in front of a camera.

“I made a post on Facebook calling for nominations of couples. Within minutes, my notifications were blowing up,” Glass wrote in a blog post. “I knew I would have a pretty good response because I normally do when the word ‘free’ is involved, but I had no idea just how overwhelming the response would be.”

Out of the more than 100 people who reached out to her, it was Jacey Baughn’s email that caught Glass’s attention.

This is what Jacey had to say:

“Hi there! My name is Jacey Baughn, and I would like to nominate my parents, Jason and Sissy Baughn, for your 20-year-plus couple giveaway! They’re going on 27 years in May.

“They got married when my mom was 17, a senior in high school, while my dad was at home on leave from the Marine Corps. I think they are so deserving of this because they are always so willing to do for others and deserve to be treated! They have made it through so many things in their 27 years, from my dad being deployed to Japan while she was pregnant with me, also giving birth while he was gone, raising my brother and I, which was no easy feat, I’m sure, to all the odds and ends between. They would be so appreciative if they were lucky enough to win! Thank you so much for your consideration!”

“I knew I couldn’t say no,” Glass wrote.

Glass, who owns KG Photography, welcomed the Baughns into her studio for a Q&A session to accompany their photos. The following is an excerpt of that interview:

Q. How did you two meet, and how old were you?

“High school. I was 17 — no 15,” Sissy said as she looked over to her husband with this schoolgirl grin. Jason nodded in agreement.

Q. Tell me about your first date?

“I honestly don’t remember. I remember us riding around in my cousin’s truck that I borrowed and that’s about it, that’s what I remember,” Jason said. (When asked if Sissy’s father was mad about the company his 15-year-old daughter kept, Jason explained Sissy’s mama was the more protective parent.)

Q. When did you realize you wanted to spend forever with her?

“Pretty much as soon as she turned and looked at me and said ‘Hi Jason,’ and I realized she knew my name,” Jason said. “True story, it’s true.” (Sissy blushes, then Jason blushes at the profession of love to a stranger.)

Q. Who said I love you first?

“Definitely him,” Sissy said, shooting Jason a look. He nods and smiles. “It had to be me because I already knew it.”

Q. And how long have you been married?

“I went to the Marine Corps, and she came with me right after she graduated,” Jason added, tossing in that it wasn’t a shotgun wedding.

Q. What’s your favorite thing about him?

“Snap it now cause she’s clueless and doesn’t like anything about me,” Jason jokingly said.

Q. OK, what’s your least favorite thing about him then?

“How hard he is on himself,” Sissy said after everyone giggled.

Q. What’s your favorite thing about her?

“Awe, man, I can’t really say, I mean, um, she’s just good to me,” Jason said. “She always has been. She’s always taking care of me, and she knows what I need before I need it. True story. And she gets it. I never want for anything, I never have. If there’s anything I ever wanted, it doesn’t matter how much it is or whatever, I’ll say ‘I want you to have it,’ and she will say ‘no, I want you to have it.’”

Q. What’s your least favorite thing about her?

“Ummmmmm,” Jason said, mumbling something under his breath. “Come on, out with it,” Sissy teased before Jason voted to move on to the next question.

Q. Tell me about a time that the two of you might’ve struggled in your relationship and what you did to overcome it?

“Hmmm, I would say probably whenever I first got back from the Marine Corps. I was a dad now. You’d already been doing the mom thing. Jacey was what? 9 months old by now?” Jason said.

“I was a single mom, and he was a bachelor,’” Sissy said, smiling while Jason tried to assure me that he was in Japan but he wasn’t fulfilling any bachelor roles. “Same difference. He got to come and go as he pleased. ‘Here, let’s go out.’ ‘Well, we can’t. We have a baby. We have to get stuff together.”

“We struggled a lot with that. I don’t know how we overcame it, but we did. It wasn’t easy. There was some leaving involved, but it never lasted long,” Jason said. “Now, leaving involves me going out to my man cave.”

Q. What does love mean to you?

“Just that I can’t live without him,” Sissy said through tears.

Q. What advice would you like to leave for the younger generation?

“But it’s worth it. It is worth it, ya know?” Jason added. “Stick it out. It’s too easy to quit. It’s easier to quit than to do the right thing and stay with your mate. If you married your mate, then you should know that they are your soulmate. Stay with it. Don’t leave. If you do, come back. It’s not all peaches and cream.”

To see the interview in its entirety and the photo gallery that goes with it, visit KG Photography at kgphotography2011.com and visit her Facebook page at facebook.com/Kg.Photography2011.