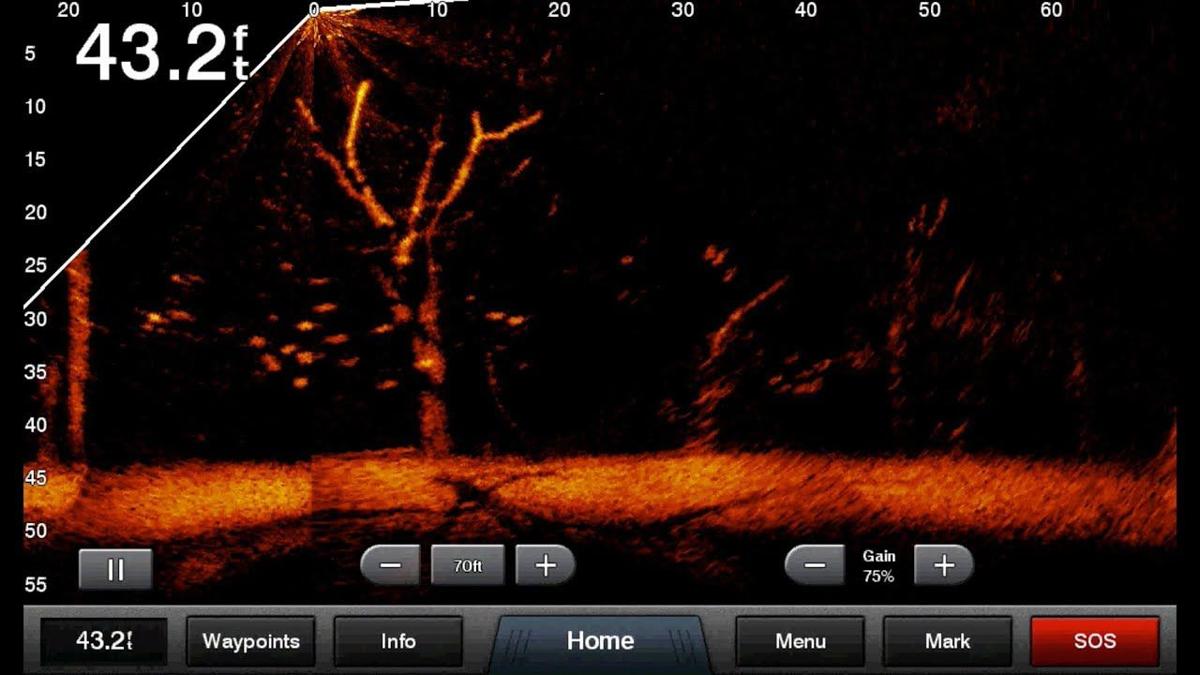 Sonar for finding fish has progressed light years since that first flasher unit decades ago. This Garmin Panoptix Livescope allows you to see what’s under the water in real time video. Fishers can actually watch the fish take the bait.

When I was a youngster, I remember Dad using an old window weight tied on a piece of rope to determine the depth below our little 12-foot wooden boat. He had the rope marked in 3-foot increments, and he lowered the weight overboard and counted down until the weight hit bottom. We did a lot of trotlining and he always set his lines parallel to a creek channel.

I remember spending hours bouncing that weight off bottom and marking trees that grew along the submerged creek channels. Later the flasher units became popular. Finally, there was a way to determine the depth of the water and actually see flashes that were suspended fish. The flasher was a game changer. These units dominated the fishing world throughout the ’70s and to this day, advanced flashing units are on the market.

As technology increased, so did the quality and function of fishing sonar. When LCD came along, just about every boat had a graph. I remember the first time I fished with a paper graph that employed a stylus to mark rolls of graph paper. These paper graphs were state of the art tech that not only plotted a permanent record of bottom structure but suspended fish, trees, etc. Every guide I fished with in the late ’80s had their boats rigged with these units, and open water species such as stripers and white bass that cruised open waters chasing shad could run but couldn’t hide.

Finally the technology of the very accurate paper graphs was paired with the popular LCD screen and rolls of paper were eliminated. We were all happy fishermen then, thinking that sonar was as good as it would ever get. After all, all we had to do was drop a transducer into the water and turn the graph on. Bingo — we could see the bottom and everything under the boat. How could it get any better than this?

Fast forward from the ’90s to more recent times when side imaging became popular. With side imaging, we can shoot our sonar out horizontally and scan nearby structures that is not directly under the boat. But wait, it gets better.

A year or so ago, Garmin introduced the Garmin Panoptix Livescope, and after seeing this unit in action, I have to wonder just how locating fish and structure under a boat can get any better. But I make no predictions. By looking back through the years, it’s obvious even this awesome invention will be improved upon, and Garmin will probably be the company that does it.

I first began hearing about the Livescope from my friend Seth Vanover, who guides on Lake Fork and Lake O the Pines. Seth described the unit to me in great detail on my outdoors radio show in several segments. So last week, while fishing with another great friend, Stubby Stubblefield who makes the popular Stubby’s Cheesebait, I finally got to see the Livescope in action.

I was astounded when Stubby pointed to the unit and said, “Luke, that is your bait doing down. See the catfish coming up to it? Now it’s very close to bottom. Hold on! See that fish coming to the bait? Set the hook, he has taken the bait!”

This scenario occurred many times out on the water at Lake Fork last week and to be truthful, I had trouble concentrating on fishing. I couldn’t keep my eye off the Livescope and watching exactly what the fish were doing under and to the side of the boat. Live, real-time video of what is going on under a fishing boat is truly a game changer.

Stubby later told me he had earlier noticed an isolated submerged tree out in open water on his sonar.

“I locked the spot in on my GPS and the boat stayed precisely over that isolated tree. One look at the Livescope indicated I had located a mother lode of big crappie,” he said. “The school was suspended around the larger limbs of the tree and I was able to drop baits right in front of their noses! In no time I caught the making of a fine fried crappie dinner.”

It will be interesting to see how the use of real-time live viewing of the water under a fishing boat catches on. At present, these units are going off the shelves as quickly as they are stocked.

I will make this prediction: In a very short time, most every guide or tournament fisherman that depends upon catching fish to make a living will have this technology on his or her boat. It is a gamechanger for sure.

Before sacking up our limit of channel catfish last week, Stubby pulled up to one of his GPS waypoints and we studied the Livescope. “These are hand-size bluegills stacked up around those larger limbs and this tree is loaded. They are easy to catch and no better eating in the lake. How about a return trip targeting big perch. More to come on this Livescope action. I feel like a kid that has just discovered a new toy.