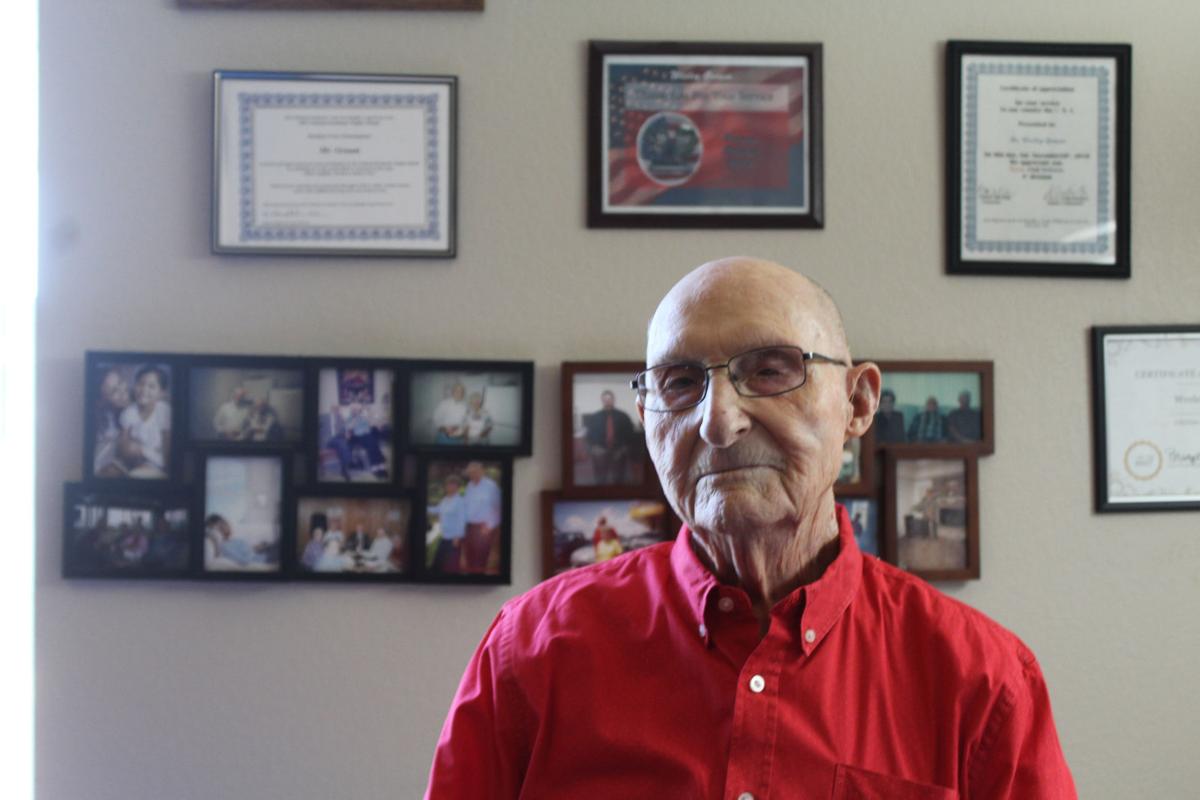 Wesley Graum, a resident at Stillhouse Rehabilitation Center, is turning 100 on Sept. 9. He sits here in his room at the center, surrounded by photos of family and friends and recognition for his naval service. 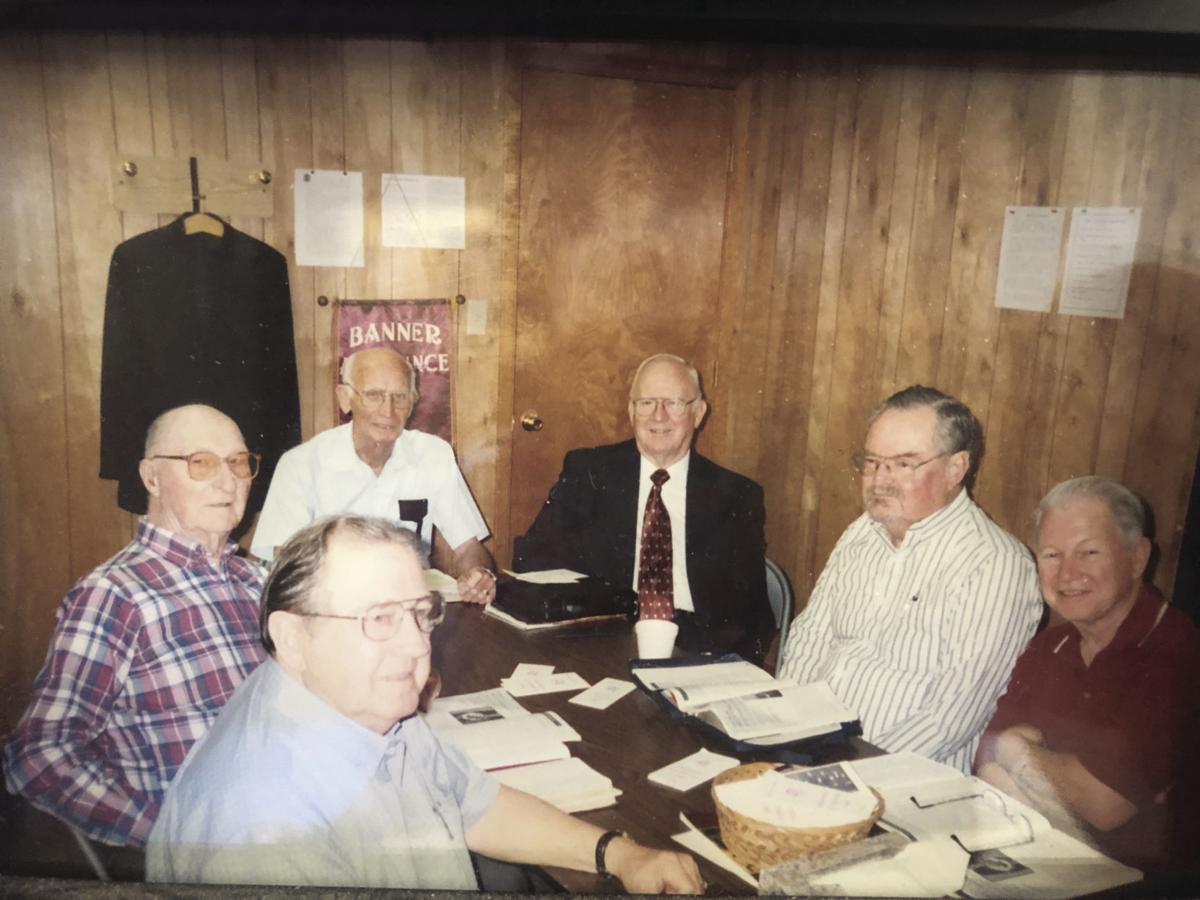 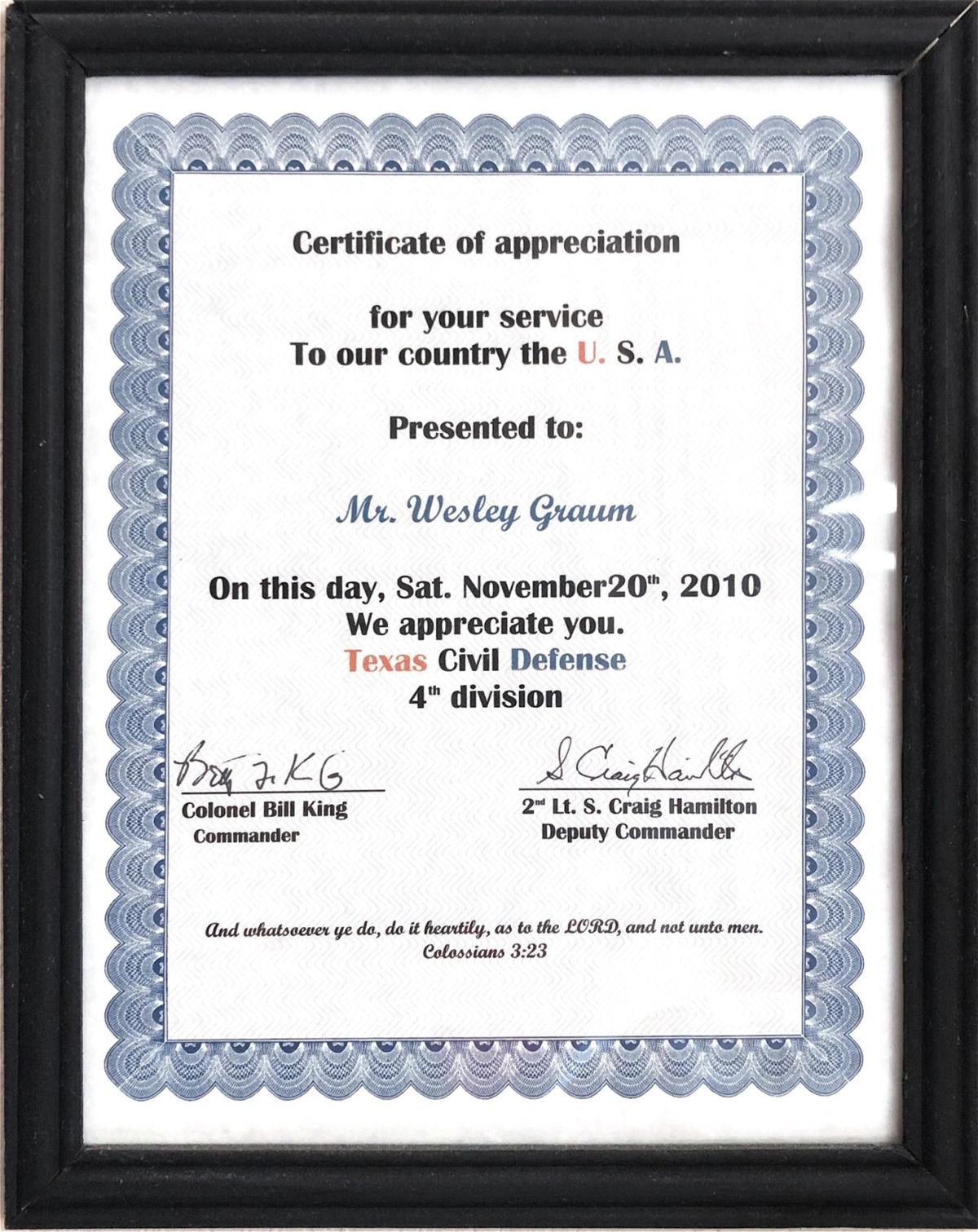 Graum received many recognitions for his naval service, including this 2010 certificate from the Texas Civil Defense. 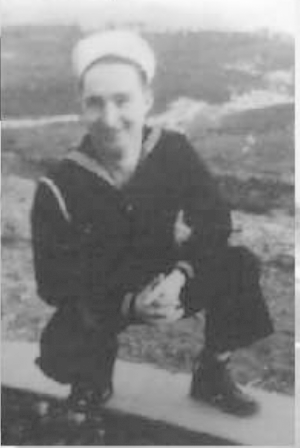 Graum as a U.S. Navy deckhand during World War II. He served in California and Alaska. 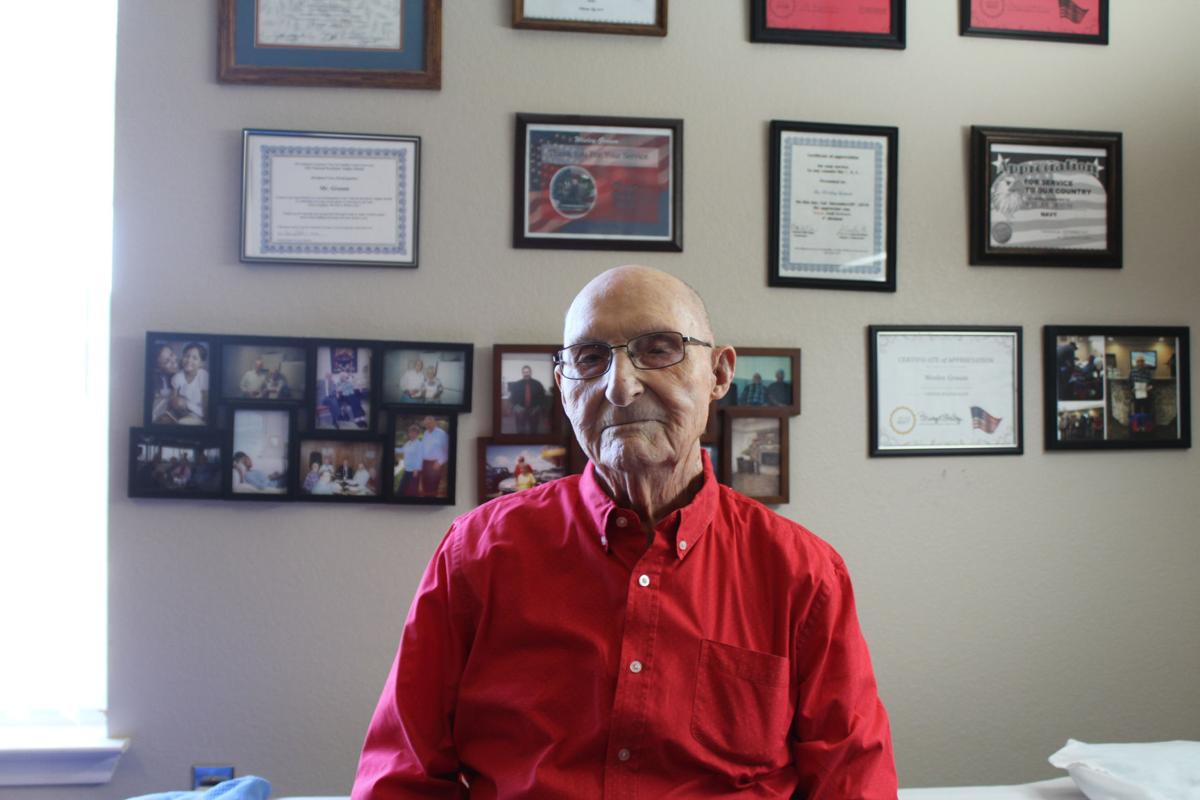 Wesley Graum, a resident at Stillhouse Rehabilitation Center, is turning 109 on Sept. 9. He sits here in his room at the center, surrounded by photos of family and friends and recognition for his naval service. 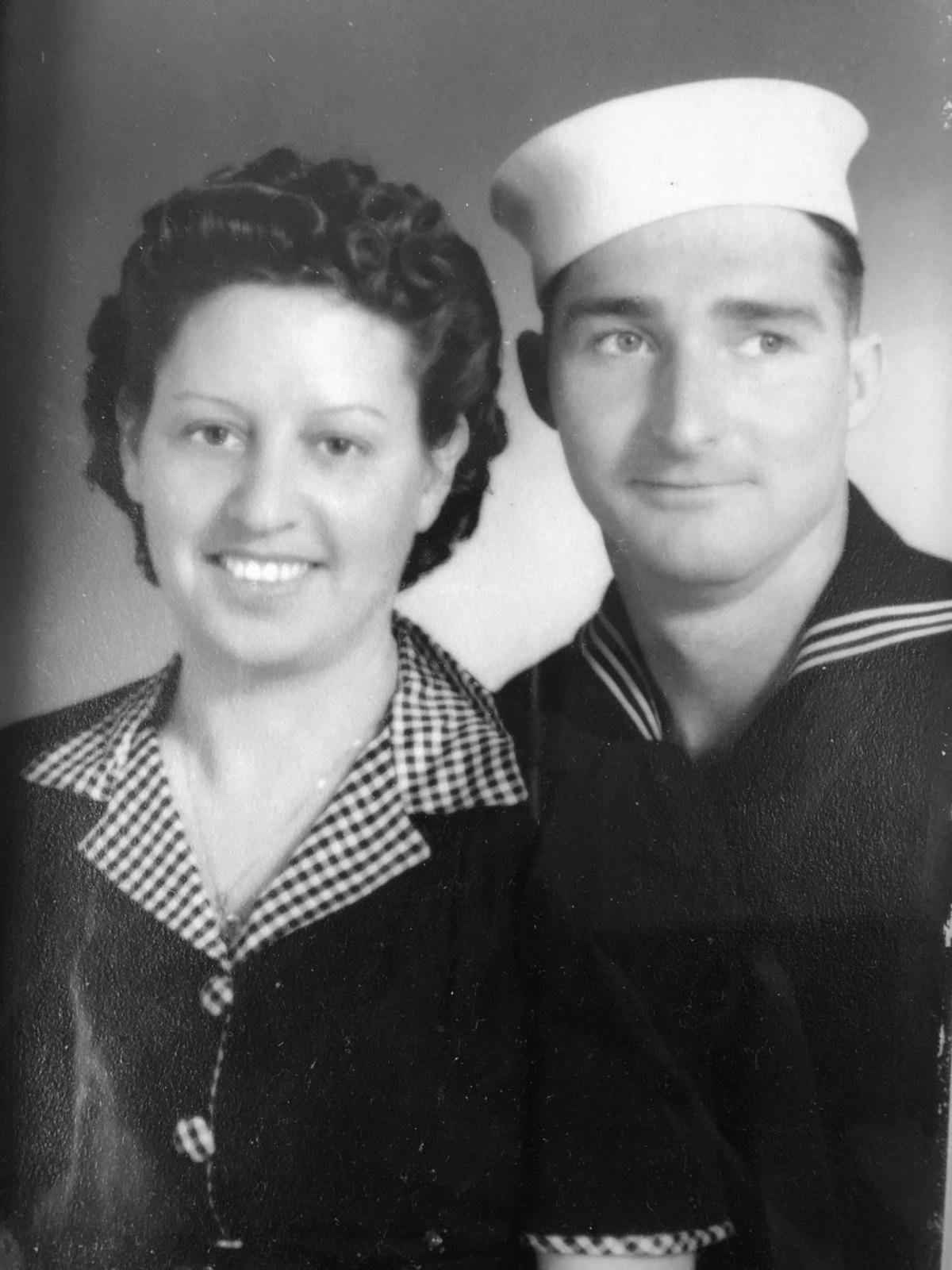 Wesley Graum and his wife, Ruby. They were married for 72 years.

Wesley Graum, a resident at Stillhouse Rehabilitation Center, is turning 100 on Sept. 9. He sits here in his room at the center, surrounded by photos of family and friends and recognition for his naval service.

Graum received many recognitions for his naval service, including this 2010 certificate from the Texas Civil Defense.

Graum as a U.S. Navy deckhand during World War II. He served in California and Alaska.

Wesley Graum, a resident at Stillhouse Rehabilitation Center, is turning 109 on Sept. 9. He sits here in his room at the center, surrounded by photos of family and friends and recognition for his naval service.

Wesley Graum and his wife, Ruby. They were married for 72 years.

EDITOR'S NOTE: Wesley Graum is turning 100 years old. His age was misstated as a result of information provided to the newspaper. The story is corrected.

At nearly 100 years old, Wesley Graum is a little hard of hearing, but he has a quick wit and a memory like a steel trap. He was married to his wife, Ruby, for 72 years. He’s worked on missile sites in California and tug boats in Alaska. He loves the color red. He served in the U.S. Navy during World War II. He loves a good pot roast.

But above all else, Graum loves God. The best day of his life was when he committed his life to Christ in 1942, he said.

“It has taken me through a lot of ups and downs,” he said. “I knew that I had — when I accepted Christ, I always had someone with me that was stronger than I was to take care of all my problems. That didn’t keep me from it, but I had somebody that went through it with me.”

Graum was born Sept. 9, 1919, in Telephone to Duffy and Claudie Lee Palmer Graum. A child of the Great Depression, he grew up with his brother, also named Claudie Lee, and sister, Rachel.

Times were hard, he said. He remembers picking cotton all day with his brother to earn enough money to buy school supplies. But now, years later, he shrugs it off.

“You didn’t feel bad because nearly everybody was in the same shape,” he said. “You didn’t know there was a better way. We didn’t think it was such a hard time because your neighbor was just about the same shape.”

Graum spent most of his life in Paris. He attended West Paris, 1st Ward and JG Wooten schools, but dropped out after seventh grade to help his family run their produce business.

Graum met his wife, Ruby, at a local five and dime. She was from Reno. Her family was the only one in the area with a sheet iron roof house. Graum still remembers their first date with his old Chevrolet, the kind that had to be pushed to get going.

“I drove it out to her house, and her whole family had to help me push to get it started,” he said. “We went to the lake with another couple that I knew, and the thing wouldn’t run. We had to walk back from the lake. I didn’t even have a dime for her to take a taxi.”

But at the end of the day —

“The love grew longer, better. And first thing you know, we were married.”

Graum joined the Navy on Sept. 14, 1943. He served until 1950 in San Diego, where he also received his GED, and in Alaska, where his boat patrolled for Japanese ships and suspicious cargo during World War II.

He worked on missiles in Abilene for General Dynamics, and later in food services for ARA Food Service and Campbell’s Soup.

The Graums moved back to Paris in the early 2000s. Ruby died May 23, 2009. The couple had no children. Graum still misses her pot roasts.

“She was a good wife, a good cook. Beautiful, loving, well-caring. She never met a stranger,” he said.

Graum now spends his days reading biographies, studying the Bible and “serving the Lord” at his home at Stillhouse Rehabilitation Center. He has seen a lot in his 100 years of life, he said. Want his advice? Get both sides of the story before making a decision; don’t value the accumulation of material wealth; and add dry-salt to blackeyed peas for flavor.

Sorry, there are no recent results for popular articles.

Sorry, there are no recent results for popular images.