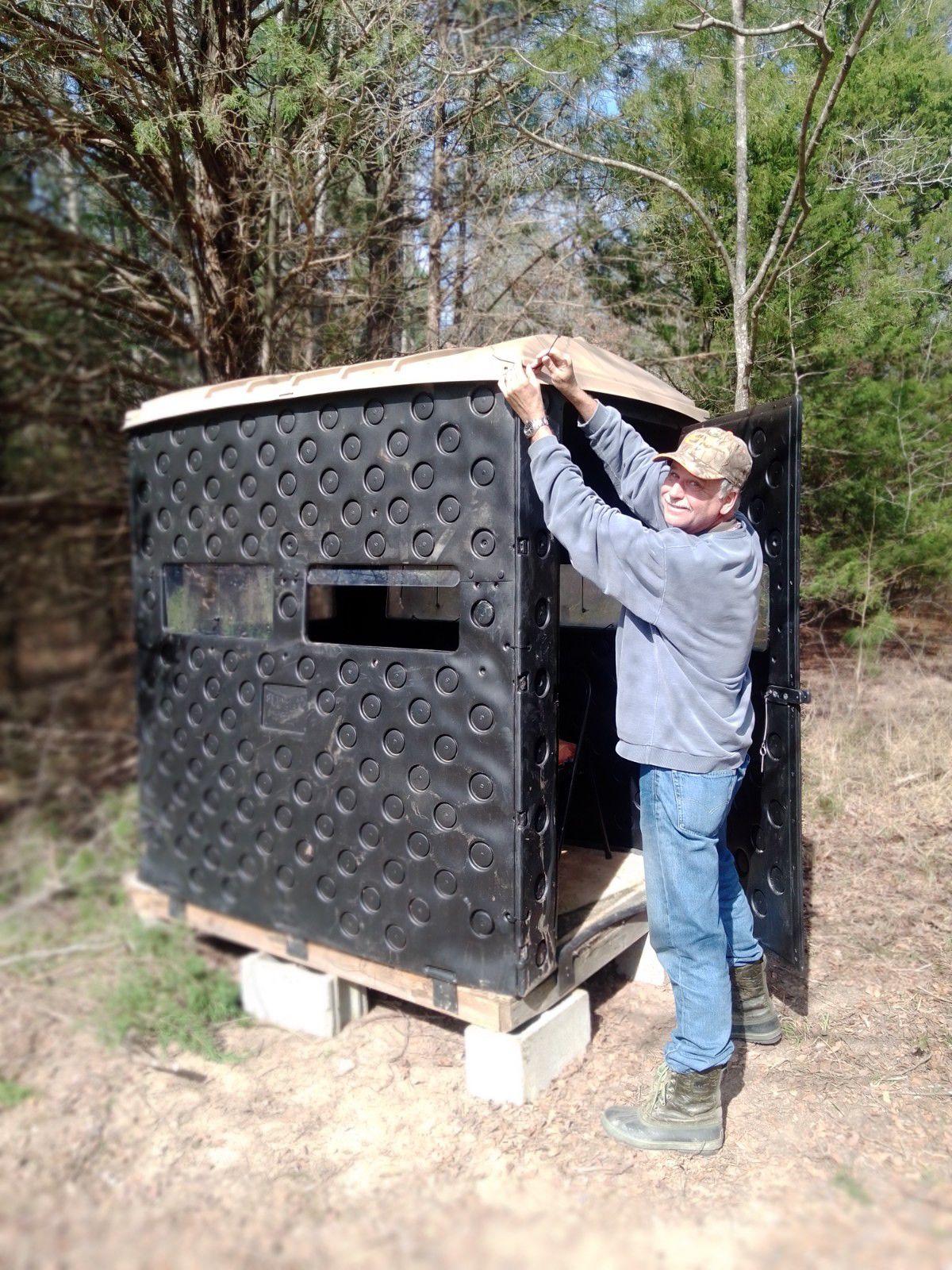 Jeff Rice is at work with the easy assembly of one of Luke Clayton’s Snap Lock Hunting Blinds. Moving from one hunting area to another is always a bit of work, but most hunters love getting set up on new hunting grounds.

All good things must come to an end, and so it is with hunting leases. Most Texas hunters lease the land they hunt, or they are fortunate enough to have friends or family with land. Talk very much with veteran hunters and most can tell the sad story of them having to leave a piece of land they have hunted for years and look for another lease.

This has occurred twice in my life. The first time occurred up in Jack County on the first hunting least I acquired in 1982. Growing up, I hunted on our little farm or just about anywhere I wished in Red River County; this was back in the 1960s when the idea of leasing land for hunting was first becoming popular.

The section of land I had leased in Jack County became very special to me and a couple of friends. We constructed a little hunting shack and installed bunks and a wood heater. The lease was affordable and in an area with a healthy turkey, quail and deer population. This is where my son took his first deer and turkey and where we spent a lot of time together hunting quail with our little Brittany spaniel, Rex.

Through the years, spending time on the lease became a big part of our lives, but the old rancher I leased from passed away and his lawyer son-in-law mailed me a lease agreement to sign that was about five pages long, increasing the lease amount by four times and making me liable for just about anything that might go wrong on the property from a range fire to rutted roads. The lease agreement also stipulated that I would be the sole person on the lease. I begrudgingly declined and still remember the last time we were on the land we had learned to love, hauling all the feeders, stands, etc., out.

This story is not unique to me; it’s a way of life for those of us that lease hunting land in Texas. A couple of decades ago, we bought a home on a few acres in an area with some very good hog, deer and duck hunting. I began knocking on doors and talking to the locals in an attempt to find a place to hunt close to home. Luckily, a fellow allowed me to hunt and fish a lease he had been on for several years. It was an outdoor paradise with tons of wild hogs that I love to hunt, lots of good fishing on 30 acres of water and some excellent duck hunting. I could jump on my electric “hunting buggy” and be hunting and fishing in a matter of 10 minutes.

The land went up for sale and a sale agreement was pending for several months. It finally fell through and, long story short, in the ensuing months, I lost the lease. For several months my stands, fish and wildlife feeders, boat., etc., sat on the place until this past week when I was allowed back on the place to retrieve all my gear.

What’s the old adage about every cloud having a silver lining? Well, thanks to my good friend Jeff Rice and his wife Demi, hunting for me in upcoming months/years will be even better, albeit it not as close to home. My friends own the Buck and Bass Ranch situated on the upper end of Lake Fork. Their land is adjacent to a large tract of Sabine River Authority land, which they have first rights to lease back each year. The place is a wonderland for hunting hogs, deer, ducks and the creek is chock full of catfish, crappie and in the early spring, white bass.

Jeff and I loaded our trucks and a trailer with all the gear off my old lease and spent a couple of days setting up stands and feeders on his land. Thank goodness for my Snap Lock Hunting Blinds. I have a couple of models, one a 4-by-4-foot and the other 4-by-6-foot. One I had it the woods for seven years, and the other for three. Made from sturdy double-walled reinforced plastic material, they both looked exactly the same as when I set them out in the woods. Once on Jeff’s ranch, it took no more than 20 minutes to have each blind setting on its plywood floor and ready to hunt from.

Of course, Jeff and I spend a little time attempting to collect some fresh pork. We had a big black boar we estimated at around 200 pounds come in to a feeder but a slight squeak from the chair I was sitting in sent him back into the brush. I won’t kid you, the move was a bit of work but it was fun work that we enjoyed combined with some camp cooking and a bit of filming of our weekly videos we call “A Sportsman’s Life.”

This will be my last moving day as a hunter. Jeff is about 10 years younger than I, and he and his wife will one day build a permanent home on the property. Of course, as an outdoors writer, I have the opportunity to hunt a lot of places with some fine folks but now I have a permanent place to hunt for the remainder of my life, and for that I am truly appreciative and thankful.

I love cooking outdoors, and through the years I have developed some standard recipes that meet my two requirements — easy and tasty. Although I often prepare these dishes at camps, they can just as easily be cooked at home.