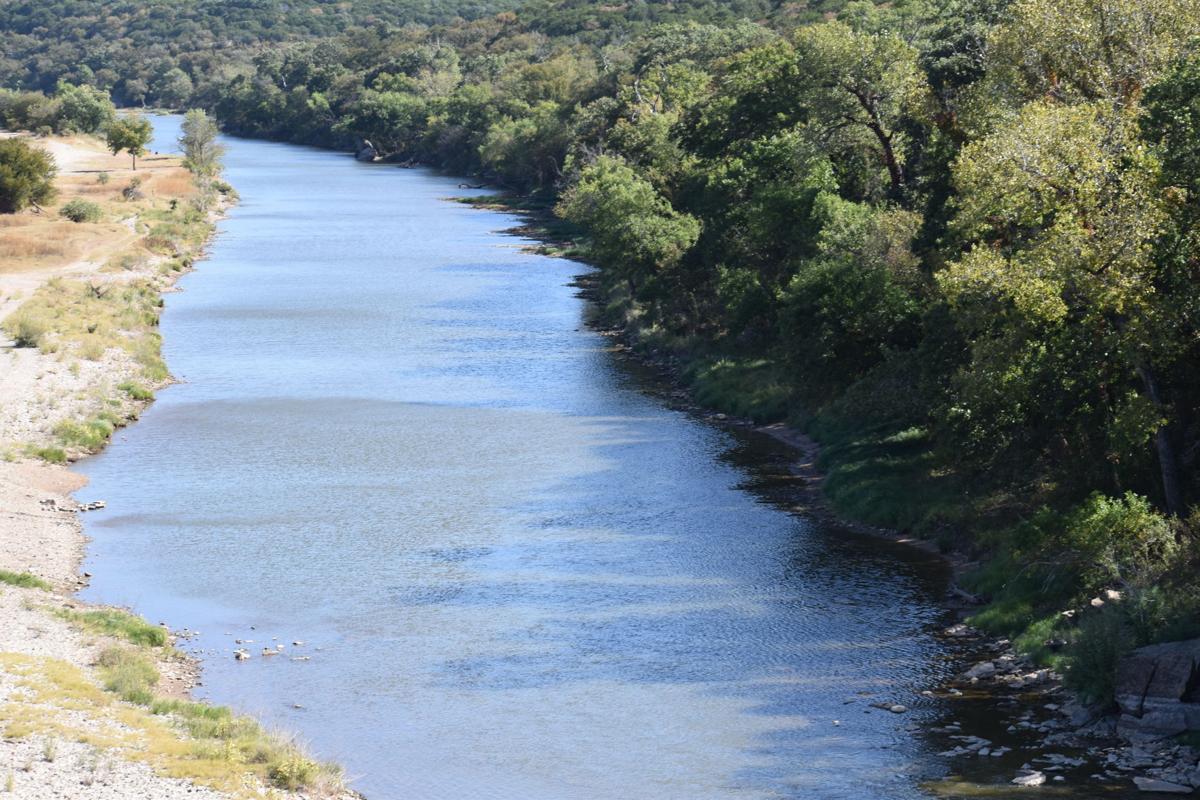 While it’s exciting to hunt other states, Texas has much to offer the sportsman. Here is a stretch of the Brazos River special to Luke Clayton. The Dale River Ranch, where Clayton has hunted often, is located on the right side of this photo, several miles downstream.

Behind me about 50 yards, I could hear the gentle gurgling sounds of water on rock as the meandering river wound its serpentine course through some of the most spectacularly beautiful country imaginable. Occasionally the tranquility was broken by the raucous squawk of a heron somewhere along the river; they have the habit of voicing their dissatisfaction of having to take to the wing to head to another spot to do their fishing.

I was sitting in a tree stand with my bow, watching a corn feeder. A couple of game trails led from the riverbed, and my anticipations were high. The silence was again broken by the deep guttural grunt of a rutting red stag. You might begin to wonder just where I was hunting, possibly New Zealand where red stags are common, maybe a remote estate in Britain somewhere? No, I was only a couple of hours from my home, hunting on the Dale River Ranch up in Palo Pinto County.

The Brazos River was behind me and ahead lay the sprawling Dale River Ranch, a piece of real estate I have hunted and fished on many occasions in the past. During the course of my three decades as an outdoors writer, I have had the opportunity to hunt and fish in many spectacular places with many fine people, on occasion on the other side of the globe. But as I sit in this tree stand on the Dale River Ranch a short drive from my home, I was thinking about all the great hunting and fishing we have right here in Texas. I truly believe a hunter or fisherman could live the course of their life and never experience all the outdoor opportunities our state has to offer.

Exotic animals, such as the red stag, that was sounding off behind my tree stand have escaped many of the game ranches through the years and now free-ranging populations have become established in many areas. Until recently, one would have to travel to a distant country to hunt red stag, but the rutting stag sounding off behind me had never seen a high fence. For many years, there has been a self-sustaining herd of free-ranging red deer along this stretch of the Brazos. Free-ranging axis deer and blackbuck antelope are now common all over the Hill Country as far as the western reaches of the Edwards Plateau.

Many hunters are not aware of the great trophy elk hunting available in the Trans Pecos area of far west Texas on private ranches. Greg Simon with Wildlife Systems recently posted on Facebook the photos of many of the giant bull elk his hunters harvested. Granted, there is no official elk season in Texas but thanks to wise management of the habitat and selective harvest, Texas hunters annually harvest some massively antlered bull elk.

Always dreamed of drawing a coveted tag to hunt sheep? Free-ranging aoudad are well dispersed over a great expanse of west Texas, and in the past decade these hardy animals have developed self-sustaining herds on ranchlands over much of north Texas. I even know of one big ranch in East Texas where a herd of free ranging aoudads has become established. Granted, aoudad are not true sheep, or goat for that matter, but they are ruggedly handsome animals, and the males have awesome horns. Plenty of opportunities to hunt them exist in Texas, and for most of us, only a few hours drive from our home.

Hunters from across the globe flock to Texas to enjoy a smorgasbord of hunting opportunities.The Muy Grande bucks of south Texas gave a giant boost to the state as a destination for trophy whitetail hunters, but even before deer hunting in south Texas became famous, the Hill Country counties of Llano, Mason and Gillespie were hotspots of deer hunting.

I remember my first deer hunt to the Hill Country in Llano county back in the 1970s. As a youngster growing up in Northeast Texas during a period when the mere sight of a deer track got the adrenaline pumping, I felt as though I had discovered the Utopia of deer hunting on that first day hunt long ago.

As my friend Larry Wishuhn, a.k.a. “Mr. Whitetail,” often says, “We are living in the good ole days of deer hunting right now in Texas.” And he’s right. Whitetail deer numbers are very high statewide and hunting opportunities abound from the national forests in East Texas to the most intensively managed ranches all over the state. Thanks to modern land management practices, great whitetail habitat can be created just about anywhere in the state. Granted, cost is always a factor that comes into play whether we are deciding a new vehicle to purchase or a place to hunt. But in Texas, we can all find a place to hunt, regardless how fat our pocketbook.

While many of us have been hunting deer with our bows for a month now, the general (rifle) whitetail season kicks off this weekend in North Texas. Here’s wishing all my fellow deer hunters the best of luck.

Contact outdoors writer Luke Clayton via his website www.catfishradio.org and listen to the archive of this week’s radio show.

Don’t misunderstand me, I like heavy-antlered whitetail bucks as much as the next hunter, but a buck’s antlers doesn’t necessarily have to score high in order to make the animal a trophy.