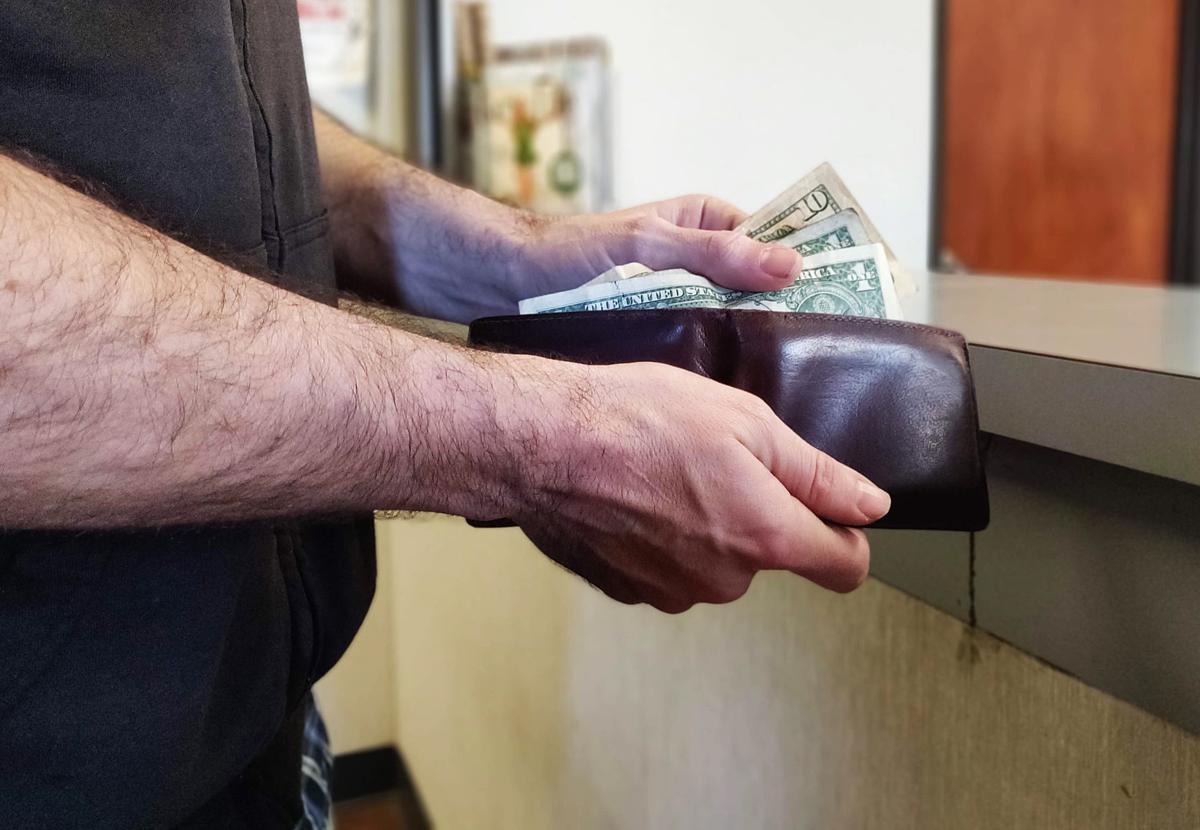 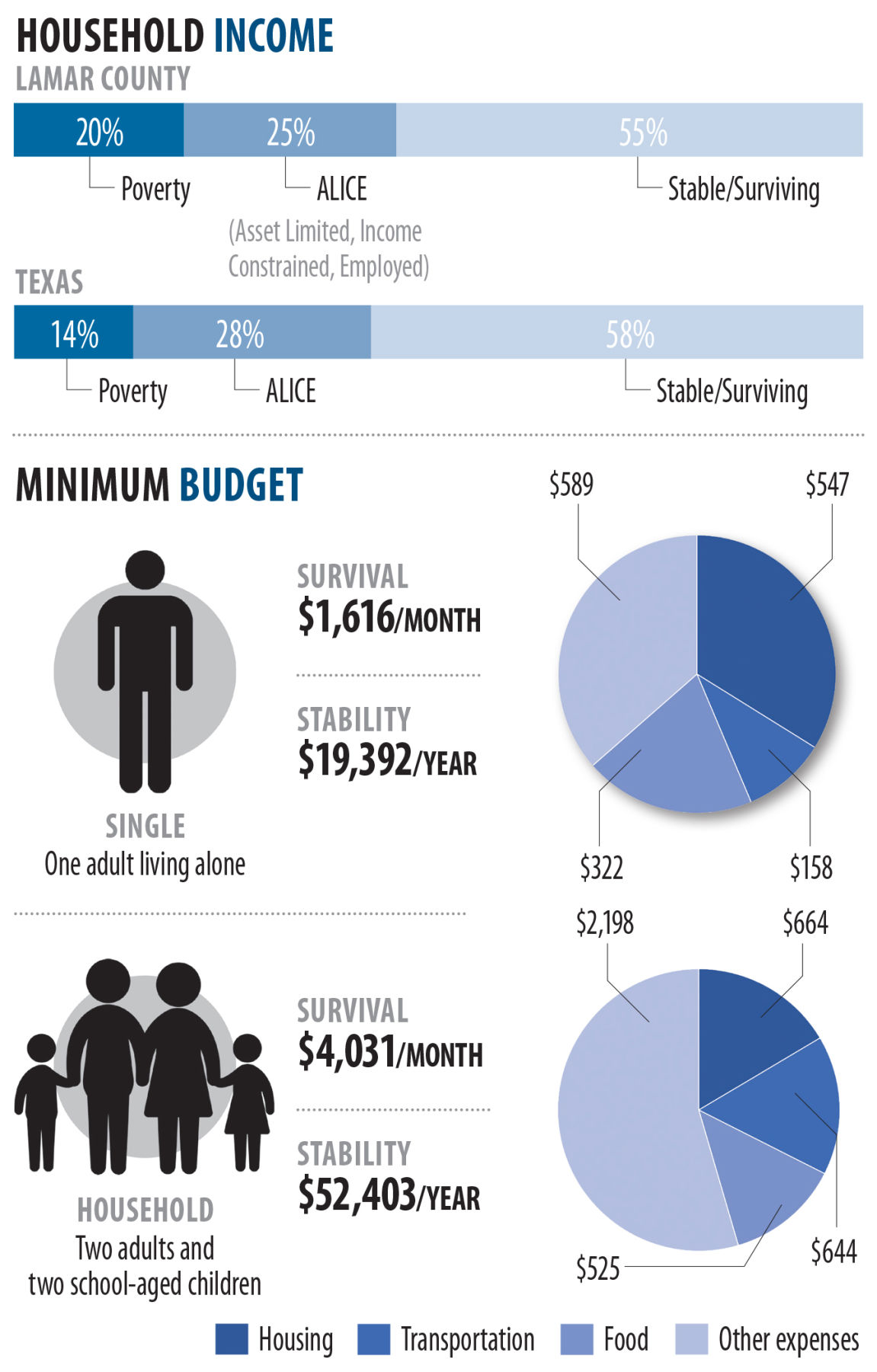 Nearly half of all Lamar County households struggled to make ends meet in 2016, according to a recently released report from The United Way.

The study aimed to assess the Asset Limited, Income Constrained, Employed population of Texas. It defined these households as those earning more than the federal poverty line but less than the area’s basic cost of living.

In 2016, 20 percent of Lamar County households were below the poverty line and 25 percent more were ALICE while the remaining 55 percent were classified as stable, the data shows.

Lamar County’s median household income was $40,283, compared to the state median of $56,565, and the county’s 7 percent unemployment rate was much higher than the state’s average of 5 percent. The poverty also was higher here, 20 percent compared to the state’s 14 percent average, according to the report. Although the report found 58 percent of Texans were stable, it also found 28 percent were ALICE.

“We all know ALICE,” United Way Executive Director Jenny Wilson said. “We see her every day. She is our friend. She goes to church with us; her kids go to the same schools. That’s why I think saying ALICE is so important. It humanizes the problem.”

In a breakdown of local cities, Roxton was found to have the highest percentage of struggling households, with 59 percent being below the poverty line or ALICE. Forty-nine percent of Paris households were ALICE or below the poverty line, with Deport coming in at 45 percent, Blossom at 41 percent, Sumner at 38 percent, Powderly at 30 percent, Biardstown at 22 percent and Howland at 19 percent.

A survival budget, as defined by the study, is the amount needed for the minimum level of housing, food, transportation, health care and child care.

“Keep in mind that doesn’t take into account anything that isn’t necessary, so no eating out, no birthday presents, nothing like that,” Wilson said. “It also doesn’t account for emergencies like car repairs, and it doesn’t include letting you save.”

According to the study, family costs increased by 27 percent in Texas between 2010 and 2016 while national inflation came in at 9 percent. In 2016, the study found costs for both single Texans and the family of four were above the set federal poverty line — $11,880 for a single adult and $24,300 for a family of four.

The costs of raising children was reflected by the higher number of poor and ALICE families than without, particularly in single parent households. According to the study, homes with married parents were much more likely to be financially stable.

Seventy-nine percent of Lamar County households in 2016 with married parents were stable, with 11 percent being ALICE and another 10 percent living in poverty, the study found. Just 36 percent of single male-headed families were stable, as 38 percent were found to be impoverished and the remaining 26 percent being ALICE. The situation for single female-led households was worse, according to the study, as majority — 62 percent — were impoverished with another 23 percent ALICE. Just 15 percent of single female-led households in Lamar County were financially stable.

“There are three big reasons I think the younger people are more likely to live in poverty,” Wilson said. “That’s job access, livable wages and a lack of education. Texas has low unemployment, but wages haven’t moved along with the jobs.”

Among the promising signs of a better future in Lamar County are the presence of large companies, according to the report.

The United Way ALICE research was started in New Jersey a few years ago, Wilson said, though this is the the project’s first year in Texas. With the data, Wilson said she hopes United Way and other local entities will be able to better address and combat local poverty.

“Lots of times, we tend to look only at the poverty level and not those just above it,” Wilson said. “This shows just how challenging it is for people to get by.”