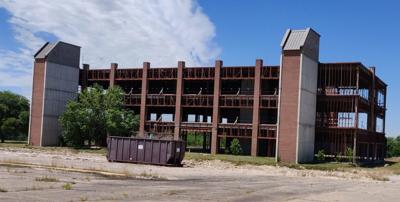 CLARKSVILLE — After years of planning and delays, preliminary work on the future Clarksville hospital is underway.

Work recently began on replacing, and in places repairing, the building’s foundation said Dr. A.J. Hashmi, who has led the push to renovate the hospital.

“You can’t just immediately do the actual construction; it needs to be reinforced before,” he said.

When the preliminary work is completed, the next phase will involve completing the mechanical, electrical and plumbing systems, said Shuja Zaidi, principal partner of the hospital.

Hashmi estimates it will be 10 to 12 months before the work is completed and the hospital will be ready to open for business. The hiring process will likely begin six months into construction to allow time for training, Hashmi said.

Clarksville has been without a hospital since 2014, when Clarksville General Hospital closed. Shortly thereafter, in the summer of 2015, Hashmi and a group of investors bought the aging structure and announced plans to invest millions of dollars to renovate it and open a full-service hospital with a 24/7 emergency/trauma center and cardiac care center.

When the hospital opens, Hashmi clarified he will not own it, but will be a part of the managerial team.

Having a local hospital also means the city will be more likely to retain its two nursing homes, Clarksville Nursing Center and Focused Care at Clarksville, Williamson said.

Perseverance was key to getting to this point, Hasmhi said, saying he faced multiple roadblocks in trying to get the project started.

Hashmi spent years working and reworking the paperwork for the hospital’s financing and construction, even hurdling the challenge of a bank closure. The first round of paperwork took six to seven months to complete, but when it was done, the bank they were working with closed down. Its purchasing bank declined to help with the project, which sent it back to square one.

In July, and then again in September, the start of construction was pushed back when changes needed to be made to the plans. Hashmi said the root of the delay was a need to keep up with changing building codes.

Once the preliminary work is complete, the hospital will host an official groundbreaking.

Construction on the planned Clarksville hospital was slightly pushed back due to alterations to the plans. Mayor Ann Rushing said she is unsure what the changes are, but she did say they don’t substantially change the overall design.