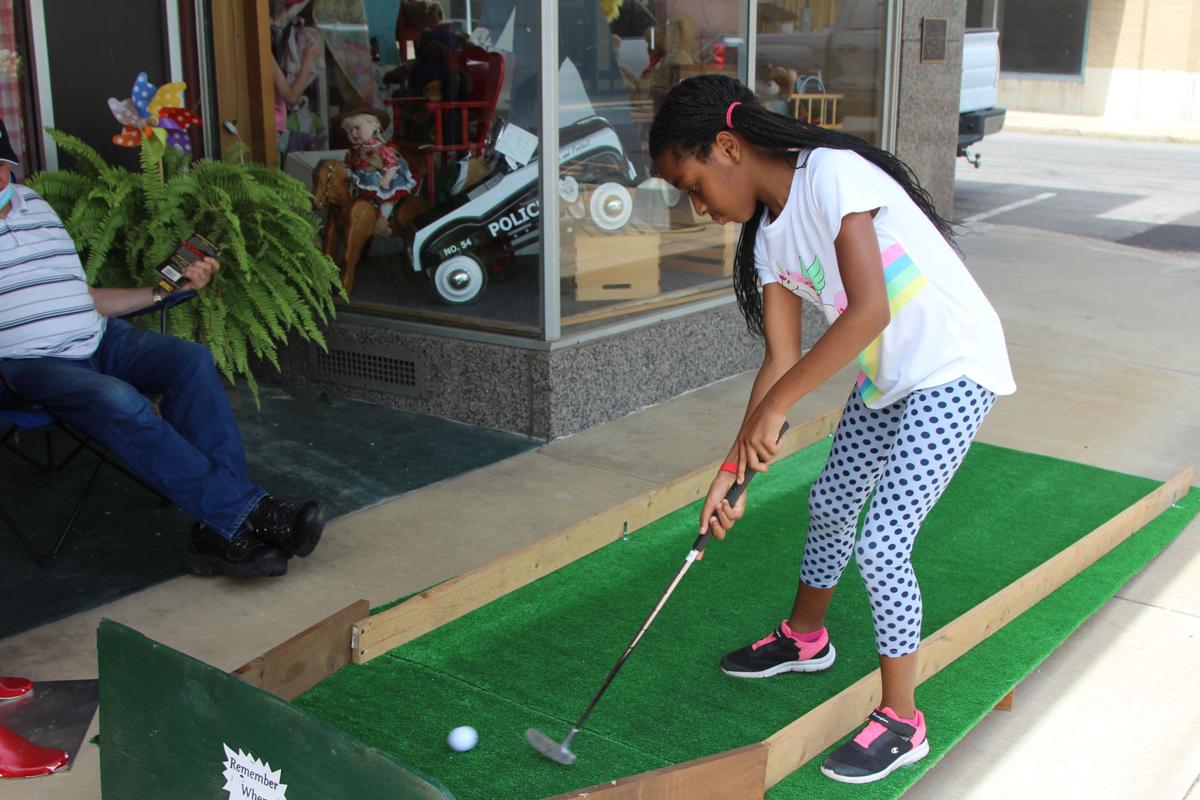 Amara Chira hits her ball into the Remember When mini-golf hole Saturday afternoon on the square. 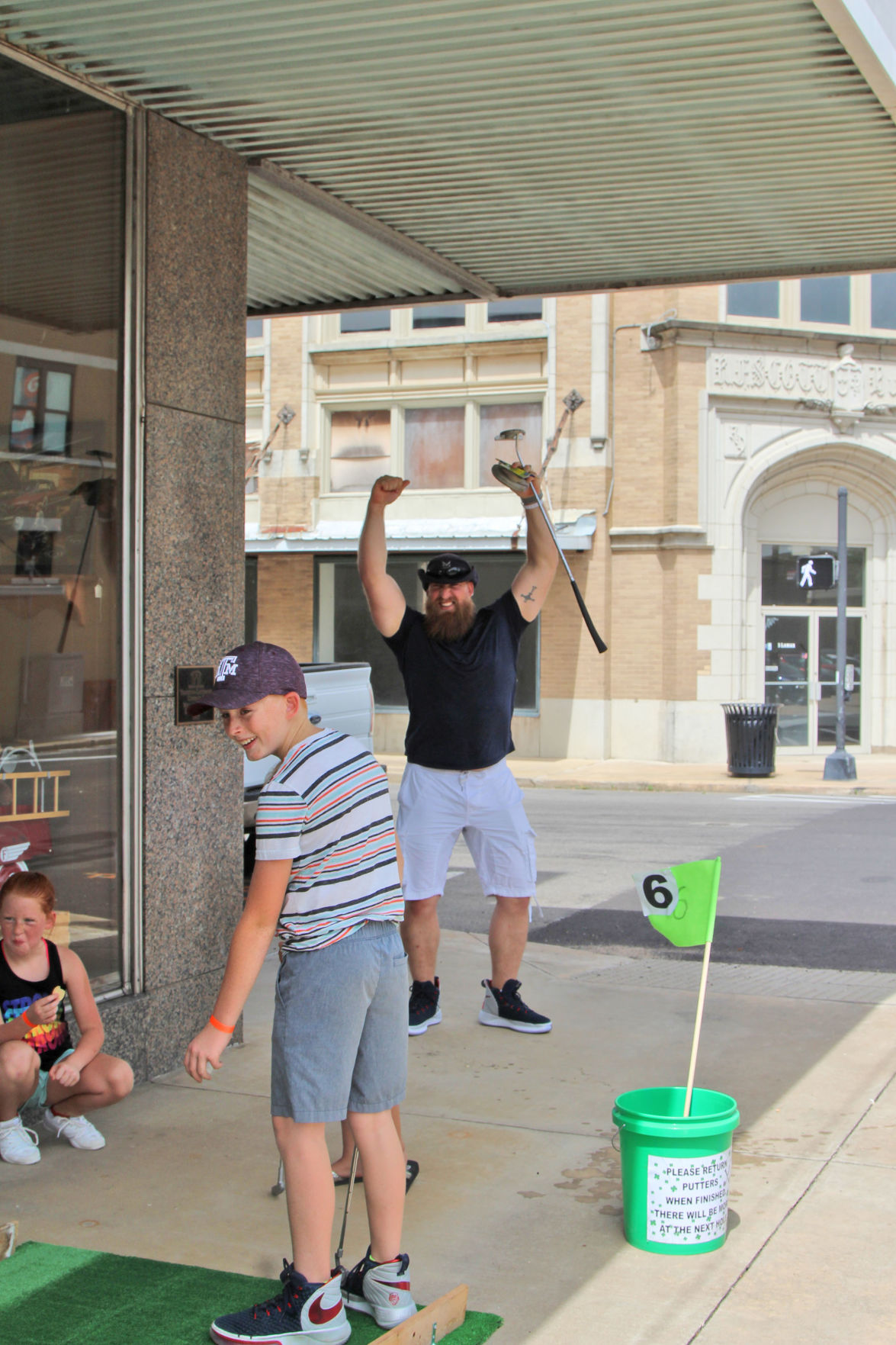 Bradley Gordon Bedford celebrates in the background after Addison Bedford putted her ball into the hole. His son, Gregory, steps up for his turn Saturday afternoon. 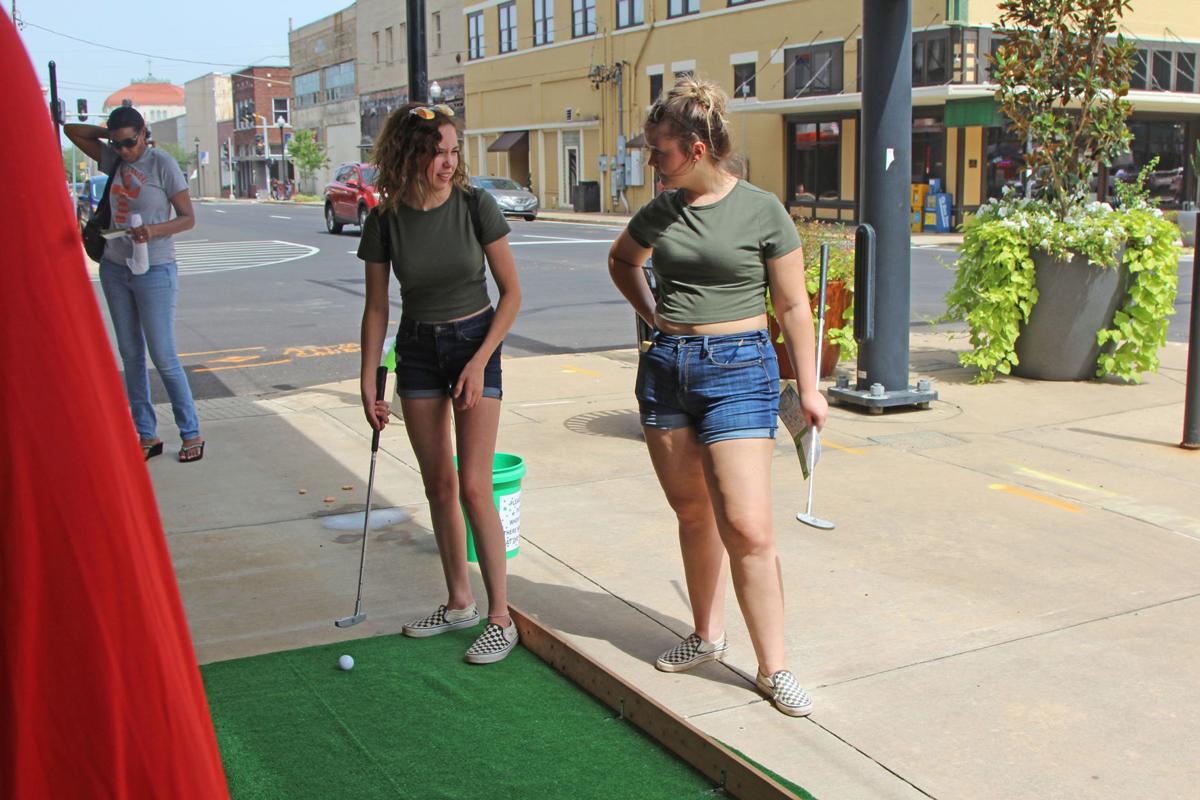 Lucy McDowell, left, asks Emmelie Bivens what she thinks her score will be Saturday afternoon on the square in Paris.

Amara Chira hits her ball into the Remember When mini-golf hole Saturday afternoon on the square.

Bradley Gordon Bedford celebrates in the background after Addison Bedford putted her ball into the hole. His son, Gregory, steps up for his turn Saturday afternoon.

Lucy McDowell, left, asks Emmelie Bivens what she thinks her score will be Saturday afternoon on the square in Paris.

Heat, a pandemic and even rain couldn’t keep the golfers away as people circled the square for the 2020 Downtown Paris Mini-Golf Challenge.

“We’ve had a really good day,” Main Street Coordinator Cheri Bedford said. “We had around a hundred family groups.”

This year the event had 15 holes scattered outside of businesses in and around the square, each with its own theme. The hole outside of Tresors de Paris featured a mini Arc de Triomphe and Eiffel Tower. Another whole featured small bits of greenery and a water feature golfers had to putt around. Remember When had golfers putt an uphill battle.

The businesses each competed for the best miniature golf hole, with the winner being South Main Iron, Bedford said. Their course had artfully curved tires looping around the course and a slightly raised green near the hole.

“We didn’t have the

Outside of Remember When, Jim Coker and his wife watched putters face off against his uphill course.

“We’ve had maybe 10 hole-in-ones,” he said. The heat had him sitting under the awning of his store. “I’m getting air fried right now, like the machine in my kitchen.”

Initially, it didn’t look too good for the event, with a downpour of rain starting right before the event on Friday night, but afterwards, people got out and played, according to Ashley and Misti Nicholson.

“There were a few, not as many as today,” Ashley Nicholson said.

“It’s been a pretty good event,” her sister said, while both helped at the registration table

Tickets were $5 per person, with children 13 and under playing for free, and $1 from each ticket will go to the Downtown Food Pantry, Bedford said.

“A lot of people gave donations as well,” she said. “The business also paid a fee (to enter their course) and everyone donated it back to the pantry.”

She didn’t have a tally yet, but said they would have a large donation to the organization.

North Texas Food Bank and the Texas National Guard again visited Paris, in a joint attempt to help those in need during the Covid-19 crisis.