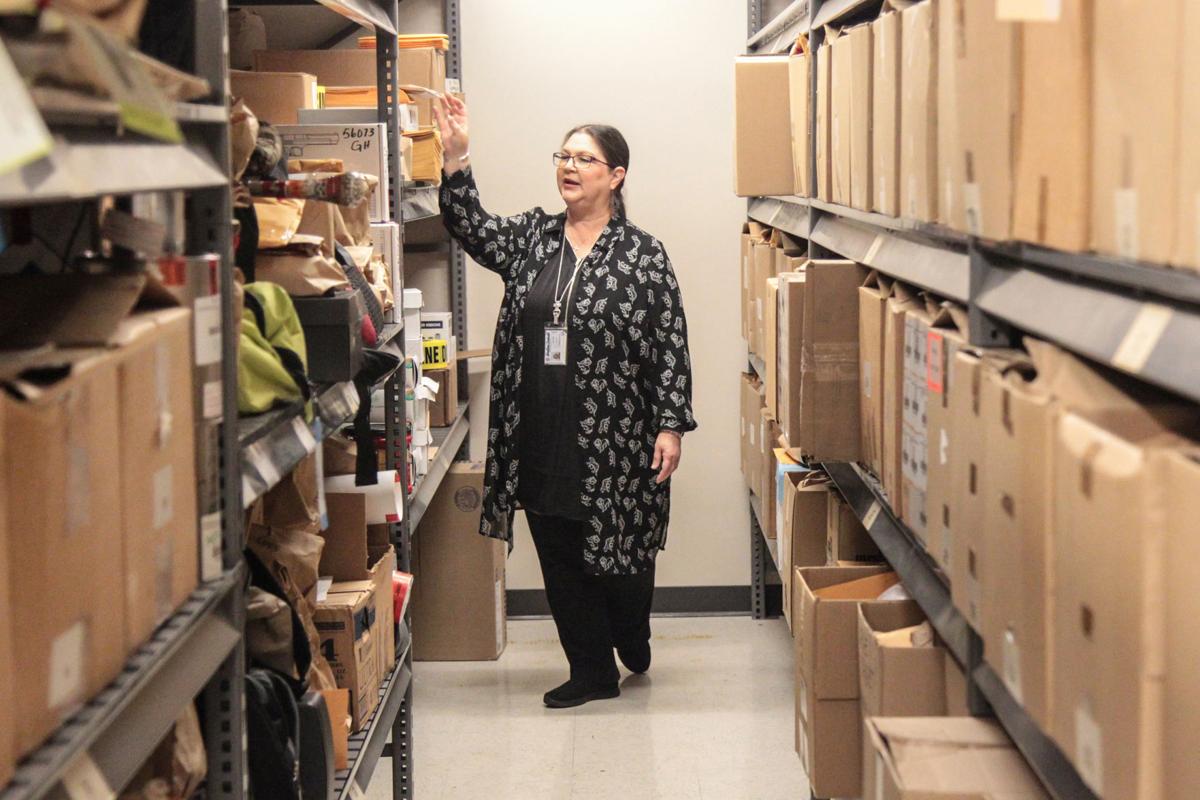 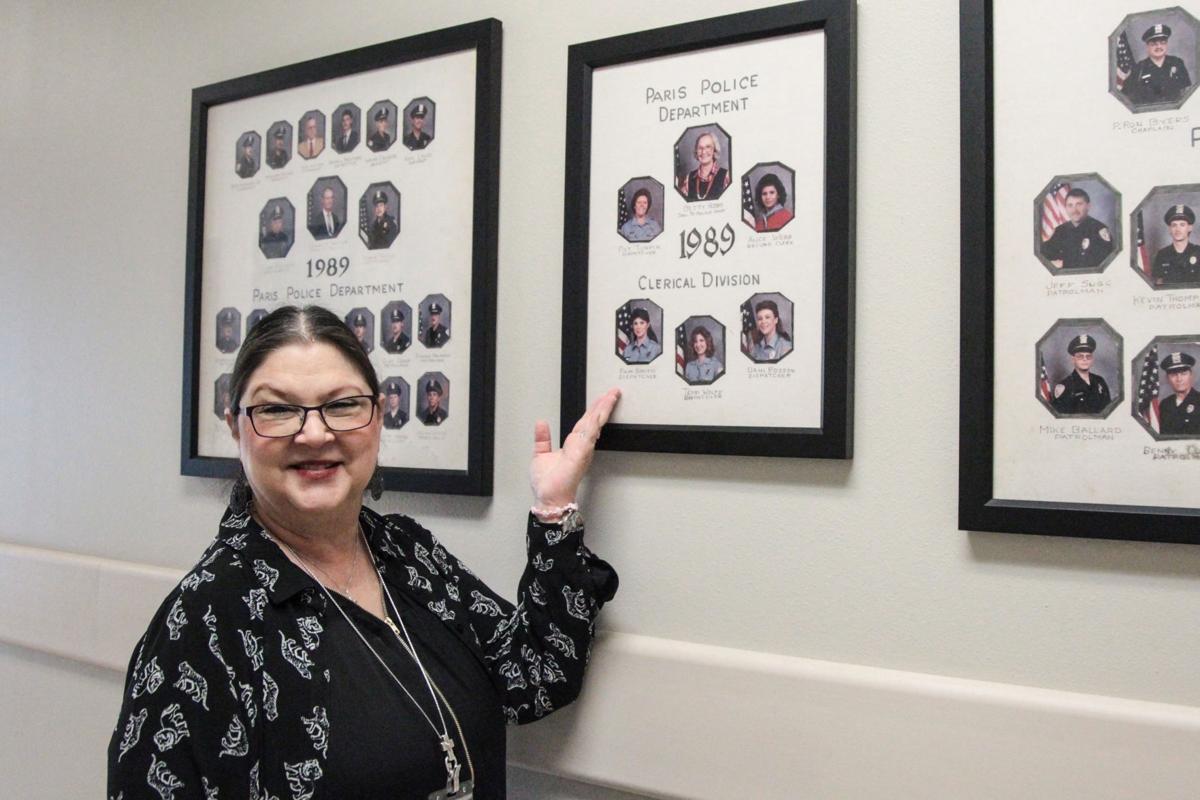 Evidence Technician Pam Key points out a photo of her when she first started at the Paris Police Department as a Dispatcher. 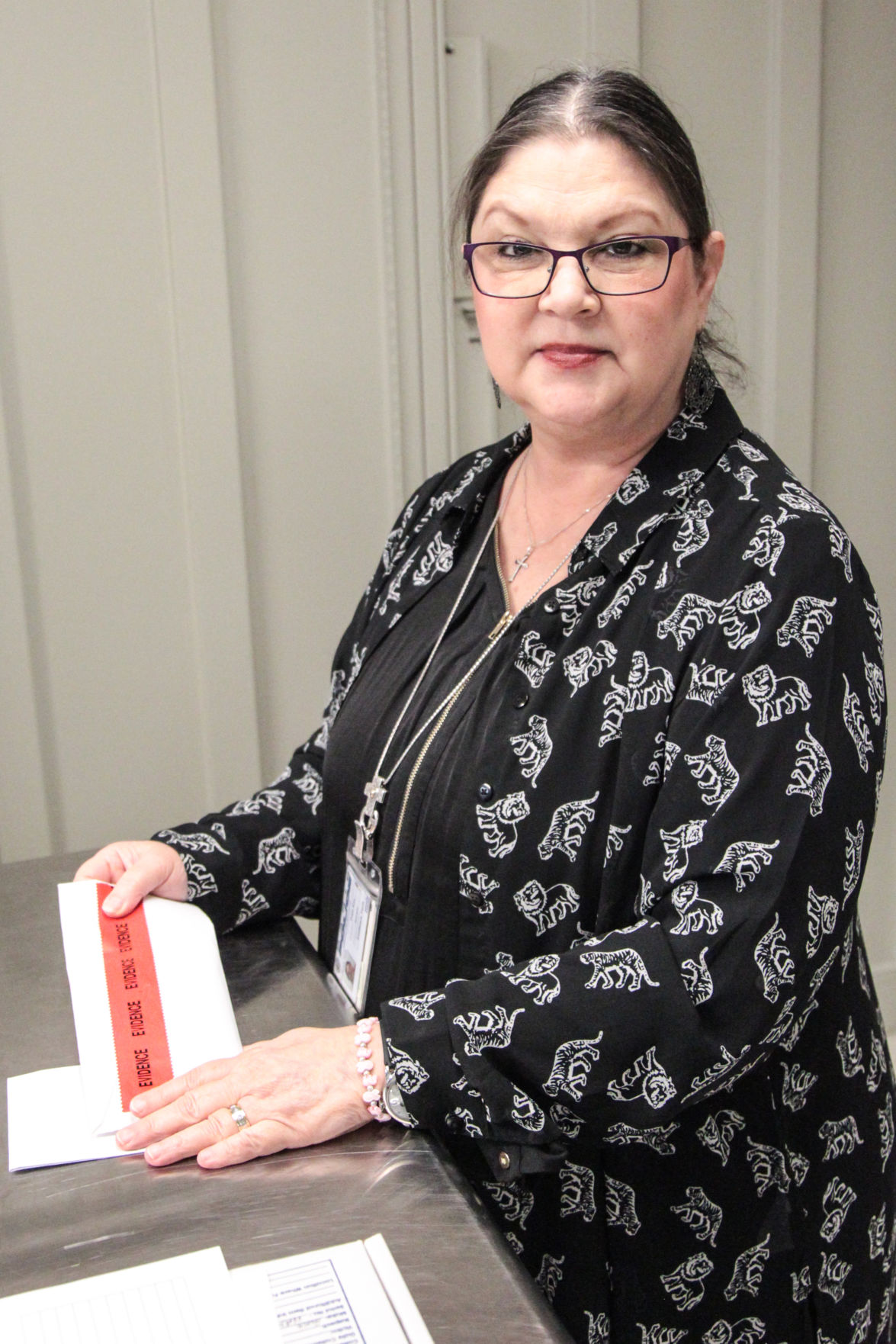 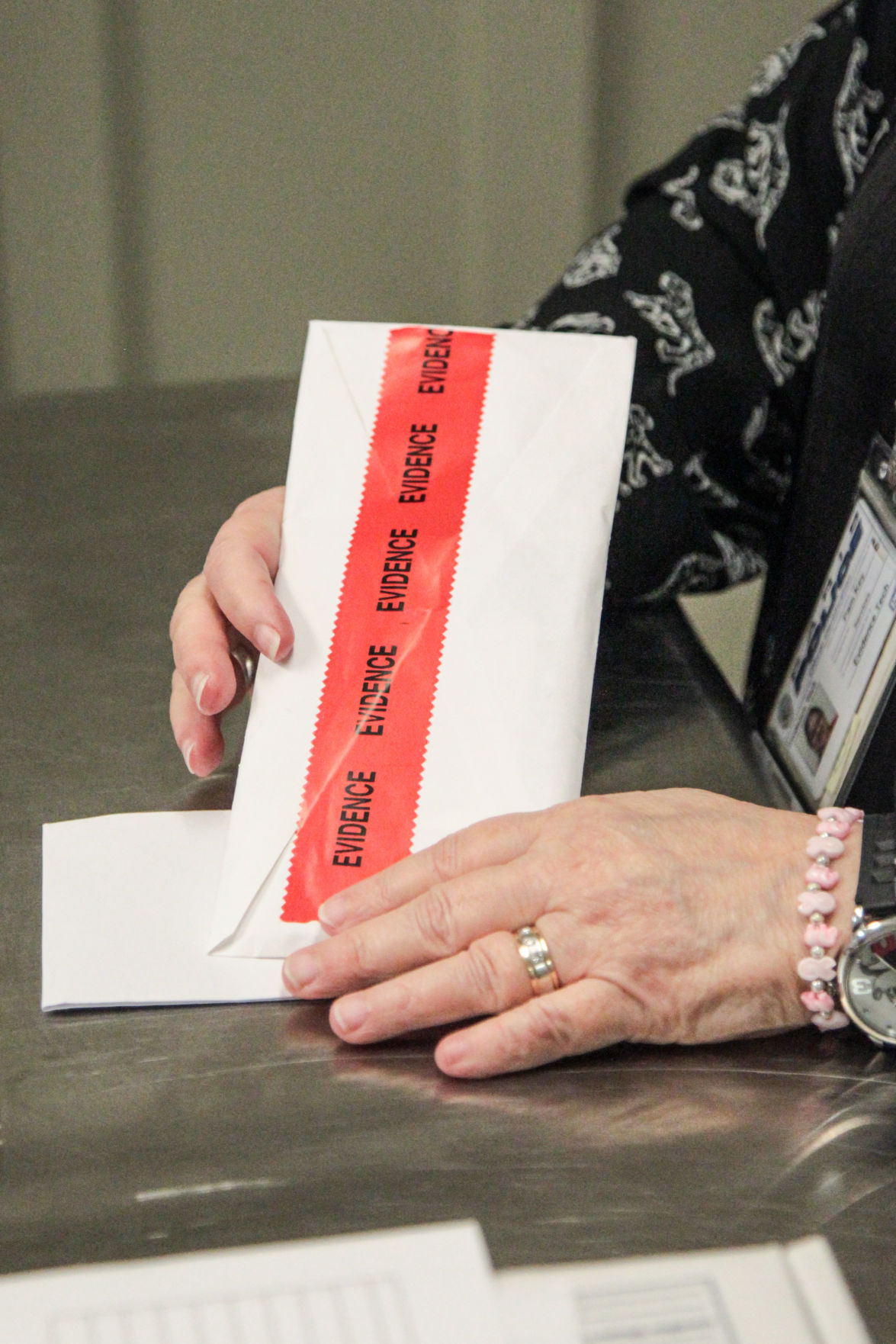 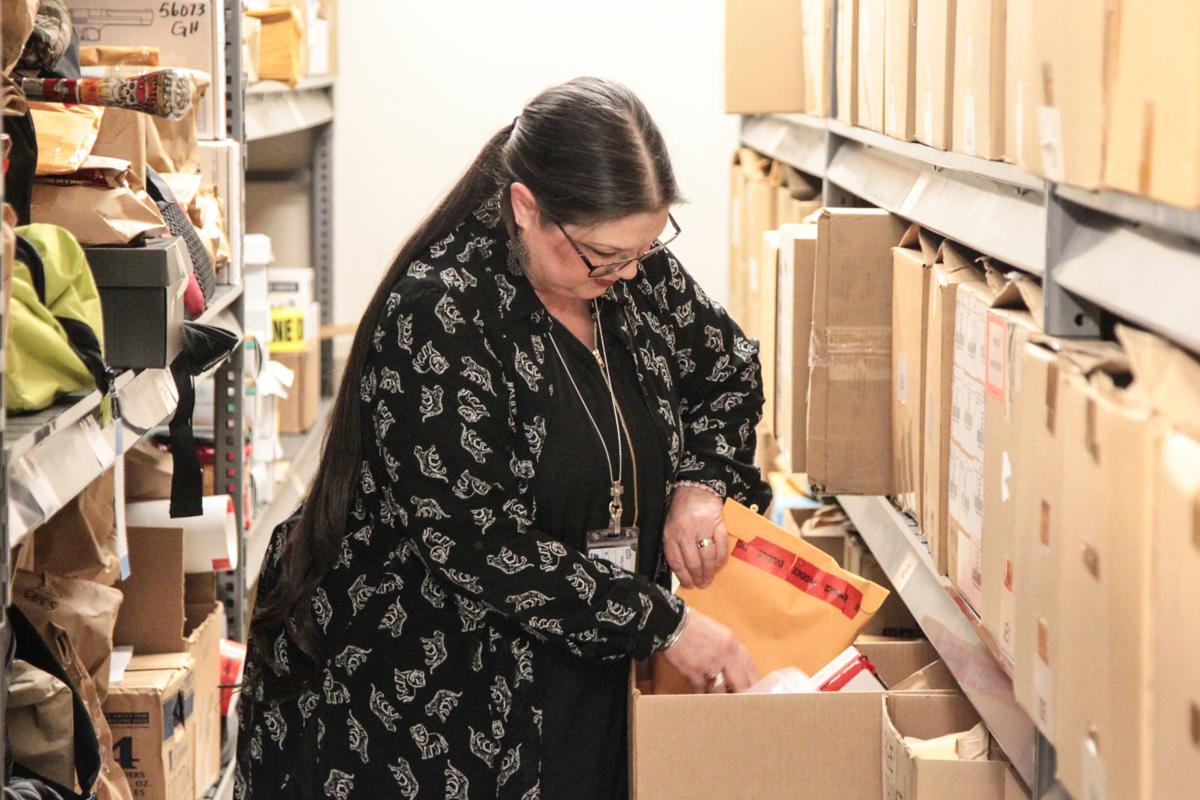 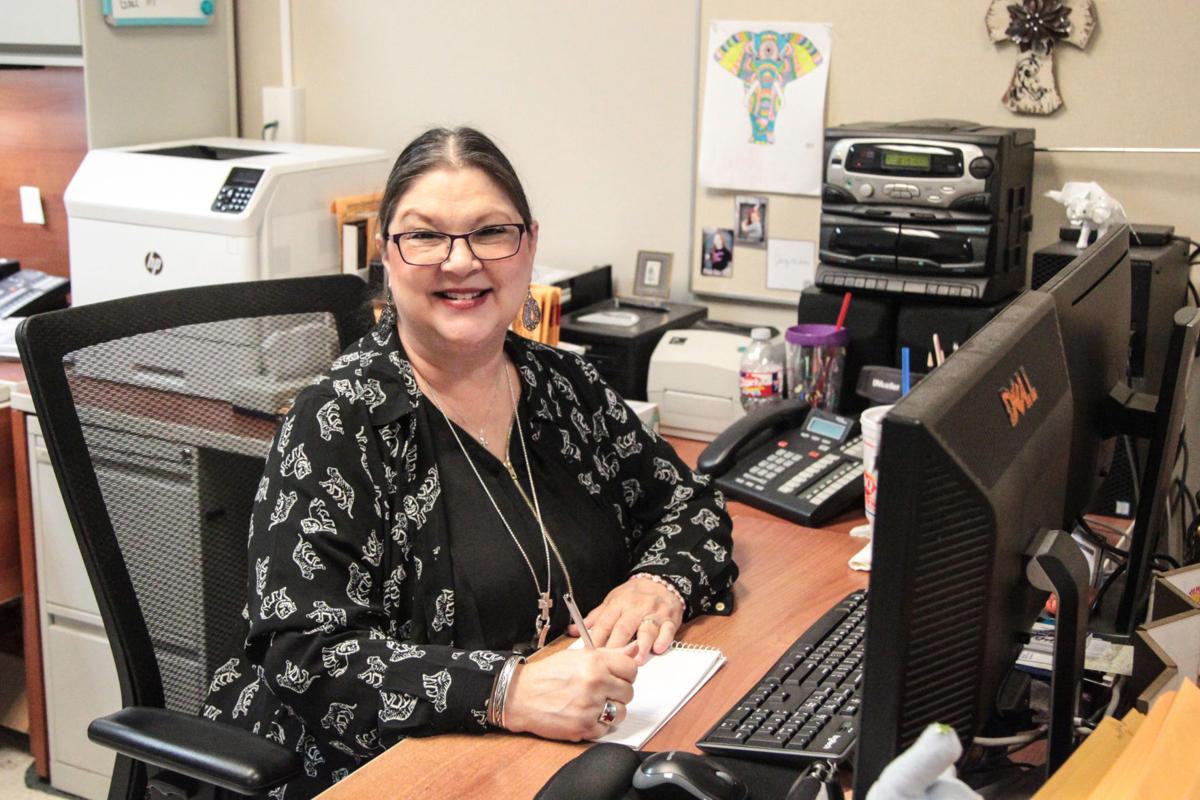 Evidence Technician Pam Key sits in her desk at the Paris Police Department.

Evidence Technician Pam Key points out a photo of her when she first started at the Paris Police Department as a Dispatcher.

Evidence Technician Pam Key sits in her desk at the Paris Police Department.

Pam Key is a soft-spoken woman with an easy smile and a long ponytail, her trademark feature. When she walks, she seems to sail along gracefully with an air of quiet confidence. But her pleasant nature and kind smile do nothing to hinder her from her tough-as-nails job: she’s an evidence technician for Paris Police Department, and she’s seen it all.

A quick trip through evidence proves she knows the story behind many of the items, for better or for worse. Everything from bricks to VHS tapes sit on the shelves, neatly filed and labeled. Some evidence from open cases remains shelved for years, even decades. But the most puzzling piece of evidence she and her partners have come across is yet to be beat: a belly dancer’s chain outfit, complete with tiny coins. That’s puzzled her and her co-workers, Jennifer Bacorn and Beverly Phillips, for hours.

“We have all sorts of things back here. We have evidence back here from the ’60s,” she said. She gestures toward a black microwave deposited on a trolley behind her, buttons smudged with a light dusting of powder.

“That was used to cook cocaine,” she says, wrinkling her nose slightly.

Key began working for the police department in 1977, starting as a meter maid and then moving to dispatch. She worked in communications before 911 existed in Paris and was present for its inception — a big step for the city, she said.

“It made a world of difference in everything the department had to do as a whole because it helped you find your people when they couldn’t tell you where they were,” she said.

In 1998, Key moved to central Texas and worked for Cedar Park Police Department as a unit supervisor. But she returned to Paris in 2004, working in records, handling police reports via phone and then working in evidence.

“You could probably say I’ve been in every branch of the police department other than a police officer or detective,” she said, laughing. “But it’s a well-rounded career, and I’ve loved every department that I’ve ever been in. And to me, this is like home. It’s family.”

Beneath a printout tacked to the bulletin board that declares, “It’s a beautiful day at property and evidence department and continuous soiree,” Key goes through her “valentines” for the day — evidence deposited by officers and detectives into large metal lockers. Evidence is packaged and stamped with a barcode, tracked through a computer catalog along with case reports and officer information. The department tries to maintain a 1:1 ratio, where if one case goes in, one goes out. But it’s difficult to keep up, Key admits.

Evidence is shelved until the case goes to trial, is rejected or dismissed, or the statute of limitations runs out. Then, the department sends a letter to the district attorney with a list of case items, requesting the approval of evidence destruction.

“Really, we’re with a case from start to finish,” Key said. Bacorn and Phillips agreed.

The department is also charged with reviewing body camera footage and video evidence. Everything the officers do and see in the field, the technicians see, too — including things Phillips said she will never forget.

“I’m still not desensitized to it, and I don’t know if I ever will be. Or if I even want to be. But if it’s hard, we talk about it,” she said.

In a largely male-dominated profession and department, the women hold their own. They see many of the officers and investigators they work with as their sons, and in return are always treated with consideration and respect, they said.

“If I need to be professional, I will be. But to me, life is too short to be serious all the time,” Key said. “This department is like my family.”