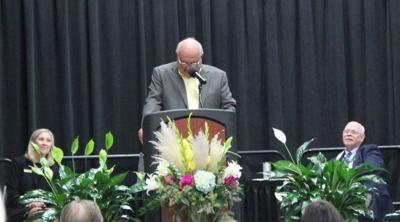 Paris Junior College celebrated a pair of lifelong friends at its annual distinguished alumni luncheon, calling the pair lifelong advocates for education, the college and Paris itself.

As the college’s 95th homecoming festivities commenced, Saturday afternoon the school posthumously honored Class of ’63 graduate Tommy Townsend and Class of ’64 graduate Barney Bray III as this year’s distinguished alumni, citing their pals’ friendship, cemented at the college, and their respective histories of supporting the college and the Paris area. Both men died in 2018, almost four months apart.

Townsend, who went on from the college to become a lawyer and work for the Texas Senate, was at ease with everyone, Gant said.

“He was able to communicate with the cashier at the grocery store and the most influential people in the state of Texas,” Gant said. “He had a unique ability to talk to people … and see the beauty inside.”

Gant shared stories about how Townsend quietly helped a lot of people from his hometown.

And Townsend privately funded many more Lamar County students, offered help for first-time job hunters and made many connections between Paris and Austin, Gant said.

“If you have one good friend, you have the world, and I had two, and I miss them both,” he said.

Members of Townsend’s family thanked the college for the honor, and Townsend’s son, Justin, said it was fitting both friends were honored.

“Bray and my father were life-long friends, and it seems fitting they are co-honorees,” he said. “My father loved Paris and loved Paris Junior College in particular. It was some of the happiest years of his life.”

David Glass spoke about his friend, Bray, at the lunch, talking about his passion for the land and ranching and his friends and family.

“He had an overall love for the land,” Glass said. “It was a great joy for him to spend time with his friends. He loved his community and the people in it.”

“He prided himself on giving quietly to his community,” Glass said.

Josh Bray spoke for the family, saying the Brays and the college have “deep roots,” and paraphrased John F. Kennedy encouraging everyone to ask themselves what they can do for their communities.

Take a classic 1960s sitcom set on an uncharted desert isle, mix in more than a dozen original songs and nearly a dozen stage actors and what have you got? “Gilligan’s Island: The Musical,” opening tonight.