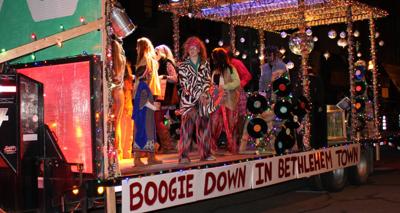 This year’s theme was Christmas Decades in celebration of the decade anniversary hosting the parade in downtown Paris.

The overall winning float, Christian Fellowship Paris (CF Paris), went groovy with a take on a ’70s theme that connected with the crowd. It was the organization’s fourth year participating in the parade, according to Brandon Farr.

“Our church family gets together and makes it happen, and it’s great fun,” he said.

Their float featured iconic ’70s music such as “Stayin Alive” by the Bee Gees, and the dancers on the float were decked out in the style and dress of the time.

“I think so far this is my favorite because I could pull in the ’70s,” Farr said with a laugh.

Britney’s Steppin’ Out Dance Studio, the organization that won the overall float award in 2016, put up quite a show this year as well. They’ve been in the parade for five years, Britney Drake said.

“I think my favorite theme was the smile one,” she said, referencing a theme that recognized the 100 year anniversary of a fire that destroyed downtown Paris. “And it wasn’t because we won or anything like that. It was a memory of something that actually happened in Paris. We were going through the anniversary of that, and I know that was tragic happening to Paris, so I think that one was close to heart.”

Every year, the community bonds through the parade. Hundreds came out Saturday night with their children to celebrate the upcoming holiday with flashing lights and decorations.

“I come up Lamar Avenue, and it is the biggest crowd that I’ve seen,” said Precinct 3 Constable Steven Hill, a parade participant, prior to the parade. He added that everything usually runs smoothly, and he didn’t think they had ever had a problem with the parade.

However, the festive mood sobered when a woman broke her ankle in a trailer mishap. That woman was with the CycleWorks Paris parade float, and as she was talking with someone in the crowd, she got too close to the wheels of the trailer, said Bradley Hilliard from the company. The trailer wheel rolled over her foot and broke her ankle. The woman was taken by ambulance to a local emergency room, where Hilliard said she was in good spirits. The incident happened on Lamar Avenue, between Liberty National Bank and the First United Methodist Church.

“The ambulance was there in a split second,” Hilliard said. “They must have been right around the corner because it didn’t take them no time to get there.”

After ensuring the woman was taken care of, CycleWorks went on to finish the parade. Aside from the injury, the annual Christmas parade was a huge success. Charles Grissom, Paris High School band director, led the high school’s marching band in the parade.

“It’s only a couple of times a year that there’s this community, and really, you just get everybody. It doesn’t matter where you’re from. Everybody’s always happy to see you,” he said.