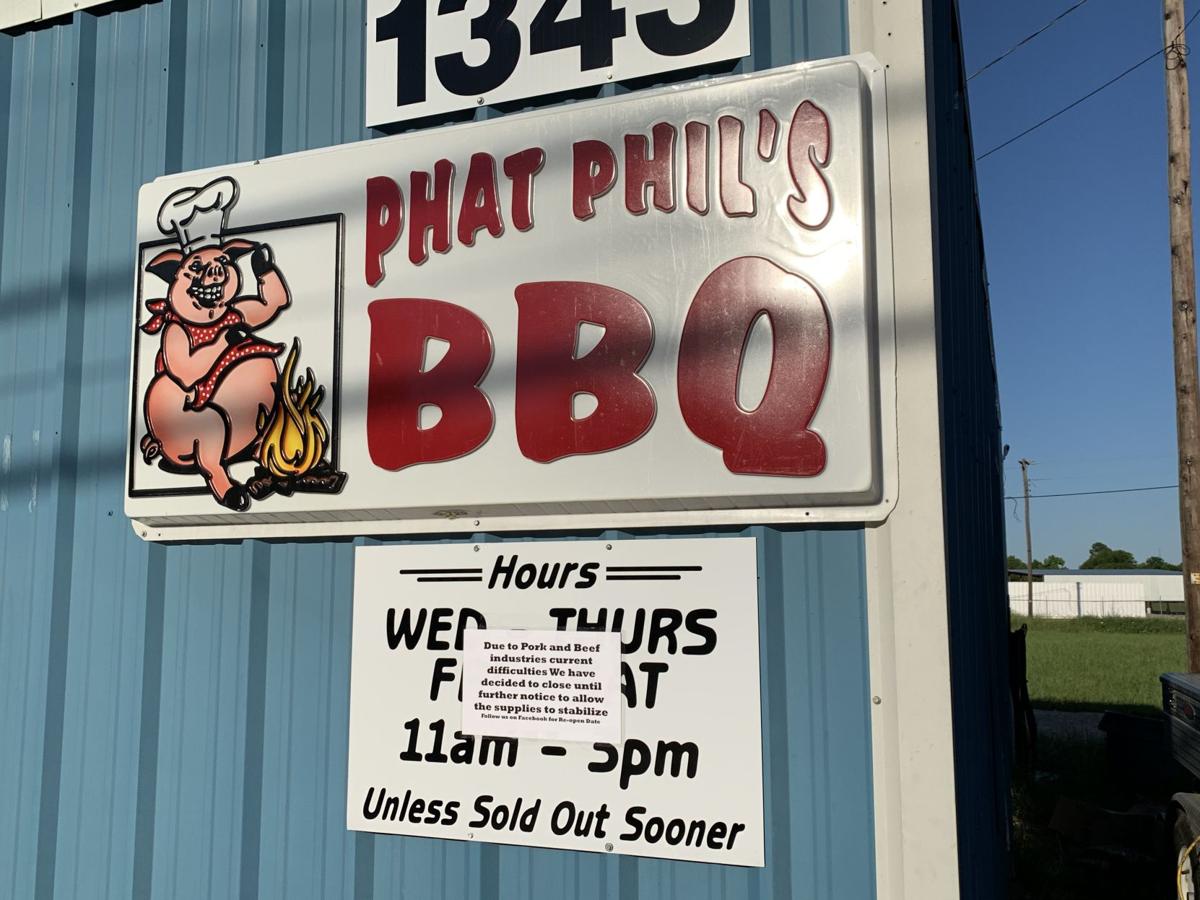 A sign over the hours of Phat Phil’s BBQ in Paris tells customers the business will be closed until further notice due to issues with its meat supply. Covid-19 has disrupted the national meat supply chain as outbreaks are happening in large processing facilities. 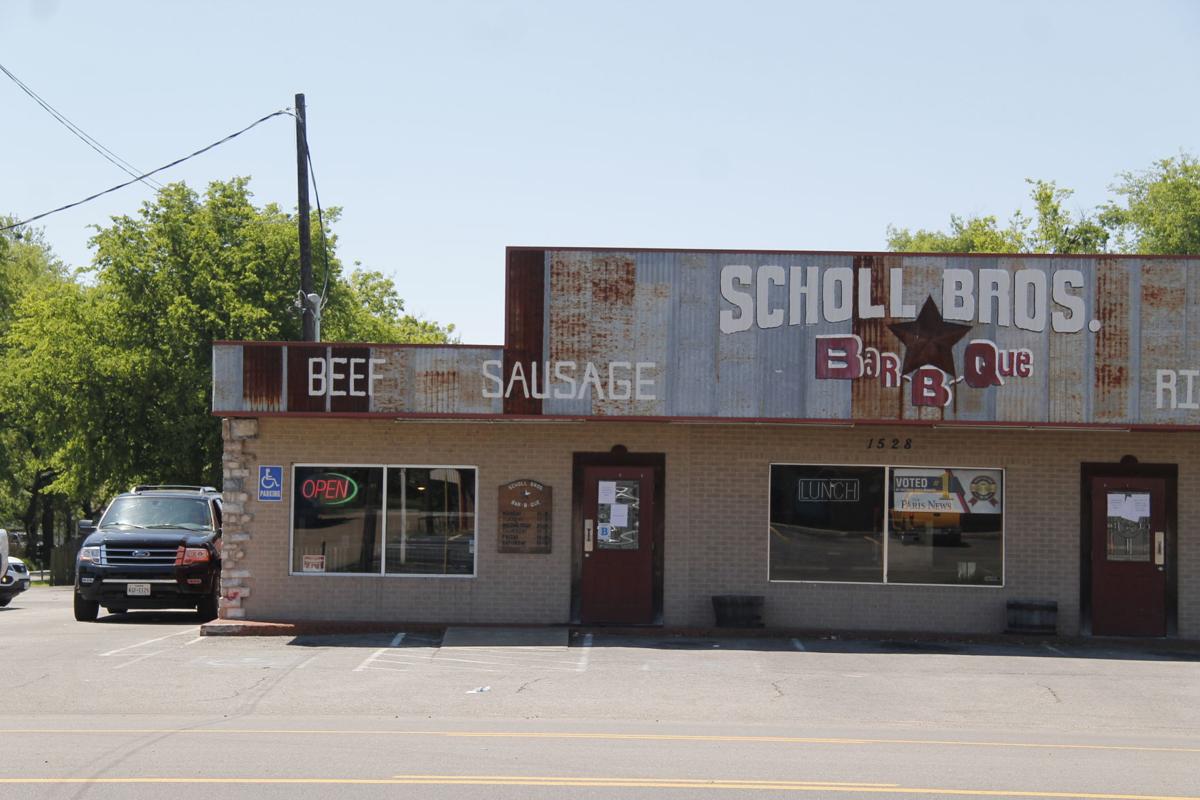 Local restaurants like Scholl Bros. Bar-B-Que continue to serve customers through their drive-thru windows after state and local declarations required them to close dining rooms. The Lamar County Chamber of Commerce has introduced a new program to encourage residents to visit member restaurants.

A sign over the hours of Phat Phil’s BBQ in Paris tells customers the business will be closed until further notice due to issues with its meat supply. Covid-19 has disrupted the national meat supply chain as outbreaks are happening in large processing facilities.

Local restaurants like Scholl Bros. Bar-B-Que continue to serve customers through their drive-thru windows after state and local declarations required them to close dining rooms. The Lamar County Chamber of Commerce has introduced a new program to encourage residents to visit member restaurants.

Troy Scholl, owner of Scholl Brothers Bar-B-Que, is caught between a rock and a hard place. Does he raise prices on his food to contend a dramatic rise in supply price or does he try to absorb it?

“The price on the briskets that I buy jumped 120% between Friday and Monday...” Scholl said. “Hopefully this is just a temporary deal because I believe if this goes on for two or three months, I don’t think that there’s a barbecue place that will be able to stay in business.”

Restaurants in Texas were allowed to reopen their doors to the public on May 8, welcoming customers at 25% capacity. Those that decided to reopen their dining rooms gave a sigh of relief after only being able to offer take-out or curbside service for weeks. Now comes the next challenge: accessing the very product they need to serve customers — meat.

Scholl isn’t paying more because the quality of his meat suddenly went up or because he’s buying different products — it’s because there’s simply not enough consumer-ready meat to go around. Just like many other industries, this is due to Covid-19.

A report by the Centers for Disease Control and Prevention showed that more than 4,900 workers in the meatpacking industry have fallen ill. According to The New York Times, at Smithfield alone, more than 400 workers in the South Dakota plant tested positive for Covid-19. It was temporarily shut down. As one of the largest pork processing plants in the country, the industry took a hit. As a result, a U.S. Department of Agriculture report in April showed beef production was down 25% compared to last year, and pork was down 15%. With production tanking, prices have soared and access is limited.

With meat processing plants facing a shortage of help as employees fell ill, President Donald Trump on April 28 issued an executive order to keep them open. Using the Defense Production Act as justification, Trump classified meat plants as “essential” businesses. Despite the order, many plants have remained shuttered because they simply don’t have enough workers to continue production. They also lack the equipment to keep workers safe.

In an interview with USA Today, Olga Isengildina-Massa, associate professor at the Department of Agriculture and Applied Economics for Virginia Polytechnic Institute and State University, said the lack of workers has created an “hourglass effect.” There is high demand on the top, the consumer side, and high production on the bottom, the farming side, but the middle, the processing side — which makes meat ready for consumption — can’t keep up. What makes consumer demand for meat even higher is that some people have begun hoarding meat, creating a shortage at grocery stores, similar to, but not as severe as, earlier shortages of toilet paper and sanitizer. In an effort to stop shelves from going empty, grocery chains like Kroger and Aldi have started limiting the number of meat products each shopper can buy.

Runnels said he had placed an order with his regular distributor, but when it came time for delivery, they couldn’t fulfill it because they didn’t have enough product. So he turned to local stores to fill the gap, but found they couldn’t help either.

“I bought from Brookshire’s, I bought from Walmart, I bought from Kroger’s — and those guys started running out and started putting limits on what you could buy,” Runnels said. “So any one day for me, I never knew if I had enough product to cook for the next day or not.”

He said he doesn’t blame his distributor for not being able to follow through on his order. Runnels understands there isn’t enough consumer-ready meat to go around so there’s little they can do. Scholl offered him some help, giving Runnels the contact information for his distributor. Thankful as Runnels was, he said as a smaller business, he just couldn’t afford the prices they were offering.

“I want to give kudos to Troy Scholl because he was extremely nice to help me,” Runnels said. “He put me in touch with his supplier who had plenty of meat, but the price is in a range that I just can’t handle. I’m just small enough and my margins in my business are tight enough that I just can’t make that move.”

Runnels made the difficult decision to temporarily close his restaurant and take some time to reevaluate whether it’s worth continuing to operate while meat prices remain high and access is limited. Both he and Scholl are hoping meatpacking plants can safely get back to business so they can too. Until then, and if Runnels reopens Phat Phil’s, they may both have to raise prices, but hope that their customer bases will be loyal enough to absorb the increase. When meatpacking plants can find ways to effectively protect their workers, like providing personal protective equipment or installing plexiglass dividers, this may all blow over, but for now it’s a waiting game.

Julia Furukawa is a staff writer and advertising representative for The Paris News. She can be reached at 903-785-8744 or at julia.furukawa@theparisnews.com.

Child care opens immediately, bars can open Friday and sports will be allowed to return at the end of the month, Texas Gov. Greg Abbott announced Monday.