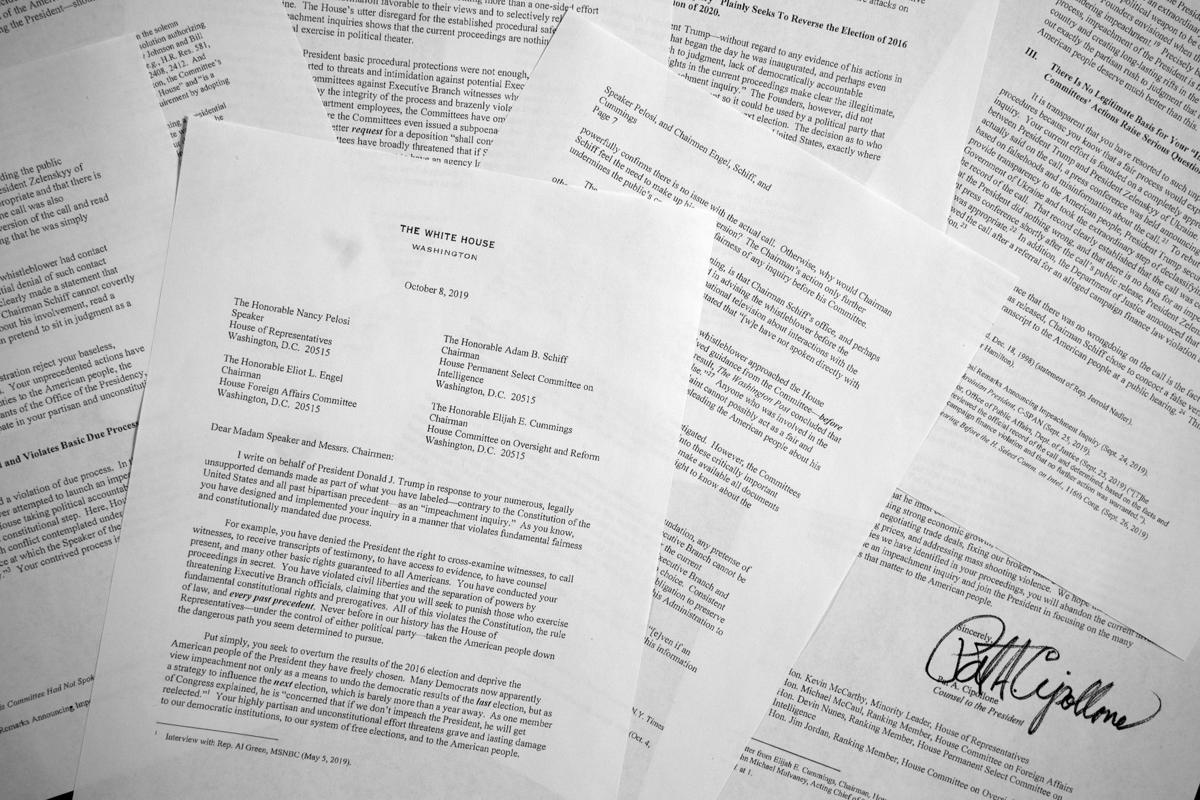 A letter from White House counsel Pat Cipollone is photographed in Washington, on Tuesday, Oct. 8, 2019. The White House declared it will not cooperate with what it termed the "illegitimate" impeachment probe by House Democrats, sharpening the constitutional clash between President Donald Trump and Congress. Trump attorneys sent a letter to House leaders bluntly stating their refusal to participate in the quickly moving impeachment investigation. 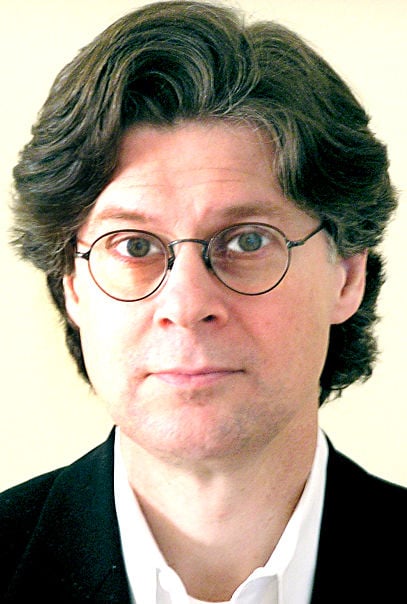 There have so far been two hearings in the House Democrats’ effort to impeach President Donald Trump over the Ukraine matter. Both have been held in secret. One was last Thursday, the other Friday, and the public does not know what was said in either. Two more were scheduled for this week, and they were to be held behind closed doors, too.

Last week’s sessions weren’t just secret. They were super-secret. The first hearing, in which the witness was former Ukraine special envoy Kurt Volker, was held in what is known as a SCIF, which stands for sensitive compartmented information facility. It is a room in the Capitol, built to be impervious to electronic surveillance so that lawmakers can discuss the nation’s most important secrets without fear of discovery.

The second hearing, in which intelligence community inspector general Michael Atkinson testified, was also held in the SCIF.

Were highly classified matters discussed at the Volker and Atkinson hearings? Apparently not. Neither interview was classified. And even if some classified information were involved, it would be astonishing for Democrats to believe they could attempt to remove the president on the basis of information that is not available to the public.

The secrecy, decreed by House Intelligence Committee Chairman Adam Schiff, has taken Republicans by surprise. Some are now speaking out about it.

“Adam Schiff is running an impeachment inquiry secretly, behind closed doors, and he’s making up the rules as he goes along,” Republican Rep. John Ratcliffe said.

“These proceedings should be public,” Republican Rep. Jim Jordan added. “Democrats are trying to remove the president 13 months before an election based on an anonymous whistleblower ... and they’re doing it all in a closed-door process.”

“This is nothing more or less than a show trial for the media,” said Rep. Devin Nunes, the ranking Republican on the Intelligence Committee, noting that with secrecy rules in place, the public knows only what is leaked to the press. “The Democrats leak what they want to leak to build narratives.”

Of course, that is not how Democrats would describe it. For his part, Schiff has said that secrecy is needed to protect the identity of the CIA whistleblower who started the entire process. “The whistleblower has the right in the statute to remain anonymous,” Schiff said recently, referring to the Intelligence Community Whistleblower Protection Act, which lays out the process through which intelligence community whistleblowers can file complaints.

First, the inspector general is the only official specifically prohibited from disclosing the identity. And second, even if the statute’s use of “investigation” refers to the inspector general’s probe, the fact is, the whistleblower is now part of an impeachment proceeding. Disclosure is, in fact, unavoidable; Democrats cannot keep entire hearings secret, keep vital information away from the American people, in the name of preserving the anonymity of a whistleblower.

Yet that appears to be what Schiff and his Democratic colleagues are doing. This week the U.S. ambassador to the European Union, Gordon Sondland, was scheduled to be interviewed, but the State Department nixed his appearance at the last minute. That session was set to be held behind closed doors. Also this week, lawmakers will interview former U.S. ambassador to Ukraine Marie Yovanovich — behind closed doors. Republicans can complain, but Democrats, in firm control of the House, can do as they like. (An inquiry to Schiff’s office went unanswered.)

The Democratic drive to impeach President Trump over Ukraine is the first impeachment proceeding solely about foreign policy. The exercise of foreign policy sometimes involves secrecy. The imposition of secrecy was an enormous problem in public understanding of the Trump-Russia affair, which ended with the special counsel unable to establish that there had been any conspiracy or coordination involving Russia and the Trump 2016 campaign. In that investigation, the public would have been better served by more disclosure, more quickly.

The impeachment proceedings should be opened up — now.

Byron York is chief political correspondent for The Washington Examiner.