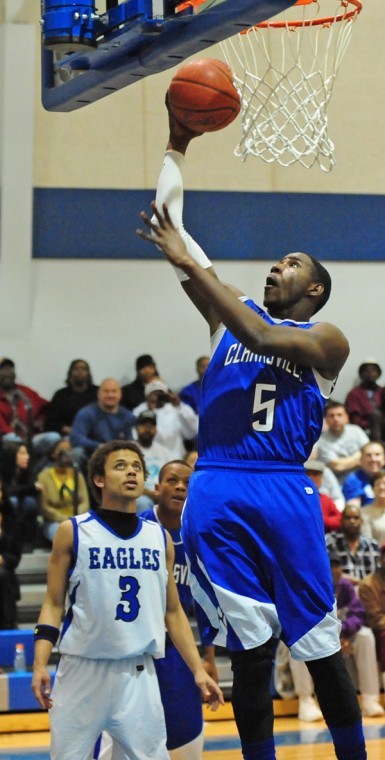 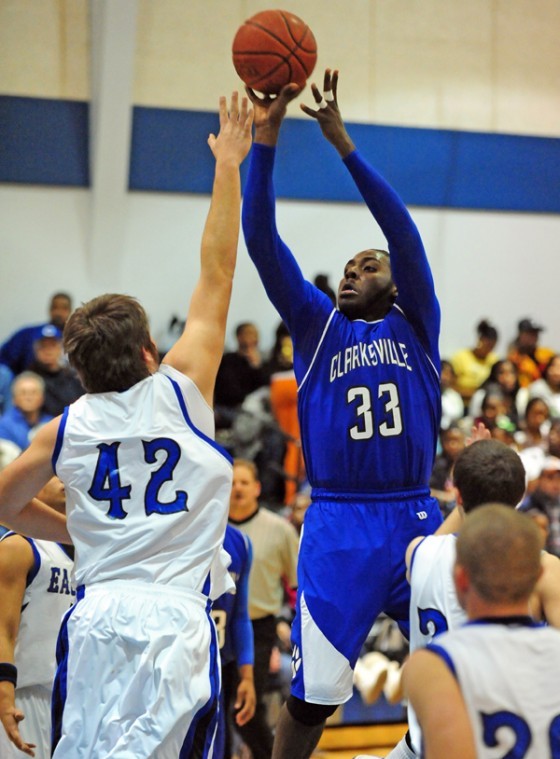 DETROIT — The victory was already in the bag for the Clarksville Tigers on Tuesday night, but several players cheered from the bench as they had a chance to eclipse the century mark for the second consecutive contest.

Clarksville's Chris Mitchell put up a pair of free throws and swished the second one, which would have allowed the Tigers to reach their magical mark. The only problem is that it was waved off by the officials because of a lane violation.

Regardless of the measly point, the Class A, Division I second-ranked Tigers came away with a 99-48 triumph over the Detroit Eagles in a District 17-A, Division I clash.

"A win is a win," Clarksville junior post Jarrian Roberts said with a grin. "All we have to do is score one more bucket than them."

That was no problem for the Tigers, who dominated from the opening tip.

They opened the game with 10 unanswered points and never looked back en route to the blow-out win.

Sophomore Gary Moore poured in eight of those points on the game-opening run and finished with a game-high 30 points. He showed his versatility after producing points by way of layups, putbacks, dunks and 3-pointers.

Junior guards H.B. Rosser and Radonte Edwards also got in on the scoring frenzy, as they finished with 15 points apiece.

The Tigers raced to a 24-11 lead after the first quarter and continued their onslaught through the remainder of the first half, as they took a 55-21 advantage to the halftime break.

Comfortable margins have become routine for Clarksville (16-5, 5-0) through the first half of district play. Those wide leads have allowed the Tigers' reserves to see plenty of minutes in the contests.

Jordan Alexander and freshman Tyus Savage cashed in on their opportunities Tuesday night, as they contributed with eight points and seven points, respectively.

The wide margins are both a blessing and a curse for Clarksville head coach Joe Sigler, who doesn't fancy running the score up on an opponent. But at the same time, he has to prepare his team for games later in the regular season and postseason.

"I think that when you have a score like this, sometimes it may appear that we are, I'm going to say, running up the score or something like that," Sigler said. "That's not the case. We might be trying to work on some type of zone that we may not get a chance to work on.

"Sometimes we get tired of practicing against ourselves. When we have a chance to get out here and do some things, we're going to do it."

Detroit (7-17, 1-4) displayed a never-say-die attitude throughout the contest and enjoyed the bulk of its success in a 16-point fourth quarter.

Clarksville is scheduled to host Avery on Friday, while Detroit travels for a showdown against McLeod.