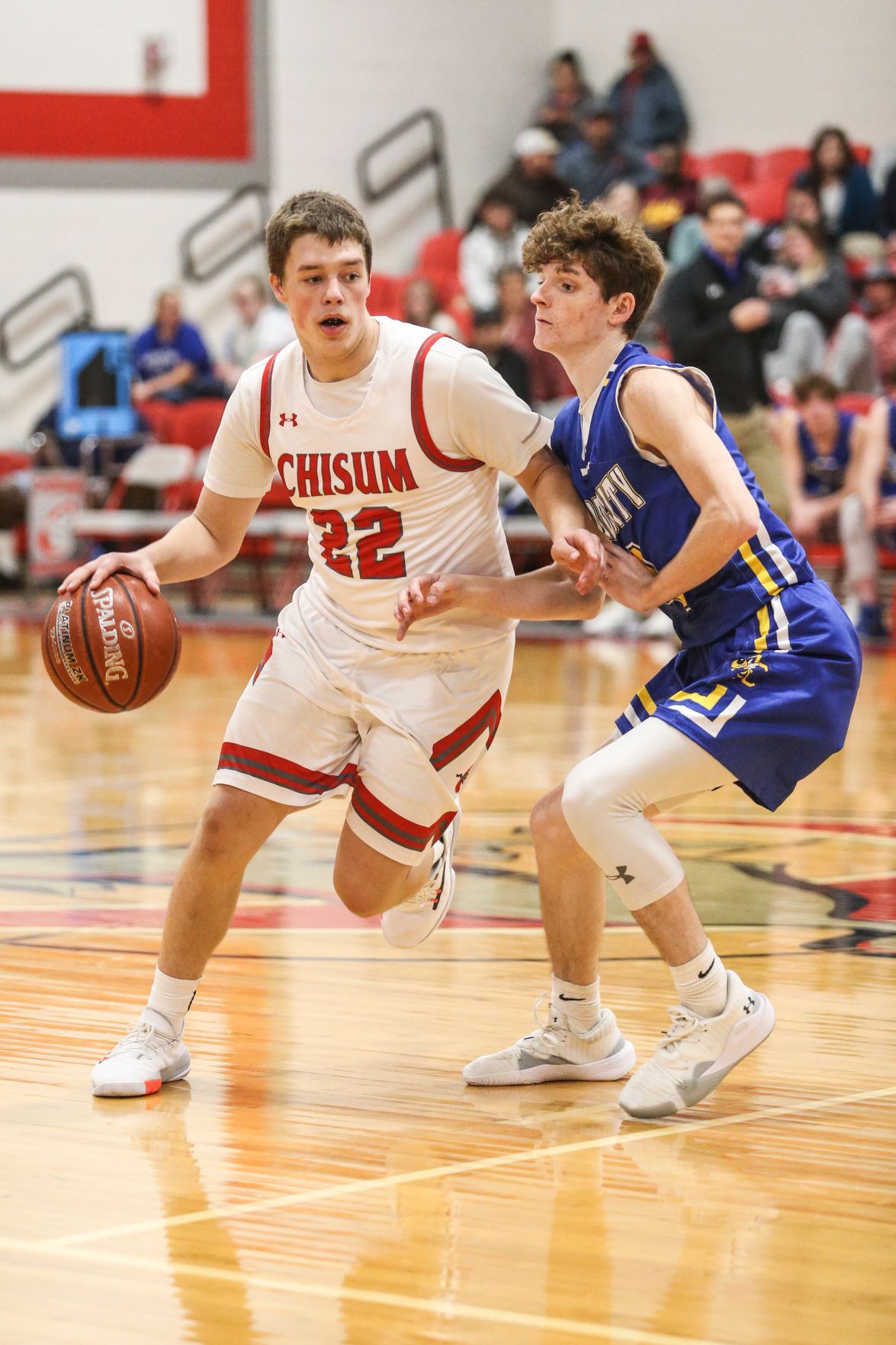 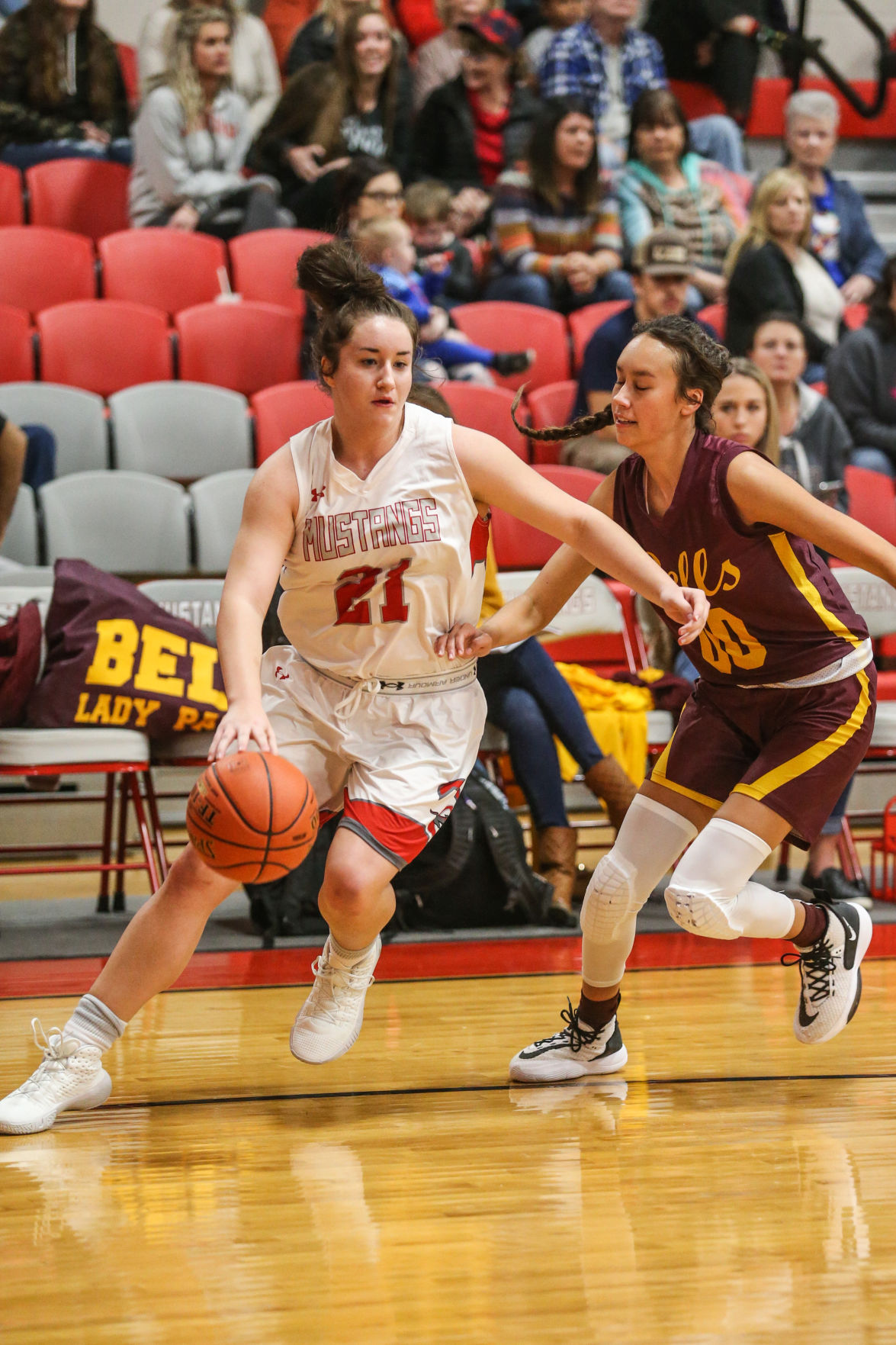 It came down to the wire, but the Chisum Mustangs basketball team earned its second win of the season. This time, the Mustangs held on for a 43-40 over Dodd City in Chisum’s home opener.

The Mustangs held a 36-28 lead after senior guard Hunter Carter swished a 3-pointer in the corner with 5:59 left in the fourth quarter. After that, junior post Trenton Tyler drew a big charge with 4:38 left to give the home team even more momentum. However, the visiting Hornets did not go quietly.

Dodd City used a 10-0 run, capped off by a short jumper with 2:06 left to take a 38-36 lead, but the slim margin was short-lived as Tyler hit a layup with 1:45 remaining to tie the game at 38-all. The Mustang defense stood tall and got the stop it needed, then sophomore guard Evan Wood was fouled shooting a 3-pointer with 49.2 seconds left. The sophomore calmly drained all three free throws to put Chisum ahead 41-38.

“I just have to have the confidence to knock them down,” Chisum sophomore guard Evan Wood said. “I shoot free throws every day at practice, I shoot them six days a week and I know I can make them. I just had to remind myself I could do it.”

Again, the Mustang defense recorded another stop, stealing the ball at the high post and Carter drew a foul, but missed the front end of the one-and-one, and Dodd City scored inside with 4.6 seconds to go. Wood drew a foul on the ensuing inbounds play and went back to the line with 2.9 seconds remaining. Once again, the second-year varsity player swished both free throws to extend the lead to 43-40. Dodd City could not get a shot attempt off to try to tie the game due to great full-court defense from Chisum.

“I think everything started with us defensively tonight,” Mustangs head basketball coach Brian Temple said. “We played outstanding team defense, and if we can play defense like that, we believe we can win a lot of games.”

Neither team led by more than eight points at anytime in the contest, but Chisum got the offensive spurts it needed to mostly stay in control of the second half.

“This is just the third game of the season, but the offense will pick up,” Carter said. “We had a couple plays, but what really helped our offense was our defense. Good defense leads to good offense.”

Carter led Chisum with 14 points, while Tyler added 9 points. Wood dropped 7 points, and senior Hayden Todd had 4. Levi Weems contributed with 3 points, with all 3 coming from behind the arc with 2 seconds left in the third quarter to give Chisum a 28-26 lead.

Moving forward, Temple wants to see his offense continue to improve and compliment the defense.

“We need to get more consistent on offense,” Temple said. “Defensively, I’m not worried about us, or our effort there, but we need to execute offensively at a higher rate.”

The Mustangs will resume regular season play in the upcoming Prairiland Tournament from Thursday through Saturday with details to be announced.

The Bells Lady Panthers jumped out to a big lead early over Chisum and never looked back en route to a 58-25 victory.

Bells (8-2) used its physical brand of play and suffocating defense to build an early 11-2 lead, which forced Chisum to call a timeout with 3:04 left in the first quarter. A driving layup from sophomore guard Landrey Howard cut Chisum’s deficit to 15-6 with 1:56 left in the opening quarter, but nine points was the closest the Lady Mustangs got the entire contest.

“Historically, Bells has always been a good girls basketball school, and we scheduled them to get ready for our district,” Lady Mustangs head basketball coach Will Smith said. “They were physical on offense and defense, and we weren’t able to match that. We are planning on fixing it starting with our next practice.”

“Last year, we were the most physical team when we stepped on the court,” Smith said. “That’s something we’re going to have to get back to.”

The Lady Mustangs will resume regular season play in the upcoming Prairiland Tournament from Thursday through Saturday with details to be announced.