You are the owner of this article.
Edit Article Add New Article
You have permission to edit this article.
Edit
Home
News
Opinion
Be Heard
Sports
Classifieds
Obituaries
Customer Service
e-Edition
Paris Life
Reader's Choice
1 of 2 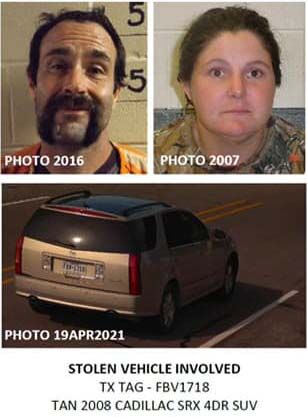 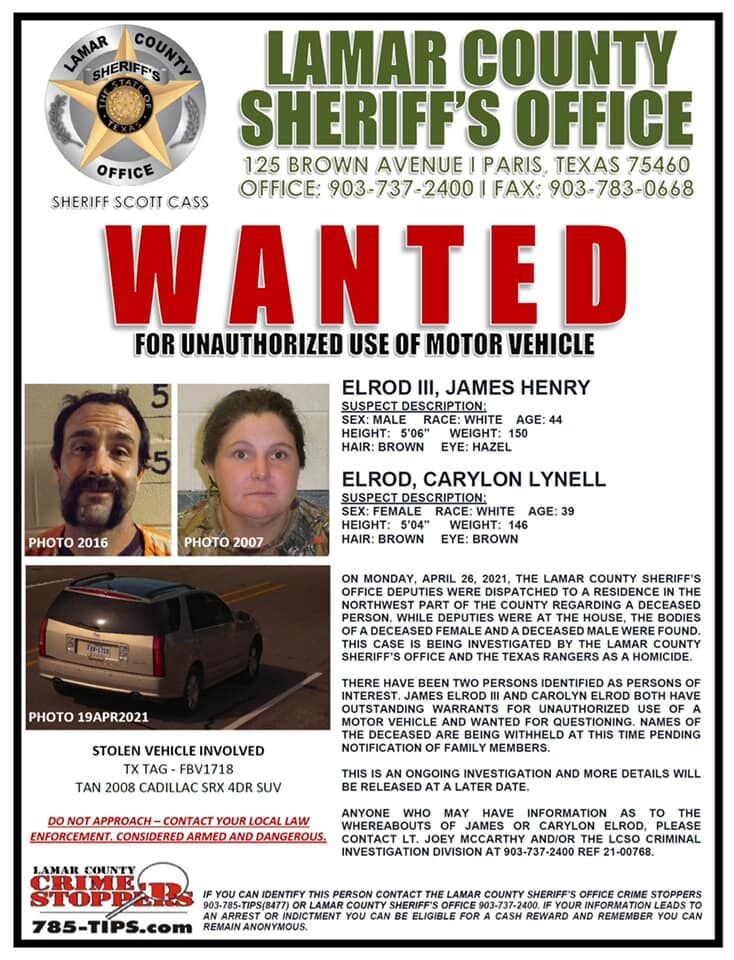 A man and a woman are dead, and Lamar County Sheriff’s Office deputies and Texas Rangers are looking for two persons of interest as part of a homicide investigation opened Monday.

James Elrod III and Carolyn Elrod are named as the persons of interest. Both have outstanding warrants for unauthorized use of a motor vehicle and are wanted for questioning in the homicide case, Sheriff Scott Cass said in a news release.

The investigation started with a report of a deceased person in the northwest part of Lamar County, Cass said. While deputies were at the residence, they found the bodies of a woman and man. Their identities are being withheld pending notification of family members, Cass said.

Anyone with information as to the Elrods’ whereabouts are encouraged to call Lt. Joey McCarthy or the Lamar County Sheriff’s Office Criminal Investigation Division at 903-737-2400. Reference case number 21-00768.

“This is an ongoing investigation and more details will be released at a later date,” Cass said.

Elrods wanted for questioning are captured

The Lamar County Sheriff’s Office on Thursday announced that James Elrod III and Carolyn Elrod had been captured. Details of the arrest have not been released.

What would you grade this year’s legislative session?

The Texas Legislature wrapped up this year’s lawmaking session on Sunday. Although members of the House and Senate touted wins for both Republicans and Democrats, tensions are rising between the legislative bodies amid criticism from Lt. Gov. Dan Patrick. What would you grade this year’s legislative session?