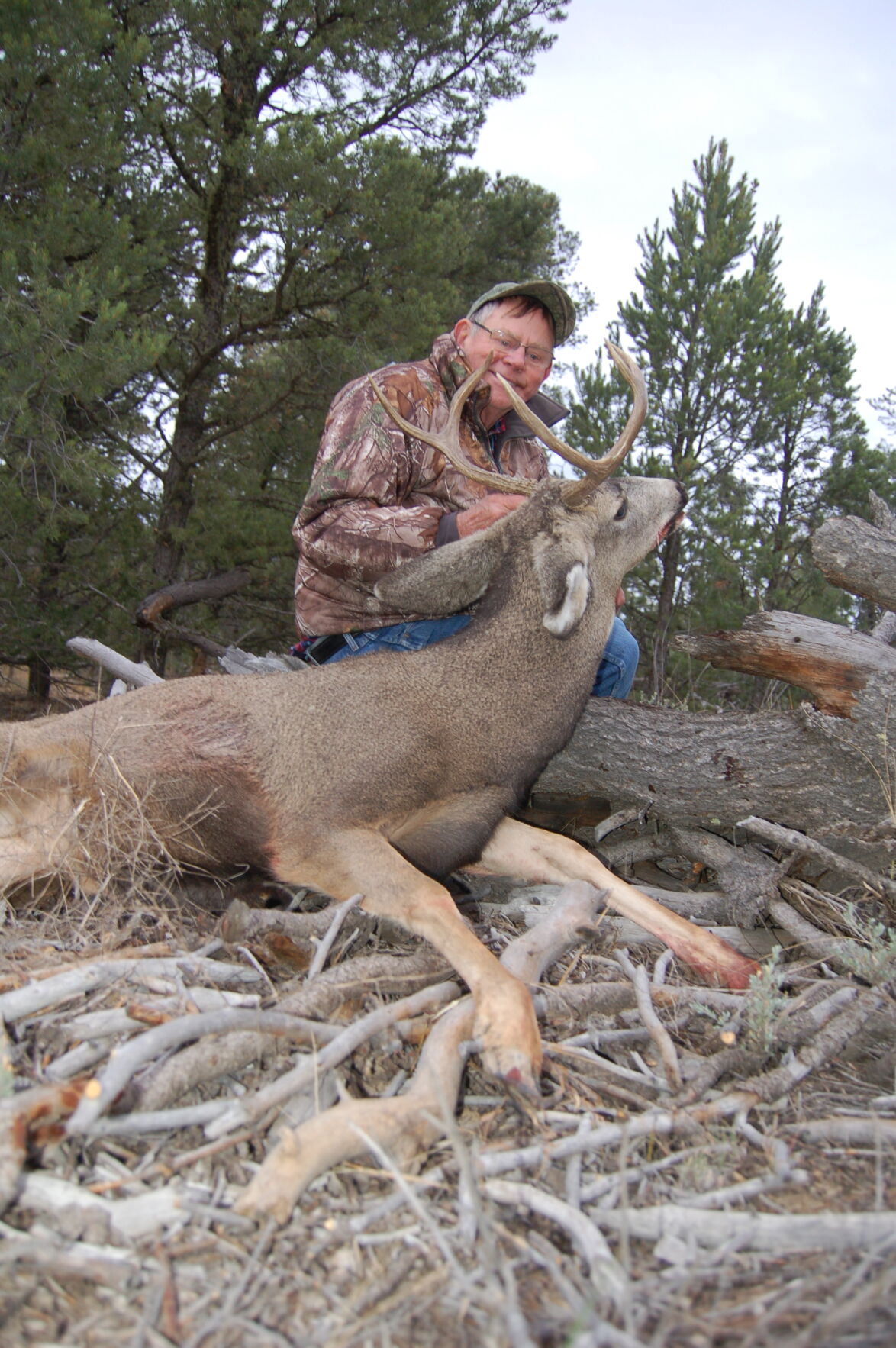 Although only a 6-point, Luke Clayton was very happy to harvest this mature mule deer buck a couple years ago. It supplied some meat, had reached its full potential in antler development and will forever be remembered as the highlight of a great hunt in beautiful mountain country.

After almost 60 years of taking to the whitetail woods, I think I’m qualified to at least take a stab at answering the question: What is a trophy buck? This question might sound simple, especially to those of you that have just begun your whitetail hunting career, but take it from me, it’s a question that has kept deer hunters awake at night.

To possibly help answer this complex question, I will give an account of my deer hunting career, which has gone full circle through the years.

I began hunting deer at the age of 11 in the northern part of Red River county, where I was raised. That was back well before the deer boon years, in the early 1960s and ’70s. Back then, for most deer hunters of the region, any legal buck was considered a trophy. That is way before the punchline of age, genetics and diet became the mantra of deer hunters from Canada to south Texas. These are the three musts used to described what it takes for a male whitetail deer to attain trophy status.

I can remember back in those days, points were used to describe a trophy buck, i.e., an 8-pointer was bigger and better than a 6-pointer, disregarding factors such as mass, antler bean length or tine length. If you killed a 10-pointer back in those days, you had taken a mighty big buck, even if its Boone and Crockett score might have added up to a whopping 100 inches. In those days, only a handful of book whitetails scoring 172 BC points were taken in Texas each year, and most of those from sprawling south Texas ranches where native vegetation supplied the minerals necessary for producing heavy antlers and genetics were the best in the state.

I went through a period when I was caught up in numbers. If I had a 140 BC buck mounted, I wanted a 150 and I devoted the time to try to harvest him. In the early ’80s, high-fenced ranches became common and heavy antlered bucks became the norm. No longer did a 150 BC buck create the excitement of a decade or so before. Through genetics, high-protein feed and allowing deer to achieve their potential, high-scoring whitetails became more common. Nowadays on managed whitetail property, a 130-inch buck is often considered a management deer. Many 1.5-year-old bucks today on managed ranches have racks of this size and bigger. When I first began hunting, I would venture to guess in Red River County and across much of the state, only a very few such animals were taken each season.

It’s important to keep in mind that even today, where 150-inch bucks are widely available on ranches all across the state, not all deer hunters have the same goal when releasing an arrow or squeezing the trigger, nor do they have the same opportunities, depending upon where they hunt. A hunt on a big, low-fenced ranch a few years ago is a good case in point. I was guiding a veteran hunter who was vice president of a large gun manufacturing company. Several writers were present as well as one of the top wildlife biologists in the country. My newfound friend and I were told of an area of the ranch that a pretty 10-point buck was frequenting. He had been seen by a young man who was also serving as a guide and who was making comments such as “He needs another year to grow” around camp. I spoke with the ranch owner and even consulted my biologist buddy about possibly hunting that area with my new friend and hopefully trying to harvest the buck. With the go ahead from the owner, we spent a couple days in pursuit of this buck and on the last day of the hunt, my client made a good shot and took the buck. He was heavy of antler, and scored in the mid 130s. My friend from back east was thrilled with his buck, the largest he had taken in his lengthy career. He had hunted the world for all sorts of big game but did most of his whitetail hunting around him home on the East Coast.

At camp, the young guide made the mistake of, in front of the entire camp, saying something like, “Yeah, we passed that young buck up several times, he is probably only 3.5 years old, needed a couple more years.” He later received a good education on guide etiquette and manners. My point is, this buck was most definitely a trophy for my client and I’m sure the mount still is a highlight to his den wall. When it comes to hunting bucks, it’s all about personal choice.

These days, I am often invited to hunt well-managed ranches where the opportunity of taking a buck of a lifetime exists. Before the hunt, I tell the owner/manager that if I had my choice, I would shoot an 8-year-old fork horn buck with 24-inch main means, on his way down. A mature old buck such as this will suffice for the article I will write and I will consider it a trophy, especially when taken with one of my big bore air rifles or bow. Sometimes, I am instructed to shoot the biggest buck that comes by, and I will gladly do so but it doesn’t take a high-scoring buck any longer to fill the bill for me.

If you are a veteran deer hunter, you already know what constitutes a trophy in your eyes. But if you are just getting started, don’t get caught up in the numbers game. Learning to enjoy your time around camp with the hopes of filling your buck tag is what deer hunting is all about. It takes some of us longer than others to figure this out.

OUTDOORS COMMENTARY: Making plans for getting into the outdoors

This coming summer, I’m planning to fish up in northwestern Saskatchewan for giant northern pike and lake trout, assuming the border reopens.