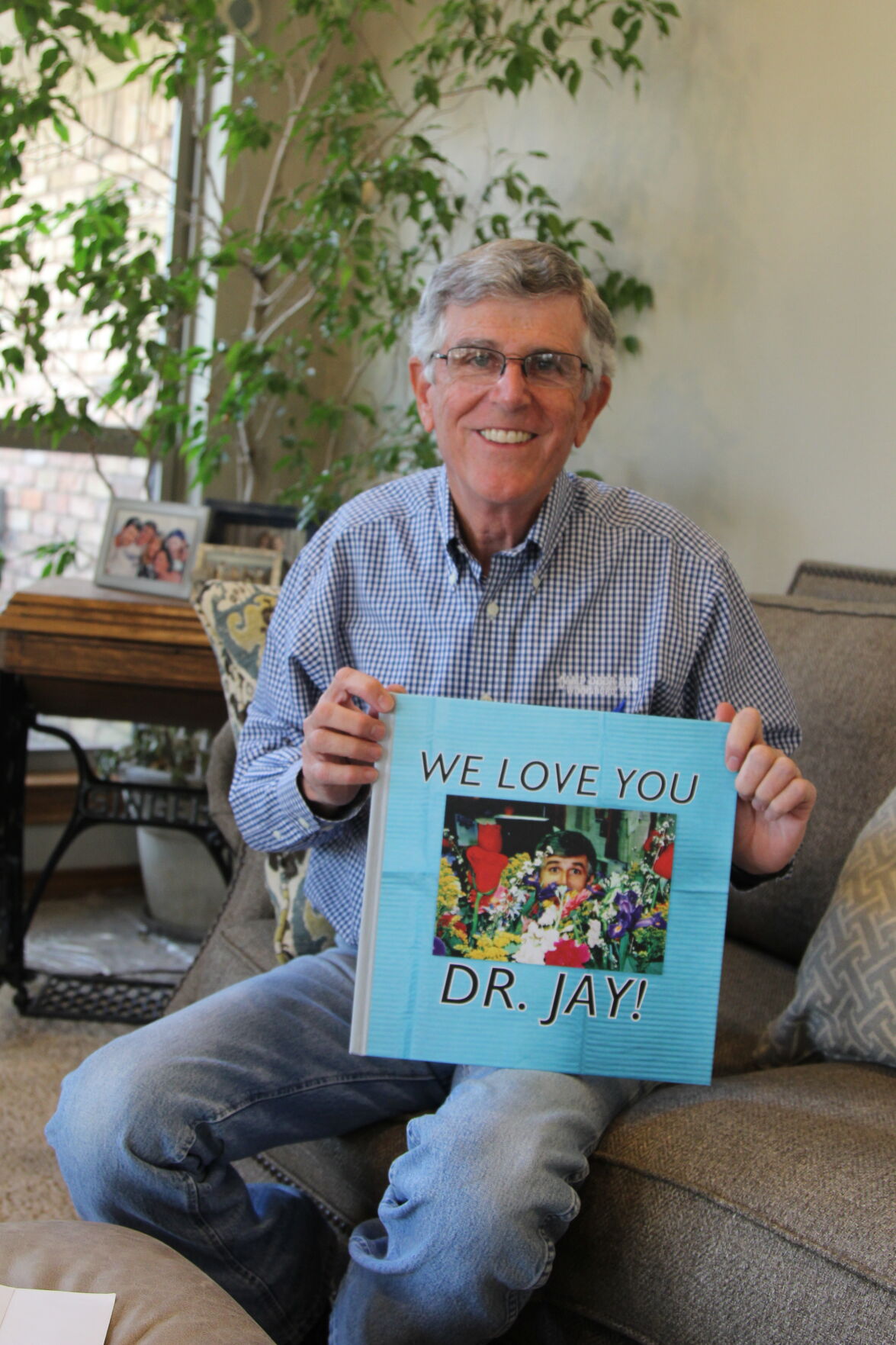 Dr. Jay Spencer holds up the book organized by his daughter-in-law featuring articles from the past, letters from co-workers and employees and other memorabilia from his 43-year- career. 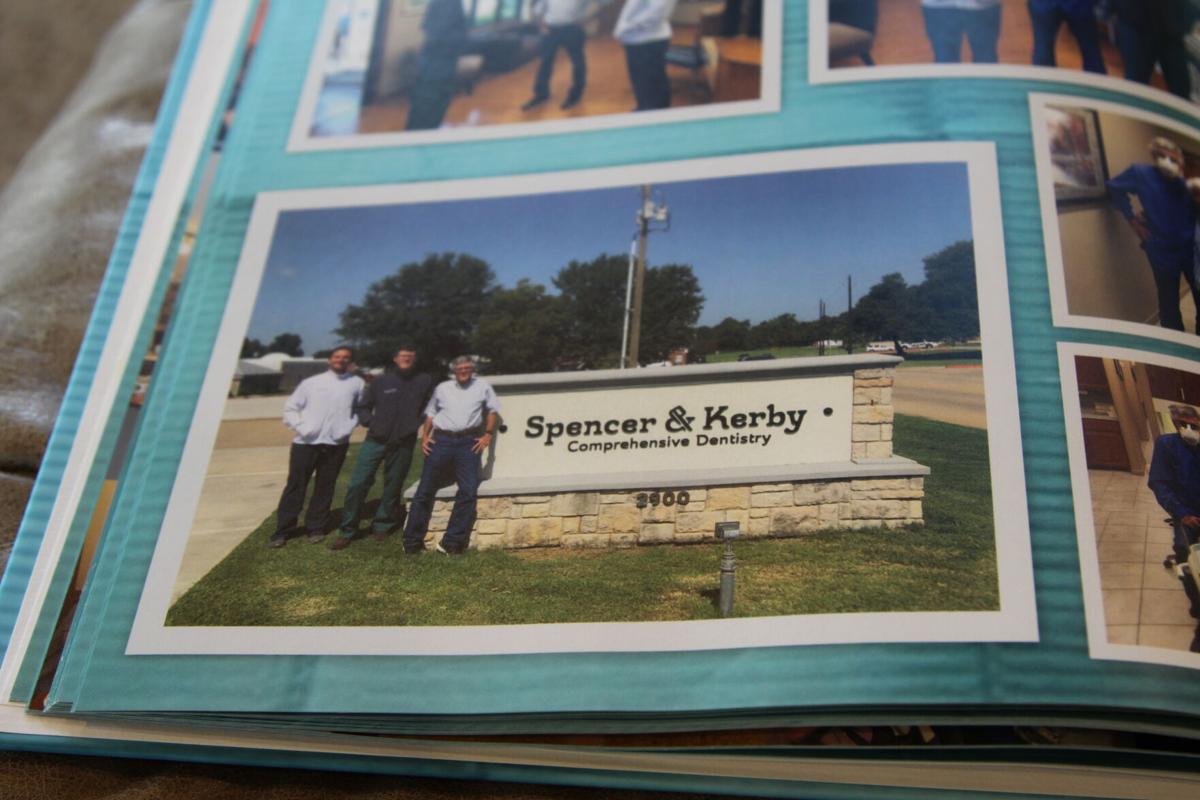 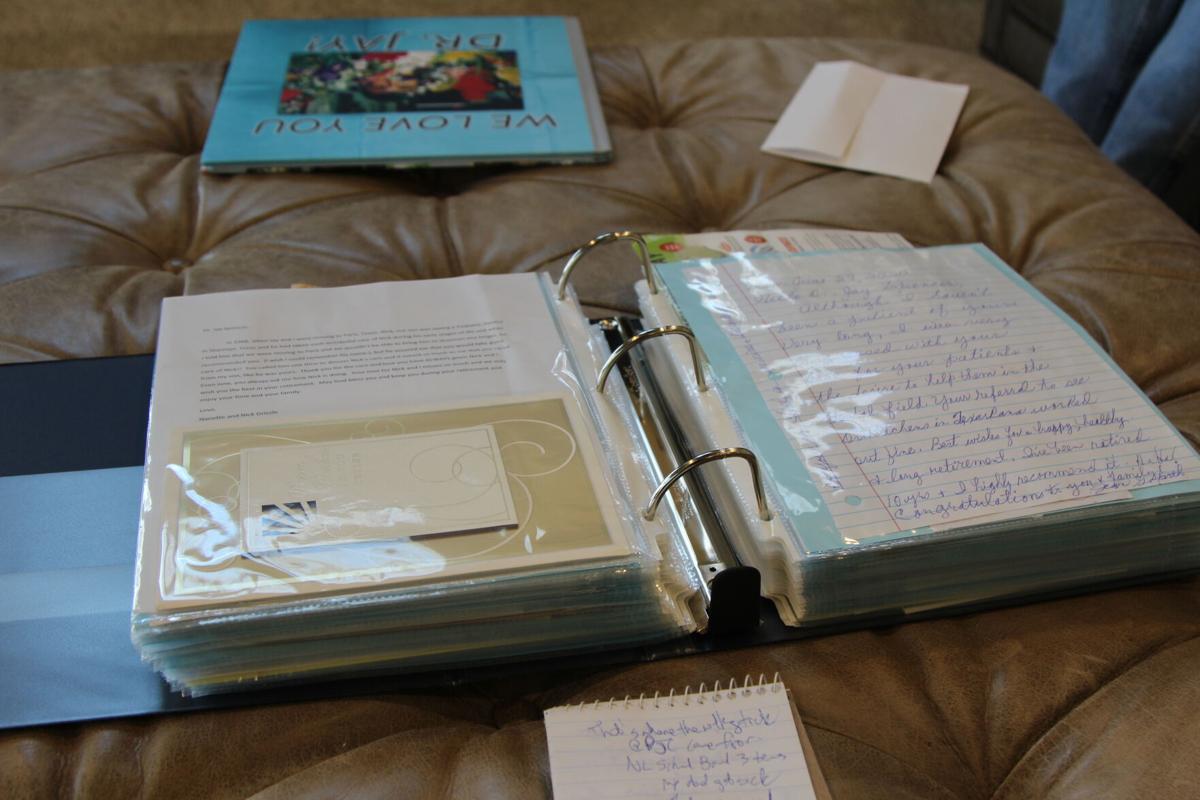 Dr. Jay Spencer holds up the book organized by his daughter-in-law featuring articles from the past, letters from co-workers and employees and other memorabilia from his 43-year- career.

It all comes down to family.

Family brought him to Paris, and though now retired, Dr. Jay Spencer’s family continues in Paris, both the family that continues his dental practice — his son, Clint, is a dentist and his other son, Clay, became an orthodontist — and the family of patients and co-workers who came to the practice and stayed with them through Spencer’s 43-year career.

“I know one family I was treating through the fourth generation,” he said. “People were not just patients, they were friends.”

In fact, through the organization of his daughter-in-law, Rachel, Spencer received a book featuring photos and letters from family and former co-workers. Separately, they also compiled letters in a 4-inch binder from patients congratulating Spencer on his retirement and re-living memories shared.

“Well, back in 1982, God blessed me with the best job and boss I could have asked for,” Denise Felty wrote. Felty retired when the dental practice closed for the pandemic and decided to not come back, Spencer said. “Hygienists are lucky to have one good boss in their career, but to have one for 37 years is extraordinary. Thank you for all you have done for me through these years and not only for being my boss, but family and friend.”

In 1977, immediately after he received his dentistry degree from Baylor School of Dentistry, Spencer moved with his wife, Gay, to her hometown of Paris and joined Dr. W. L. Kelly’s practice. Originally from Gilmer, a little over 80 miles from Paris, he said he knew he didn’t want to practice in his hometown, but while in college he visited Paris with Gay, who’s uncle had died.

“I brought her home, and Dr. Kelly came by the visitation,” Spencer said. “They said, ‘oh, Jay’s going to go to dental school. He kind of perked up. Then, when I was a freshman in dental school, he had open heart surgery in Baylor, one of the early ones (open heart surgeries) that they were doing and the dental school and hospital were in the same building. I stopped by to see him every day, and after that, I planned on coming back.”

Kelly had even graduated from the same dental school, he said.

He practiced 10 years after Spencer joined the practice. They went to church together, and Spencer said Kelly was like another parent to him and was his peer.

Spencer doesn’t know who was his longest patient.

“I couldn’t say who the one is, but I know my first crown was on Gay’s cousin, Sue Denton,” Spencer said. “I know if I named someone, somebody else would challenge it. And that was a big part of it. If you see someone for 40 years, you see someone when they’re 20 years old, and then they get married and have kids and their kids grew up and their kids bring their kids back to you. There’s kids that went off to college and all of a sudden they’d show back up with their kids here and say, ‘I’m coming back here because I never was scared and I never knew I got a shot.’”

And that was part of the magic of Spencer’s practice.

“I never did think about it like it was a job you have to do on somebody or for the money,” Spencer said. “People came in, and you took care of what they needed.”

Patients were family, and children never knew they got a shot, they got a “bubble.” In some of the letters, past patients shared memories of getting a “bubble.”

“It’s a trust factor. … They wrote letters in there about, ‘I didn’t mind bringing my kids.’ One of them said something like ‘they told their friend they had been to the dentist and said, ‘my dentist doesn’t give shots.’ That parent called the other parent and said, ‘Who’s your dentist?’

“I told them I was giving them a bubble and for them to tell me when they feel it.”

Spencer said he did a lot of things that they advise against in dental school. He let parents come back into the dental office with their children, which actually allowed for a better understanding between patient, parent and their doctor, and he let his wife work in the practice with him.

“Gay was good … they told you that your wife was too interested in your affairs and would run off the staff and be rude to your patients,” Spencer said. “The difference in Gay is they all want her to come work in the office because she’d probably let them get by with a lot more than I would. She was good to them, and she’d let us do the dental stuff.”

Most doctors have “two or three tries” to figure out how a practice works, but that was never an issue for Spencer, he said.

“We had very little turnover,” he said. The last assistant he hired was 12 years ago.

The profession even passed on to his children. Two of his three children, Clint and Clay, the oldest and middle child also went into dentistry, with Clint joining his father’s practice and Clay specializing in orthodontics. The youngest, his daughter Jayme, is rancher’s wife in Montana.

“It’s really neat to have your kids come back and do what you do and get to work with them,” Spencer said.

Cliff Kirby, the son of Wayne and Becky Kirby, also joined the practice. Wayne is one of Spencer’s best friends, and Becky worked at Spencer’s practice for 37 years. Kirby, originally in business school, said he wanted to go to dental school but didn’t want to come back to Paris to compete against Spencer.

Spencer told Kirby that by the time he was done with school, they would probably be looking to add another doctor.

“So, he went back and took some prerequisites and then went to school,” Spencer said.

He said he was pondering retirement when both of his sons announced they wanted to go to dental school as well.

In a letter to his father from 1994, featured in the book, Clint Spencer said he has always wanted to be like his dad.

“To me no one can pay me a higher compliment when they say I’m just like him,” Clint Spencer wrote. “I like that. I think we all like it when someone says we’re like our hero.”

Spencer plans to spend his time fishing, hunting and playing with his 11 grandchildren.

Paris ISD FFA instructors Steve Tucker, Jacy Hayes and Sydney Hines answered questions from The Paris News about how their students have been faring during the ongoing Covid-19 pandemic