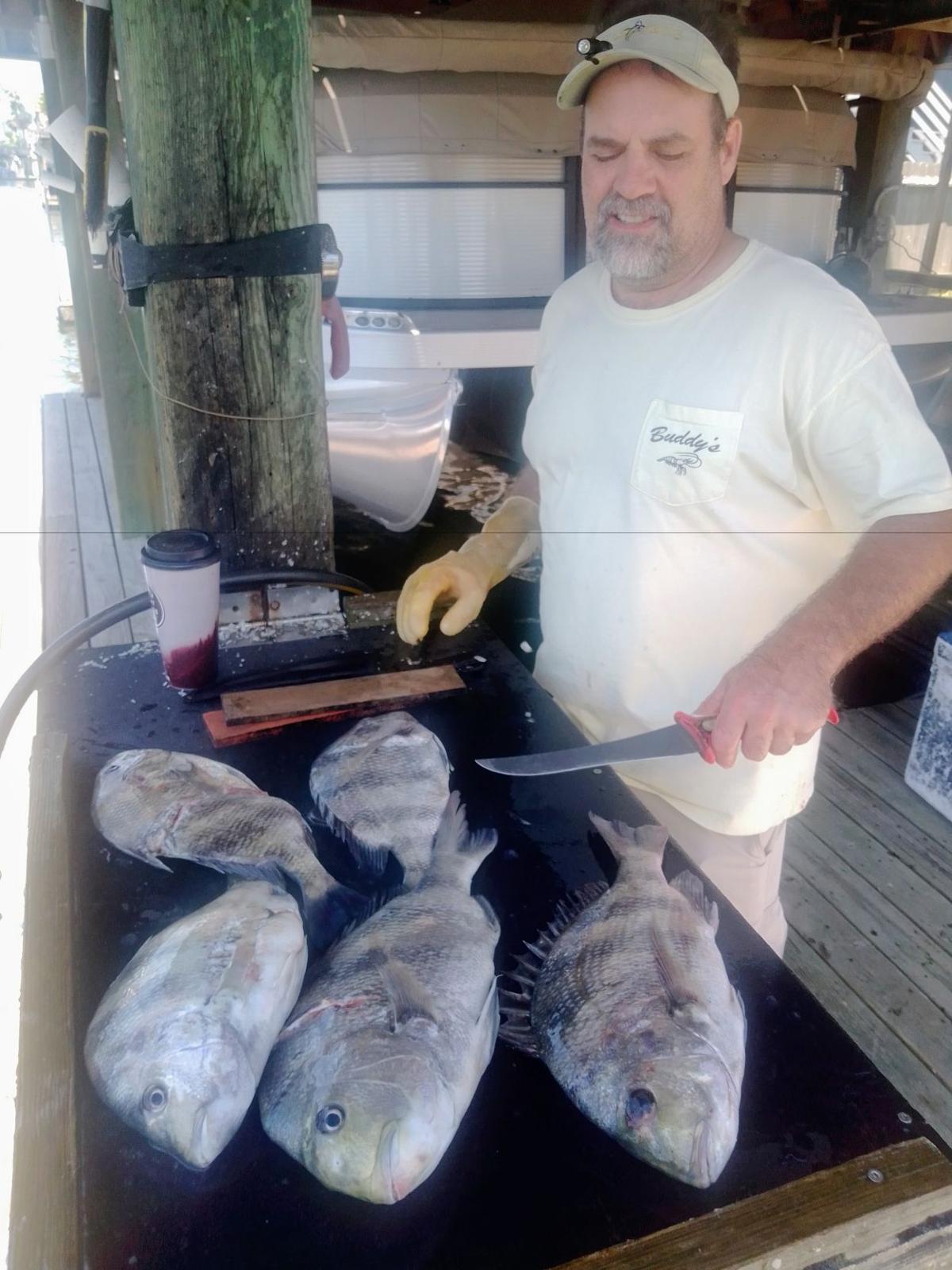 During the past several years, I’ve had the opportunity to fish with my friend, Trey Schmidt, many times. Trey has a coveted fin fish license on the Texas coast. He spends three nights each week gigging for flounder, the majority he sells to Nate’s West End Bar and Grill, a popular off-the-beaten path restaurant just west of Jamaica Beach on the road heading from Galveston to Freeport. Trey can also harvest sheepshead (a great eating but often overlooked saltwater fish) stingray, crabs and a few other species.

Trey’s day job is the funeral business. His family has been in the funeral business in Katy for over 70 years. My friend takes great pride in his work, regardless if that is comforting a grieving family or gigging his daily limit of flounder. As Trey puts it, “these three nights each week out on the bay gigging helps me do my primary job better. I’m out in the great outdoors getting lots of exercise and getting paid for what I would gladly do for free.”

The daily limit of flounder with a commercial license is 30 fish, and Trey seldom comes back to dock with fewer fish. Last week, I met him at his family get away home on the water in the early evening, just before dark.

“Luke, the tide has been low and the past couple nights, gigging has been exceptional. I expect we won’t have any problem getting on the fish,” he said as we boarded his 24-foot Long Beach boat rig and got ready for a night of gigging. A flounder boat has to be shallow draft because the water is often only a foot or 18 inches deep in the bays. The craft has a powerful outboard for getting from place to place, but also a 24 horsepower engine on the stern for turning the prop that propels the craft along the shallows. The bow is elevated with powerful lights mounted below, directed to the waters just ahead of the boat. Controls for the prop engine are in front of the elevated gigging scaffold in the front of the boat. There is a rudder to control the direction of the boat, but Trey makes minor adjustments to the course by using his gig/pole pushed down into the mud.

We eased out of the harbor just after the sun had set, just at twilight. Fishing boats and kayakers were returning to dock after an afternoon of fishing, and the lights on the many docks were coming on. Some of the residents of the homes were prepping their gear for a few hours of trout fishing under the lights. As we entered the bay, darkness had fallen and the lights along the coastline were twinkling from several miles away. There is something very tranquil about being out on the water at night, whether it’s running a trotline in an East Texas creek or heading out to gig for flounder on the coast. It’s very obvious why my buddy chose flounder gigging as a second career years ago.

Bait was so thick that the flounder lying flat on the bottom only had to flip up and grab their dinner. Like largemouth bass, flounder are ambush feeders. Bass rely on cover to conceal themselves and attack food that swims by. Flounder are perfectly camouflaged and when lying on bottom are very difficult to spot.

I’m not very good at spotting flounder that are lying motionless on the bottom, this takes practice. Most of the flounder I’ve gigged were pointed out to me.

Trey’s catch is sold to restaurants, whole. His goal is to spear the flounder in the head with one or two prongs of his gig. I did good to hit the flatfish somewhere with the gig. I’ve been with pros doing all sorts of specialized things in the outdoors but successfully gigging flounder ranks very high on the list.

Watching my friend poised with his gig in hand like a heron in pursuit of a baitfish, staring into the lights just ahead of the boat and then plunging the gig down into what appears to be only a sandy bottom. Ninety nine percent of the time, Trey hoisted a flounder or sometimes a sheepshead or blue crab into the awaiting buckets. Occasionally he would strike at what appeared to be a target and then jokingly comment that “You can’t strike gold every time!”

One thing I have learned about spending an evening gigging founder, a bit of sleep will be lost and an afternoon nap prior to fishing is highly advised. Make sure and plan to sleep in the next morning as well. Trey sometimes gets his limit by midnight or one but he is always prepared to go the distance until weather conditions cause for an early return to dock or, a limit is put on ice. It’s a rarity when he doesn’t gig his limit. After all, he has to keep his restaurant supplied with tasty flounder, those seafood hungry Galveston vacationers travel a long way to eat fresh flounder.