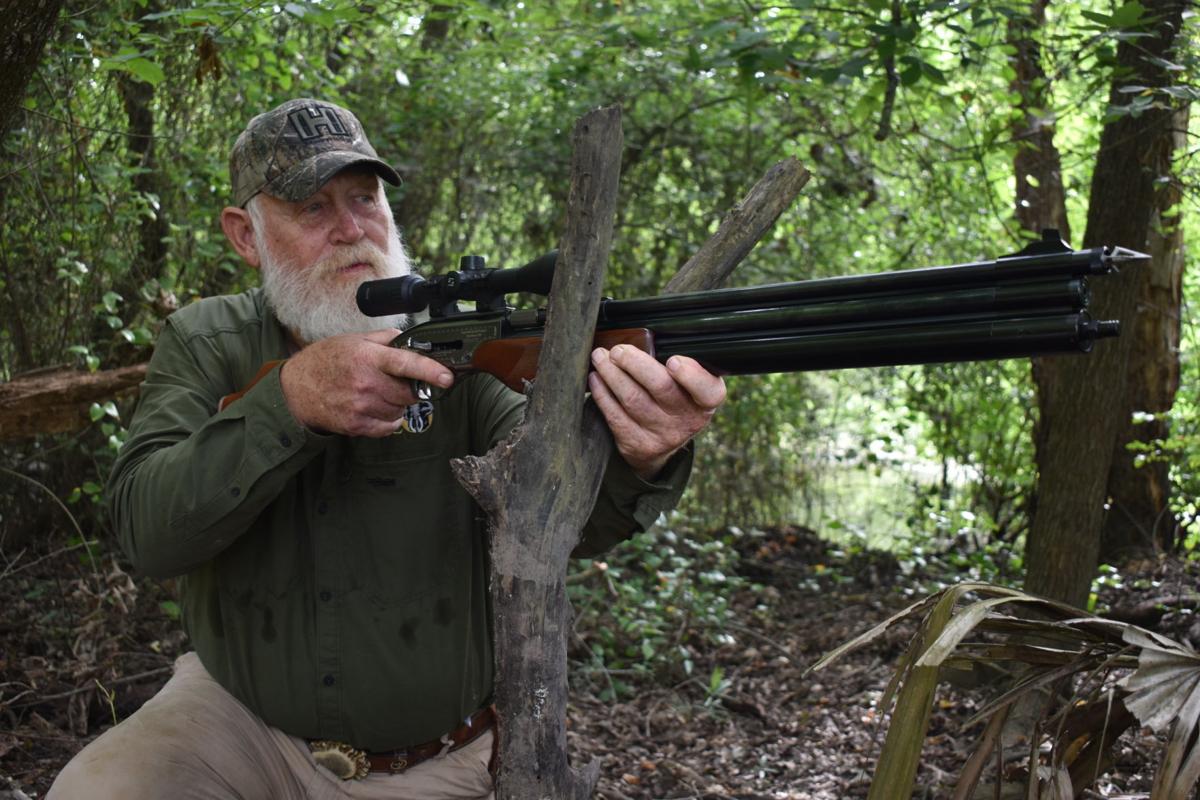 Larry Weishuhn on his first hunt with his new Dragon Claw big bore air rifle loaded with an arrow and broadhead.

Making the most of any outdoor outing equates to a positive attitude and the ability to remain flexible. After all, we don’t always catch a limit of fish or shoot a big whitetail buck, but if we take the time to truly relish our time spent in the outdoors, we benefit by returning home rejuvenated and refreshed.

A couple days spent last week with two great friends, Jeff Rice and Larry Weishuhn, a.k.a. “Mr. Whitetail,” is a good case in point. We arrived at Jeff’s Ranch near Lake Fork in the early afternoon, in time for Larry to get familiar with his new .50-caliber Dragon Claw air rifle. Larry is a very experienced hunter, but in his own words, “The last air rifle I shot was a Daisy BB gun.” He and I have hunted together in the past when I used my big bore air rifles to harvest hogs and exotics. I think when Larry saw the power of modern day PCP air rifles cleanly harvest game, his interest was sparked, and just like myself about nine years ago, he was anxious to learn about a completely new tool for harvesting game.

A few of adjustments on the scope and Larry’s new air rifle was shooting tight groups at 50 yards. Jeff had a couple of old archery targets set back-to-back and with the 3,000 psi charge, the Dragon Claw was pushing the arrow completely through both targets. Larry left his first shooting session full of confidence and ready for the afternoon hog hunt.

We settled into our blinds about 6 p.m. and need I explain how hot it can be in Texas in deep woods this time of year? Yes, it was sweltering, but I was hunting from an old Snap Lock hunting blind that I have used for about 10 years and expectations were high for the opportunity to take a good eater hog. Larry was hunting a ways down the creek with Jeff, who was packing his video camera, hoping to get some footage of Larry taking his first big game animal with the power of air.

My weapon of choice for this hunt was my trusty .45-caliber Texan air rifle by Airforce Airguns.

I met Larry and Jeff back at the camp house and, truth be known, I think maybe we were all a bit relieved that we didn’t have to butcher a hog. Rather, we relaxed under some very cold air conditioning, sipped cool drinks and I ‘layed out’ our dinner meal. I had used my Smokin Tex electric smoker to slow smoke a side of pork ribs and a whole chicken back at home the previous day. I cut the chicken and ribs up, placed them in an aluminum pan and covered them with Best of Texas BBQ sauce. Ten minutes in the oven and dinner was served. Potato salad and camp beans seasoned with fresh garlic, onion and homemade chipotle peppers topped the meal off.

We all came to the consensus that because of the heat and full moon, hogs would probably be feeding all night. I had packed another rifle topped with my Wraith day/night scope that I have used successfully on many night hunts, but we were having so much fun talking over old times and making plans for future hunts that we all decided to eat BBQ and stay cool. Thirty years ago, we would have all probably spent the entire night in the woods but being the seasoned hunters we are, the cool AC was feeling mighty good.

Before turning in, we made a plan not to get up an hour before daylight and sit in the blinds. Jeff had reconstructed a dock on his place that extends well out into the creek and set up a Sweeney Fish feeder I brought down a couple months ago. We felt confident that we could easily catch Larry a good mess of tasty catfish to take back home and enjoy that evening with his wife.

After breakfast, we made our way down to the dock. When the floating fish food hit the water’s surface, at least a dozen good eating size channel catfish appeared and began scooping up their breakfast. Number 4 treble hooks baited with Stick It bait placed about 4 foot below floaters was the ticket to catching a quick ‘mess’ of fish for Larry’s dinner. With the catfish filleted and iced, it was time to show Larry the ranch.

Jeff used his electric buggy to quietly traverse some of the lanes he had cut through the woods and we saw numerous deer, including one buck that was already sporting some headgear that showed much promise. The porkers were obviously lounging somewhere in the bottoms in the cool creek water, after an evening of cleaning up all the corn from every feeder.

Back at camp after our little photo shoot/scouting trip, we all packed up and vowed to return for round two with the hogs and catfish soon. Mr. Whitetail has now learned a new way of hunting with the power of air. He is already talking about joining me for a crack at a whitetail buck this fall with his Dragon Claw.

OUTDOORS COMMENTARY: Texoma striper fishing as good as it gets

Lake Texoma with its natural striper spawn is the mother of all striper lakes and we here in Texas and Oklahoma are fortunate indeed to have such a fishery closeby.