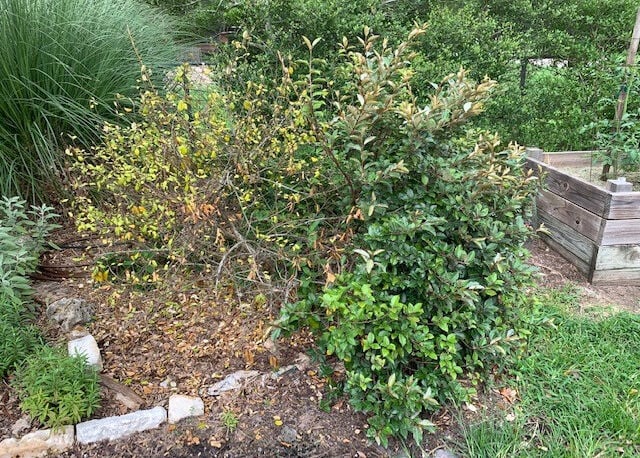 Elaeagnus, dying on one side, might not be salvagable 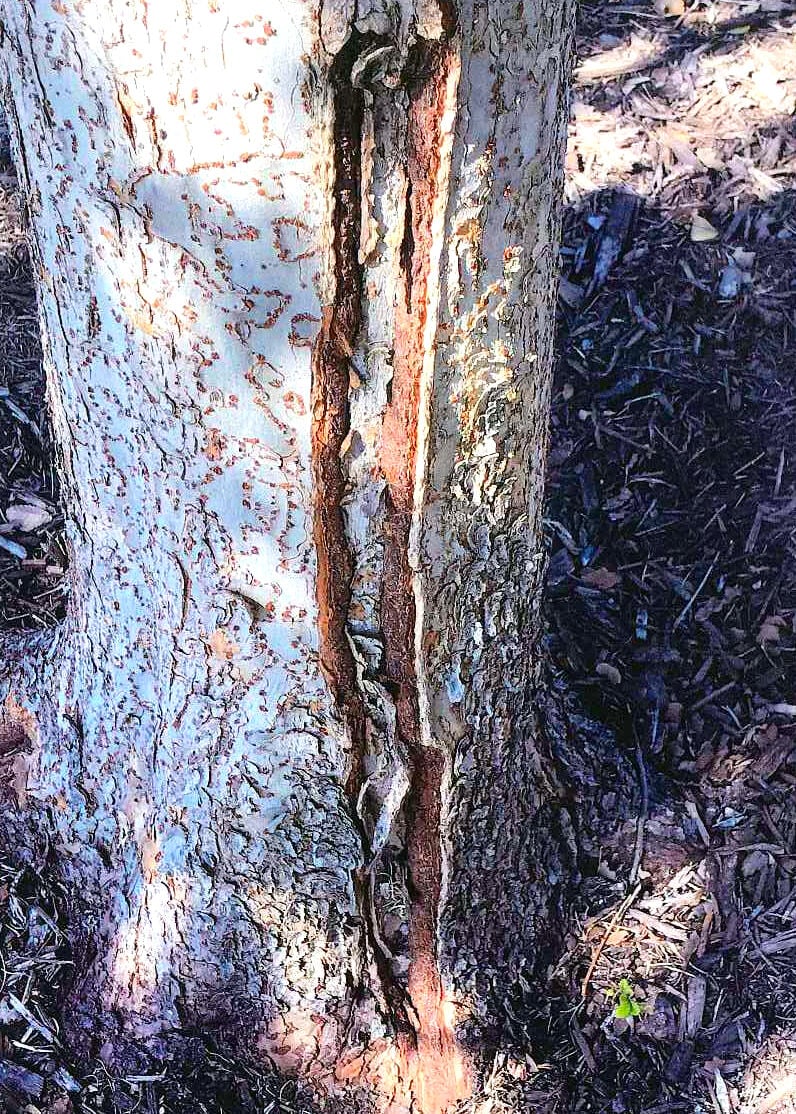 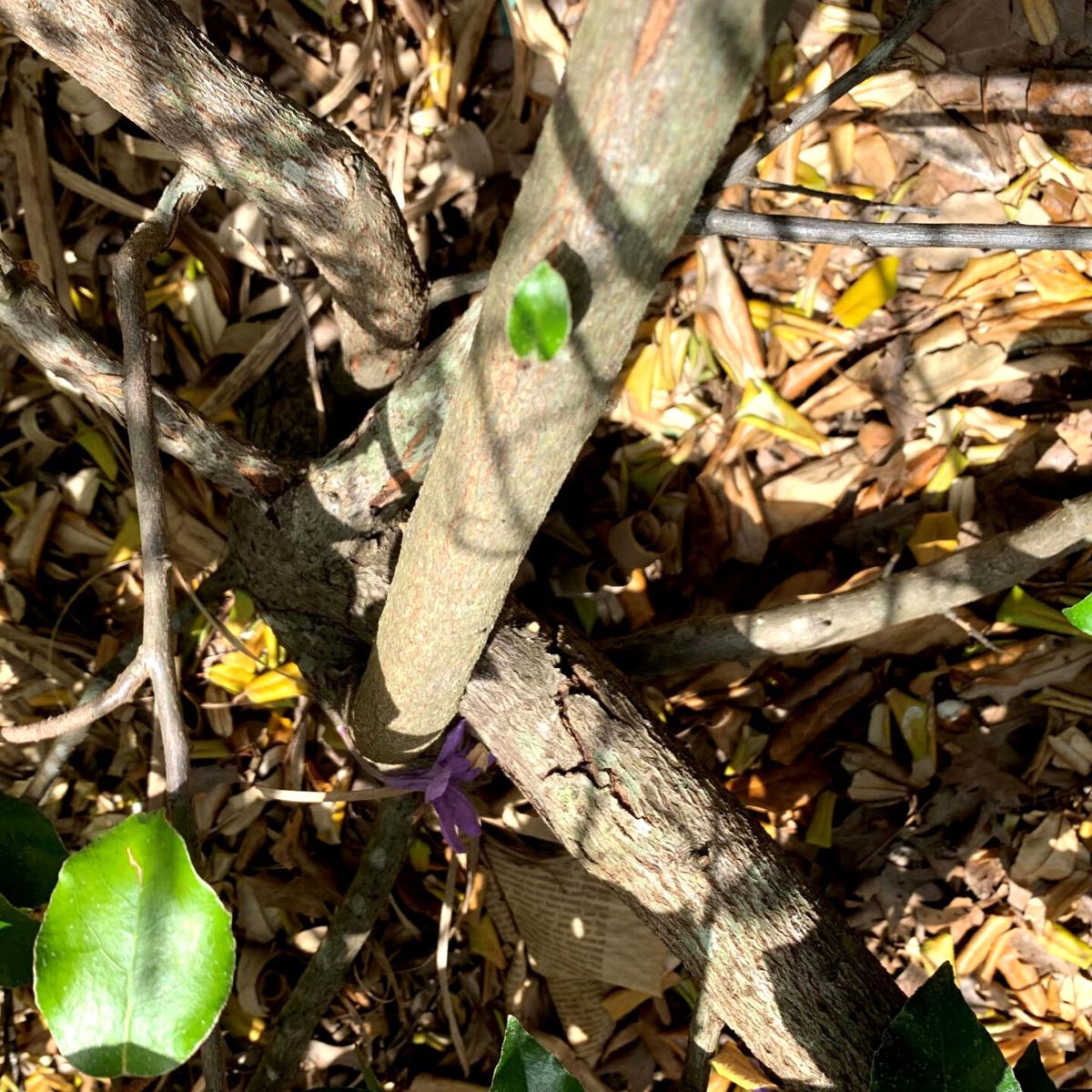 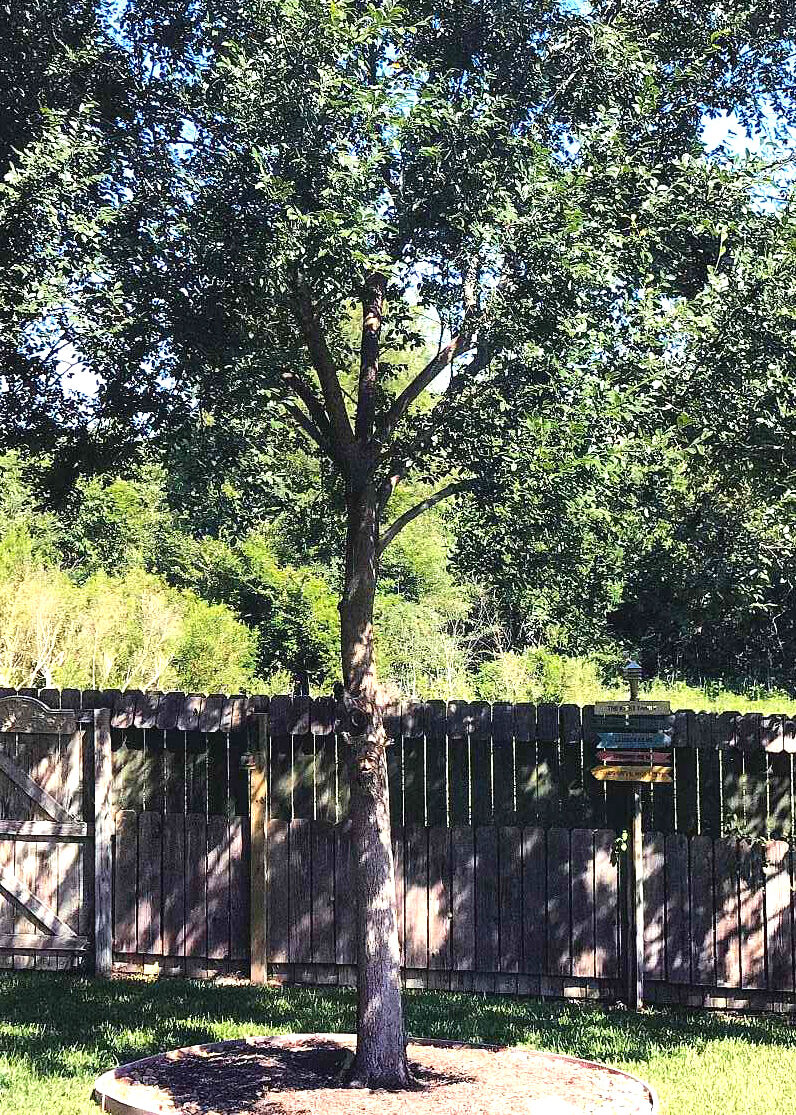 Elaeagnus, dying on one side, might not be salvagable

Q. Dear Neil: I have taken care of this Elaeagnus for six years. It has thrived all that time, but now it is going downhill. Half is dying while half is thriving.The two trunks are crossing together. Should I take the dead trunk out altogether and leave the healthy one? Has the dying trunk been damaged somehow?

A. The only two things I’ve ever seen bother Elaeagnus in Texas landscapes are lacebugs and cotton root rot. With lacebugs you’d be seeing tan leaves all over the plant. (See lantana question this column.) I don’t see those. With cotton root rot, a part or all of the root system is killed quickly and the top dies as well. It’s only prevalent in alkaline soils. You could try adding agricultural sulfur to the soil around the surviving stem, but I doubt if that’s going to make much of a long-term difference. Otherwise, it may be time to think about a replacement.

Q. Dear Neil: We noticed wounds on our 8-year-old lacebark elm a while back. I also noticed the tree weeping occasionally from the leaves, and there were leaves in the top canopy that would turn yellow. The tree has always been healthy. Is there anything we can do to save it?

A. Have a certified arborist work with your tree each year during late spring or summer to keep tabs on what’s going on. However, I don’t see any serious threats to it in your photos. The split in the trunk is a concern, but it looks like something old that is trying to heal. I do not see enough yellowed leaves to worry me at all. That yellowing is not uncommon as a tree goes from cool, moist spring weather into the blast furnace of summer. I am concerned about what look like stubs of branches about the height of the fence. They could spell long-term trouble for the tree. They need to be re-cut flush with the trunk.

Q. Dear Neil: What might have caused the round, bare patch in our St. Augustine? I find no signs of insects, and we do have a lawn care company spray the lawn every two months.

A. Honestly, I can’t tell with just those facts available to me. It looks like the grass is more than eager to grow right back to cover the bare spot, so I’d dig some plugs from elsewhere in your yard and help that happen. Brown patch shows up in perfect circles, but it doesn’t kill grass completely (just the leaf blades). Take all root rot, gray leaf spot, chinch bugs and grub worms would not be in circular patches. This looks more like something was laid on top of the grass for a few days or weeks and killed it. Perhaps a trash barrel or small wading pool. Maybe there was a spill of a chemical or fertilizer and it washed out in a circular pattern. I just can’t tell.

Q. Dear Neil: This is a Belinda’s Dream rose that I’ve had in my landscape for more than 10 years. It typically blooms from spring clear into October. This year, however, it only bloomed in its first round in the spring and not since. I have numerous other varieties in our landscape, and they all are blooming poorly this year. I pruned them back by two-thirds in February, just as I always do. Any suggestions?

A. Looking at your photo, I would judge that the bed needs nitrogen. The nandina is looking rather pale, and nitrogen would also help stimulate new growth on the rose. New buds will be produced on that new growth. I’ve looked as closely as I could, and I don’t see evidence of rose rosette virus on the plant. I always worry about it first and foremost, but these shoots look normal. Look at the photos I have left archived on my website to see what RRV looks like, just to be sure you don’t have it without knowing. https://neilsperry.com/notes/2018/04/rose-rosette-virus/

Q. Dear Neil: I just wanted to say “Thank you” for your advice last year on dealing with my cannas and their leafrollers. Look at how nice they look this year following what you suggested!

A. Wow! Well done. My suggestion, readers, is always to apply the systemic insecticide Imidacloprid as a soil drench several weeks prior to when the machine-gun-like holes start to appear in the plants’ leaves. Usually that’s going to mean treating in late May or early June.

Q. Dear Neil: I have a pineapple guava that I planted four years ago. It has barely grown, and it has produced no fruit. It’s in full sun. Should I fertilize more often? What type of fertilizer? Where are they best suited in Texas?

A. That does indeed sound like a fertilizer issue. I would use an all-nitrogen food with upwards of half that nitrogen in slow-release form. That’s basically the same fertilizer you would use on your lawn, but be sure it has no weedkiller included with it. Applied in early April, early June and early September, it should stimulate new growth. They are best adapted to the southern half of the state.

Q. Dear Neil: We have a bed of hardy lantana that has developed rust and very few flowers. What is wrong?

A. This is not a disease. It’s lace bugs. They do the same thing to many types of plants. You can kill them fairly easily with most general-purpose insecticide sprays, but for future reference, do so when bees are not actively working the flowers. The systemic insecticide Imidacloprid is a good preventive for non-flowering plants such as Boston ivy and boxwood.

SPERRY: Peach borers not easy to get rid of for homeowners

Q. Dear Neil: My peach tree is 2 years old. I’m seeing globs of sap on its trunk. What should I do?