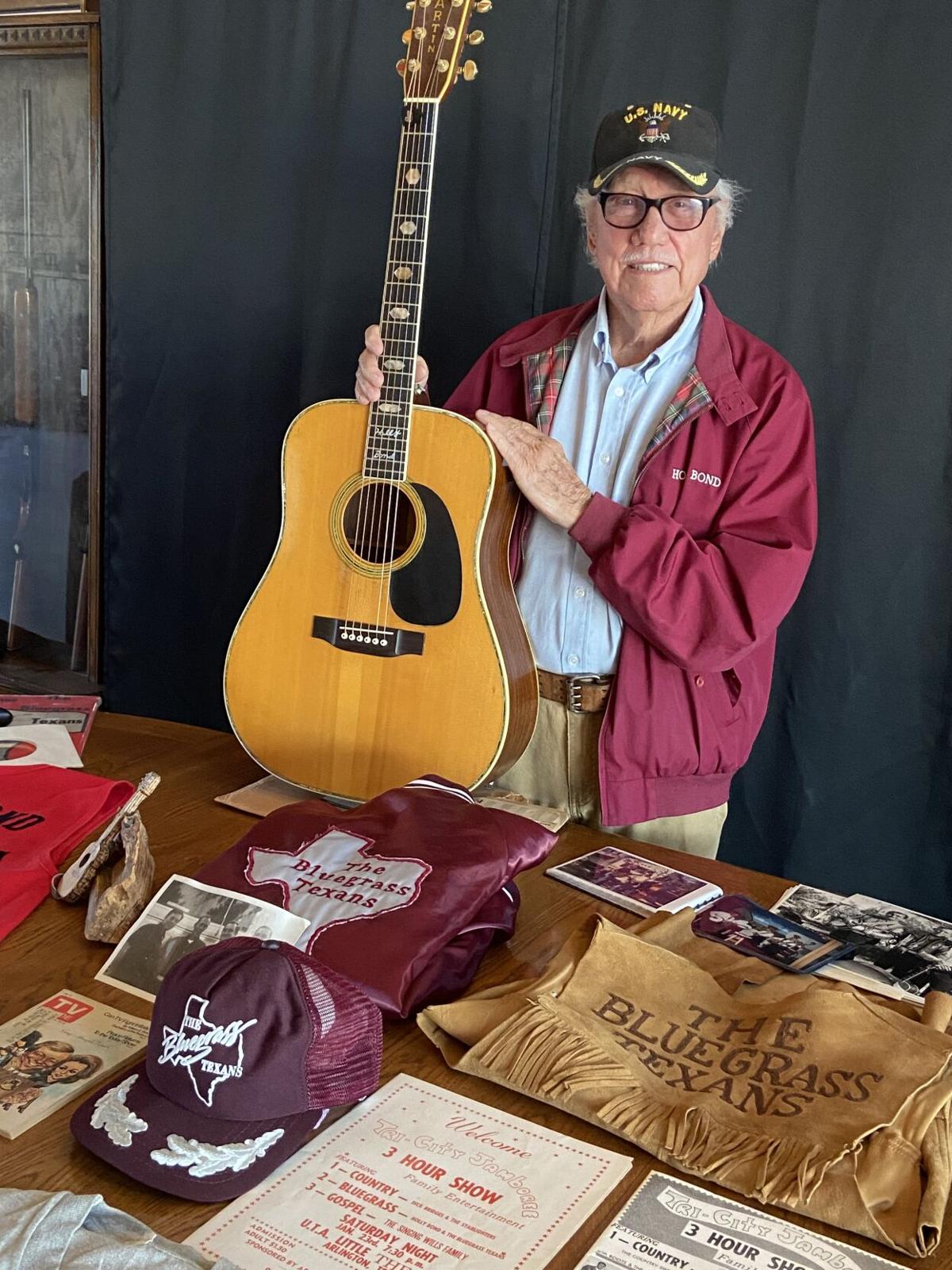 Holly Bond is pictured with memorabilia collected during his 35-year-career as lead guitarist and vocalist with the Bluegrass Texans. 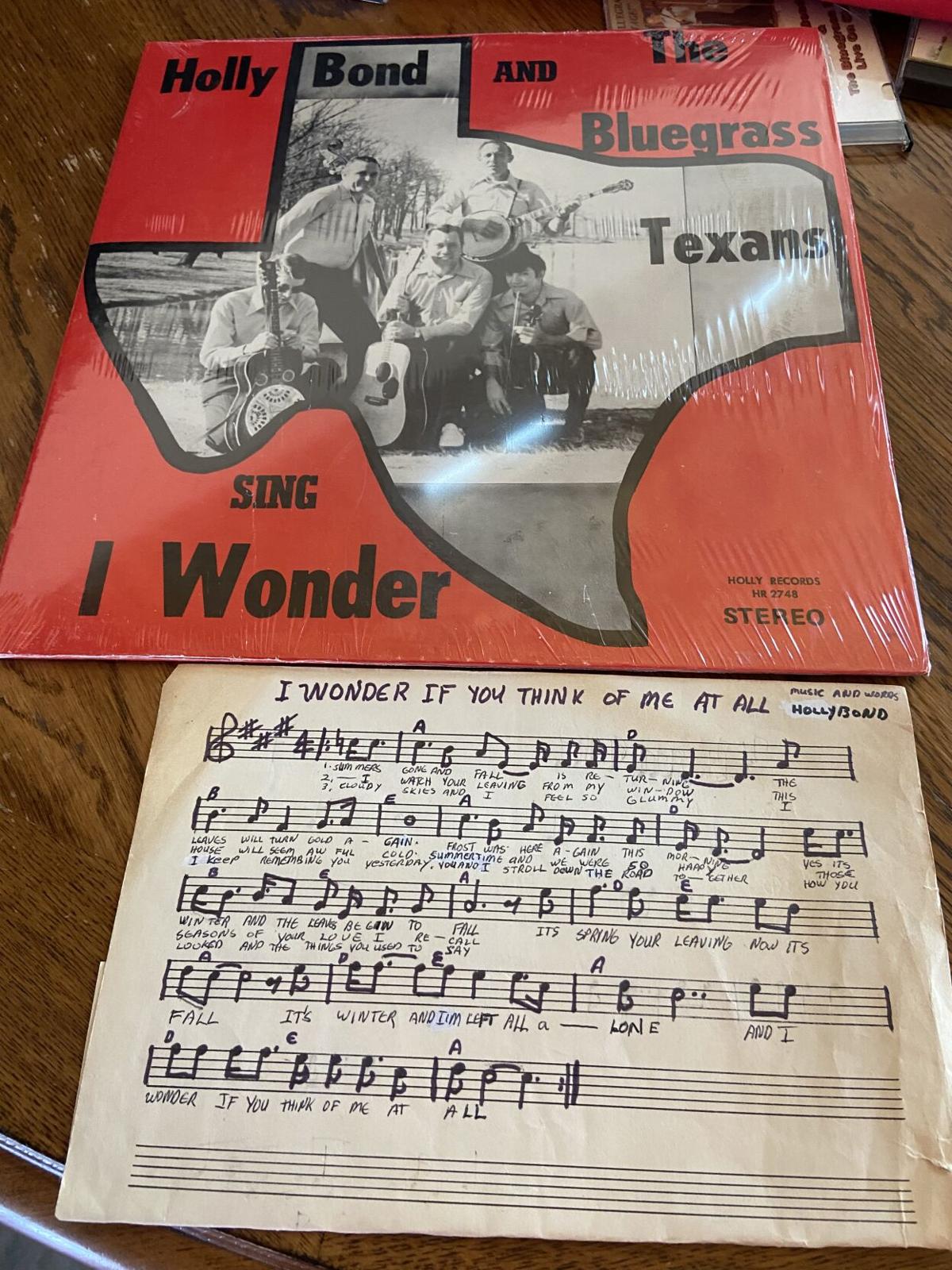 Album cover and music script for “I Wonder If You Think of Me at All.”

Holly Bond is pictured with memorabilia collected during his 35-year-career as lead guitarist and vocalist with the Bluegrass Texans.

Album cover and music script for “I Wonder If You Think of Me at All.”

“There’s just something about bluegrass music that touches your soul,” the former owner of Holly Bond Music in Reno said last week from his ranch near Monkstown in Fannin County. “It gets inside of you and makes you feel good.”

Bond’s influence on Texas bluegrass is recognized in “Texas Bluegrass History: High Lonesome on the High Plains” by Jeff Campbell and Braeden Paul, an inclusion Bond said he was recently surprised to learn about himself and his band, The Bluegrass Texans.

“I knew I had been mentioned in a 2004 article and had been interviewed last year, but never thought this book would include my band as one of the major influences in the history of Texas bluegrass,” Bond said as he modestly added, “It’s the music that’s important, it’s not anything I’ve done.”

When one of the book’s authors called Bond last fall to inquire if he played bluegrass music, Bond said, “Well, it wasn’t called bluegrass back then, it was just country music. Then some people began referring to us as ‘those bluegrass people’ and the genre took off.

“It’s not about me; it’s about the music, just like the Red River Valley Veterans Memorial,” Bond said of his relationship with bluegrass, comparing his involvement to that of his involvement in the beginnings of the Red River Valley Veterans Memorial, along with memorial founder Dave Weiberg. “We will pass on and nobody will remember us, but they will benefit from the music and the memorial.”

Bond credited bluegrass music as being a “top crowd drawer” across the United States.

“It’s right up there with country and pop music,” Bond said. “That’s the reason these guys decided to write something about Texas bluegrass.”

Born June 18, 1934, in Mississippi, Bond was exposed to music from an early age as most of his family played acoustic instruments, according to the book released last week. Like other aspiring artists, he listened to Bill Monroe, Lester Flatt, Earl Scruggs and Jimmy Martin as well as other styles, including Cajun music coming from New Orleans.

During his teenage years, the family moved to Texas, first to Houston and then to Arlington in 1952. After serving in the U.S. Navy during the Korean War, Bond settled in Arlington and began a long career with the Arlington Fire Department while playing bluegrass and country music on the side along with a Dallas police officer on bass and a used car dealer on banjo. A fiddle player soon joined the group, and the Bluegrass Texans was born.

In 1968, the group recorded their first single, “Make Me A Pallet on the Floor,” which received airplay on Bill Mack’s overnight country radio show on WBAP based in Fort Worth. The next year, the group won The Original Amateur Hour, considered to be the precursor of television talent competitions, such as “America’s Got Talent” and “Star Search.”

In 1972, the group cut their first album, “I Wonder,” which featured several bluegrass standards as well as songs Bond wrote, including “I Wonder If You Think of Me at All.” Soon afterward, the band began playing on “The Cowtown Jamboree” televised live at Panther Hall in Fort Worth where they opened for many country music stars such as Jerry Lee Lewis, Dolly Parton and Hank Williams Jr.

The group then began appearing at bluegrass festivals and other venues throughout the Southwest, first traveling in a tour bus they called “Big Red” and in later years in a motorhome. As late as May 2014, the group of retired musicians appeared at the Reilly Springs Jamboree south of Sulphur Springs.

Last weekend, I watched a little Canadian film called “The Grizzlies,” a true story that I can’t seem to get out of my head.

Would you have chosen McConaughey for governor?

Actor Matthew McConaughey has announced he won’t be challenging incumbent Gov. Greg Abbott, a Republican, for the seat in the 2022 election. In a video posted Sunday night, he said political leadership was not a route he was choosing to take “at this moment.” Polls had shown McConaughey would have been a significant threat to Abbott and his Democratic challenger Beto O’Rourke. Would you have voted for McConaughey as Texas governor?