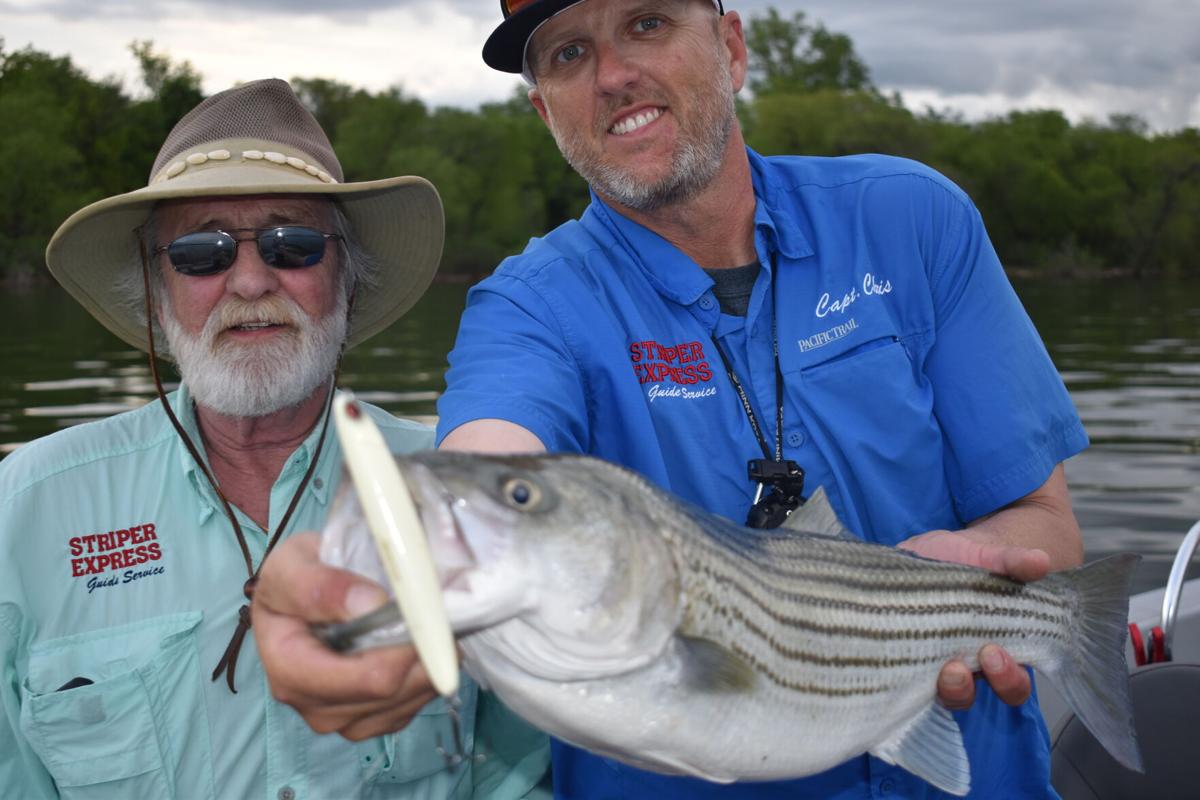 Bill Carey and his son, Chris, with Striper Express show off one of many stripers landed on topwater plugs last week. The topwater bite is as good as it gets right now at Lake Texoma.

Guide Chris Carey with Striper Express eased the throttle back on the Falcon Super King guide boat, and we gently glided up to the windward side of an island. There was just enough light to cast our big topwater plugs. A gentle breeze caused surface ripples on the water, and the sky was threatening rain. But we didn’t really care about the rain if it came, just as long as there was no accompanying lightening. A glance at radar on Chris’s phone indicated a break in the precipitation.

Chris, his dad, Bill Carey, and Jeff Rice, Larry Weishuhn and I were eager to experience what promised to be an outstanding morning of topwater striper fishing. We had our rain gear and were eagerly anticipating what we hoped would be a topwater striper bite that matched the near perfect conditions. We were not disappointed.

For the past couple weeks, the topwater bite on Texoma has been as good as it gets. Early summer is traditionally the best time for catching stripers on topwater plugs here. The drill on sunny days has been blind casting big topwater plugs up shallow and catching roving stripers there feeding upon the abundant shad. This bite usually lasts a few hours, and then it’s time to switch to jigs and continue to catch the stripers sub-surface. On overcast days, the stripers often continue feeding on the surface throughout the day. Such was the case on our trip last week.

This was Larry’s first time to fish Lake Texoma. As he mentioned, he has traveled the world hunting, filming his TV shows and occasionally fishing distant waters. For many years, he has heard all about the spectacular striper fishing this great lake provides; it was time he finally experienced Texoma for himself.

Larry was the first to get his bone-colored Pencil Popper in the water. There was just enough light to cast as I watched his bait make a rainbow trajectory and land with a fish attracting “splat” as it hit the water. His cast was not a long one, maybe 30 yards from the boat. As he began popping the bait back in, I heard what sounded like someone throwing a small pig into the water. Larry had hooked a big one and on his first cast. Chris was ready with the net and Jeff had his video camera rolling, capturing all the action for the current episode of “A Sportsman’s Life” show we film each week.

Bait presentation is important regardless of what type fishing one does, but especially so when working topwater baits. Tried and true topwater plugs such as the Pencil Popper or Zara Spook are designed for a “walk the dog” presentation where the lure darts side to side during the retrieve. This action is easily accomplished by a steady popping of the rod tip accompanied by a fast crank of the reel handle. Today’s fast retrieve reels, such as the Sixgill bait casters we were using, make perfecting this retrieve much easier than the reels used when these baits first hit the market years ago.

Enticing aggressively feeding stripers to hit these plugs is pretty simple, but getting them hooked often requires nerves of steel and the patience of Job. When a striper hits a baitfish on the surface, its intent is to kill or disable it. Once its meal is immobilized, the baitfish is easy pickings and instantly becomes breakfast. The trick for the fisherman, especially one like me who is accustomed to setting the hook on a bass tap-tapping on a plastic worm, is to wait until the rod loads up, and the weight of the striper is telegraphed up through the line into the rod and ultimately into your hand. One’s natural response when seeing a big fish engulf his topwater bait is to jerk back. But the proper response is to let it sit and then give it a gentle pop or two. The vast majority of the time, a striper in the eat mode will instantly nail the bait again, harder this time and get himself hooked. This is topwater fishing fact, and something I have known for many years. but each time I experience a red hot striper topwater bite with multiple hookups, I have to relearn the basics. I simply get excited on the first couple of blow ups and have to gain control over my reflexes.

As Capt. Chris Carey pointed out, not every shallow bank will hold actively feeding stripers this time of year. The key is locating shallow flats, water sometimes as shallow as 3 feet, close to deep channels that stripers use as travel routes.

Stripers use these deeper channels as routes or highways. They cruise the channels and scout adjacent flats where they instinctively know baitfish (shad) spawn. On sunny days, they remain up shallow, feeding upon the hapless shad until the sun gets up and then with a few flips of their tail they are back in deep water. Shallow water in close proximity to deeper channels is the key to locating these surface feeding fish. This current pattern is expected to hold steady the next few weeks, then it will be time to again resort to fishing sub surface primarily with Roadrunner type jigs but, the early morning topwater bite can occur anytime throughout the summer.

Watch for the video of this exciting topwater striper trip on “A Sportsman’s Life,” available on YouTube or Pride Outdoor Network on Roku.

OUTDOORS COMMENTARY: A fishing trip salvaged with a bit of grain

The big fish bite for trophy blue catfish has slowed as always this time of year, but now is a time of plenty for anglers wishing to target the eater fish weighing between 2 and 10 pounds.