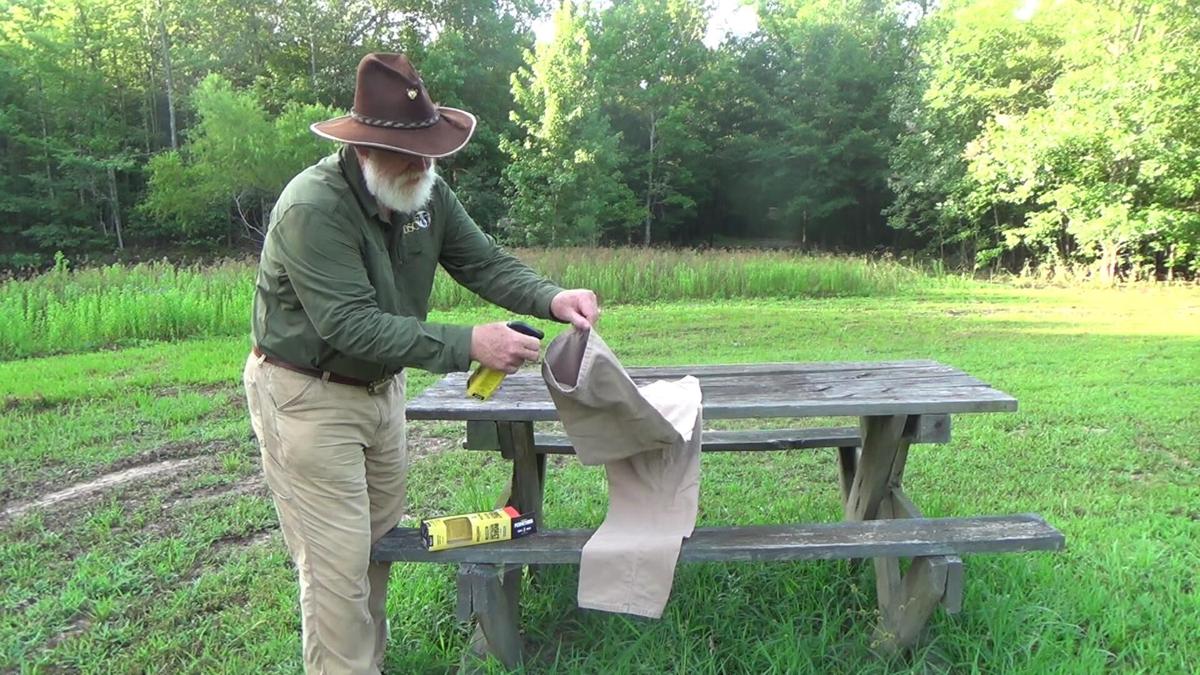 Larry Weishuhn sprays down with Sawyer Permethrin in preparation for a summer hog hunt.

Folks who hunt with me will concur that I have a habit of ignoring smart precautionary measures to keep myself safe from critters in the outdoors. I’m not talking about ferocious wild boar or protective sow bear with cubs, but rather insects that present a very real threat of doing bodily harm, and snakes.

A hog hunting trip a week ago with Larry Weishuhn is a good case in point. We were at our friend Jeff Rice’s ranch and making ready for the evening hunt. As most hog hunters know, wild porkers this time of year spend midday in the shade, usually around water and become active just before dark, about the time mosquitoes begin to buzz.

Before heading out to hunt, I watched Jeff pack his Thermacell to use against mosquitoes in the blind he and Larry would be hunting from. I watched Larry spraying a heavy coat of Sawyer Permethrin insect repellent on his clothing a bit earlier in the afternoon. While assembling my gear for the afternoon hunt, I completely ignored what was to come with the setting of the sun — mosquitoes and probably lots of them.

Midsummer is also prime time for a heavy tick infestation, which means Lyme Disease and Rocky Mountain Spotted Tick Fever are very real threats. It’s not like this was my first rodeo. I’ve spent a lifetime in the outdoors. I was simply continuing with a bad habit I developed through the years of not worrying about biting bugs until they began biting.

I planned to hunt from the ground near a corn feeder, and earlier in the day, I set up a camp chair in a thick patch of woods oats, a plant that grows about 3 to 4 feet high. My blind was situated about 25 yards from a creek. While sitting up my hunting spot, I gave absolutely no thought to the hordes of mosquitoes that would be buzzing in the thick cover later in the day.

All settled in about an hour before dark, I was completely comfortable in my little chair, hoping to shoot a hog just before dark. The feeder was near the creek and the sign around the area looked like a hog feed lot. And then, about 30 minutes before dark, when I needed to remain perfectly still in anticipation of the hogs, clouds of mosquitoes moved into the dense vegetation around me. I was wearing a short sleeve camo shirt and was continually swatting mosquitoes that were hard at work on every inch of exposed skin on my body. It was virtually impossible to concentrate on hunting while being continually drilled by mosquitoes. To incoming hogs, I probably looked like the flagman at a racetrack.

Did I mention I was wearing low boots instead of high top boots that were snake proof? Oh, I had my snake boots back in the truck, but it was just too hot to wear them, or so I thought. When I headed back to camp that evening, I encountered two water moccasins in the glow of my flashlight. The next day, my arms were covered with mosquito bites as well as one really ugly bite that appeared to be from a spider.

As an outdoors writer the past three decades, I have tried to share good information that will make your outings more fun and safe, but when it comes to protecting myself from the creepy crawlers in the woods, I haven’t always practiced what I preached. No more, I’ve turned over a new leaf — finally!

HOW I SHOULD HAVE PREPARED: In retrospect, I should have used some of Larry’s Sawyer Permethrin and given my clothing and snake proof boots a heavy spray. Larry even sprays the inside of the bottom of his pant legs for added protection. It’s recommended to give clothing a good spray, allow it to dry and the clothes are bug proof for six washings. The repellant is proven effective for killing or repelling mosquitoes, spiders, chiggers, mites and over 55 other insects.

Permethrin is the synthetic version of pyrethrum, a natural occurring insecticide in the Chrysanthemum flower. Permethrin is also effective when used around campsites when sprayed on tents, sleeping bags, etc.

After doing a bit more research, I learned about Sawyer Picaridin, which can be applied directly to the skin via spray or lotion. Picaridin is derived from piperine found in black pepper and is effective up to 14 hours against ticks, mosquitoes, biting flies, gnats, chiggers and sand fleas.

I could continue with a plethora of details about ways to keep yourself safe in the outdoors, but suffice it to say I plan to have both these products from Sawyer in my day pack on future outings during warm weather months which, in our part of the country, constitutes much of the year.

So, from now on, I vow to always spray down or use a Thermacell or both before venturing out on a warm weather hunt or creek fishing trip. And no more leaving those high topped snake proof boots in the truck simply because I think they are too hot. Better safe than sorry is my motto going forward. I hope you’ll take these tips to heart and keep yourself safe as well.

OUTDOORS COMMENTARY: Try something new in the outdooors

Looking back on well over a half-century spent as a very active participant in all sorts of hunting and fishing endeavors, I’ve come to the conclusion that it’s more fun to diversify than stick with one method of hunting, or fishing for that matter.