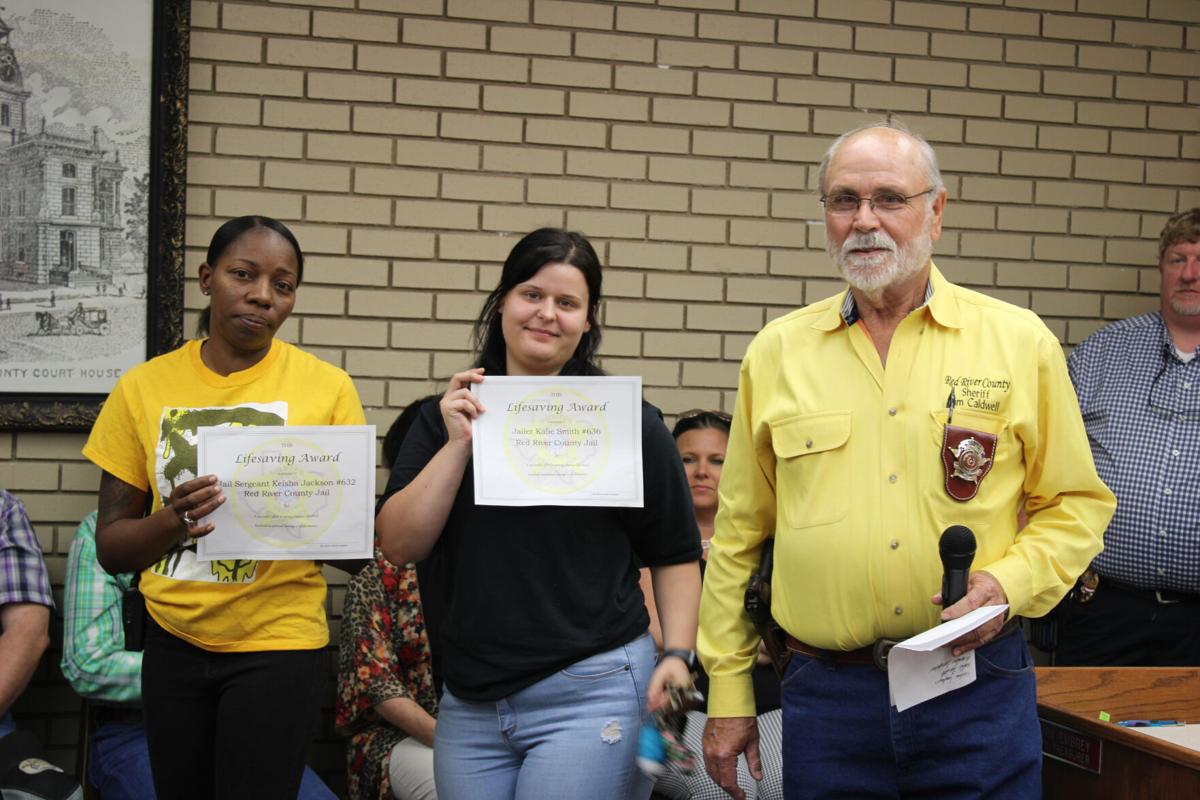 Jail Sergeant Keisha Jackson, left, and Jailer Kalie Smith, center, were given the Lifesaving Award for saving the life of an inmate who had attempted to hang himself. They stand beside Sheriff Jim Caldwell. 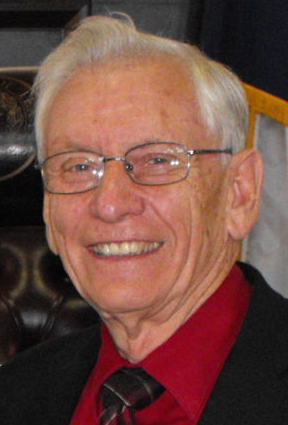 CLARKSVILLE — Following a heated meeting flooded by public forum participants and attendees, the Red River County Commissioners' Court caved to pressure and tabled an agenda item that would give deputies — and only deputies — a pay raise. Future discussion on the topic will take place at a budget meeting, the date for which has not yet been announced.

Public speakers campaigned for an increase in the hourly pay for Red River County Sheriff’s Office deputies from the current wage of $13.50 per hour. Among the speakers were members of the sheriff’s office who told stories of their service while requesting a raise for all employees, including dispatchers.

Sheriff’s Investigator Samantha Sellers, who rallied others to petition the Commissioners’ Court to make change, put her job on the line for it, saying she would resign unless “the right thing is done.” Sellers said 50% of available deputy positions are filled at the sheriff’s office, leading to deputies working overtime without pay. Instead, they are offered comp-time, a program that gives them 1.5 times as much vacation time as they worked overtime. However, Sellers said, they are not able to use the time they have earned due to being so short-staffed.

Sellers proposed increased pay as an incentive to draw more law enforcement officers to Red River County. Upon learning only deputies might receive pay raises, she threatened to leave her position.

County Judge L.D. Williamson said it was impossible to provide raises for all sheriff’s office employees without a tax increase. Red River County’s property tax rate at 80 cents per $100 valuation already tops those of neighboring counties, he said.

Williamson said commissioners have already approved health insurance coverage and other benefits outside of salary for the sheriff’s office, and he reminded the public that when the county made Covid-19 pandemic employment and financial cuts, every department saw a cut except the sheriff’s office.

Following the public forum, an opportunity for discussion on the topic opened, which was predominantly taken up by Sellers and Patti Haney, another attendee. Sellers suggested money be taken from grants to pay for the increased pay raises. Williamson countered, saying grants could not sustain increased pay for more than a year, after which he would be forced to raise taxes to maintain the same level of pay for the officers. Sellers asked if the amount allotted to pay for unfilled positions could be used to fund the pay increases for the remaining sheriff’s office employees. Williamson denied the possibility, saying a certain amount of money had been included in the budget for emergencies, and that once it was allocated to a specific area, it could never be moved, not even with tax or budget revisions.

Sellers challenged the commissioners further, saying new businesses would not come to a county with high crime rates. Williamson said he had only ever had one incoming business ask about anything related to law enforcement.

Haney also declared a high likelihood that Red River County would not have a sheriff’s office at all next year.

Williamson said he could not control whether non-elected officials stayed or left the county, but the sheriff’s office would exist as mandated by the state, regardless of whether anyone was able to staff it.

Discourse was ended by a Commissioners’ Court motion to table the topic.

After the meeting, Sellers said she offered to resign “because of my integrity.”

“It’s not right that the people protecting my life don’t get paid any more and they don’t get a raise, but I do. And that’s not a right, and it’s a question of my integrity. And once again, I’m a citizen of this county. I don’t have to work here to still be involved,” she said.

“We have 10 patrol deputies fully staffed. We have five on patrol right now. I got a call over the weekend; we had one deputy on, we had four priority calls, meaning life or death, and I got dressed and came to work.”

Williamson pointed to a lack of funds, saying there just isn’t enough money to fund raises for the entire sheriff’s office.

“Not at a dollar and a half or $2 an hour, and that’s what they’re asking for. We can’t fund that much. The question is, do we fund just part of the department? There’s 12 deputy slots, and we can fund that many people. We can’t fund 30 down there with the money we have available,” Williamson said.

“We’re going to start budget workshops quick. We got to. We try to be fair with every employee. Every employee is important to me. And I know the sheriff’s department is very important, but all of our employees here, if it wasn’t for them paying the bills, they wouldn’t have electricity down there. They wouldn’t have water down there,” Commissioner Donnie Gentry said.

Residents in Northeast Texas say the signs point to an increased likelihood of Marvin Nichols Reservoir being built, so they’ve formed a group to oppose the lake.