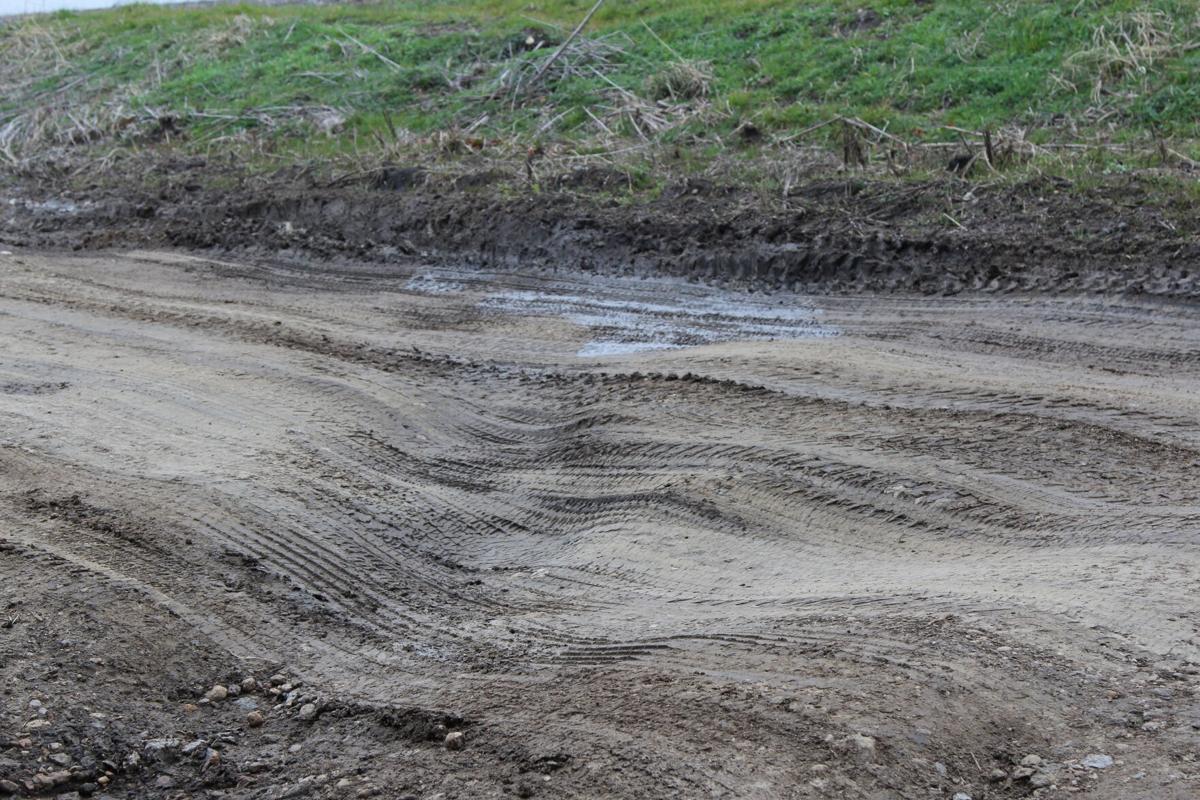 A damaged road in Precinct 1 makes for a bumpy ride. Some Lamar County commissioners are hoping to secure a certificate of obligation to help with road repairs. 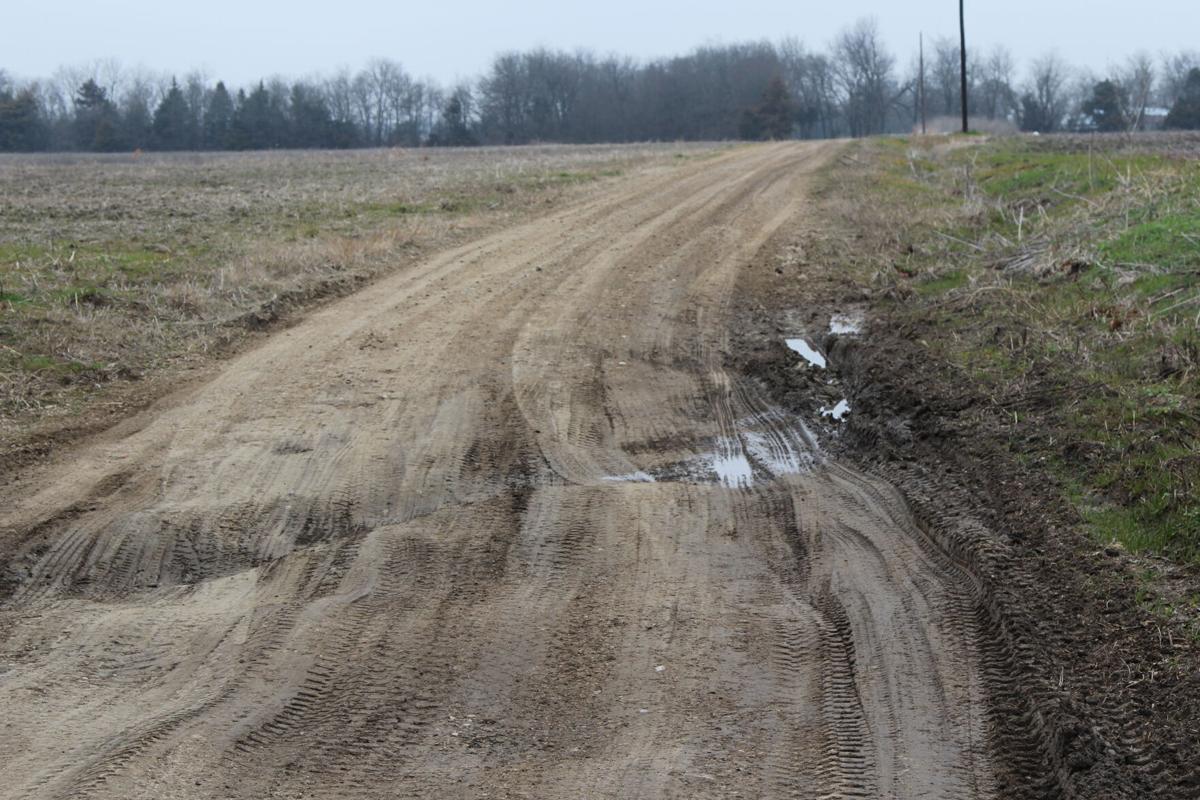 When ditches fill in on the sides of roads, it causes poor drainage and damage.

A damaged road in Precinct 1 makes for a bumpy ride. Some Lamar County commissioners are hoping to secure a certificate of obligation to help with road repairs.

When ditches fill in on the sides of roads, it causes poor drainage and damage.

Lamar County Commissioners Ronnie Bass and Alan Skidmore bounced around in a truck Tuesday afternoon, touring through Precincts 1 and 3 to review roads in need of repair.

“Can you see where it’s just tore up?” Bass said, pointing to various potholes and the edge of a county road, cracked and sloughing off.

“(Residents) have every right to call in and complain,” Skidmore said.

The source of the problem

The main culprits for the damage, Bass said, are years of wear and tear and, more recently, heavyweight trucks used for transport by local industries, namely solar farms and trailer manufacturers. What makes it worse, he said, is an ever-shrinking county budget.

“The GPS routes (the trucks) the shortest way, but these county roads weren’t meant for trucks like these,” Bass said.

Leaning forward in the cab of the truck, he pointed to an 18-wheeler loaded up with freshly manufactured trailers destined for drivers across the country. The county roads many of the trucks travel down are decades old and were meant for cars and pick-ups, he said. The sheer weight of the semi trucks degrades the small roads that aren’t constructed with a solid base like highways or city roads.

Bass and Skidmore have had to use stopgap measures, like putting up “No Thru Trucks” signs at the entrances to damaged county roads to try and reroute the semis to main roads that can withstand their weight. Truck drivers caught in violation of the rule can be fined by any law enforcement officer, but that doesn’t often happen, Bass said.

“I don’t want to do anything to hurt the citizens (and industry) because that’s their living, but it’s not working,” Bass said.

An effective county road is one that sits above the water table, with clear ditches on each side and unblocked culverts that keep water flowing away from the roadway. As the roads deteriorate, however, ditches on either side fill in and water begins to sit on the road or flow across it, causing rapid damage.

Roads that can bear more weight are reinforced underneath with concrete or lime and then covered with chip-seal. Oil-based roads are more difficult and expensive to repair, especially in colder months as the oil becomes more viscous, Skidmore said.

Bass’s mantra is “do it right the first time,” saying he wants high quality repairs for the roads in his precinct that will last, not — often literal — patchwork measures. Each precinct has a team of six full-time road hands who, Bass and Skidmore said, work diligently to repair damage, but the resources are limited and equipment is dated. Some of Bass’s machines are more than 30 years old.

He’s hoping to secure funding that would allow for more supplies and equipment, but there are issues that stand in the way.

Nearly every meeting of the Commissioners’ Court, road repairs and Road and Bridge budgets appear on the agenda. It’s been a persistent problem that generates concerns and complaints from residents who need to drive down damaged county roads for their daily commutes, but the money needed to alleviate the problem just isn’t in the budget, Bass and Skidmore said.

“You could literally use your whole budget on one road,” Bass said.

Adding to financial struggles is Senate Bill 2, the Texas Property Tax Reform and Transparency Act of 2019, which was passed in a bid to keep property taxes low — and it has for many communities — but it’s left some local governments struggling for funding.

For Lamar County commissioners, limited funding due in part to SB 2 has meant delayed road improvements and repairs.

The bill limits the growth of property tax revenue to 3.5% from the year prior, but it does not account for rising property values. Even if the tax rate stays the same — currently it stands at 38.39 cents per $100 of appraised value for Lamar County — property tax revenue still grows as property valuations grow. If that growth is more than 3.5%, either tax rates need to go down or commissioners can put it before voters and hope their explanation of need will earn voter support.

The tricky part for the Lamar County Commissioners’ Court, Bass said, is that regardless of the amount of revenue the county brings in, his budget for roads and bridges is based on the rate, not the revenue, so if the rate goes down or stays the same, his budget follows suit.

With the current rate of 38.39 cents, 8 cents of that goes toward the Road and Bridge Fund, but that’s divided between the four precincts, meaning each precinct is allocated just 2 cents per $100 of property value. Lamar County’s total tax rate is low compared to other counties in Northeast Texas, like Hopkins County, which has a rate of 69.49 cents.

Bass was clear that he wants to keep taxes low for Lamar County residents, but he is facing increasing challenges doing the work with ever smaller budgets. So, he needs to find another way. He said he’s in desperate need of new equipment — and that’s where a certificate of obligation comes into play.

Certificates of obligation allow governmental bodies to take on debt without raising taxes and without requiring a vote, like a bond. COs can be used to pay for anything from public works projects to contracting fees, and while they were initially created to give emergency spending to local governments, they are more recently being used for capital improvement projects, like the roads, according to the Texas Public Policy Foundation.

At Monday’s meeting, Bass introduced a motion to get a financial advisor for the county to develop a timetable “to secure financial assistance for capital improvement on county roads” as well as needed improvements at the county jail. It passed with Commissioner Lonnie Layton in opposition and County Judge Brandon Bell abstaining. Bass said if the Commissioners’ Court could be convinced to go for a CO, it would be able to purchase supplies that would make for long-term repairs, particularly equipment like a recycler and soil stabilizer that would repair roads in one pass.

Bass and Skidmore said the CO, if passed, would take on a couple million dollars of debt for the county, which they said might sound like a lot of money but Bass drew a comparison to the $51.55 million bond proposed by North Lamar ISD, saying he feels it’s a drop in the bucket and could alleviate the extensive road repair issues.

Bell said he doesn’t want to say no now, but he wants to do more research into the impacts of a CO before moving forward with anything. Accruing more debt is something he’s not a fan of, he said.

“I would say I’m still in the information gathering phase, and so I don’t really want to commit at this point,” Bell said Wednesday. “I will say that I have an aversion to debt. That’s kind of controlling my thoughts on it right now.”

He said his worries stem from potential effects a CO could have on the county down the line.

“I don’t want to burden future budgets and future taxpayers with this huge amount of debt,” Bell said, concerned about having to pay off the debt in years to come.

Bass suggested at Monday’s meeting that money generated from the several vast solar farms under construction in the county would help to pay off the debt the county would take on from a CO. Bell responded, saying he was uncertain about the future of the farms.

“We can use that money.”

Bass said he wants nothing more than to work together with Bell and the rest of the commissioners to improve the roads, saying he feels lucky to be working with them. He wants a solution that keeps taxes from rising and satisfies the leaders of each precinct, he said, but that the solution needs to be found — soon.

Comments from Commissioners Kevin Anderson and Lonnie Layton were unavailable by press time.

Needed repairs to county roads and buildings dominated the conversation at the Lamar County Commissioners’ Court meeting Monday. “Our roads are deteriorating and our citizens are really letting us know,” Commissioner Ronnie Bass said.

Drainage is needed and required for a road. Ditches can be used for drainage. But if a road can drain ditches are not necessary.