The Rivercrest High School class of 2021 leaves their seats after receiving their diplomas Friday evening at the RHS gym. 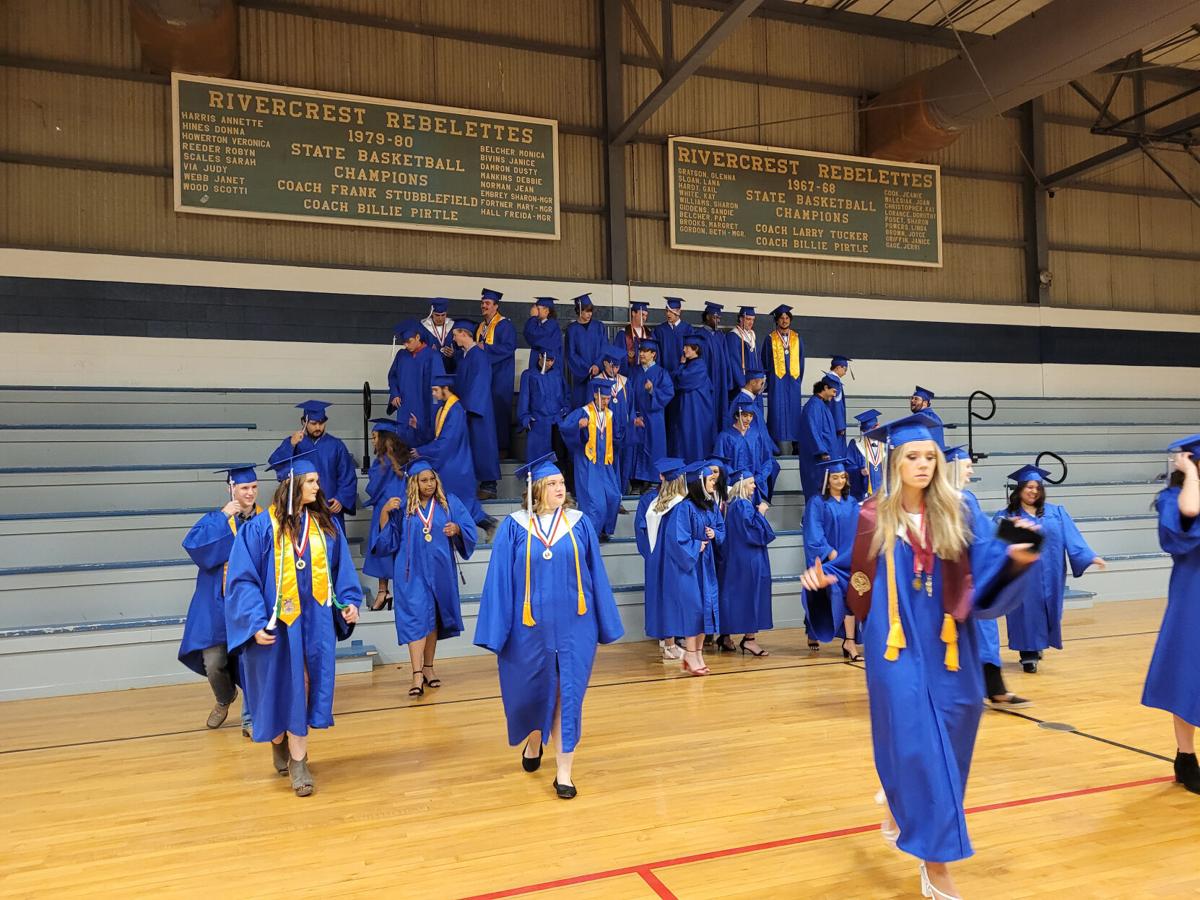 The Rivercrest High School Class of 2021 steps off of the bleachers after taking one last class photo Friday night to line up for their graduation ceremony.

A Rivercrest ISD senior reaches out to fistbump an audience member on his way out of the gym Friday evening at Rivercrest High School.

The Rivercrest High School class of 2021 leaves their seats after receiving their diplomas Friday evening at the RHS gym.

The Rivercrest High School Class of 2021 steps off of the bleachers after taking one last class photo Friday night to line up for their graduation ceremony.

A Rivercrest ISD senior reaches out to fistbump an audience member on his way out of the gym Friday evening at Rivercrest High School.

BOGATA — With all the “Pomp and Circumstance” due the solemn event, the graduates of the Rivercrest High School Class of 2021 took to the RHS gym Friday night for their graduation ceremony.

Before the big event, all 40 graduates crowded into the bleachers at the other gym for one final class picture.

“This might be the last time some of you see each other,” RHS yearbook teacher Stephanie Purviance told them. “Get your hugs in now.”

The class then lined up one last time and marched into the gym to receive their diplomas.

Principal Ronnie Alsup told the students he appreciated all of their hard work this year especially.

“This has been a strange school year, maybe even stranger than last school year,” Principal Ronnie Alsup said. “This school year was strange from the beginning, and we had to ask you to do a lot of different things just to be able to come back to school. … I’m thankful that you didn’t use this strange year as an excuse to be complacent. It would have been easy to just sit back, but you started strong and finished strong.”

The ceremony was moved indoors to the RHS gym, in case of rain, and the gym was wall-to-wall with friends and family supporting the graduates.

Alsup also recognized the student missing from the lineup, Payton Riley Bridges, who died in a motor vehicle wreck.

“We miss you, and you will always be in our hearts,” Alsup said.

The class had six students up for one of the 10 $14,000 scholarships given out by the Lennox Foundation in Red River County, and all six students from Rivercrest received the scholarship, an indication that the Class of 2021 is known and recognized for its leadership, he said.

“What makes a high school great is the student leadership,” Alsup said, “... and we have a senior class full of leaders.”

In his salutatorian speech, Bradyn English told his fellow graduates their accomplishments were due to all the hard work they have put in over the past 13 years.

“We did not make it here through luck,” he said, “but through hard work and determination.”

Valedictorian Rylie Huddleston shared that she knew her classmates would continue that excellence.

“No matter where we go after tonight, I am confident that we will be successful,” she said.

Cannon’s friend, Amaya Jeffrey, agreed, saying it was very emotional. Cannon added she planned to go on to get her masters in radiology, while Jeffrey said she plans to get her nursing degree.

Before a packed gymnasium in Pattonville, 41 members of the Class of 2021 bid farewell to Prairiland High School during commencement exercises Friday night amidst tears, cheers and laughter.