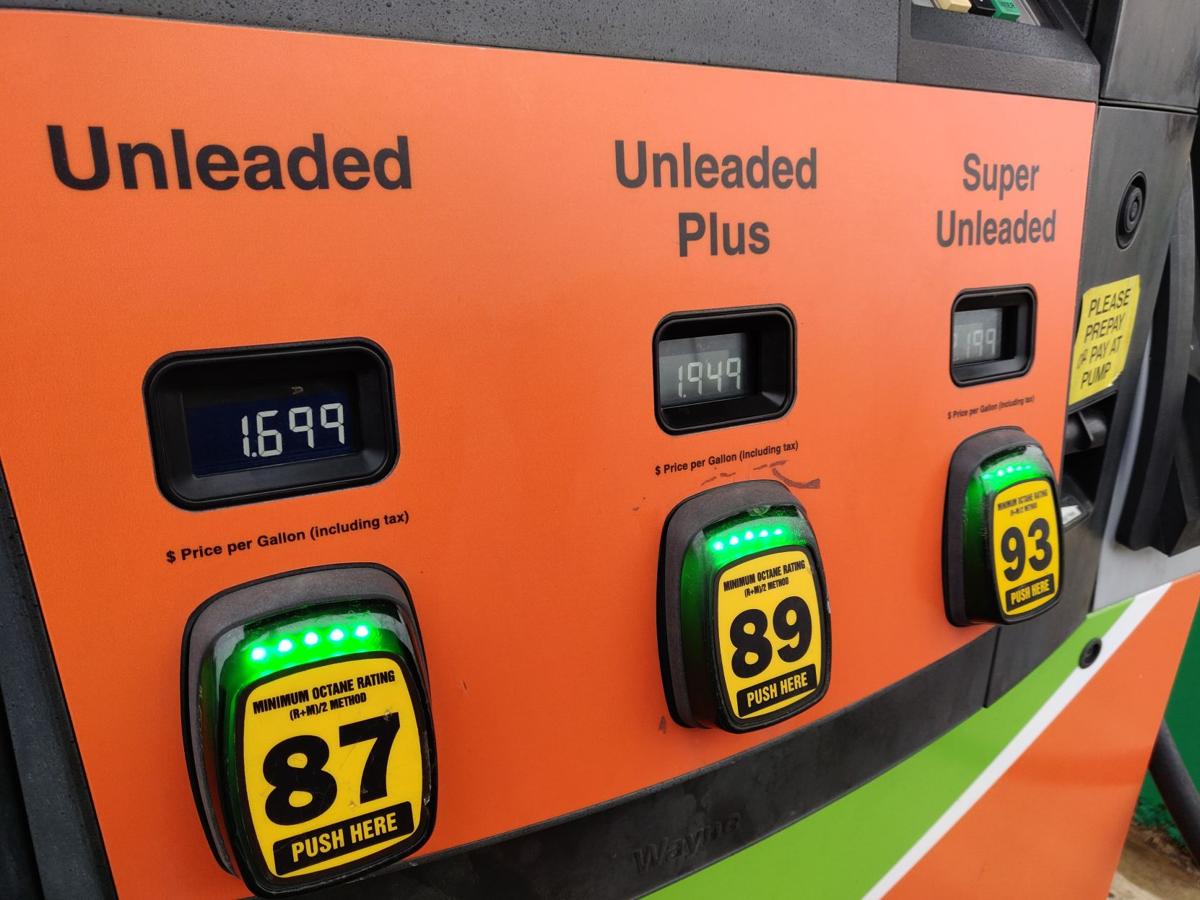 Pumps at EZ Mart on Clarksville Street show the price for a regular gallon of gas on Monday at $1.69. Prices have fallen more than 20 cents per gallon in the last two weeks to a four-year low.

Anyone not weathering the new coronavirus spread at home will discover they’re spending less on gasoline than they have since at least December 2016.

Gas prices nationwide hit a four-year low Friday as efforts to slow the spread of SARS-CoV-2, the disease that causes COVID-19, take an economic toll, and as a price war between Russia and Saudia Arabia goes unresolved. As of Sunday, at least four states were under statewide “stay-at-home” or “shelter-in-place” orders, while leaders in major cities, including Philadelphia, Dallas, St. Louis, Kansas City and New Orleans, issued similar orders. Governors across the nation have ordered “nonessential” businesses closed.

Paris area prices for a gallon of regular gas this morning ranged from $1.67 to $2.07 as statewide prices fell another 10.4 cent per gallon in the past week. Texas’s statewide average is now $1.86 per gallon, according to gas price tracker GasBuddy. That’s down 30.3 cents per gallon from a month ago and 53.5 cents per gallon lower than a year ago.

“Gas prices have spent virtually all of March marching lower, with the drop continuing as the coronavirus destroys oil demand globally, leading to the lowest oil prices we’ve seen in 18 years, paving the way for still an additional 35- to 75-cent-per-gallon drop at most stations in the weeks ahead,” said Patrick DeHaan, head of petroleum analysis for GasBuddy. “I don’t think I’ve ever seen such a collapse in prices, even including the Great Recession. What we’re witnessing is easily going to go down as the great collapse in oil demand, and for motorists hurrying to fill up today, they’re wasting their money as prices will continue to drop in the days ahead.”

The national average this morning has fallen to $2.12 per gallon, according to travel club AAA, with 19 states reporting gas for under $2 per gallon. Prices continue to fall even as new data from the Energy Information Administration shows demand increased to 9.7 million barrels per day from 9.4 million last week and as the total domestic supply decreased by 6.2 million barrels to 240.8 million barrels.

“Crude prices increased (Thursday) after reports emerged that the U.S. is attempting to intervene in the crude price war between Russia and Saudi Arabia. According to reports, the Trump administration may threaten Russia with sanctions and is using diplomatic pressure on Saudi Arabia,” AAA reported. “Additionally, crude prices increased after the U.S. Department of Energy announced that it would request $3 billion from Congress to purchase crude oil for the Strategic Petroleum Reserve and the U.S. Treasury Department suggested that the federal government should purchase $20 billion in oil to prop up prices.”

Despite efforts to curb declining prices, DeHaan said there’s “plenty more room for prices to drop, putting 99 cents per gallon prices as a strong possibility for perhaps many more stations than we previously anticipated.”

“This is truly an unprecedented turn of events,” he said.

Oil and gas companies have begun reducing their operations in the Permian Basin. The Houston-based Apache Corporation recently announced it would pull all its oil and gas rigs out of the Permian to save on short-term spending, the Carlsbad Current-Argus reports.

Meanwhile, Pioneer Natural Resources, which operates mostly in the Delaware Basin on the western side of the Permian, and is one of the largest acreage holders in the region, also announced a significant cut in operations. The company’s rig count will be cut from 22 to 11 while completion crews will be reduced from six to two or three, the company said in a statement.

Robert McEntyre, a spokesperson for the New Mexico Oil and Gas Association, said the state’s industry was well-positioned to emerge from the financial crisis a leader in energy production. He pointed to New Mexico’s overall rig counts, reaching 116 rigs — a record — and growing to 117 in March, an increase over March 2019’s average of 105 rigs.

But until the virus is contained and the price war between Saudi Arabia and Russia is resolved, McEntyre said the industry faced uncertainty.

The Associated Press contributed to this report.

The 6th annual Walk of Hope is canceled this year, said Jane Adams, Lamar County District Attorney victim assistance coordinator. The event had been planned for April 22 in the Downtown Paris Plaza.