Starting at
$16.50 for 30 days
Get Started
View all rates
You are the owner of this article.
Edit Article Add New Article
You have permission to edit this article.
Edit
Home
News
Opinion
Be Heard
Sports
Classifieds
Obituaries
Customer Service
e-Edition
Paris Life
Reader's Choice
1 of 6 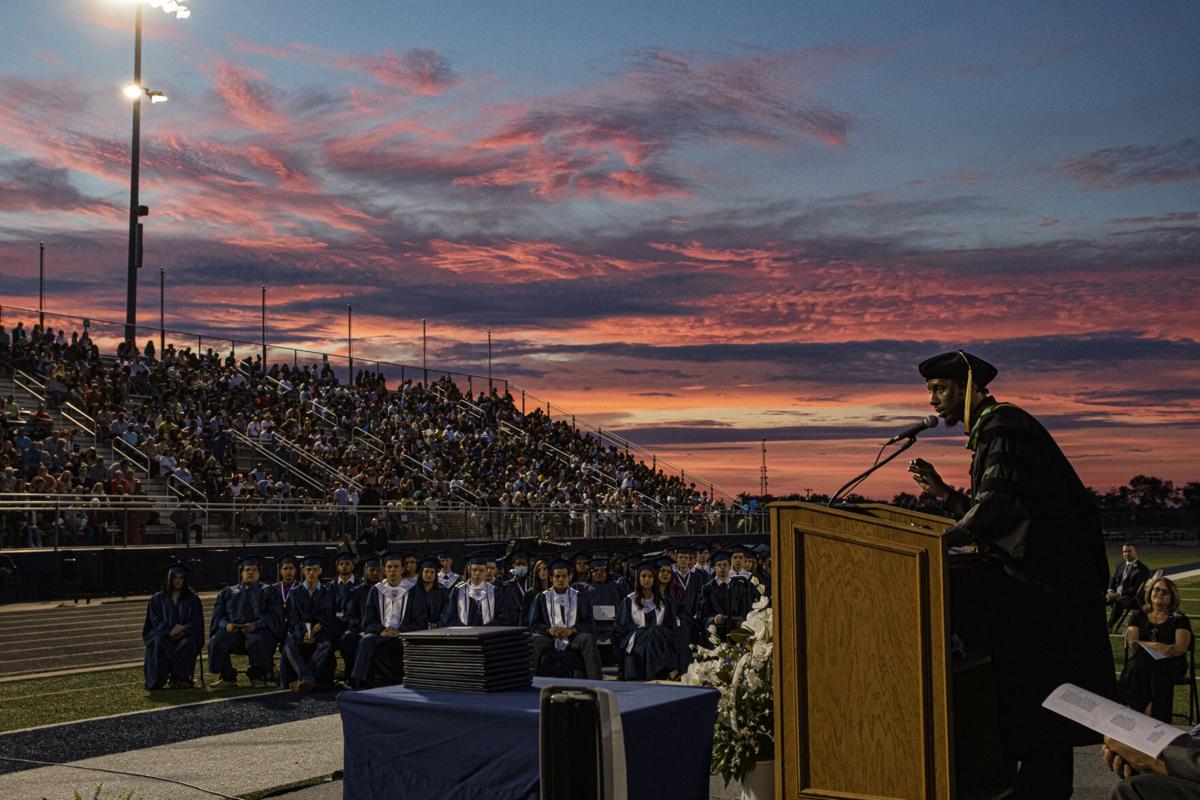 Paris High School’s Class of 2021 commencement speaker, Andrekus Dixon, who graduated from the school in 2000, encouraged the graduates to persevere and remain true to themselves as they venture out into the world. 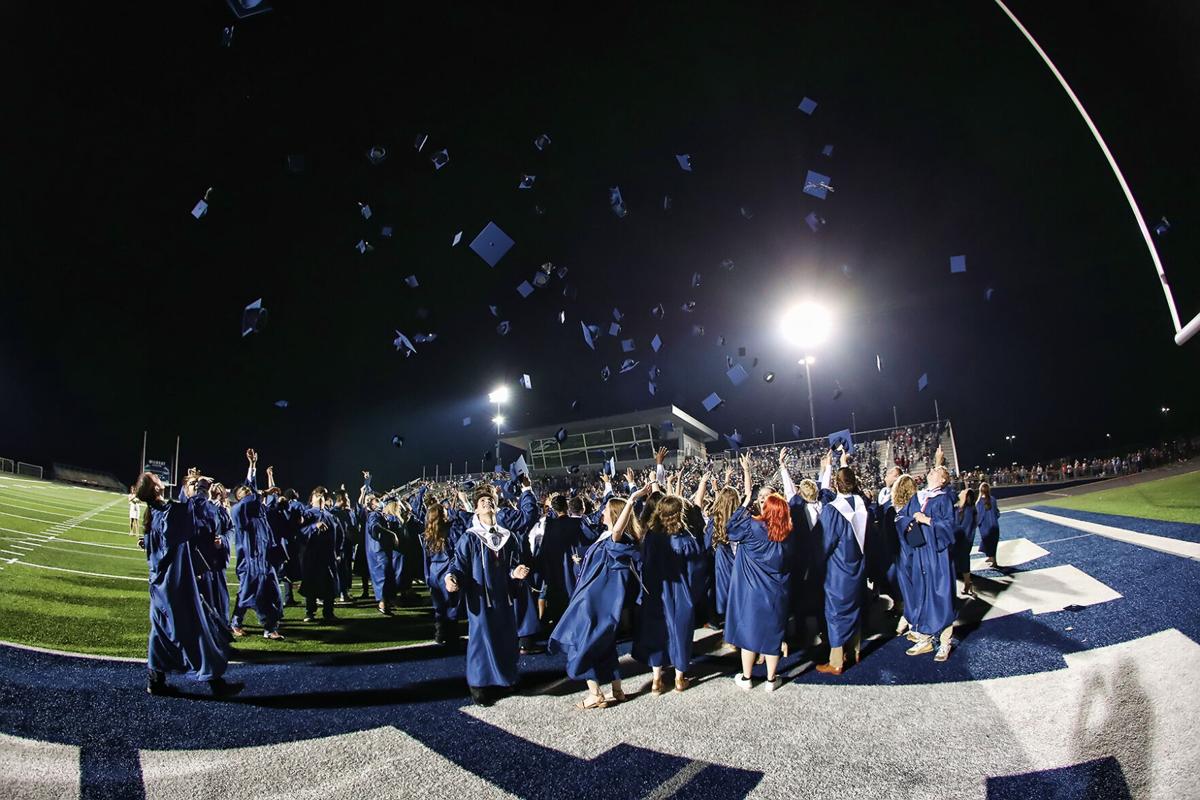 Paris High School’s Class of 2021 tosses their mortarboard hats into the air after their graduation ceremony Friday at Wildcat Stadium. 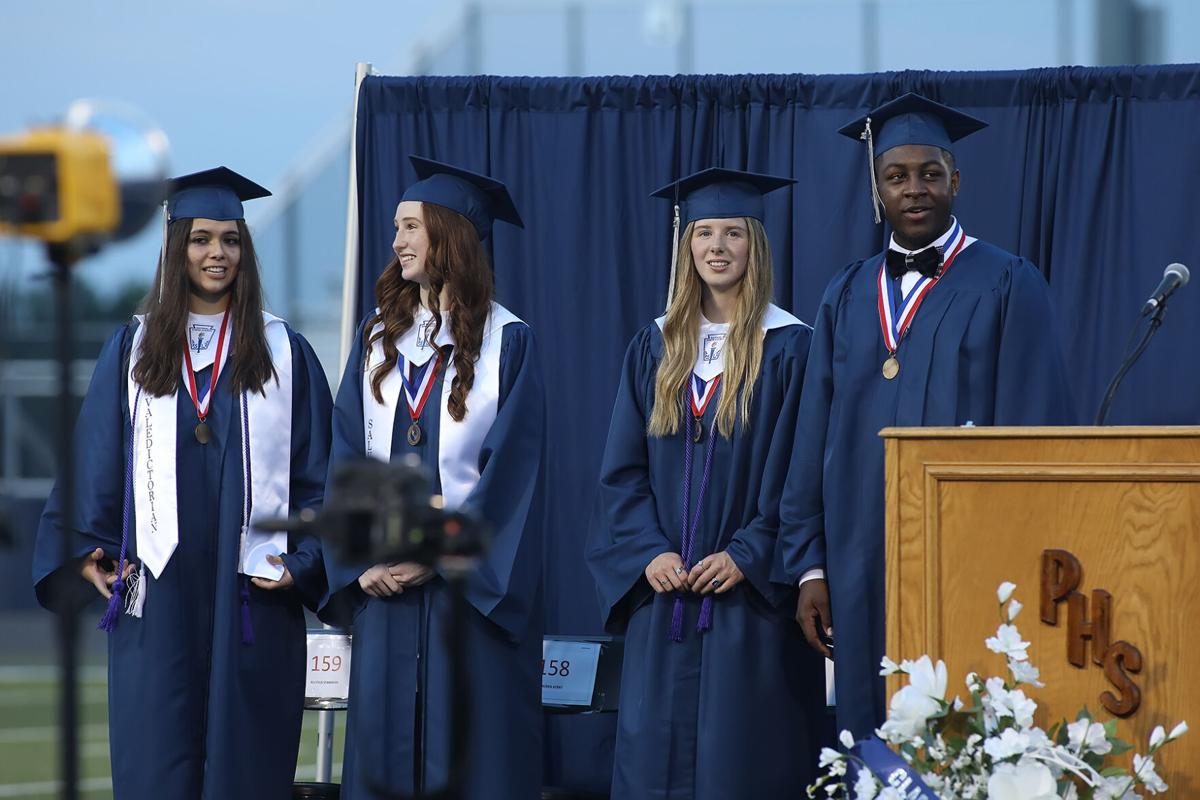 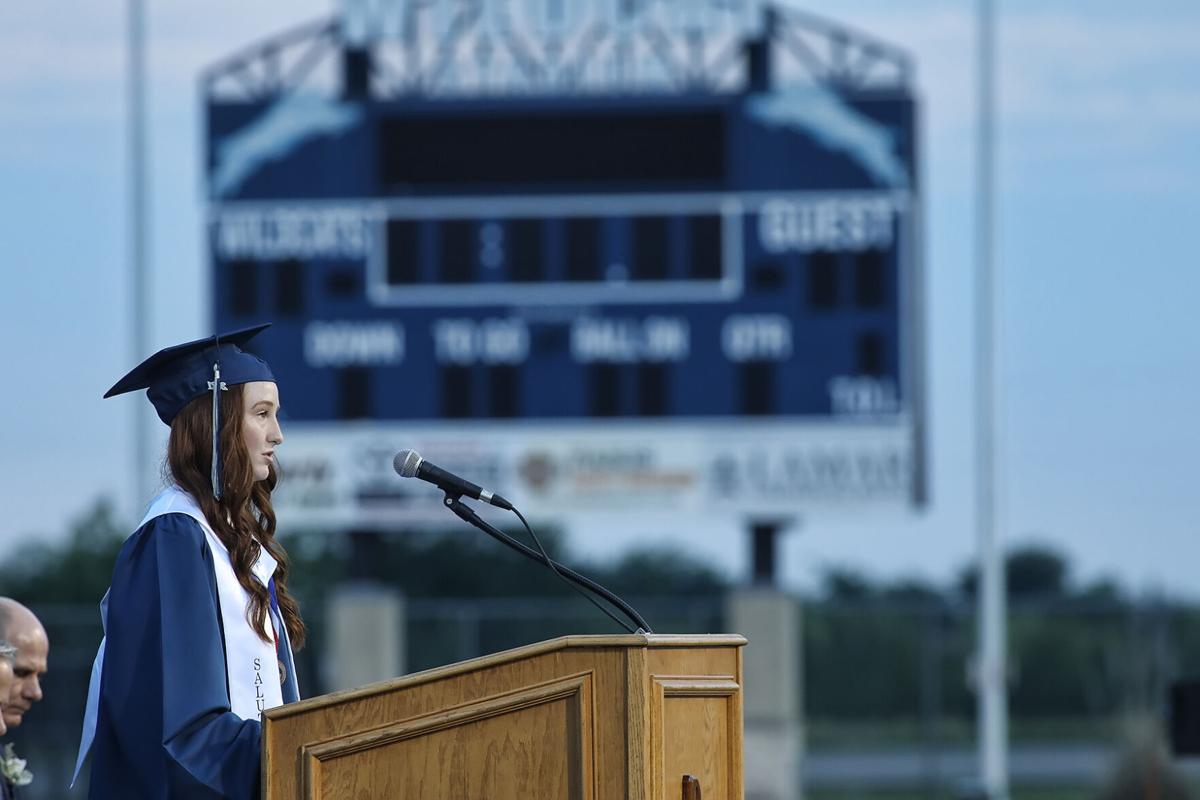 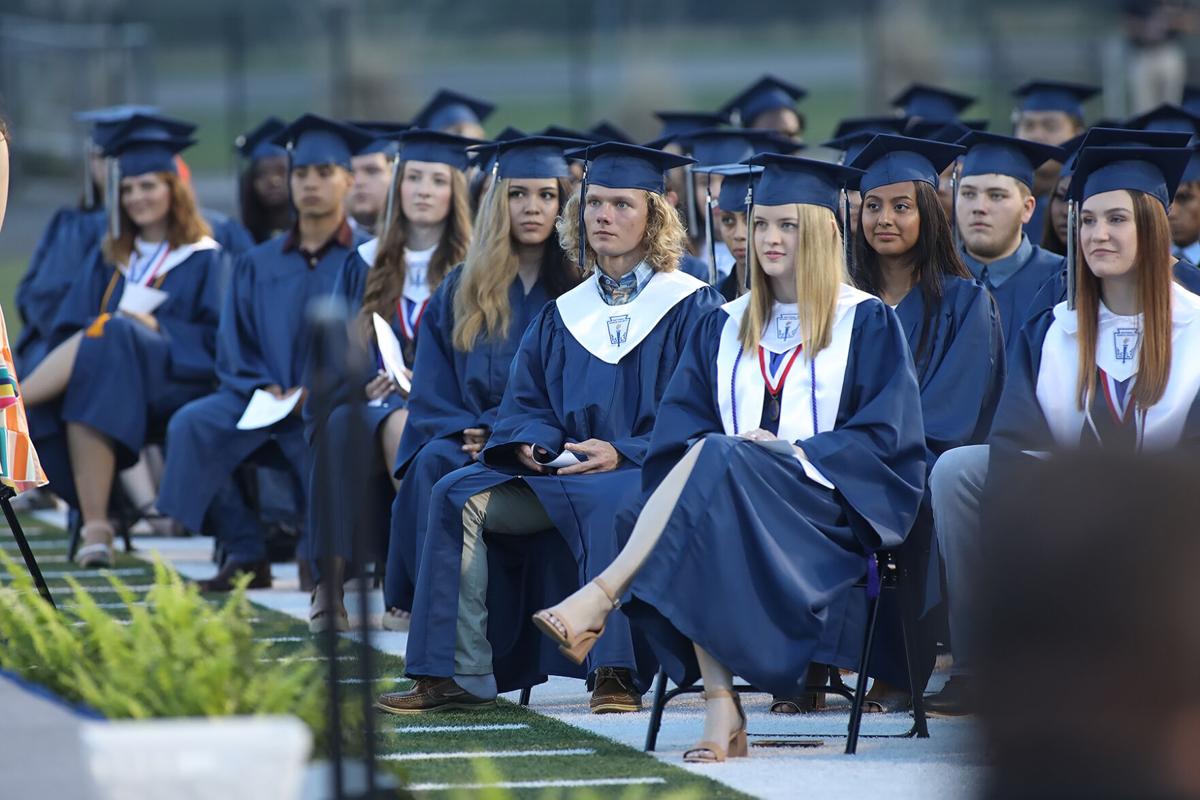 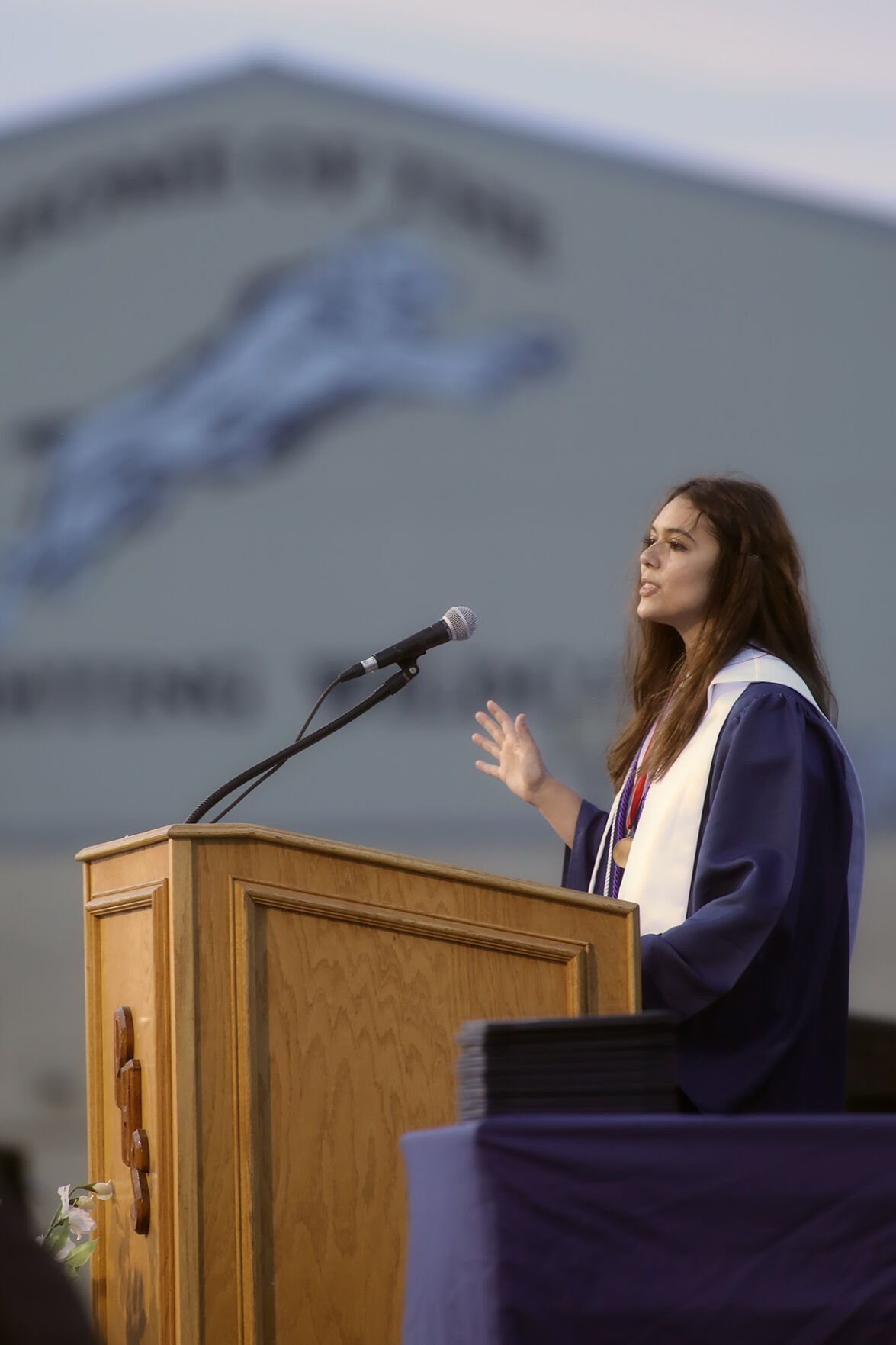 Paris High School’s Class of 2021 commencement speaker, Andrekus Dixon, who graduated from the school in 2000, encouraged the graduates to persevere and remain true to themselves as they venture out into the world.

Paris High School’s Class of 2021 tosses their mortarboard hats into the air after their graduation ceremony Friday at Wildcat Stadium.

Flanked by a cotton candy colored sky lit by the setting sun, Paris High School’s Class of 2021 prepared themselves for the final step in their high school career — receiving their diplomas.

One hundred and sixty nine students in cap and gown took to the field at Wildcat Stadium on Friday, where Superintendent Paul Jones accepted Principal Chris Vaughn’s certification of the Class of 2021 before a large, cheering crowd of friends and family members.

Class salutatorian Lauren Avery welcomed her fellow classmates, recognizing the occasion as the moment their hard work in school had paid off. Avery joined the Paris High School Class of 2021 as a freshman in high school, after moving to Paris, and she expressed her appreciation for sharing the high school experience with her classmates.

“We have gone through this experience together, lifting each other up, learning from each other, and ultimately creating a bond that nobody else could understand,” she said. “I think the Class of 2021 is an exemplary model of students who used this opportunity to its fullest in so many different areas. We each have a different experience in high school, and each and every one of us has faced hardships in some way. Yet this is what has allowed us to become who we are today, sitting proudly in our caps and gowns. I have personally seen this growth not only in myself, but in those around me.”

As class valedictorian, Allyssa Standifer took to the podium, injecting her final words to the Class of 2021 with humor. Times are crazy right now, she said, adding that although she’s heard things are getting better, she wasn’t going to say it because it seems whatever she says, the opposite happens. She learned her lesson on that when the Covid-19 pandemic began because she told herself that “things can’t get any worse than this,” she said.

“So that’s why I won’t be saying things are getting better. Now I know that’s not the most optimistic mindset, but that doesn’t mean that I’m just going to give up entirely. I’m making the best of the situation, and that’s what I think my biggest takeaway from high school is: In high school, many of us felt like we knew absolutely nothing that was going on at any time. But that’s gonna discourage us from moving forward and persevering through the obstacles. And look where that got us. Making it here tonight is amazing, and it’s especially amazing when you remember just how insane this past year was, and just how insane high school was as a whole,” Standifer said.

Perseverance also was a word of advice from commencement speaker Andrekus Dixon, a member of the Paris High School Class of 2000 who has gone on to become director of undergraduate programs for University of North Texas. Dixon spoke of the crossroads he encountered after his high school graduation, and how they were opportunities that demanded a course of action.

“When I was in graduate school, the first day, I’ll never forget it. I was sitting in class, and I’m looking around at everybody in the class with me. And I’m saying to myself, ‘I don’t think I belong here. I don’t think I’m smart enough. This kid went to SMU; this kid went to TCU; this kid went to OU,’ all these big schools. … And then we had a midterm paper that was due midway through the semester, and I turned it in. I got it back. And it was terrible. It had a lot of red on it,” Dixon said. “It was at that point to where I knew I was at a crossroads. I could either let grad school beat me, or I could beat grad school.

“And ultimately, what I did with that paper was I went to my professor during his office hours and said, ‘How can I get better? How can I be more of a proficient writer? What do I need to do to work on?’ And he relayed to me what I needed to do, and then I also went to the writing center so I could get help from the writing center. And there were weekends where my buddies would call and say, ‘Hey, man, can you come hang out?’ And I was like, ‘Nah, man, because I got this research paper I’m working on. I would love to hang out, but I can’t right now because I got priorities that I need to handle right now.’

He encouraged the class to follow their dreams, and not to let anyone tell them they can’t achieve something they want to achieve. Noting that his own graduation from Paris High School was 21 years ago, he encouraged the graduates to cherish moments like graduation because time flies by quickly.

“I want the Class of 2021 to promise me that you’ll do these three things: Number one, always be your true self. Always be you in any environment. Stay true to yourself. Number two, always be kind to others. Always. And lastly, number three, always strive for greatness,” Dixon said.

Before a packed gymnasium in Pattonville, 41 members of the Class of 2021 bid farewell to Prairiland High School during commencement exercises Friday night amidst tears, cheers and laughter.