Eddie McDade finished bagging pears for the Downtown Food Pantry on Wednesday, so those in need can ‘shop’ for groceries today. 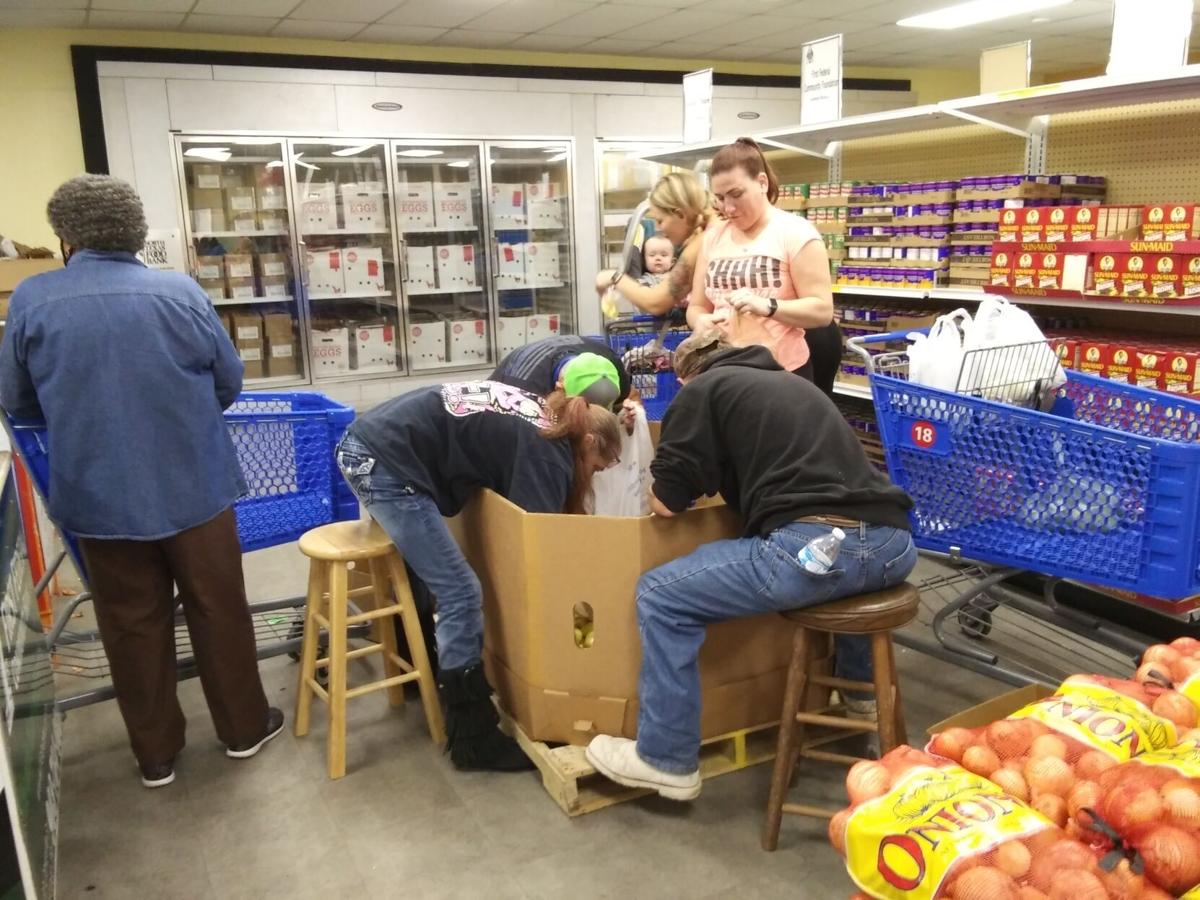 The members of the Lighthouse Mission Church work to bag fruit Wednesday at the Downtown Food Pantry. The pantry has kept up through the pandemic to allow for those in need to get help.

Eddie McDade finished bagging pears for the Downtown Food Pantry on Wednesday, so those in need can ‘shop’ for groceries today.

The members of the Lighthouse Mission Church work to bag fruit Wednesday at the Downtown Food Pantry. The pantry has kept up through the pandemic to allow for those in need to get help.

Volunteers clustered around a large box, rapidly bagging pears while spectators — who had finished their box of onions — heckled them.

“Do you see what I have to work with?” Theresa Huckabay said, laughing, gesturing to the other people bagging pears beside her.

Some members of Lighthouse Mission Church were helping the Downtown Food Pantry on Wednesday prepare for today’s “shopping” selection for those in need in Lamar County. This year, the pantry has served 25% of the residents in Lamar County, director Allan Hubbard said, and he hopes it has become a fixture in the area’s nonprofit landscape.

“That means 25% of the Lamar County population has been here at least two times,” he said. “We’re here, and you can trust that we will be here.”

The pantry opened 11 years ago, he said, and this year the board of directors decided to really get on board with the location on West Cherry Street, now that the local organization has matured in its place in Lamar County.

“We’re not going to leave,” Hubbard said. “We’re really going to try to invest in our location. Paris is blessed with a lot of institutions … that are faithful and reliable.”

That investment included upgrades to the facility, and the purchase of an adjacent lot for future projects.

“We had a new roof installed,” Hubbard said, adding the old one was probably the original roof of the building, and they added all new flooring and painted the building inside and out.

The new lot, north of the pantry, is empty, and could be used for any number of things, Hubbard said, from a new warehouse to parking for those who come for assistance.

John Kirkman started the pantry through the First United Methodist Church in 2009, and because many other churches were doing similar good works, was able to consolidate the work into one centralized organization. As the organization grows, it has become “a well-oiled machine,” Hubbard said.

“The bones of this place are solid,” he said “It’s a well-oiled machine. Twenty-five churches partner with us.”

This year, with all its twists and turns, that stability has been especially important.

“Our mindset this year is people don’t need any more uncertainty in life right now,” Hubbard said. “Familiarity is important in times of distress. … We didn’t add to the chaos.”

The pantry has put social distancing measures in place and requests everyone wear a mask, and most do. They haven’t had any problems with people following the new protocols.

“They understand the need for it in order to maintain a dignified and helpful experience,” Hubbard said.

The shelter has stuck with a grocery-style assistance model even during the pandemic, allowing people to “shop” for what they need, as opposed to doing up pre-made boxes to make it as low contact as possible. Hubbard said while they do some boxes for seniors for delivery, a lot of times boxes contribute to waste because the family might not be able to use all the food items available. For instance, if someone has a peanut allergy, the peanut butter wouldn’t really help them.

Volunteer numbers dropped a bit around April and May, making those who did come to help even more important, with those in the pantry having to double time it to make the shelves and incoming donation ready. The organization’s partnership with the North Texas Food Bank has been especially important because while shelves were becoming empty in Lamar County, the food bank was able to make sure the pantry had enough for everyone who came for assistance.

“If anything, we had more options to offer,” Hubbard said. “We had 15 different canned items to choose from just in the vegetable aisle.”

Also during the hardest part of the pandemic, the pantry was able to offer toilet paper. Normally it doesn’t stock home goods, Hubbard said, but through a connection with a local youth pastor, the pantry had stock of Cheyney Toilet Paper out of Royce City. And, since the pandemic hit, it has started offering milk.

“A lot of that was free from Borden,” Hubbard said, “And now we’re in a partnership with Oak Farms.”

Hubbard also wanted to note that Campbell’s Soup Co. “has been a phenomenal partner” through all of this, along with other corporate sponsors like Atmos Energy and several private donors. This year’s board includes Jose Beltran, Lori Benson, Jo Blackburn, Rachel brown, Rocky Dority, Barbara Eatherly, Linda Flippen, Ronnie Grooms, Jerrica Liggins, Don McCaskill, Steve Smith, Mike Viehe and Sherry Williams. In January, four of those members will be replaced with Erik Roddy, Nikki Burchinal, Beverly Johnson and Sharon Young. Hubbard credited the board with the success the pantry has seen.

The pantry has also hired an assistant to operations director Chuck Burton to help with the logistics of additional services. The pantry has three satellite pantries in Roxton, Blossom and Powderly that it helps support, and sends out senior food boxes once a month.

And, for the next year, the goal will simply to “keep on keeping on,” Hubbard said.

Right now, the pantry is in the middle of its annual stuffing drive, asking all to donate boxes of stuffing, generic or name-brand. Rivalries have sprung up in years past, Hubbard said, between car dealerships, school campuses, and even one year pitched Rotary Club members against Kiwanis Club members. But Hubbard hasn’t heard of anything like that so far. All he asks is that if you do donate, let the office know so they can put it in the warehouse.

“We really appreciate that, and we’re here from 9 to noon, Monday through Friday,” Hubbard said. “But don’t just leave it by the front door.”

The Downtown Food Pantry has launched its annual Stuffing Drive and hopes to collect enough donated boxes to make sure families enjoy a nice Thanksgiving meal.