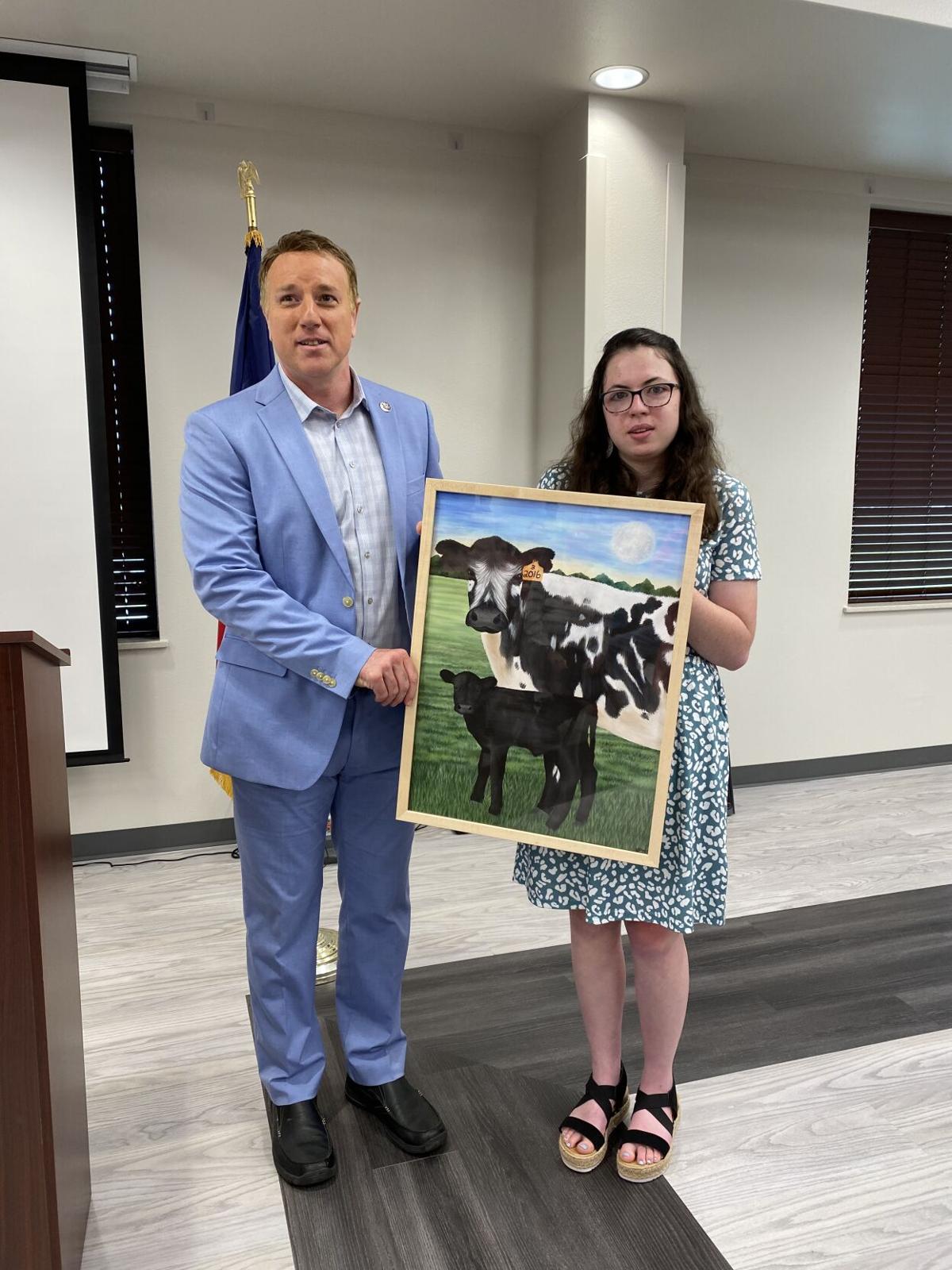 U.S. Rep. Pat Fallon poses for a photo with Kristen Parson and her painting. Parson was selected as the winner of Texas’ 4th Congressional District for the 2021 Artistic Discovery Competition. 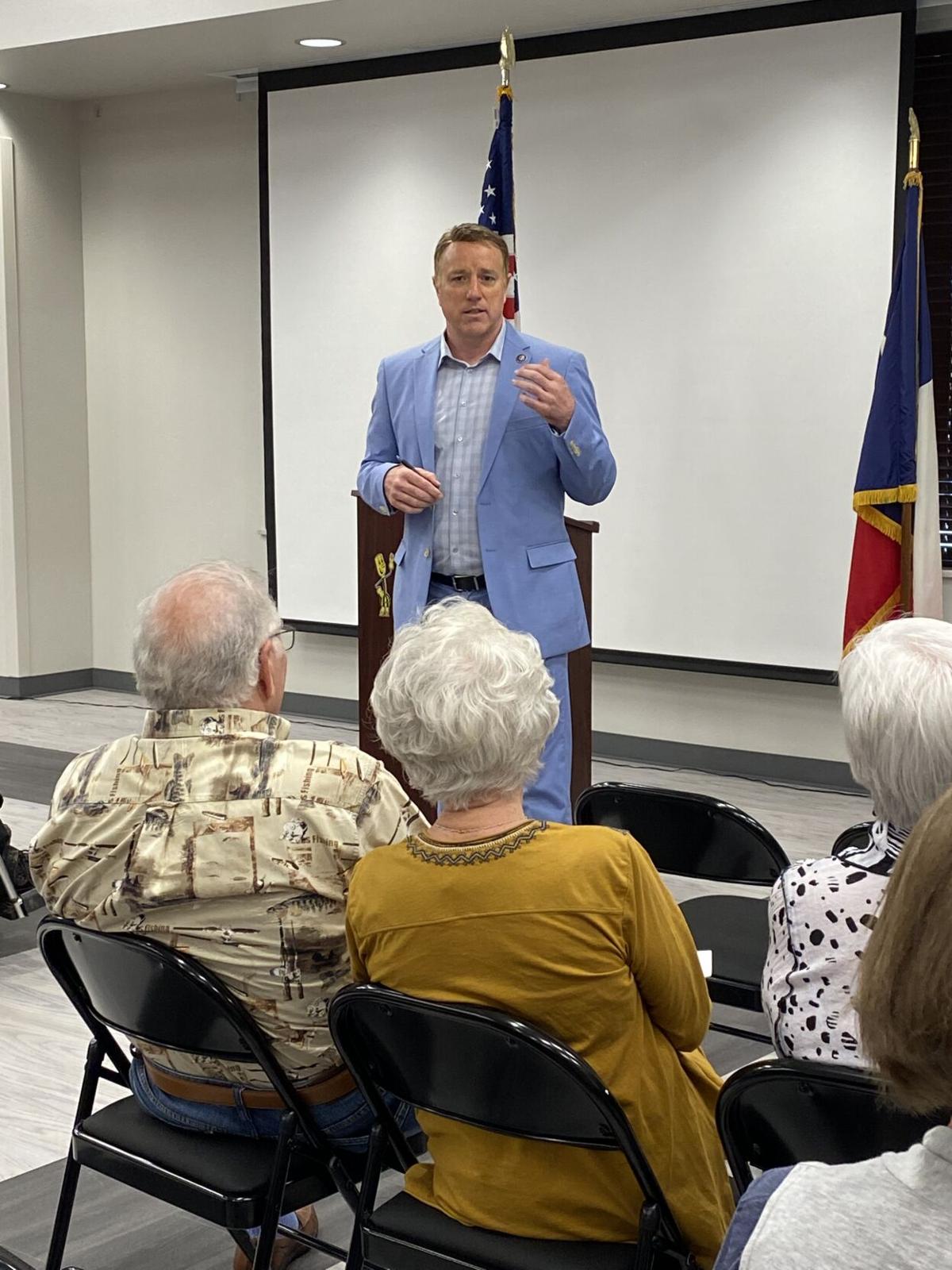 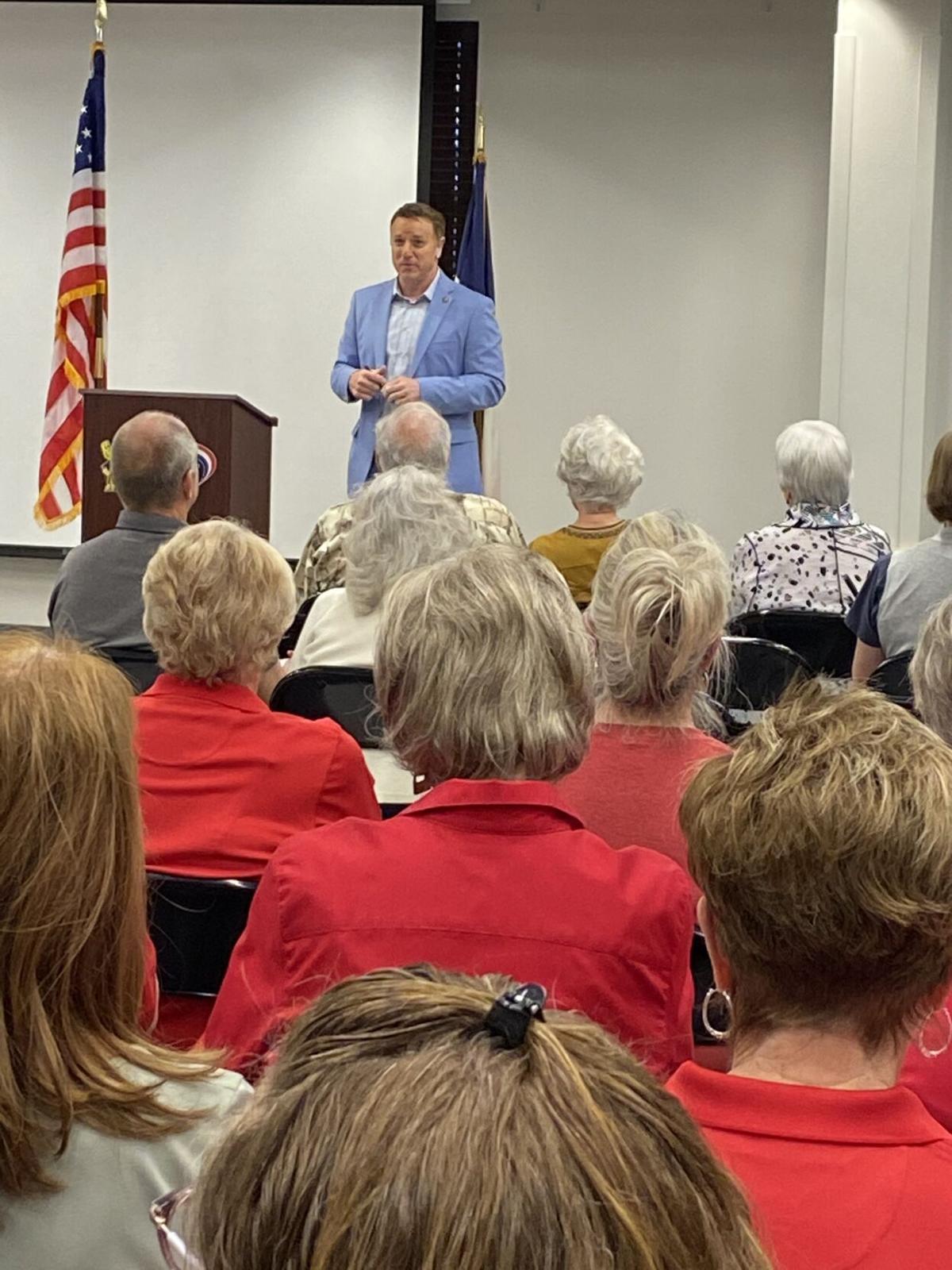 U.S. Rep. Pat Fallon poses for a photo with Kristen Parson and her painting. Parson was selected as the winner of Texas’ 4th Congressional District for the 2021 Artistic Discovery Competition.

BLOSSOM — U.S. Congressman Pat Fallon, R-Sherman, addressed hot national topics along with his lack of presence in the media before more than 100 people in the community room at the new Lamar County Electric Coop facility last week.

“Well, I haven’t been asked yet,” Fallon responded to the question before introducing Ball. “You know Matt Gaetz, Florida congressman, we’ll see how that plays out, one way or another. But his communications director was amazing because you saw Matt Gaetz on television all the time talking to us almost every night. Well, Luke Ball left Matt Gaetz, and he now works for our district.”

Fallon said he is ready to take all comers.

“I am not afraid of CNN or MSNBC or the networks. They just haven’t asked because, quite frankly, they don’t want articulated conservatives on their shows they can’t embarrass. I’m not going to do their work for them, and I’m not going to step in. There are some of our team members who do that. They give them something to talk about,” Fallon said.

Recalling his reason for running for office, Fallon said, “One of the reasons why I ran for this position is because I want to fight the message and the ways that culture works, and take it to them.”

During the town hall, Fallon talked about election integrity, Covid-19 relief funding, Washington D.C. statehood, immigration and the southern border, among other topics.

About election integrity, Fallon said he favors voter identification requirements, in-person voting from 7 a.m. to 7 p.m. on election day with limited absentee balloting, restricted early voting and election results the night of the election, or shortly thereafter. He applauded the Texas Legislature for its attempt to pass an election integrity bill, which failed when Democrats walked out, and said if a measure doesn’t pass during a special session, “we all need to raise a ruckus.”

Fallon talked about inequities in Covid-19 relief funding, excessive spending and the lack of bipartisanship.

“Of the $1.9 trillion, much had nothing to do with Covid relief,” Fallon said, adding the $350 billion to bail out failed cities and states went unproportionally to Democratic strongholds as he noted that Democratic Orleans Parish in Louisiana received three times more money than Republican Jefferson Parish.

Of $3 trillion allocated in the first round of funding, Fallon said $1 trillion had not been spent when Democrats approved another $1.9 trillion.

“It was a very bad piece of legislation, which should not have been a partisan issue,” Fallon said, noting that of 245 Republican amendments, 243 were rejected.”

“They have the audacity to argue that they don’t know if the district will elect a Democrat,” Fallon said. “President Trump lost by 92% to 5%. Fortunately, because of the filibuster, the bill is stuck in the Senate.”

About immigration, Fallon noted that 2.6 million illegal immigrants will cross the border this year alone while 3.8 million wait in their home country to come to this country legally.

“When they get here, they probably have a skill set that allows them to have the American dream, enjoying prosperity and contributing to their communities,” Fallon said. “And 95% of them are people of color, so this is never about race as Democrats claim.”

About the southern border, Fallon said the Mexican cartel, powerful, well-funded and immoral, controls the border, and as long as Democrats are in power the situation will not change.

“That’s why people in the valley are trending Republican,” Fallon said, noting that then President Trump lost the valley in 2016 by 34% and by only 15% in 2020. “They have had it with the corruption, the crime and the danger. They want that border secure, and they know the Democrats are not going to do it.”

When asked if he thinks the National Guard should be called in to secure the border, he first said he is not going to participate in in-party bickering, and said he believes Gov. Greg Abbott is doing a good job. He then added if he were governor, he would secure the border by whatever means it takes, even at the risk of litigation and time in jail. On the more practical side, however, he said Texas should use current laws to arrest illegals.

“We need to be more creative in securing the border,” Fallon said. “We have to demand it at the federal level, which we’re not getting now. I think this is a winning issue politically, and I think (the Democrats) will lose power. But, it’s going to be a tough 18 more months.”

Freshman Republican Congressman Pat Fallon today condemned the entirety of the Texas Democratic Party "for refusing to denounce racism," according to a press release from Fallon's office.