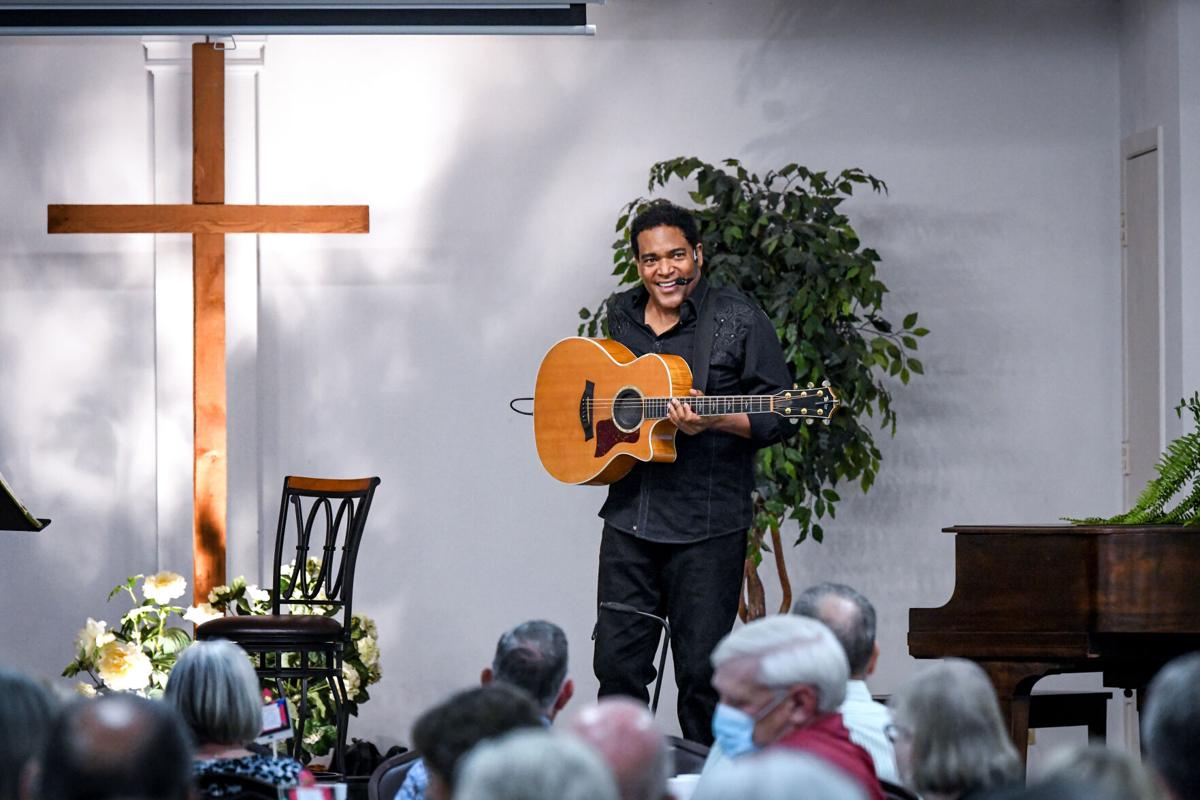 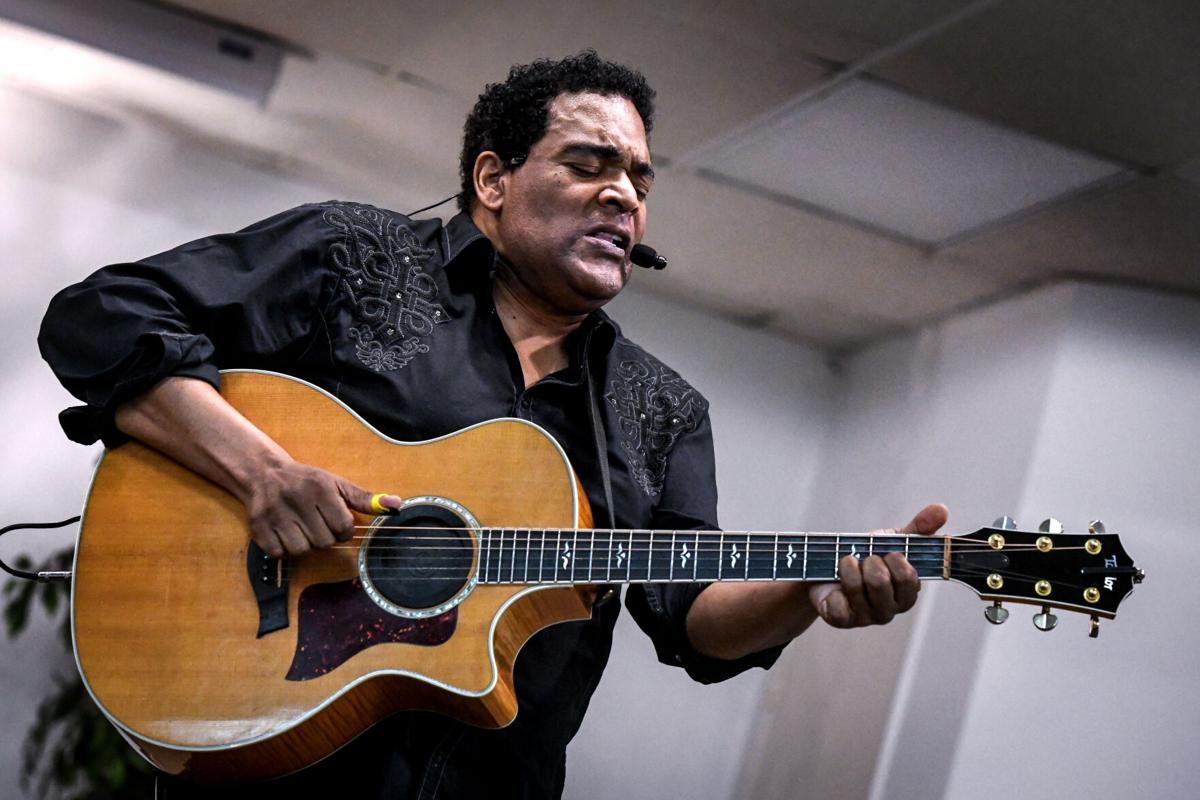 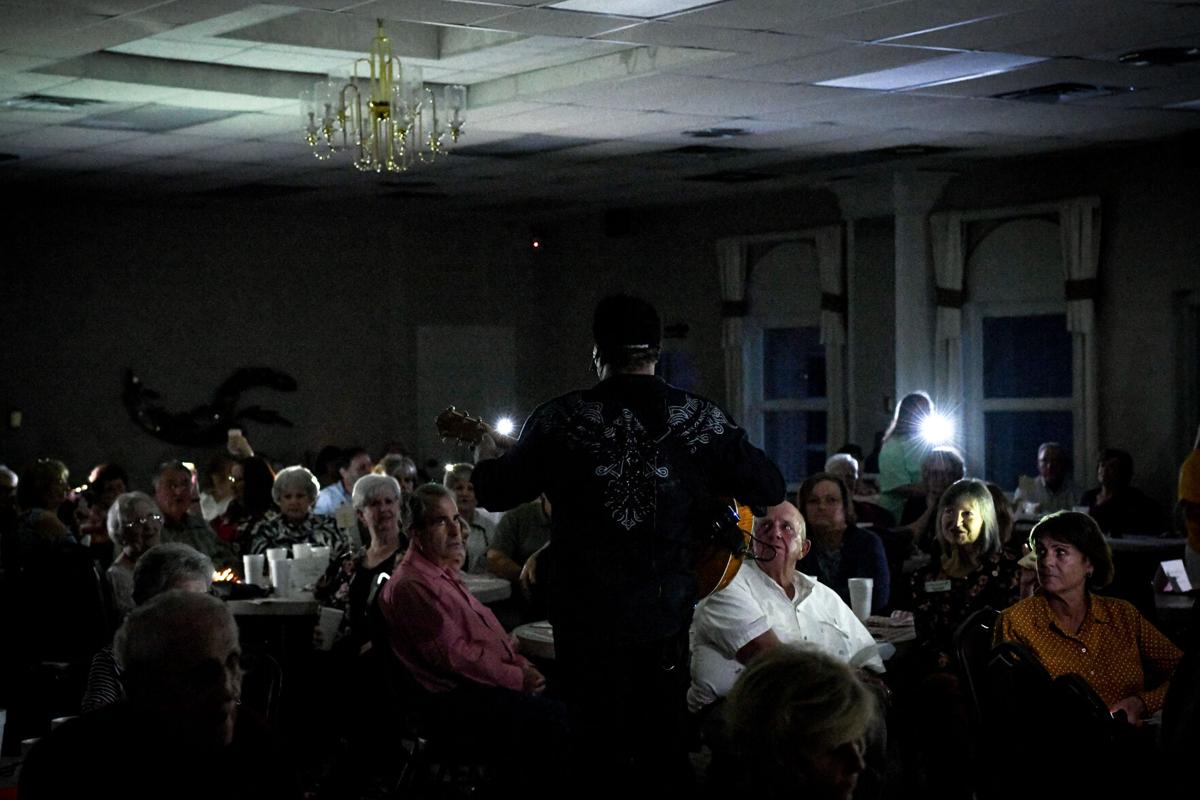 When the lights went out during Dion Pride’s performance at the First Christian Church’s Country Music Dinner Theater charity event Monday in Paris, he continued with his song with help from cellphone lights.

When the lights went out during Dion Pride’s performance at the First Christian Church’s Country Music Dinner Theater charity event Monday in Paris, he continued with his song with help from cellphone lights.

When the lights went out during one of his many high energy breaks on electric guitar, Pride didn’t miss a beat as he stepped from the stage and walked out into the audience where cellphones illuminated his path.

With power restored a few minutes later, Pride returned to the stage to continue a performance filled with renditions from his father’s more than 29 number one country hits along with personal stories about his life as the son of the Country Music Hall of Fame artist Charlie Pride.

The artist talked about how meticulous his father was and told about the time he took his father the lyrics to one of the pop hits he listened to as a youngster, to which his father replied no printed lyrics were needed for his songs.

“He said if you could not understand every word, the song might as well be an instrumental,” the son said.

The artist confirmed his admiration for his father, his love for the music business and how much his father wanted him to be just like him as he told about a conversation with one of his father’s closest friends, Waylon Jennings.

“My father wanted a clone and he almost got it,” Pride said, later explaining he thinks of himself as an extension of his father when an admirer was heard telling the performer he was much better in many ways than his father. “Waylon knew my father wanted me to be like him, and loved to rip my Dad, but Waylon always told me to be myself.”

After the singer’s more than an hour performance, compliments about his abilities could be heard throughout the sold-out audience.

“This is the best show ever,” Jo Nell Eads said. “It was so much fun listening to him. He is just unbelievable.”

“He’s Charlie made over,” Alan Weatherford said, adding Charlie couldn’t play the guitar like his son. “This was just remarkable, and I am looking forward to hearing him again next year.

Weatherford added that Pride’s music comes from the heart.

“It comes from right here,” the former county commissioner said as he placed a hand over his heart. “You can tell how much he loves what he does.”

Event coordinator Ronnie Nutt confirmed that Pride would return for a third time next year.

“I am excited to be coming back to Paris,” singer Dion Pride said about a sold out performance Monday night at the Country Dinner Theater at First Christian Church.