Starting at
$16.50 for 30 days
Get Started
View all rates
You are the owner of this article.
Edit Article Add New Article
You have permission to edit this article.
Edit
Home
News
Opinion
Be Heard
Sports
Classifieds
Obituaries
Customer Service
e-Edition
Paris Life
Reader's Choice
1 of 7 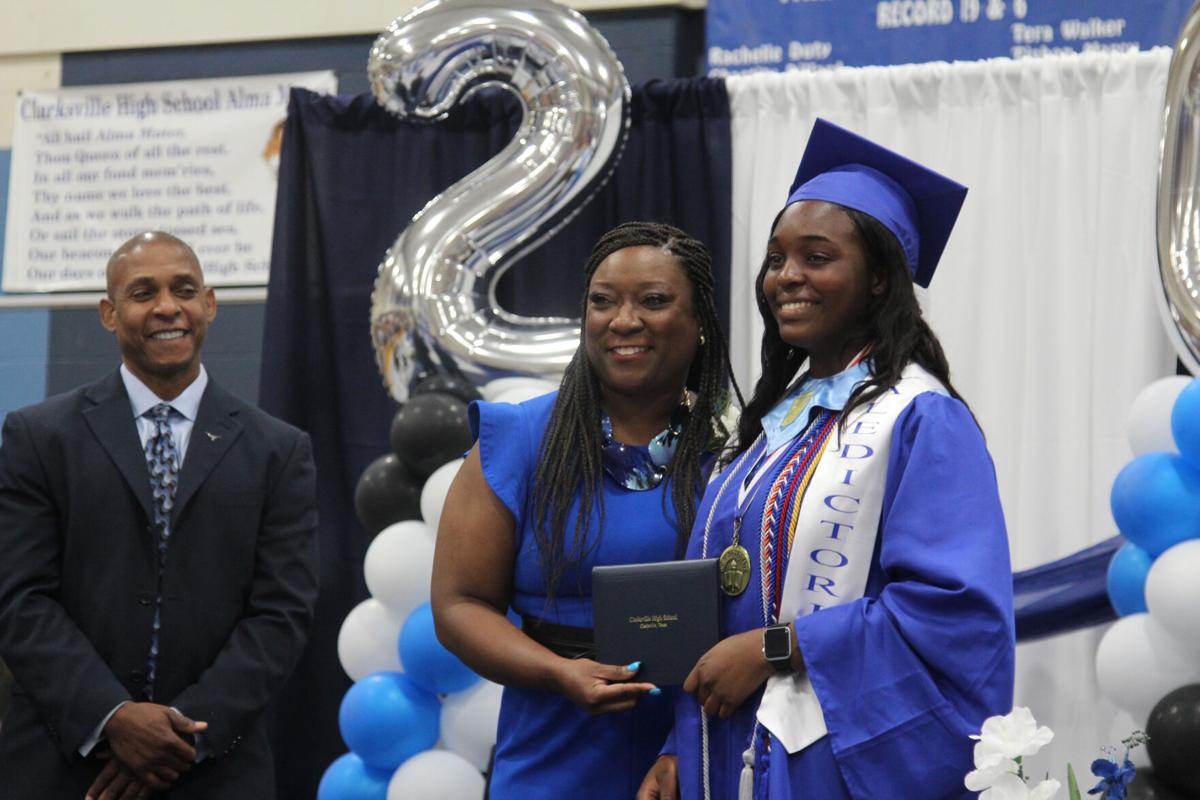 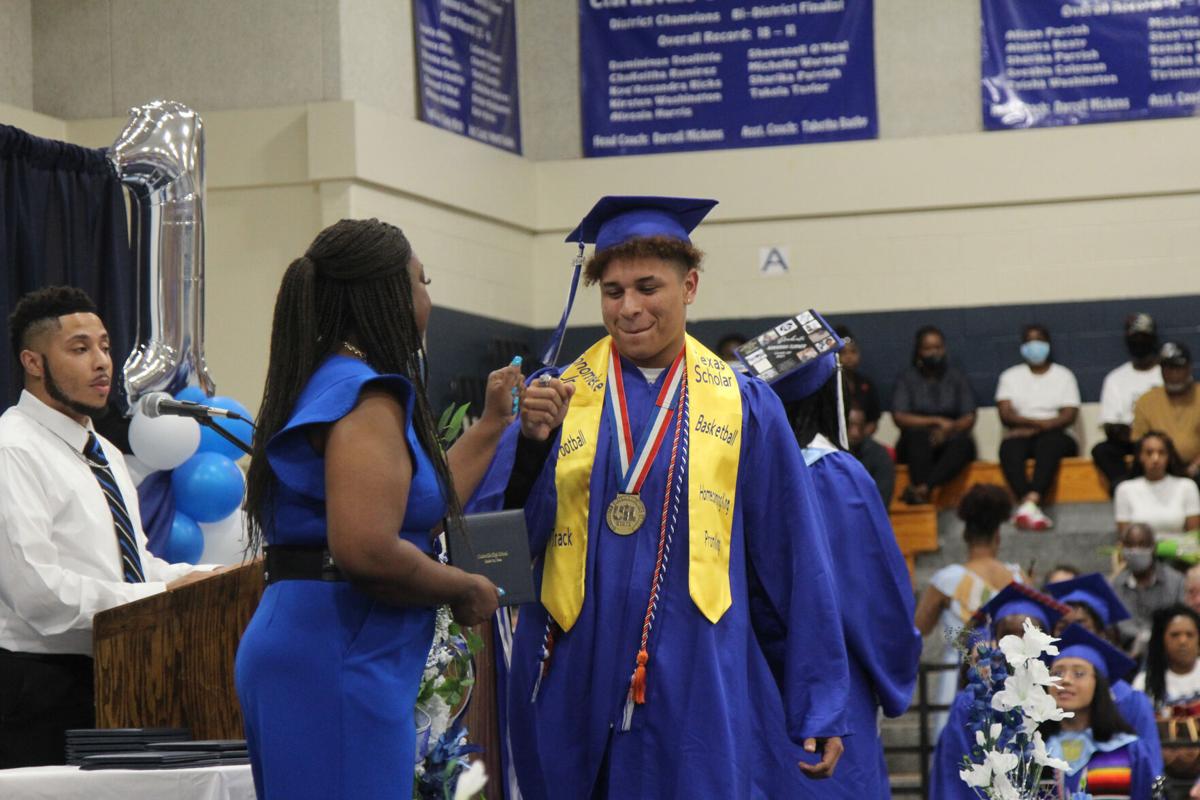 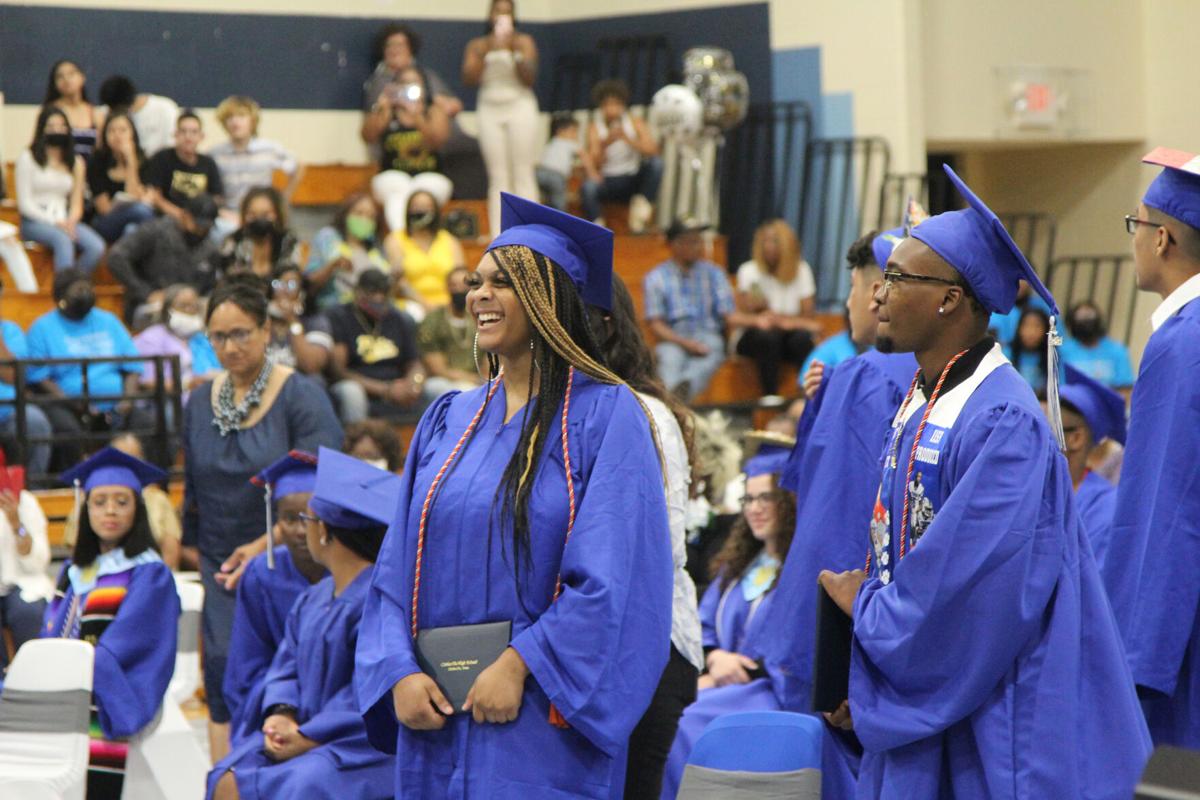 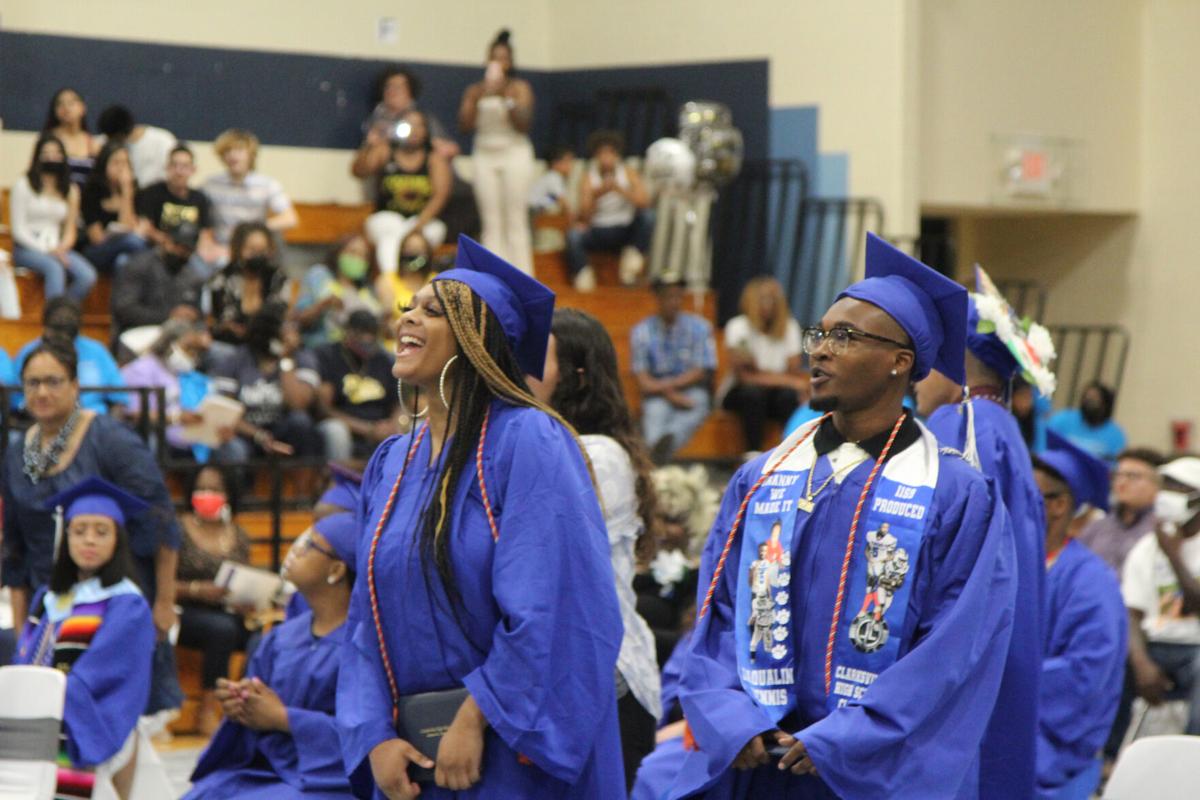 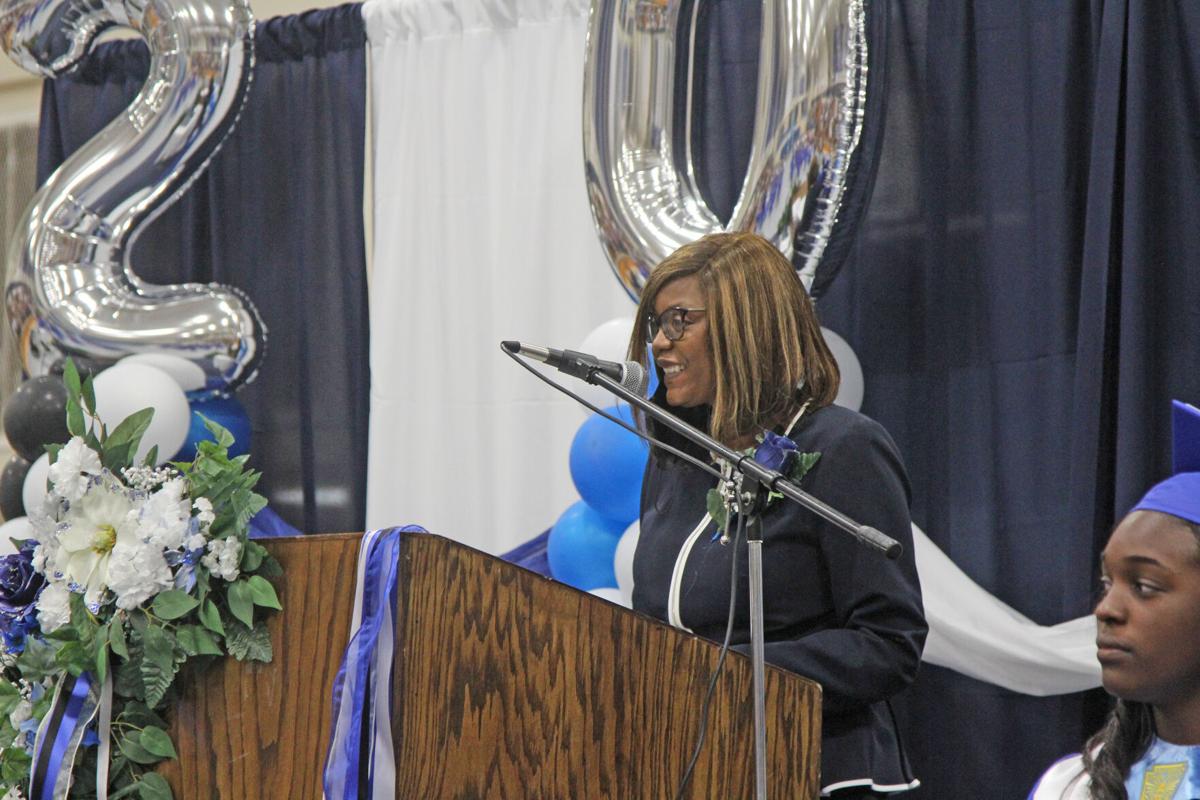 Commencement speaker Trina Garnes — and former Clarksville ISD student and teacher — told the class about her struggle to go from teenage mother on welfare to her master’s degree and special services director for a charter school in Dallas. 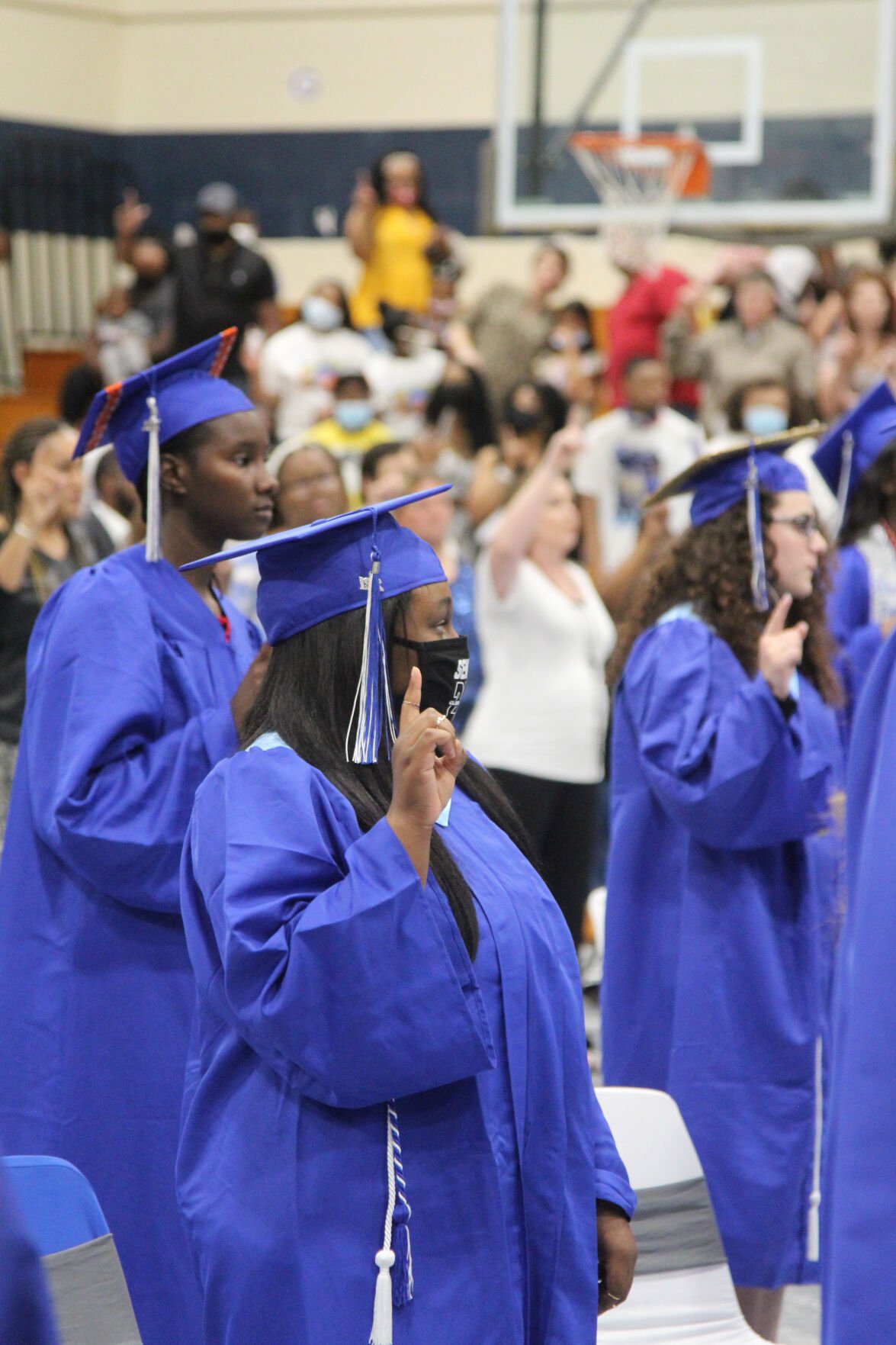 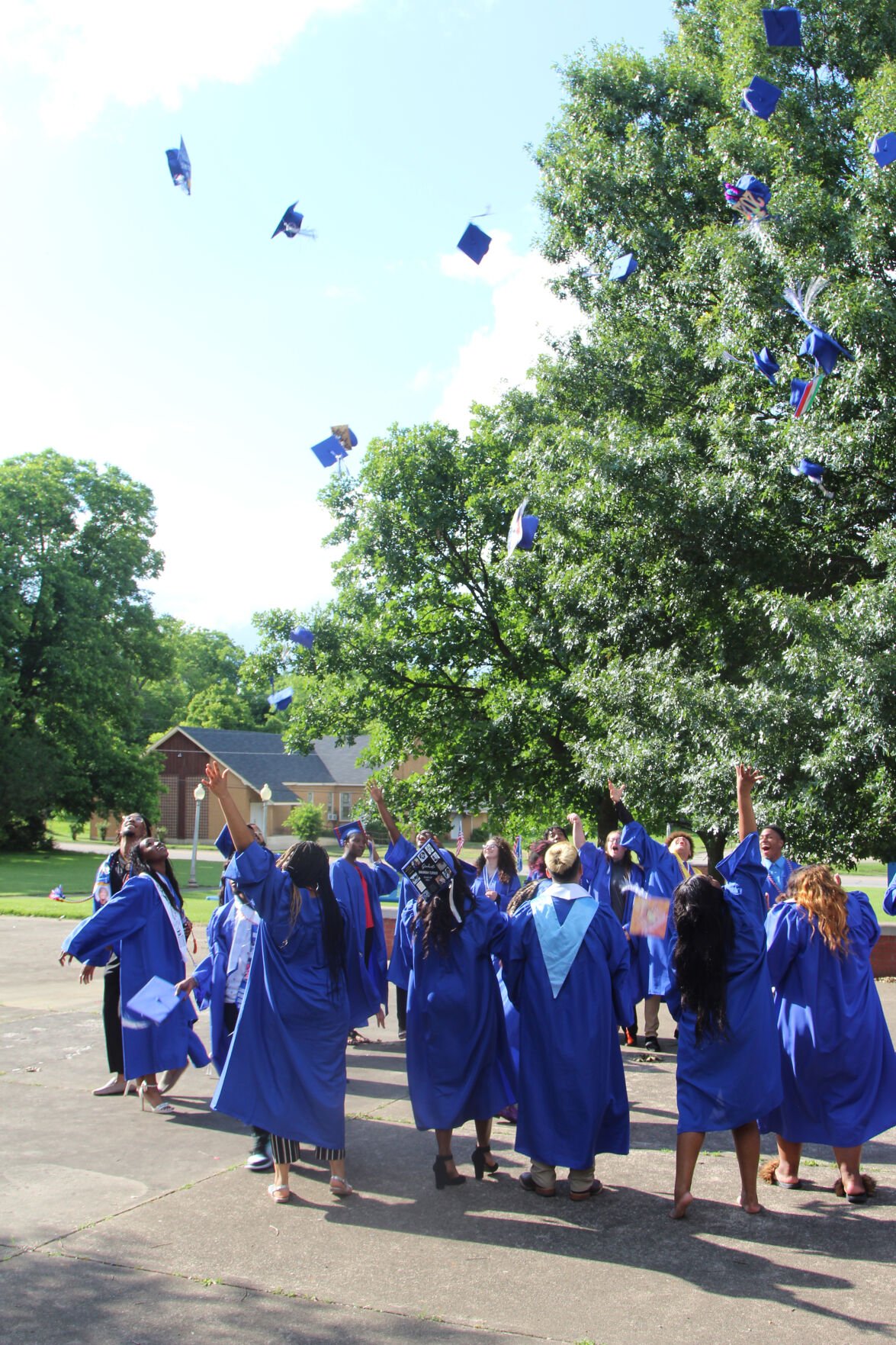 The Clarksville High School graduating class of 2021 throws their caps in the air.

Commencement speaker Trina Garnes — and former Clarksville ISD student and teacher — told the class about her struggle to go from teenage mother on welfare to her master’s degree and special services director for a charter school in Dallas.

The Clarksville High School graduating class of 2021 throws their caps in the air.

CLARKSVILLE — To cheer them on and inspire them for future greatness, Trina Garnes spoke at the Clarksville High School 2021 graduation ceremony.

“Be respectful and stay humble,” she said. “That’s going to take you so far.”

The Class of 2021 was her first ever after getting her degree, teaching them in pre-kindergarten, she said, and it was her last class before she moved to special education, teaching them fifth grade math. Garnes shared her story of how she went from high school dropout and teen mom in Clarksville to achieving her master’s degree and being a leader of special services at a charter school in Dallas.

“I was pregnant, I was on welfare and I couldn’t drive,” Garnes said. “I was determined I was going to make it. I wanted my kids to see what success looks like.”

With two kids, she attended classes at Paris Junior College and then Texas A&M-Commerce, she said, often bringing the children along with her. After being unable to find a job as a probation officer, she found a position as a teacher assistant at Clarksville.

“This is an example of God putting you where you need to be,” she said. “There was this kid, Manuel, I will never forget him as long as I live. I was helping him, and his teacher said, ‘Ms. Garner, you don’t have to help him, he will never get it.’ At that moment, something went over me. I saw my own son, who was in the third grade, who had dyslexia and was struggling. I saw him and I said, ‘that could have been my son.’”

The next day she applied for an education certification program and “never looked back,” she said, eventually getting so many certifications she was only three classes away from her master’s degree. Right now she is working on her Ph.D. in developmental psychology, she said.

The Class of 2021 graduated with half of the class as Texas Scholars, over 300 college credit hours and half a million in college scholarships, Principal Roshea Phillips said. While this year has been a challenge, students have risen to the occasion, she said, mastering a host of digital platforms for online learning and still, despite the hardships, “finishing strong.”

“Today is the culmination of many years of hard work, dedication, sweat and tears. This year was probably not the senior year you envisioned, but in spite of it all, you rose to the occasion and finished strong,” Phillips said. “Your accomplishments are many. … Class of 2021, you are on your way, which means you will encounter many obstacles along the way.

“The biggest obstacle will be yourself, so avoid self hate, self doubt, low self esteem, selfishness, negative self talk, full of self — yes, that’s a thing — and self-centeredness. Things to embrace: self love, self confidence, selflessness, self assurance, self care, self control and self discipline.”

Salutatorian Ricardo Trujillo said he looks forward to the next chapter in his and his classmates’ lives.

“Honestly, we will probably just learn how to live on ramen,” he said. “Our mistakes will become as important as our successes, because they will define us.”

Valedictorian Nakariah Turner said part of her time spent during the pandemic was watching “Hamilton” on repeat every day, she said, and she used songs from the hit Broadway musical to guide her speech. As in “My Shot,” she encouraged her classmates to always take chances, and as in “What Comes Next,” she added she knew her fellow students had worked hard to get to the next step and would continue to do so.

“Today, we are not saying goodbye,” Turner said. “We are saying hello to becoming citizens in an ever changing global society. … On this journey remember the will of God will not take you where the grace of God cannot sustain you.”

Before a packed gymnasium and an overflow crowd in the auditorium, 167 North Lamar High School graduates completed a chapter in their lives and moved on to new challenges Saturday night amid a sea of blue and gold.