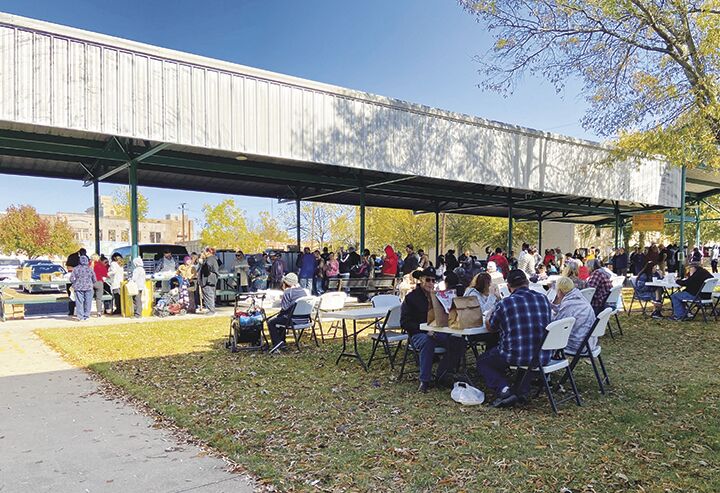 Christians in Action has hosted a Thanksgiving meal in Paris for those who want to join in the feast for 34 years. The latest gathering was Tuesday at the Farmers’ Market in downtown Paris where diners could eat on the grounds or get plates to go. 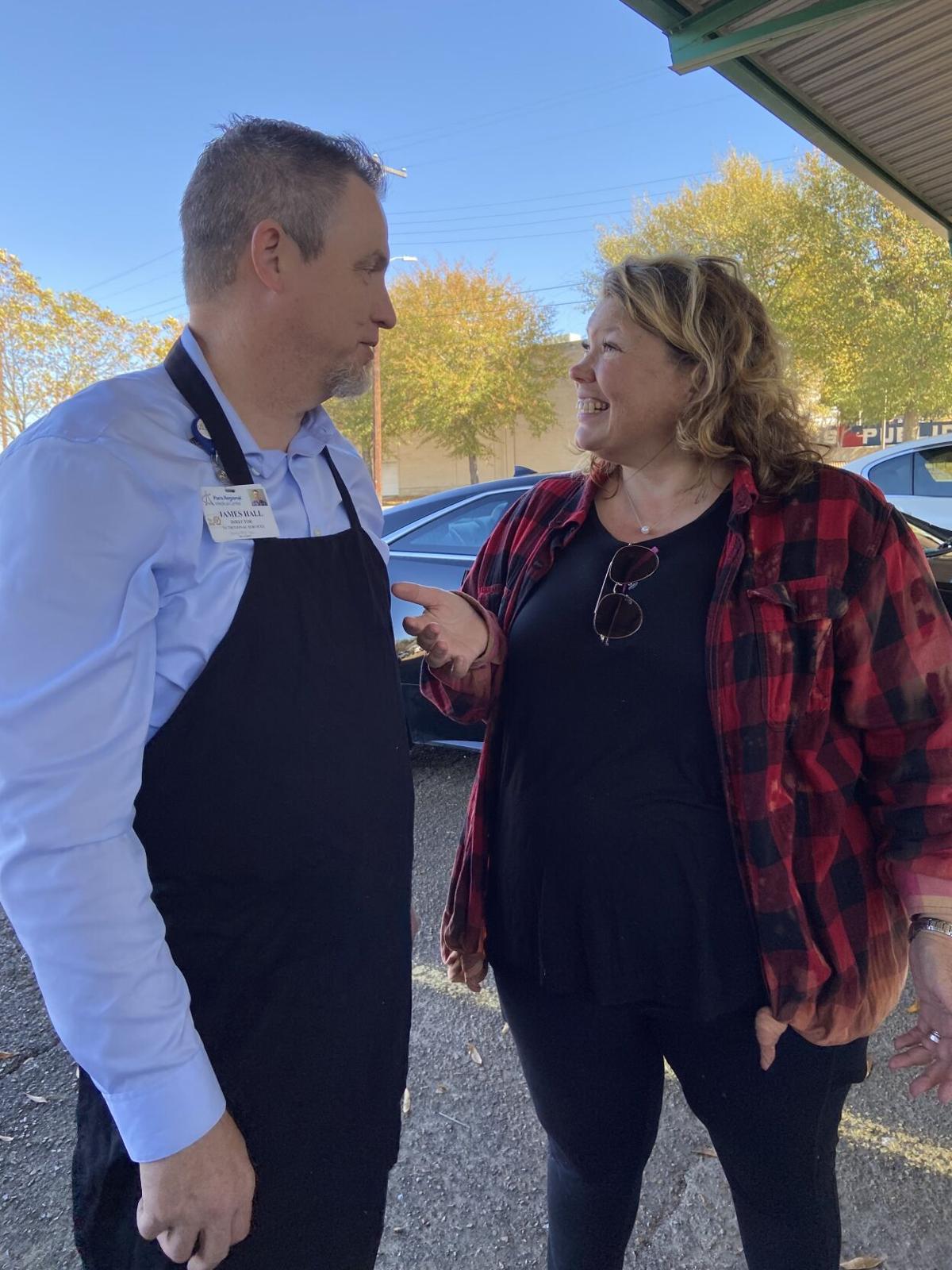 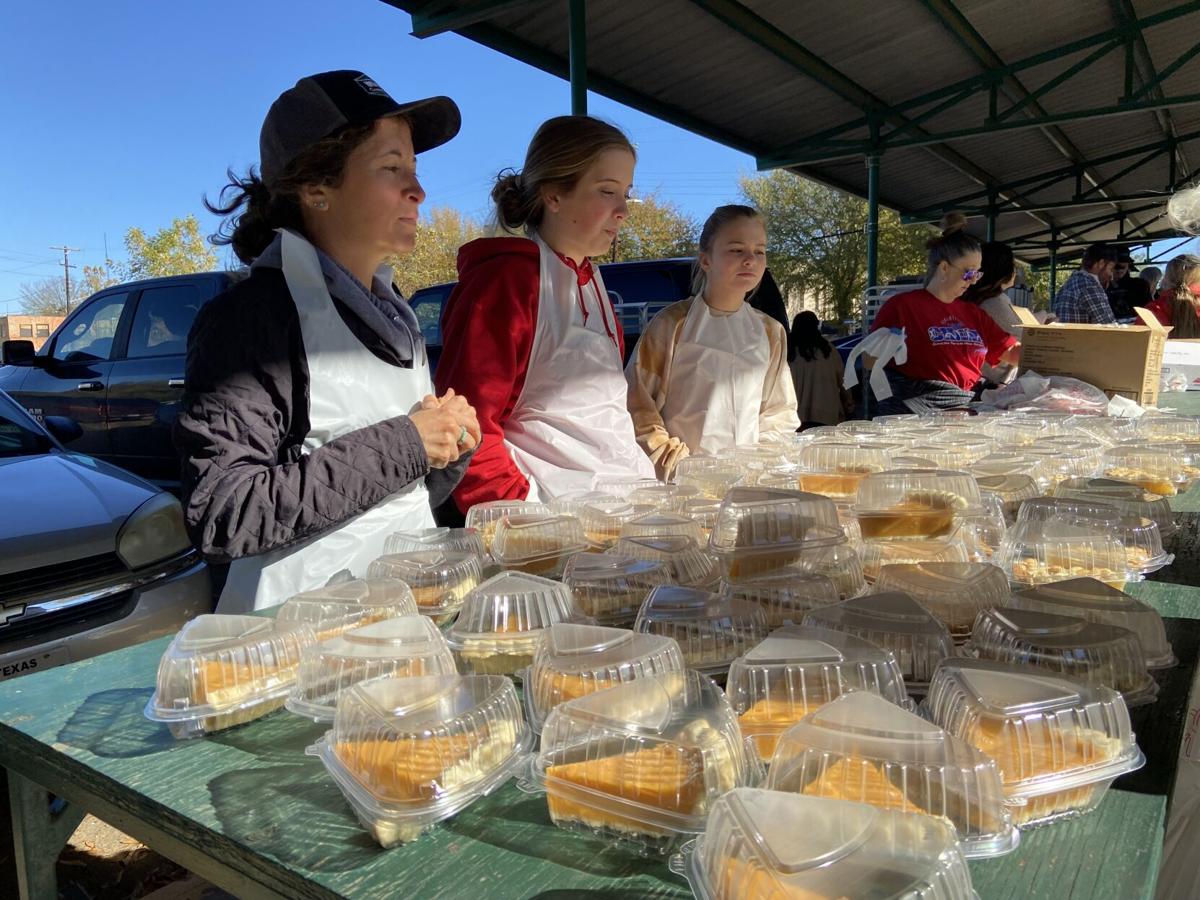 Christians in Action has hosted a Thanksgiving meal in Paris for those who want to join in the feast for 34 years. The latest gathering was Tuesday at the Farmers’ Market in downtown Paris where diners could eat on the grounds or get plates to go.

Under a cloudless sky on a crisp November day, several hundred people enjoyed a traditional Thanksgiving meal Tuesday at Farmers Market as Christians In Action joined with Paris Regional Medical Center to serve the less fortunate, a tradition in Paris for more than 30 years.

“There’s a full meal ready to eat, a full meal to fix for Thanksgiving Day and things to stay warm,” organizer Melissa Wickersham said about the day’s offerings as volunteers served food to a line of folks who first picked up socks, gloves, hats, scarves and blankets at a warming table and then proceeded through the serving line.

“Don Walker of Christians in Actions always makes sure people have the fixings of a Thanksgiving meal, and this year is no exception,” Wickersham said about a table with sacks filled with cornbread, corn, green beans, cranberry sauce and a whole chicken.

“I certainly want to give a huge shout out to Paris Regional Medical Center as they have prepared the meal for us for the past eight years,” Wickersham said. “Paris Coffee donates the coffee, and people in the community donate items for the warming table.”

Paris Regional’s nutrition services staff prepared roughly 600 meals for the day, a project that took several months of planning and the extra efforts of a busy staff.

“It takes a lot of preparation, obviously a lot planning and cooking in advance because it’s in addition to what the staff already does in running the cafe at the hospital and cooking all the inpatient meals,” said Savannah Abbott, hospital director of marketing and communications. “We are super grateful to the staff, and we’re glad that we are able to do this each year. It’s just a great service that Christians in Action provides, and we’re happy to be able to partner with them.”

“We have to make sure that we can order all the food and get what we need,” Hall said. “So, we start in the summer to make sure our vendors can supply us with the amount of turkey and the ham and all the trimmings. Then we have spent the last couple of days preparing the food with several different people doing that.

“It’s been a joy because I have people who come in on their days off to help,” Hall said. “Most of my staff wants to do this event, and they just do it with such a loving heart.”

Volunteers manned the serving line, including those from Prairiland Beta Club and from Trinity Christian Academy.

“This is something that we just do not miss,” Prairiland High School teacher and Beta Club sponsor Shawonna Rhodes said about one of the club’s many community service projects. “It’s pretty awesome to teach the kids how to give back, and helping with the Christians in Action Thanksgiving meal does just that.”

The Christians In Action held their annual Thanksgiving meal on Tuesday, although instead of sitting down to a meal, the group handed out to-go dinners.