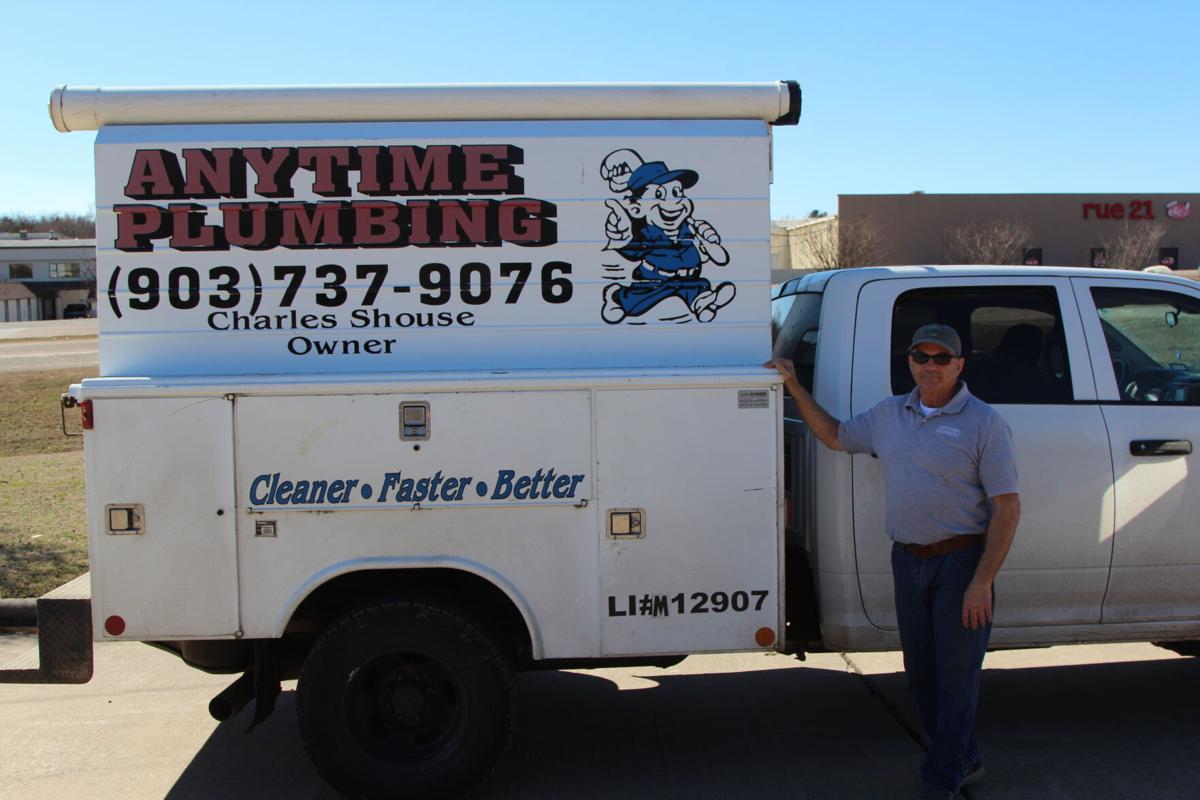 Owner Charles Shouse stands by his truck after a busy week of plumbing work. Shouse was working around the clock to help residents whose pipes were damaged due to the cold.

Plumbers found the pipe behind the toilet in Klark Byrd’s home in Paris was leaking after it froze Feb. 16 when temperatures dropped below zero during the winter storm. The pipe was fixed in a matter of hours, leaving behind another job — wall repair.

Charles Shouse’s phone was ringing off the hook last week. The local plumber’s services were in high demand after subzero temperatures battered the state of Texas, and Paris residents were faced with busted pipes and plumbing issues from the cold.

“I answer my phone 24 hours a day. People started calling me three or four nights ago at 2:30 (a.m.),” Shouse said Friday. “So I'm talking on the phone at 2:30, and once I started talking, the phone kept ringing and I didn't get to go back to sleep.”

He was getting so many calls and messages that he had to silence his phone for a while just to deal with the projects he had on hand.

“At one point, we had to quit answering the phone so we could work,” Shouse said. “But then we started going through our voicemails and stuff and calling people back, and it’s pretty stressful.”

Not only did Shouse deal with the overwhelming number of calls, but his wife did, too, when he was up in the wee hours of the morning.

“She said ‘who are you talking to?’” Shouse said with a chuckle.

Some of the breaks Shouse saw in pipes were massive compared to what he’s dealt with in the past as businesses and homeowners dealt with damage that was almost unavoidable due to the cold.

“It was just super duper cold,” Shouse said. “I've been doing this for 30 years and I've never seen some of the size of the splits, the breaks. It's kind of like, ‘are you kidding me?’ But it got colder here than it ever has in probably my lifetime.”

He responded to calls at Dr. David Salas’s clinic and at the rehabilitation and nursing home Heritage House where pipes had busted, causing water to stop flowing. Nursing homes don’t stop operating during severe weather and so Shouse said he worked diligently to get the water back on and do damage control to help some of the more vulnerable members of the Paris community.

Shouse was not alone in having a slammed schedule. Courtney Relford at Diamond C Plumbing & Utilities said by the end of last week, the company had around 130 calls to get to. While she said some issues may have resolved themselves and workers may not have to go to all of the calls, she estimated they’d still be sending plumbers to dozens of homes and businesses to sort out damage from the storm.

While the weather has warmed up significantly this week, Shouse said residents should be prepared that similar catastrophic events could happen in the future. This episode may have been a lesson for everyone that the future might hold a disaster of a similar scale that could cause even more severe damage, he said.

Why some Texans are getting sky-high energy bills

After unusual icy weather left millions of Texans without power, some are facing another crisis: Sky-high electricity bills.