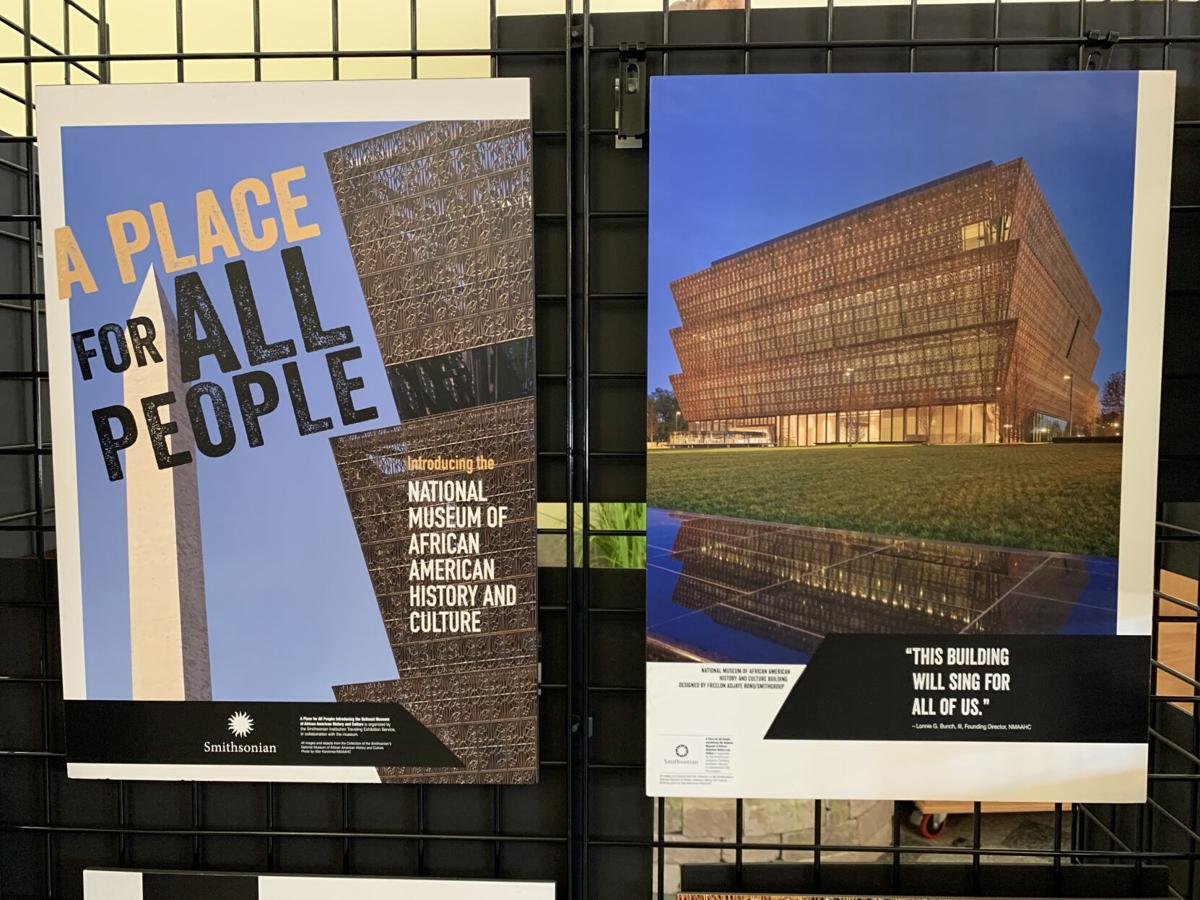 Posters detailing artifacts from the National Museum of African American History and Culture are now available for viewing at the Valley of the Caddo Museum & Cultural Center. The exhibit is titled “A Place for All People.” 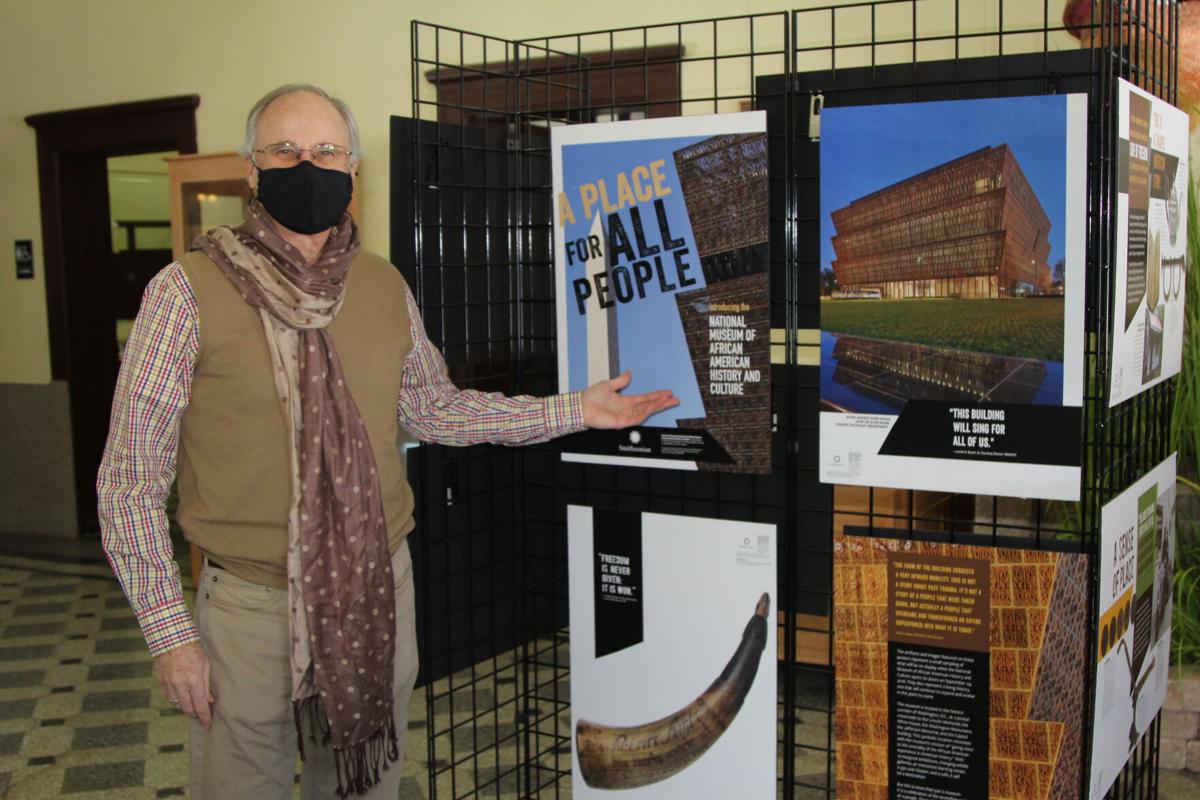 Michael Nickey, president of the board of the Valley of the Caddo Museum & Cultural Center, shows off posters from the "A Place for all People" exhibit in honor of Black History Month.

Lamar County residents now don’t have to travel hundreds of miles to the National Museum of African American History and Culture in Washington to get an immersive experience for Black History Month. For the month of February, a poster collection from the Smithsonian titled “A Place for All People,” which explores displays from the museum, is on display at the Valley of the Caddo Museum & Cultural Center in Paris for all to see.

The museum, which opened in 2016, explores the Black experience in America all the way from the 1600s when Africans were stolen from their native lands and forced into slavery, to the present day. Each poster contains photos of artifacts on display at the museum along with quotes from prominent Black historical and contemporary figures, intended to provoke a dialogue about Black history amongst patrons.

The posters feature centuries of history — victories and atrocities mixed together. There are photos of a powder horn from the 1770s; a bible belonging to Nat Turner, a preacher who organized a slave revolt in 1831; shackles sized for a child from before 1860; photos from the 1960s and ’80s celebrating the Black community in Harlem and Brooklyn; and even shards of stained glass from the bombing of an Alabama church in 1963 that left four young girls dead.

Valley of the Caddo vice president and treasurer Michael Nickey said the museum had been gifted the posters prior to the opening of the NMAAHC and that when he found them, he wanted to make sure they went on display during Black

“We were wanting to do something to recognize Black History Month and what actually kind of prompted it was a (column) in (The Paris News),” Nickey said, referring to a Feb. 2 column about recognizing the month.

Since Nickey spends lots of time at the museum as the board president, he’s had the opportunity to examine the posters and get a taste of what the acclaimed museum in Washington has to offer. He pointed to a quote on one of the posters that stood out to him.

“In every human breast, God has implanted a principle, which we call love of freedom; it is impatient of oppression and pants for deliverance,” it read.

The phrase, by Phillis Wheatley, the first Black author to have a book of poetry published, resonated with Nickey, he said, particularly during turbulent times, socially and politically. He said along with national unrest, he was disheartened, to say the least, by the news that a Ku Klux Klan rally had been planned for October in the Paris area.

“Recently, with the attack on the Capitol, the KKK coming to the Paris area … America supposedly represents freedom, and we don’t. But we don’t think about that,” Nickey said, saying he hopes the posters will push patrons to reckon with that.

One of the posters lists that the NMAAHC has a mission of “giving voice to the centrality of the African American experience in American history,” and Nickey said he hopes those who visit the museum can grapple with the darkest parts of American history, but also celebrate the cultural contributions of Black Americans that have shaped so much of American culture, particularly in the South.

While the museum was closed due to severe weather this week, Nickey said it should be open by next week and the poster exhibit will be available through the middle of next month.

The Valley of the Caddo Museum & Cultural Center is located at 1115 Bonham St. in Paris.

Artwork for all: Local art students showcase their talents at Valley of Caddo museum

High school students from North Lamar and Chisum along with college students from PJC are showing their artwork at the Valley of the Caddo Museum & Cultural Center through January as part of a friendly competition and showcase of talent.

Would you have chosen McConaughey for governor?

Actor Matthew McConaughey has announced he won’t be challenging incumbent Gov. Greg Abbott, a Republican, for the seat in the 2022 election. In a video posted Sunday night, he said political leadership was not a route he was choosing to take “at this moment.” Polls had shown McConaughey would have been a significant threat to Abbott and his Democratic challenger Beto O’Rourke. Would you have voted for McConaughey as Texas governor?