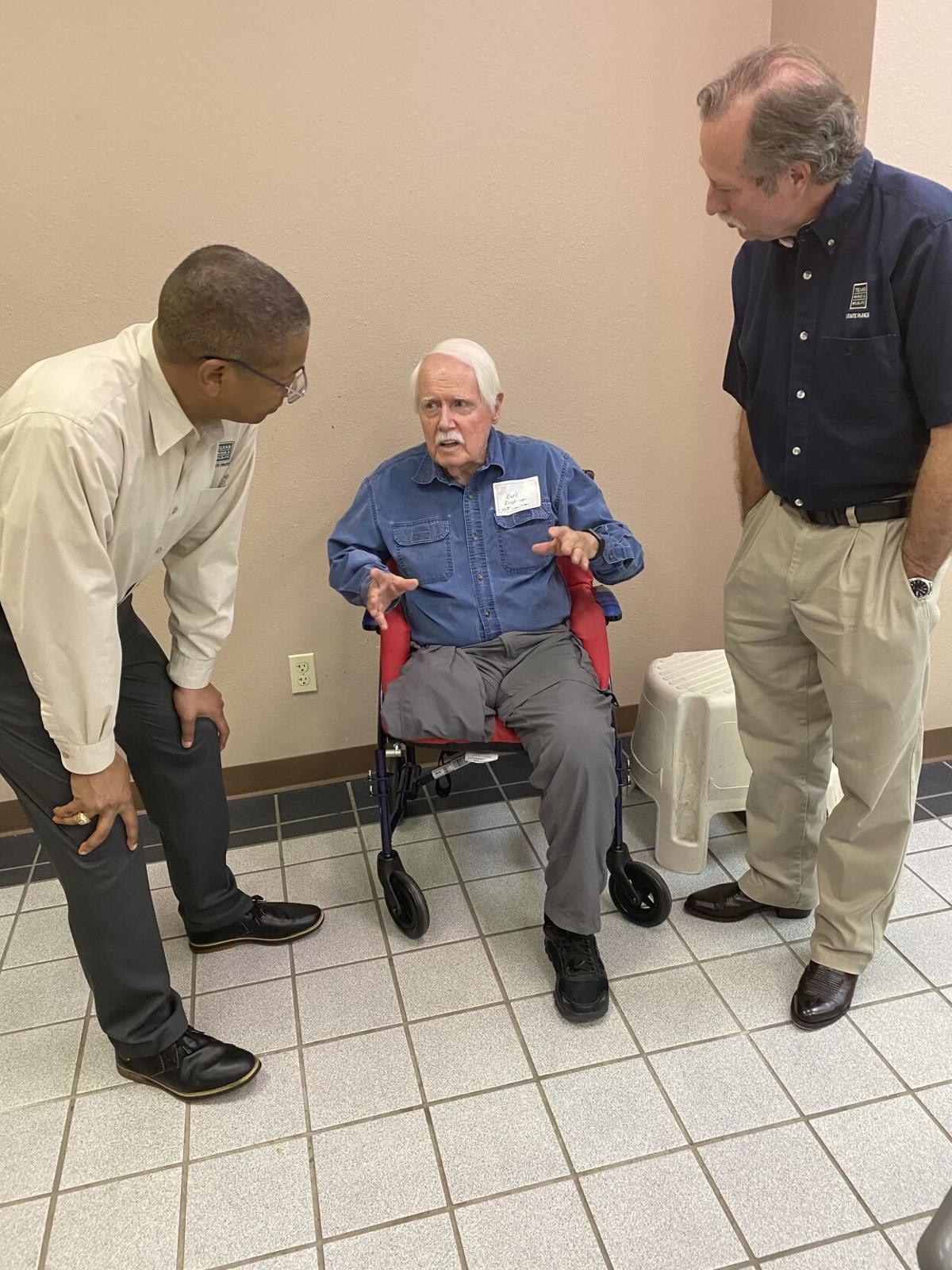 Earl Erickson, center, known as “the father of the Northeast Texas Trail,” visits Wednesday afternoon with Texas Parks Director Rodney Franklin, left, and his assistant, Kevin Good, after the state officials met with Northeast Texas Trail Coalition about a feasibility study to establish the trail as a possible state park.

Earl Erickson, center, known as “the father of the Northeast Texas Trail,” visits Wednesday afternoon with Texas Parks Director Rodney Franklin, left, and his assistant, Kevin Good, after the state officials met with Northeast Texas Trail Coalition about a feasibility study to establish the trail as a possible state park.

“We have come up here to talk to the Northeast Texas Trail Coalition about the next steps in figuring out what the trail would look like if it was a state park,” Texas Parks Division Director Rodney Franklin said after meeting with representatives from the coalition, rail banked agencies, and city and county leaders along the trail.

“We need to develop a plan for the study,” said Kevin Good, special assistant to the director. “We wanted to update all of our partners, get information from them and share with them what to expect.”

Northeast Texas Trails Coalition President Earl Erickson, who has worked for more than a decade to get to this point, equated the news to “a dream come true.”

And Mary Clark, chairman of the trail organization’s legislative committee, shared her surprise after receiving a letter that said the study would take place.

“Did we just do it? Did we just get a study?” Clark said she remarked to a staff member in state Sen. Bryan Hughes’ office about the past four-year, concentrated effort. “It’s so exciting.”

Action on the feasibility study comes after Hughes and state Rep. Gary VanDeaver filed legislation in 2019 and again in 2021 calling for an interim study and report. Although legislation failed to make it to the floor for discussion, the effort drew the attention of Texas Parks & Wildlife, resulting in continued communication with the Northeast Texas Trail Coalition.

After Sept. 1, the agency will contract with one of a number of engineering firms that do public planning.

“The study itself is going to take at least 16 to 18 months,” Franklin said. “To produce a report can take a year-and-a-half between all the conversations, the travel and meetings that take place. That report will shape how we move forward with our commissioners and the rest of Texas Parks & Wildlife, and how it affects the Legislature.”

As early as 2023, there may be some pieces that involve the Legislature, but it could go beyond that as well, Good added.

If the project gains approval, it will be the largest in complexity, although not in cost, undertaken by Texas Parks & Wildlife in recent history.

“It’s not cheap by any means, but will be less costly than developing a park from scratch,” Good said. “But the number of steps that are required and the partners that are engaged, makes it larger than anything I can think of.”

“It will be a complex project,” he said. “The good news is that we have had several communities like Paris that have been doing a lot of work already. And we have been partnering with some of these groups already to do some of the work that you see on the trail today. That funding will continue even as we work through this, which is going to help us move this project forward.”

Both officials expressed optimism about the study’s outcome.

“Trails are the most popular areas in our parks,” Good said. “When we survey our users to ask them what got them to come to one of our parks, ‘trails’ is always at the top of the list.”

Although Texas has an abundance of trails, the longest being the 65-mile Caprock Canyon trail in the Panhandle, Good noted the Northeast Texas Trail is unique because of the number of communities it passes through, and the fact that it starts in the Dallas-Fort Worth area with its huge population.

“It would touch a lot of people that like to get out in nature,” he said. “And this is a perfect opportunity to have them do that, plus bring an economic benefit to communities along the trail. It would be a big plus for everybody involved.”

People from all over are flocking to the 130-mile long Northeast Texas Trail, and Reno resident and trail enthusiast Kelly Whitley and her family could not be more excited.

Which candidate do you back for Texas attorney general?