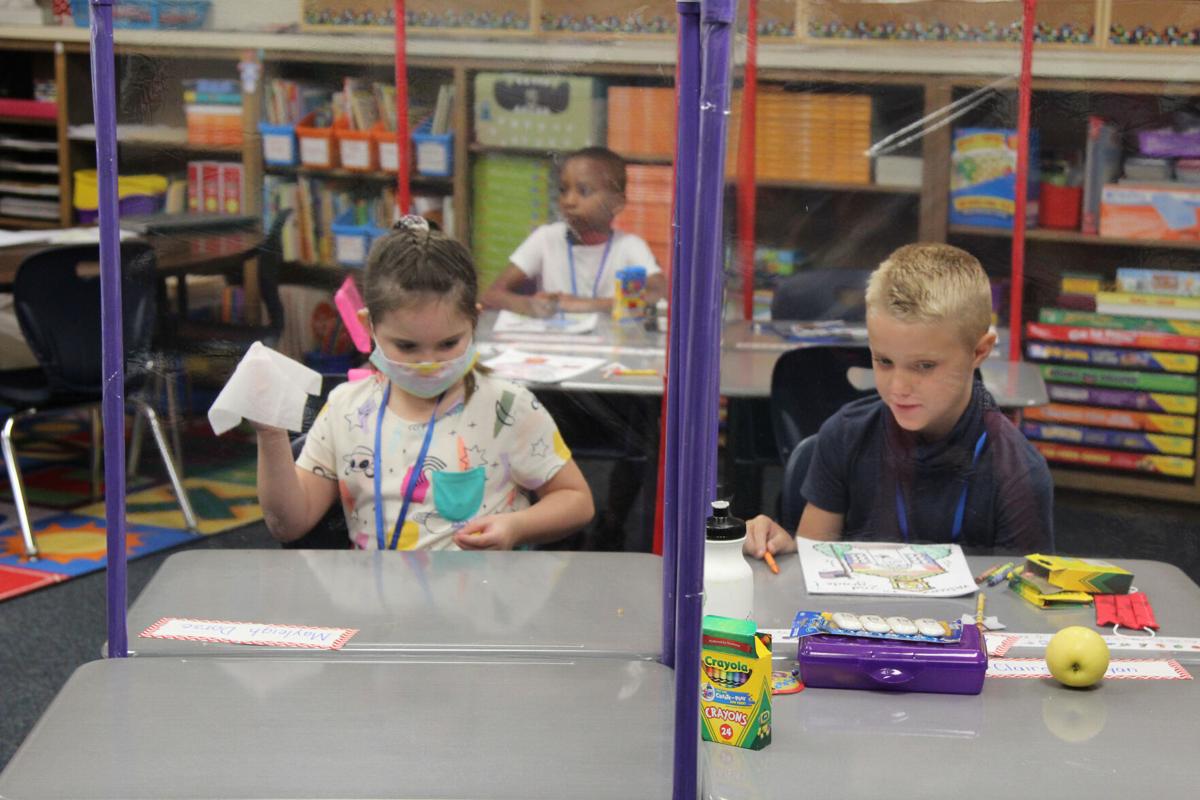 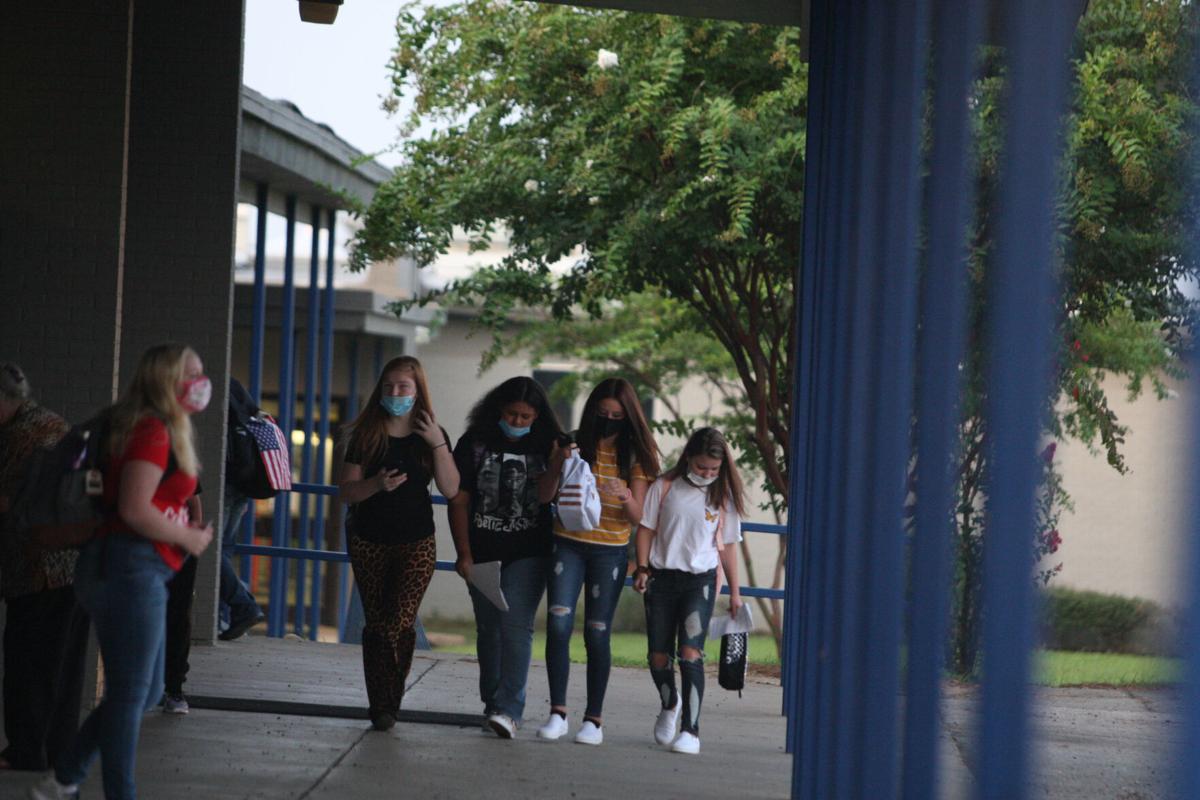 A group of mask-wearing Stone Middle School students walk off the bus as they prepare for the start of the first day of school. 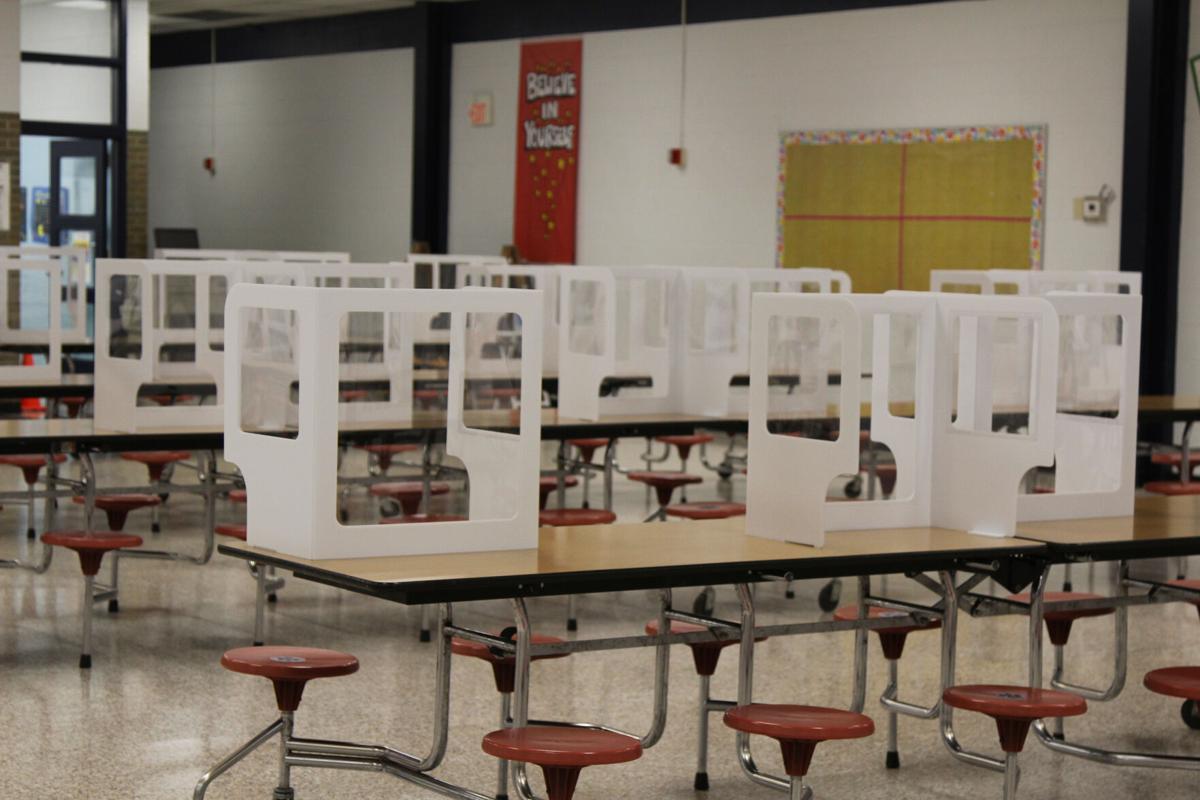 The cafeteria at Justiss Elementary School is ready for students, with screens set up to help them socially distance but still talk to one another over lunch. 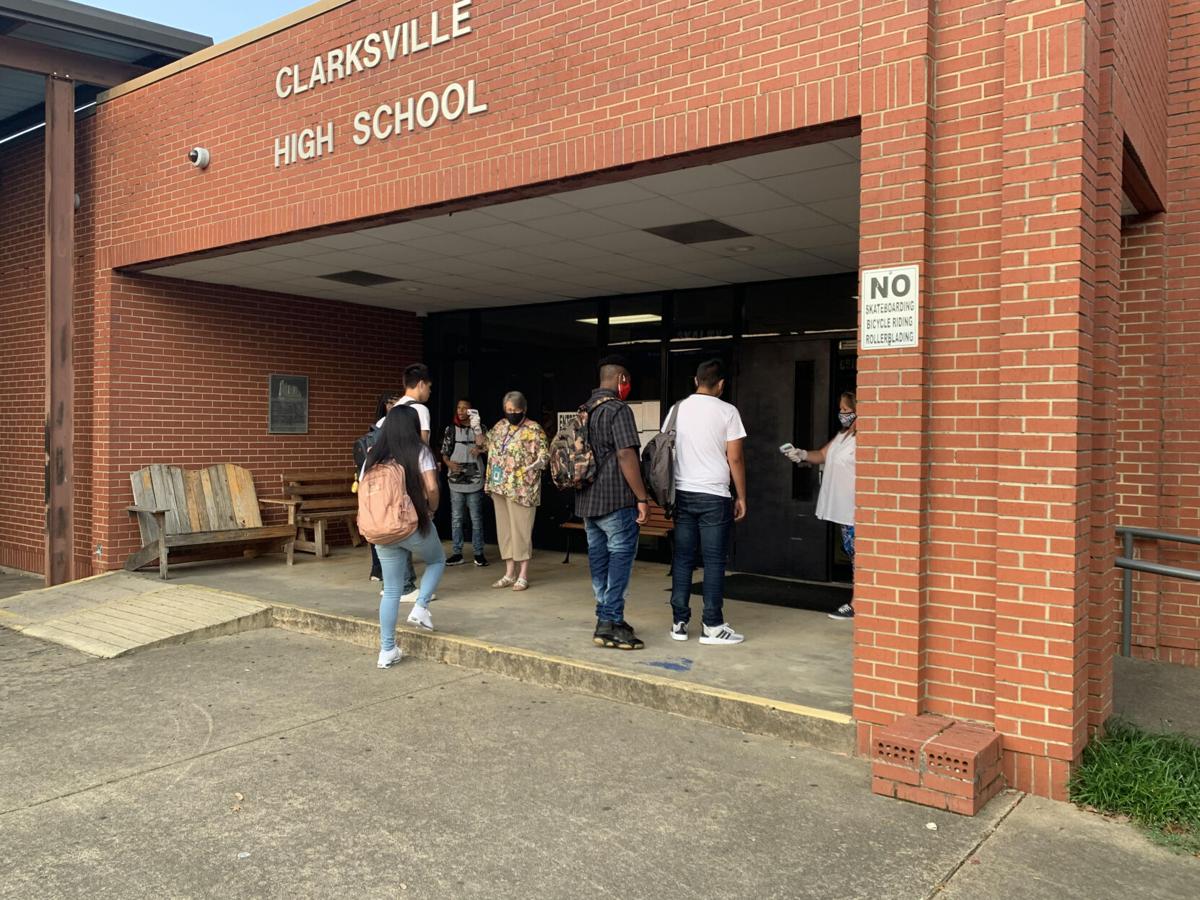 Clarksville High School students line up to get their temperatures taken before entering the building on their first day of school.

A group of mask-wearing Stone Middle School students walk off the bus as they prepare for the start of the first day of school.

The cafeteria at Justiss Elementary School is ready for students, with screens set up to help them socially distance but still talk to one another over lunch.

Clarksville High School students line up to get their temperatures taken before entering the building on their first day of school.

With “Welcome Back Panthers” signs posted throughout the campus, hundreds of North Lamar ISD students flocked back to school earlier today for the first time in almost six months thanks to Covid-19, which continues to pose a threat to communities throughout the nation.

“We are incredibly delighted to have our students and educators back in school, especially after a challenging spring and summer,” Superintendent Kelli Stewart said. “Our teachers and staff have done an amazing job preparing for this school year, and they are excited to reconnect with our students….This morning our hallways were filled with excitement as the students entered the buildings. No matter what challenges we will face, it is going to be a great year.”

“We’ve been preparing for this day at least since June,” Stone Middle School Principal Dee Hudson said after she delivered a welcoming message to seventh- and eighth-grade students in the school’s main gymnasium, reminding students to maintain social distancing and wear masks. Meanwhile, sixth-grade students reported to the “B” gym across a walkway in another wing.

“I am very excited about today, and will be glad to see students back in my classroom,” Johnson said, explaining she will deliver the same lesson on Google Classroom as she does in person for those students who chose virtual instead of in-person learning. “I’ve got everything uploaded and ready.”

Earlier in the morning, Kazyriana Sanders and Ryliee Brown, both seventh-grade students, were first to arrive shortly after 7 a.m.

“I would like to be sleeping this morning, but I have to come to school to play volleyball,” Sanders said, to which Brown added, “I’m not as excited as I thought I would be. I don’t like this corona stuff.”

“I’m excited about coming to school because it’s better than staying at home,” Perry said. “I’m not worried about this new school because I’ll do just fine.”

Kidding around with his friends where a group of eighth-grade boys gathered outside, Brody Stout said he gets bored in school but attends so he can play football and participate in track.

“It gets boring sometimes but you’ve got to come,” the 13-year-old said.

Seventh grade student Lorelei Daniel, 12, of Powderly, said she expects the biggest challenge of the day will be learning to pass others in the hallway without getting too close.

“I like going to school and I am excited to be back,” she said.

Avaon Hill said he wants to learn everything.

The second-grade student at Justiss Elementary said that he didn’t know how he would squeeze everything into one year, but that was his goal.

In an orderly fashion, students finally came back from months of spring break to Paris ISD. Justiss Principal Renee Elmore said everyone did well their first day.

“The parents did good, too,” she said. “I was proud. The parents were so strong.”

Special education teacher Janita Martinez said there were a lot more parent drop-offs this year, and hardly any students on the bus for the first day. Overall, school starting has been pretty calm and orderly. As parents dropped off their children on the first day back, teachers and aides escorted the students to their classrooms in groups, sorted by grade level. A few parents were anxious, Martinez said, adding she got one parent to agree that it would be better for their child to wave from the window while on the way to class.

But almost all of the parents have been supportive of the changes made to accommodate the school during Covid-19.

“I had two or three parents tell me, ‘Y’all are doing so much,’” Elmore said.

Like other classrooms across the county, some are divided by plastic dividers, some have desks spaced farther apart and others have students seated at every other desk. All of the students were wearing masks, except while eating their breakfast at their desk.

In the cafeteria, large, white and plastic dividers sat on the tables, with clear windows for the students to see through.

But it seemed everyone was happy to be back in school.

Clair O’Bryan, a second-grade student in Amy Hooten’s classroom, said she had missed her friends and the classroom.

“I just love school,” she said.

Her classmate Karis Furtch said she wanted to learn art and math.

Down the kindergarten hallway, Ravina Helsel said she had been on the playground before, but never in a classroom at Justiss.

“I have never been here before, but I want to play on the playground,” Ravina said.

From a distance, the first day at Clarksville High School looked normal. Students milled around, catching up with friends after a long summer, and teachers waited by the doors, eager to welcome them back to school. But before anyone could make it through the black metal doors, they had to stop and wait to get approval: As long as their temperatures were in an acceptable range, they could get in.

School in the era of Covid-19 is different. It comes packed with hand sanitizer, extra cleaning equipment and the addition of a mask, making it difficult to spot a friend in a crowd. But Taquavious Rosser was still excited to be back at his old stomping grounds. As a freshman, this is Rosser’s first day of high school, and even though he said it’s not really what he envisioned it would be, he’s ready to return.

“It feels good to me… and I get to see my friends,” Rosser said.

Superintendent Kermit Ward said in addition to taking temperatures, the school is doing regular deep cleans to keep the building as sanitary as possible. All high school and middle school students are required to wear masks, but for elementary students under the age of 10, it’s at the teacher’s discretion. Ward said the district is taking every possible precaution, but that didn’t mean the months leading up to the first day weren’t anxiety-provoking.

“I’m relieved (to have gotten to the first day),” Ward said. “And the reason why I say that is because you don’t know how good your plan is until you actually are within it. And so just when we pushed school back to Sept. 8, it created more time for us to have a little anxiety and a little bit more time for us to just think about what we don’t have in place. So now we’re in it. So it’s time to just move in and get into the school year.”

He said so far, everything is going as planned. To encourage social distancing, Principal Roshea Phillips created one-way hallways so students won’t be passing each other as they go between classes, but keeping crowded spaces to a minimum might actually be easier this year because she said about 60% of high school students elected to learn from home using laptops provided by the district.

Irma Zuniga is the parent of two students who are part of the 40% that decided to try in-person learning. She said while she’s a little nervous about her kids returning to school in the midst of a pandemic, she knows the school is following every safety precaution and she wanted her boys to be able to see their friends and have some sense of normalcy in their lives. She’s made the tough choice many parents have been caught up in

“Well, this is kind of an uncertain (time),” Zuniga said. “Because (my kids) are so excited to go back to school, but at the same time we are afraid about Covid... We did consider (at home learning) but they’re just so excited to be back.”

First class: Detroit ISD welcomes students back for the first day of school

As Detroit ISD students head back to school, there’s excitement in the air and masks for all faculty. “Like everybody else, we’re kind of figuring it out as we go,” Principal Henry Sharp said. “But my teachers have been working on it, and I think we’ve pretty much got it down.”