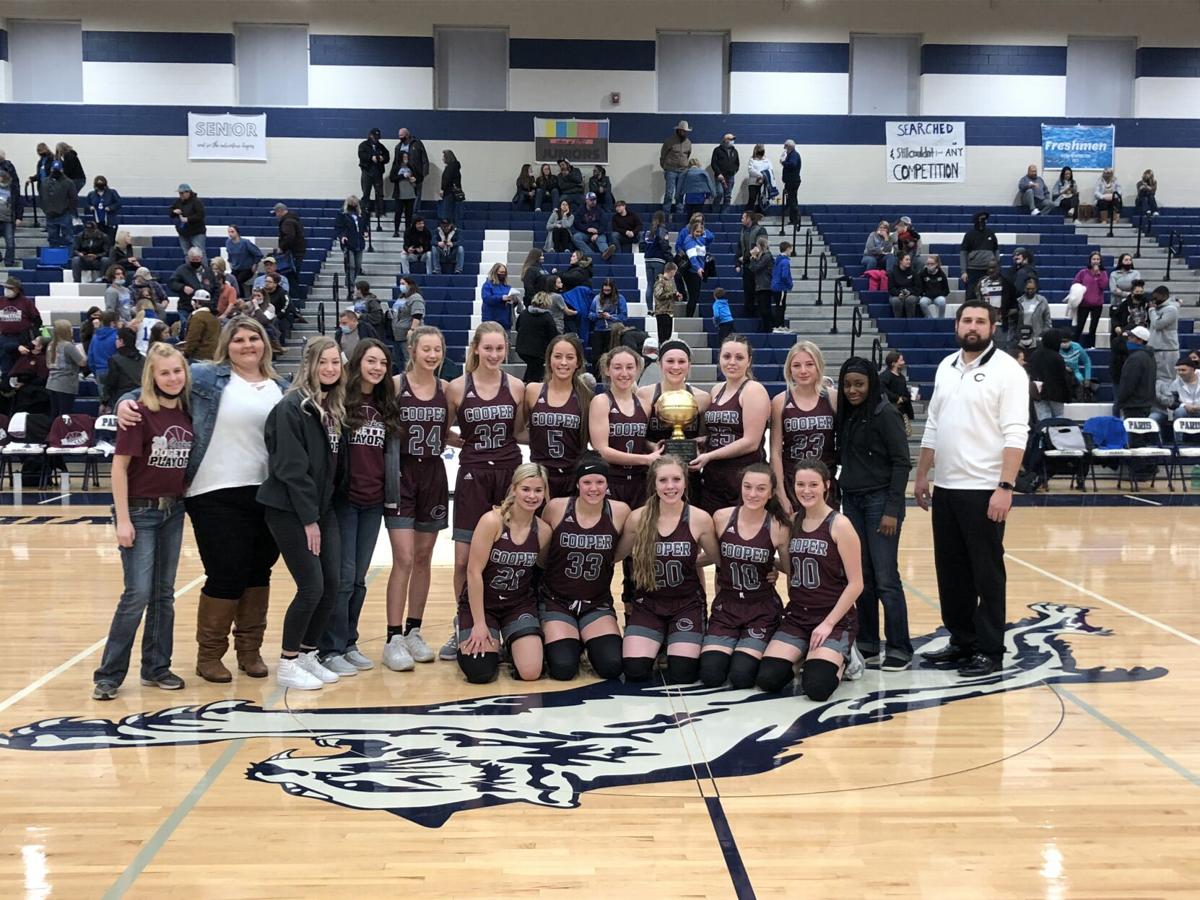 Pictured, the Cooper Dogette players and coaching staff pose with their bi-district trophy after downing Detroit. 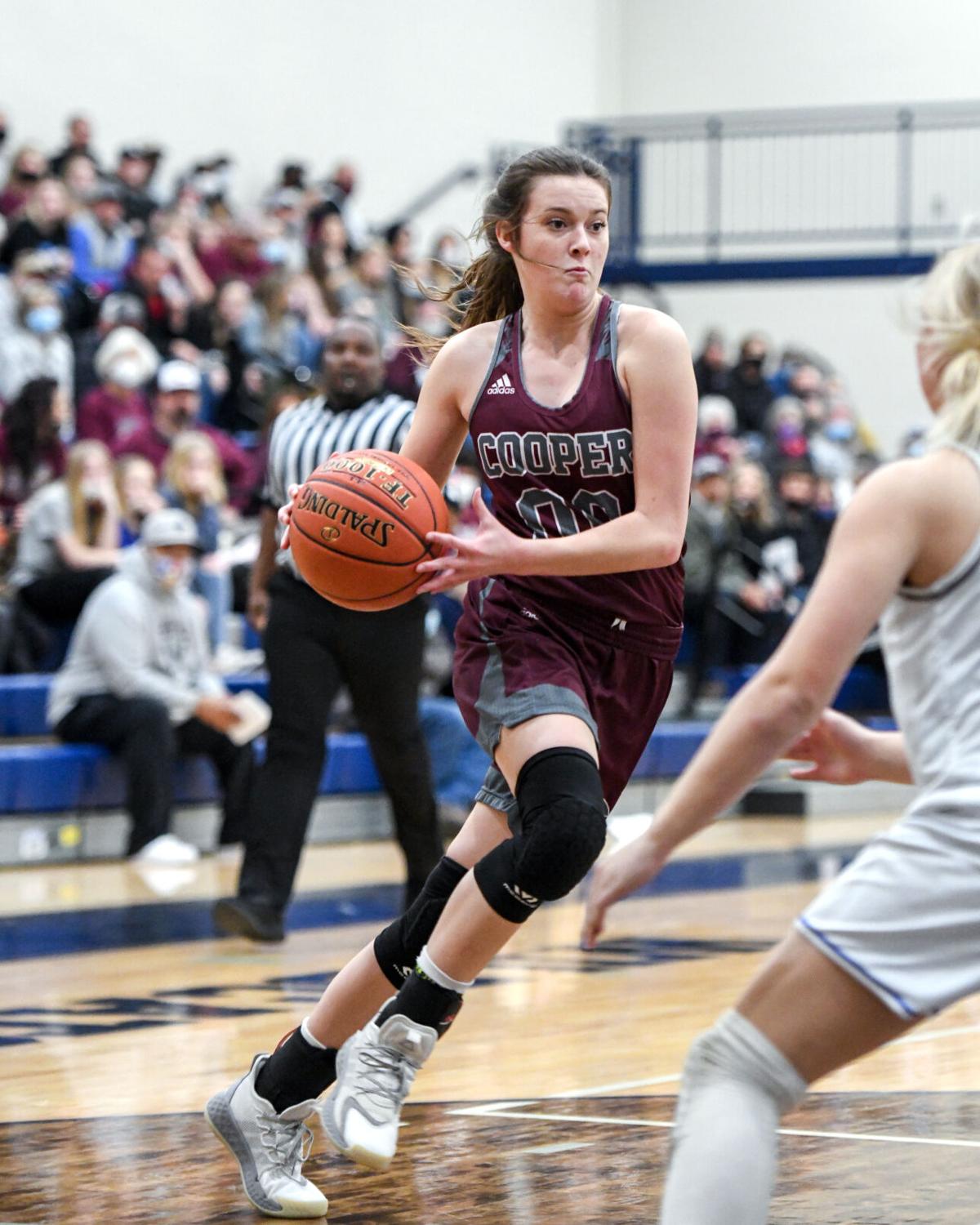 Dogette Chesney Kinnamon drives to the hoop against Detroit. 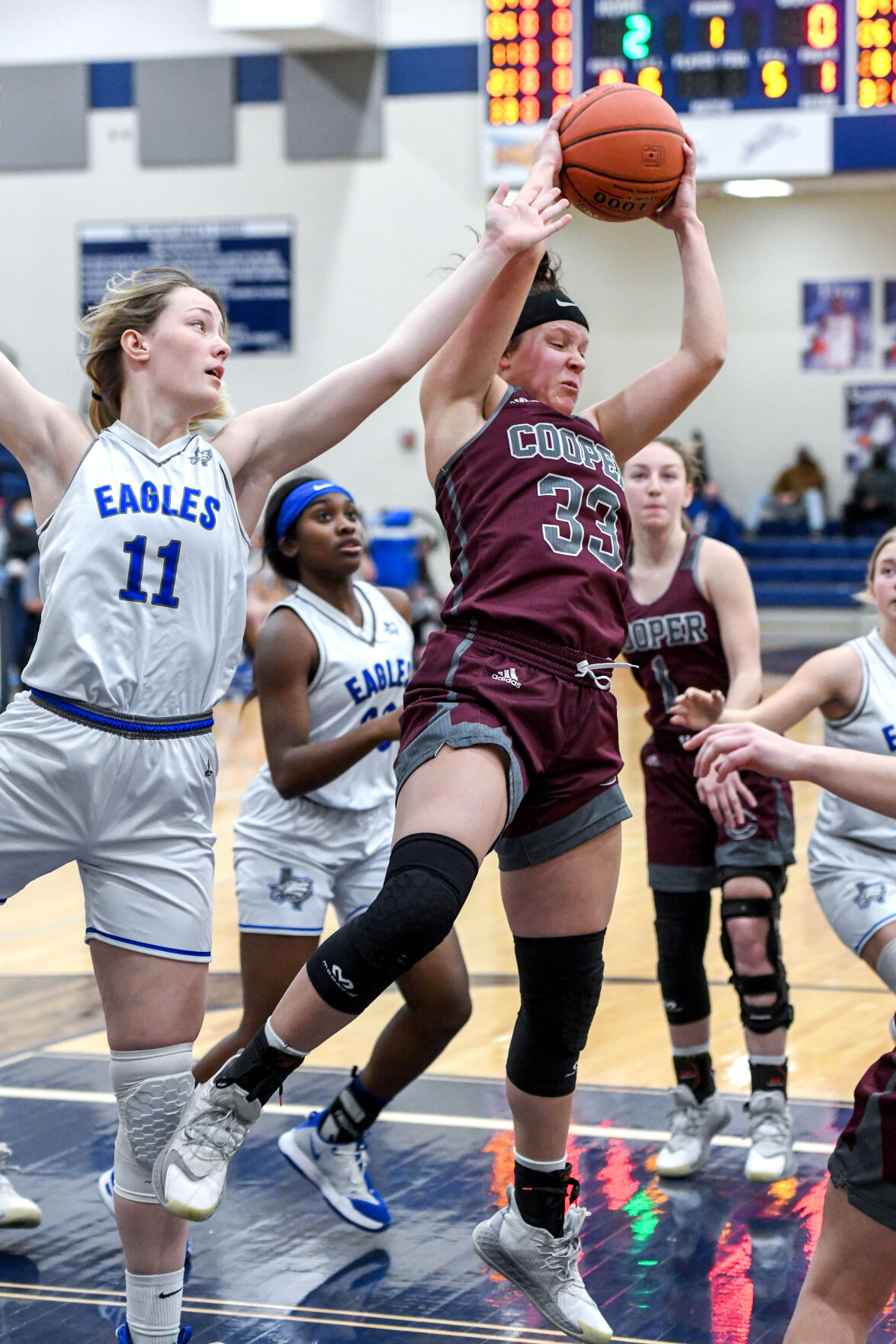 Cooper's Presley Limbaugh pulls down a rebound in her team's win over Detroit. 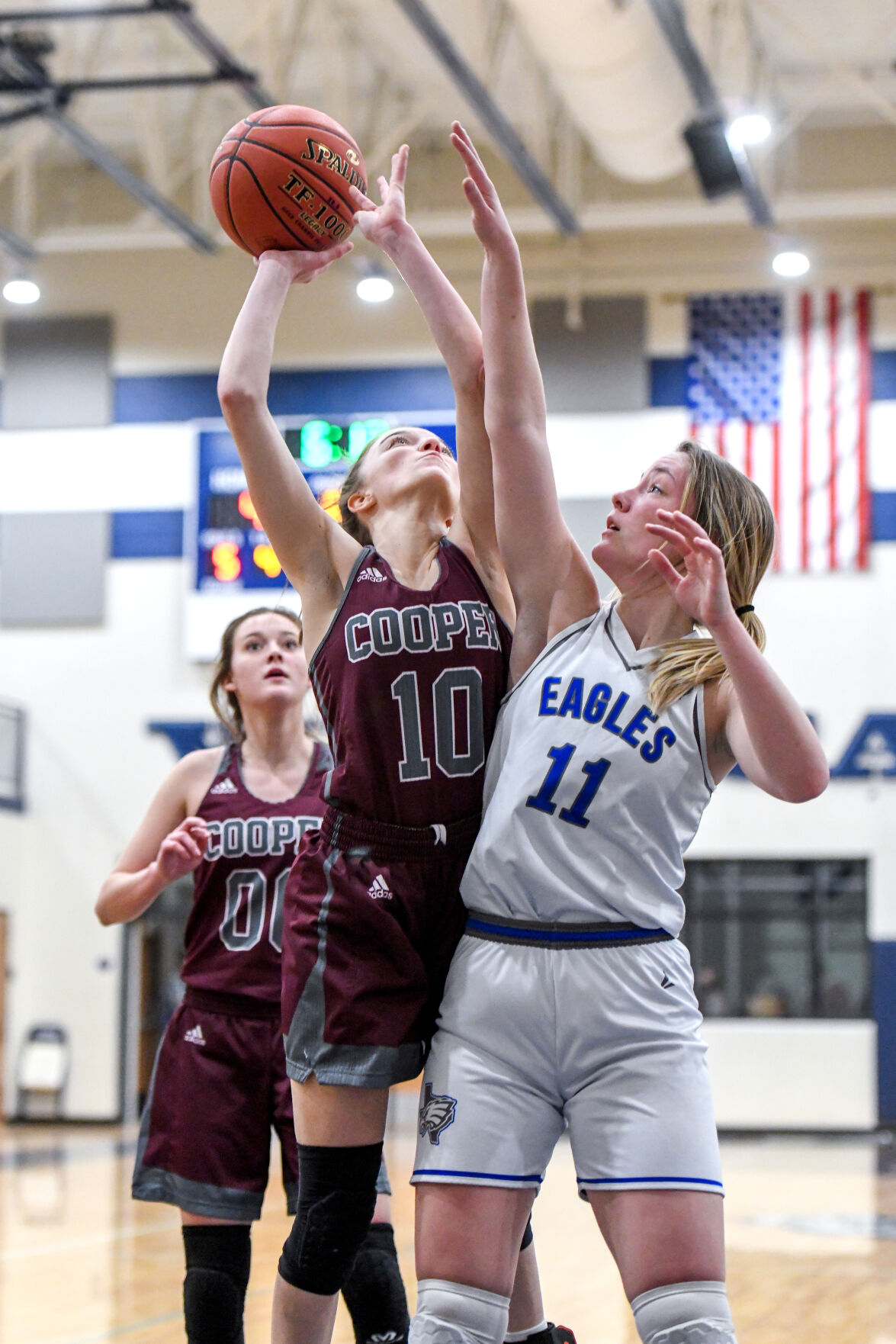 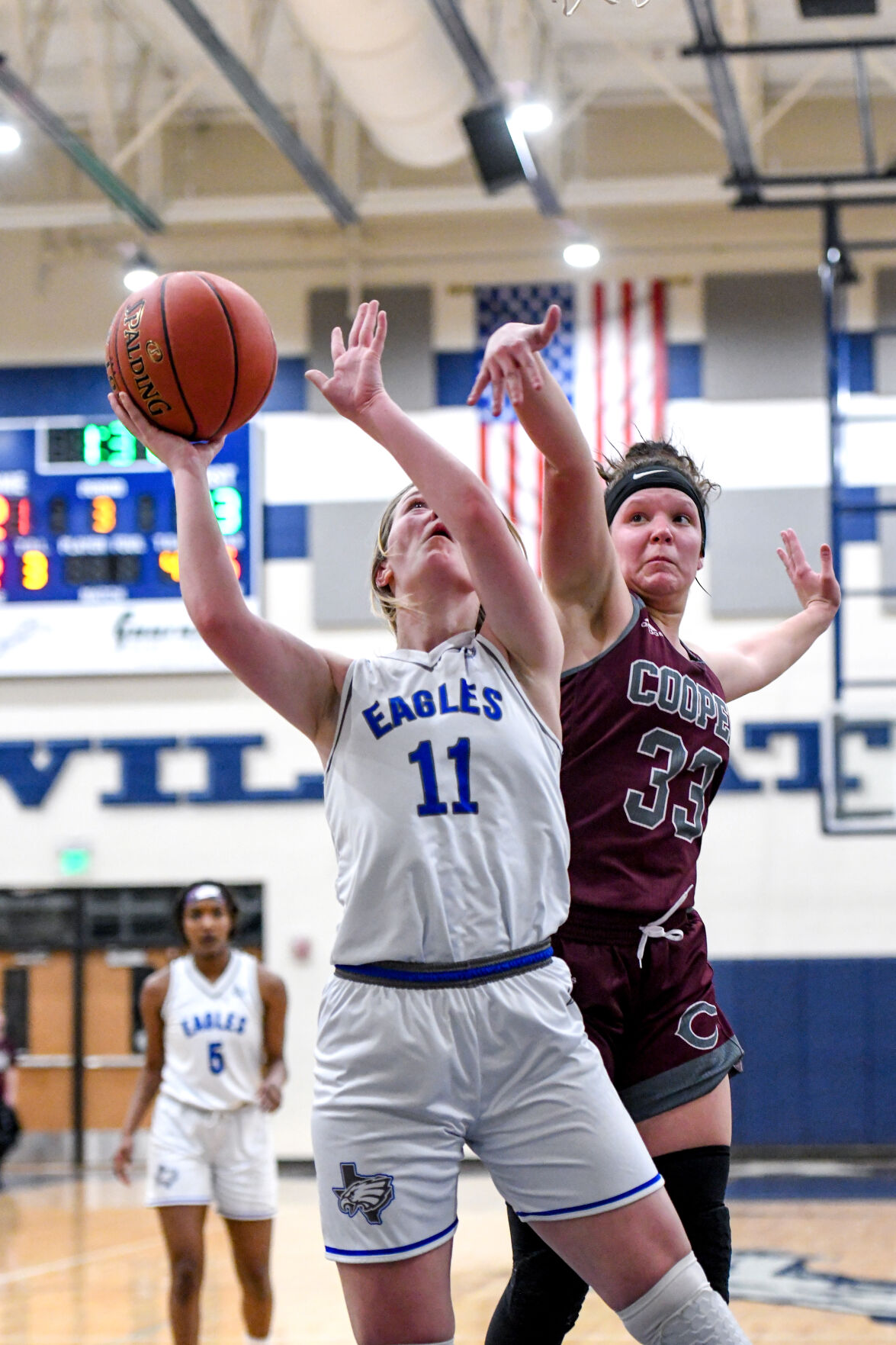 Pictured, the Cooper Dogette players and coaching staff pose with their bi-district trophy after downing Detroit.

Dogette Chesney Kinnamon drives to the hoop against Detroit.

Cooper's Presley Limbaugh pulls down a rebound in her team's win over Detroit.

It was a matchup of Red River Valley teams Thursday, as the Cooper Dogettes faced off against the Detroit Lady Eagles in the first round of the playoffs. The Lady Eagles didn’t go down without a fight, but ultimately it was the Dogettes who hoisted the bi-district championship trophy on the back of exemplary defense in a 53-32 victory.

“It feels absolutely amazing,” Cooper senior point guard Macy Green said with a grin. “This is something we’ve never done before and it’s just a great feeling.”

Detroit got on the board first, thanks to a pair of free throws by Madison Gaddis, but their lead would not last long, as Cooper would tie the game up and then take the lead on the next two possessions.

With suffocating defensive pressure, the Dogettes limited the Lady Eagles to just a single field goal in the period, scored by CC Runels in the paint off of a superb assist by guard Braylin Craig. Twice in the final minute and a half, Detroit was unable to get shot as a result of Cooper’s tenacity. The Dogettes went into the second quarter up 12-4.

The Lady Eagles only found marginally more offensive success in the second quarter, scoring six points. However, they stepped up their own defense, and Cooper had a much harder time coming by points too in the quarter. With both teams playing stingy defense, the second quarter saw the game get a bit chippy, as hard fouls were committed by both sides.

After the Dogettes extended the lead to double digits for the first time on a layup by guard Whitney Langley, the Lady Eagles were able to claw back into the game and cut the deficit to just five. However, a pair of late buckets by Presley Limbaugh gave Cooper a nine-point halftime lead.

Detroit senior Abi Shelby put her team on her back in the third quarter, scoring all 13 of her team’s points in the period. She found success with a number of nifty post moves, as well as drawing contact and draining her free throws.

“Abi is a tremendous player,” Detroit head coach Joey Musgrove said after the game. “She’s a hustler and she works hard, and she’s a leader to the younger girls who leads by example. She’s going to go far in life, and whatever she sets her mind to she can be successful in.”

Despite Shelby’s best efforts, Cooper again was able to extend its lead, led by seven points from Limbaugh.

Throughout the quarter, Shelby would bring the deficit into single digits, only for a Dogette — most often Limbaugh — to answer back with a basket on the other end.

“Every time they’d go on a run and cut into the lead, she was there with an answer,” Cooper head coach Samuel Hollenshead said. “She was really big for us.”

“In the lead like that, I knew we needed to slow it down and not force anything,” Limbaugh added.

In the fourth quarter, Cooper’s overpowering defense once again took center stage, as the Dogettes limited Detroit to nine points on just two field goals and a handful of free throws.

Throughout the game, Green played an integral role in the Dogettes’ success on both ends of the court, making an impact not seen by simply looking at the game’s statistics.

“Macy really does everything you want a point guard to do,” Hollenshead said. “She’s a great defensive player and anchors our defense, and she also is the anchor to the offense in the way she runs everything from the point.”

As the Dogettes extended their lead in the final period, the fans in maroon rbecame more and more animated, serenading their team with cheers. And when freshman Faith McGuire drilled the final nail in the coffin with a corner 3-pointer with just about 30 seconds left in the game, the Cooper faithful reached a veritable fever pitch.

“We love our fans so much,” Limbaugh said with a chuckle. “It’s crazy; we’ve never had this much love before.”

Limbaugh led her team with 15 points, and Murray joined her in double figures with 10. Kenzlee Randle scored nine, Whitney Langley had six, McGuire had three and Green, Caitlin Brown and Heidi Wood all finished with two points.

For Detroit, Shelby made sure her final game was a memorable one, scoring a game-high 21 points and grabbing 18 rebounds. Tatahlavia Rosser scored six points, Gaddis and Runels each scored a pair and Shelby Eudy contributed a point.

Musgrove said he’s proud of how his team competed not just in the bi-district game, but over the course of the Lady Eagles’ whole season.

“We overcame a lot of obstacles this year, with injuries and players being ineligible and things like that,” he said. “At the start of the season we set a goal to not just make the playoffs but to win a playoff game. And even though we didn’t quite make that goal, I’m still proud of this group.”

For the Dogettes, Hollenshead said his team is going to savor the win for quite some time while readying themselves to keep their playoff run alive.

“This is a huge win for these girls and the program,” Hollenshead said. “I’m so proud of them. There were some things that didn’t exactly go to plan, but they adjusted on the fly and did real well, and I just couldn’t be happier for them.”

Did the Covid-19 pandemic change how you shop?

Throughout the pandemic, retailers responded to reduced capacity orders and shopper concerns by offering more robust e-commerce and contactless purchase systems. As more people receive a Covid-19 vaccine, corporate leaders are looking at what consumer spending will look like next. Did the pandemic change your shopping habits?