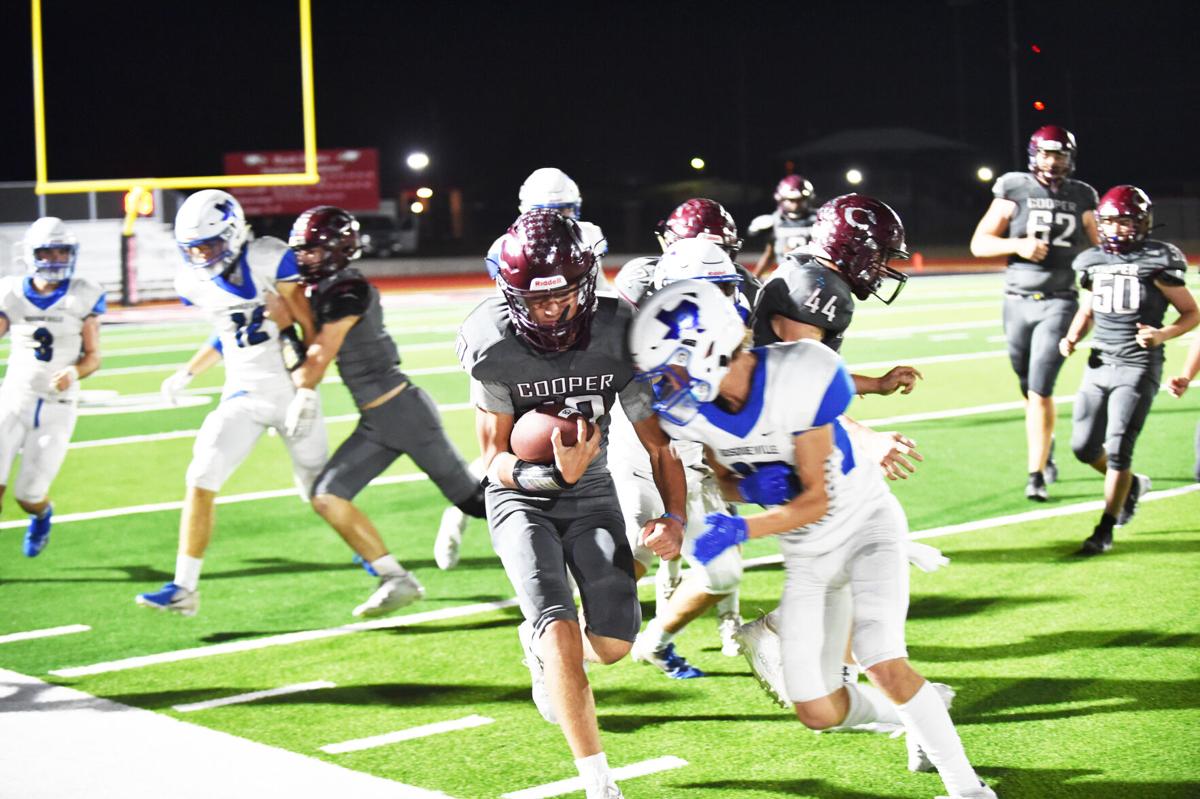 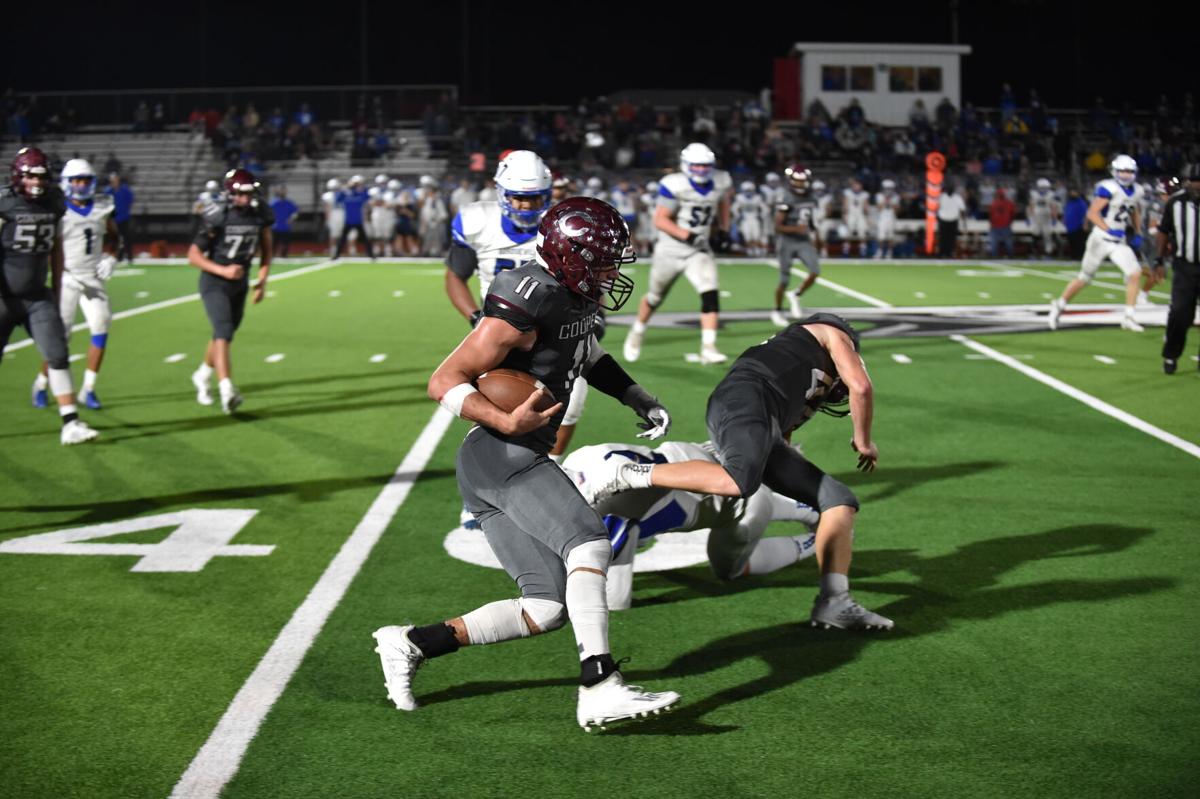 Pictured, Cooper QB Jaxson McGuire finds a hole and breaks off a big gain in Friday's loss to Bosqueville.

Pictured, Cooper QB Jaxson McGuire finds a hole and breaks off a big gain in Friday's loss to Bosqueville.

The Cooper Bulldogs headed to Rusk High School on Friday with plans to extend their seven-week win streak that earned them the bi-district championship, but they struggled to contain an explosive Bosqueville Bulldogs offense, and their opponent claimed the Area championship with a 44-12 victory.

Heading into the gridiron match, Cooper was feeling good about its chances. The team had won all but one game this season, with the loss coming 40-33 against Collinsville in the second week of play. Two games this season were shutouts — 54-0 the first week against Grand Saline and 56-0 against Alba-Golden on Nov. 7. Cooper won the bi-district championship 32-12 against Trenton.

Cooper head coach Rod Castorena pointed to his group of seniors as a key part in the team’s success.

“Those 10 kids did a tremendous job of leading us. It’s always important to have a strong core of senior leadership, whether it’s 10 kids or two,” he said. “They had a willingness to work, be coached and go out and battle.”

The Bosqueville Bulldogs came to Rusk on a three-week win streak of blowout scores — 57-35 against Tolar, 49-14 against Hamilton and 72-8 against Marlin. Its offense has been powered by quarterback Hunter Henexson, halfback Jay King and wide receiver John Youens, the latter of whom on defense also stymied Cooper’s offense.

Cooper was able to make some big plays, notably in the second quarter. Bosqueville had taken an 11-0 lead after a field goal early in the quarter. Fans leapt to their feet as senior quarterback Jaxson McGuire found a seam to carry the ball from Cooper’s 30 to Bosqueville’s 25.

They lost 15 of those yards on the next play due to a chop block penalty. McGuire made up for it despite being met by a host of defenders. With Bosqueville unable to contain him, McGuire picked up a fresh set of downs at Bosqueville’s 10 yard line. He added 4 more yards before handing off to senior running back Chase Morales, who punched it through for 6 points. Bosqueville blocked the extra point attempt, leaving Cooper to trail 11-6.

Bosqueville extended its lead to 18-6 a few minutes later with a 2-yard rushing touchdown, and Cooper used its next possession to answer back. From their own 34, Morales and McGuire worked to put the team into a third and 3 at their own 41. Morales then found a hole in the Bosqueville defense, and he bolted 34 yards to the Bosqueville 25 before an opposing Bulldog dove to catch him by the legs. From there, McGuire faked the handoff to Morales, confusing the defense long enough for the quarterback to sneak through and notch the next 6 points. The extra point attempt failed, leaving Cooper to trail by a touchdown 18-12.

Bosqueville struck back once more before halftime to increase its lead to 25-12. They went on to score 12 points in the third quarter and 7 in the fourth while keeping Cooper out of the end zone.

“Hats off to Bosqueville. They’re a really good football team,” Castorena said. “There were times when we had them at third and long and they were able to make some big time plays.

“Bosqueville was running power and inside zone. They started fast and kind of hit us in the mouth, and it took us a bit to get used to it. But I’m proud of how we responded, scoring a couple touchdowns before halftime.”

Reflecting on the season, the head coach said he believes his team appreciated this year more because of the hardships endured last season, when they finished 3-7 and with only a pair of district victories.

“But that’s a testament to this group of guys,” he said. “They showed up every day ready to go.

“The future is really bright for Cooper football. The kids know our systems — our offense and defense — and how we do things. JV had a great season and won their district, and some of those guys will be called on to step up for us. The seniors set the tone and the other guys know what’s expected of them.”

How important is additional Covid-19 relief?

Congress is returning to Capitol Hill for one final attempt at deal-making on year-end business. Covid-19 relief, a $1.4 trillion catchall spending package, and defense policy — and a final burst of judicial nominees — dominate a truncated two- or three-week session. While lawmakers will need to pass a stopgap spending bill known as a continuing resolution to keep the government running, how important is it to you that they approve more spending for Covid-19 relief?