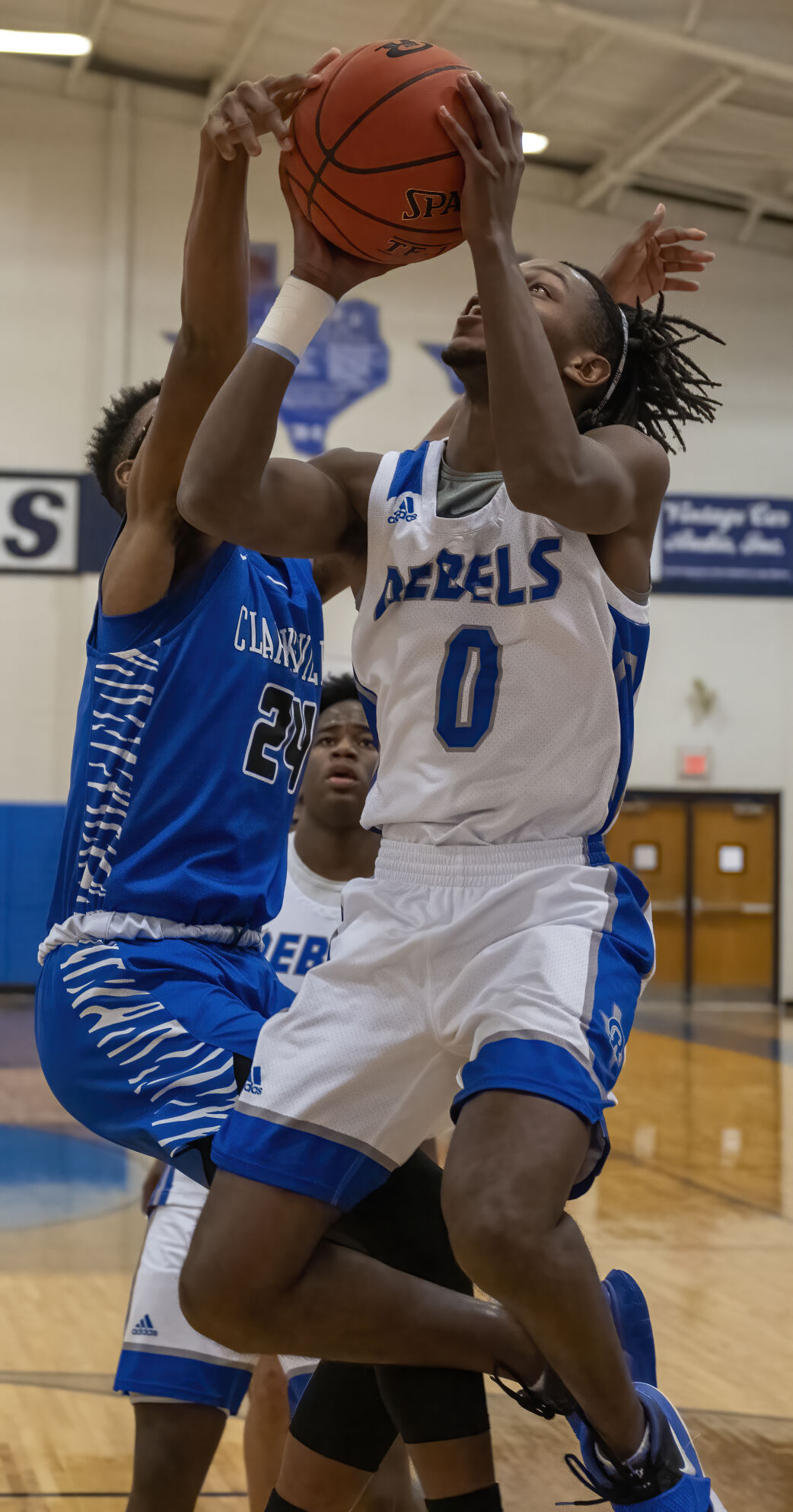 Pictured, Rebel Zachariah Lane is fouled by Tiger Olajuwon Woodberry as he drives to the paint. Lane scored a game-high 28 points. 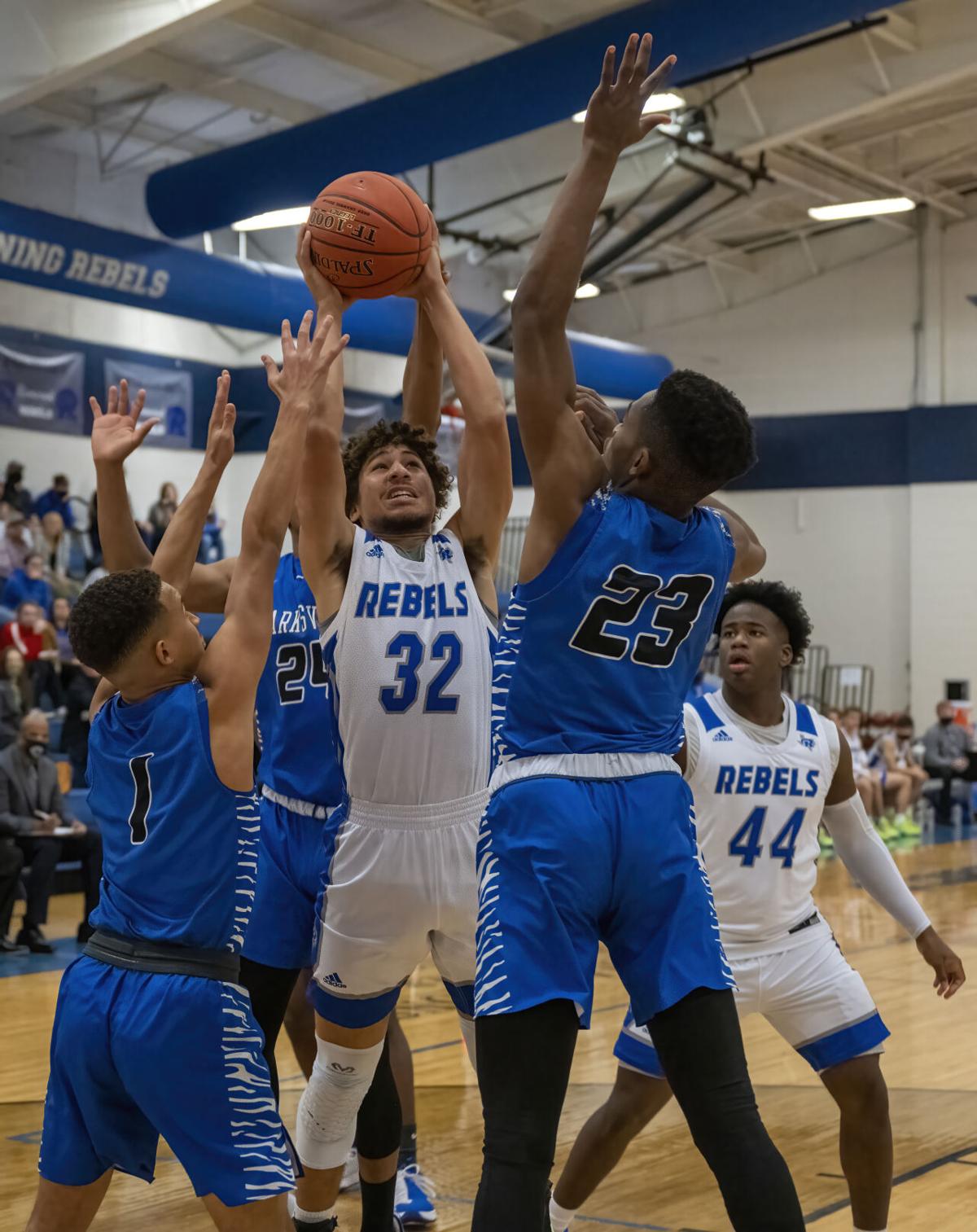 Rebel Bradyn English puts up a shot in traffic in Friday's win over rival Clarksville. 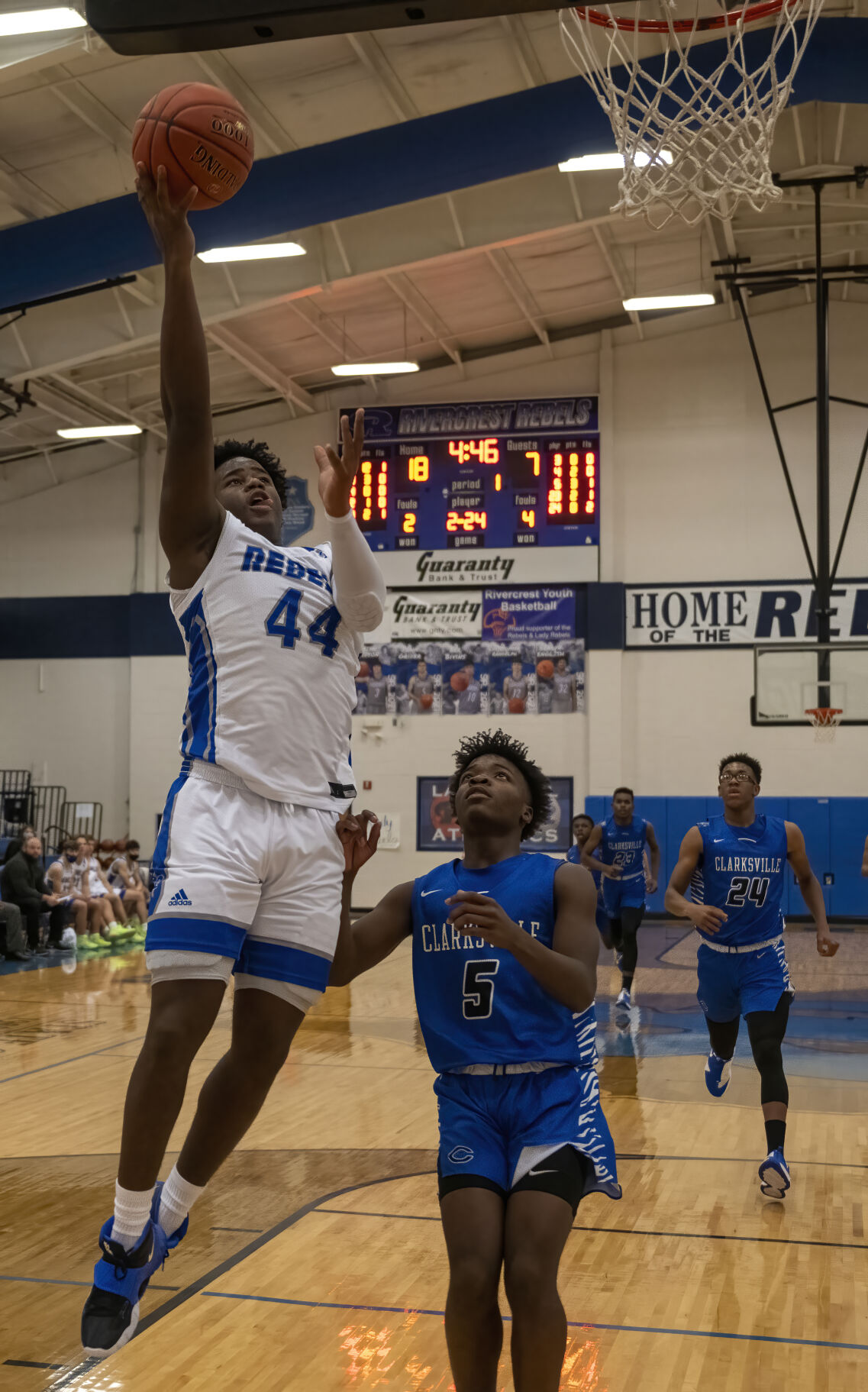 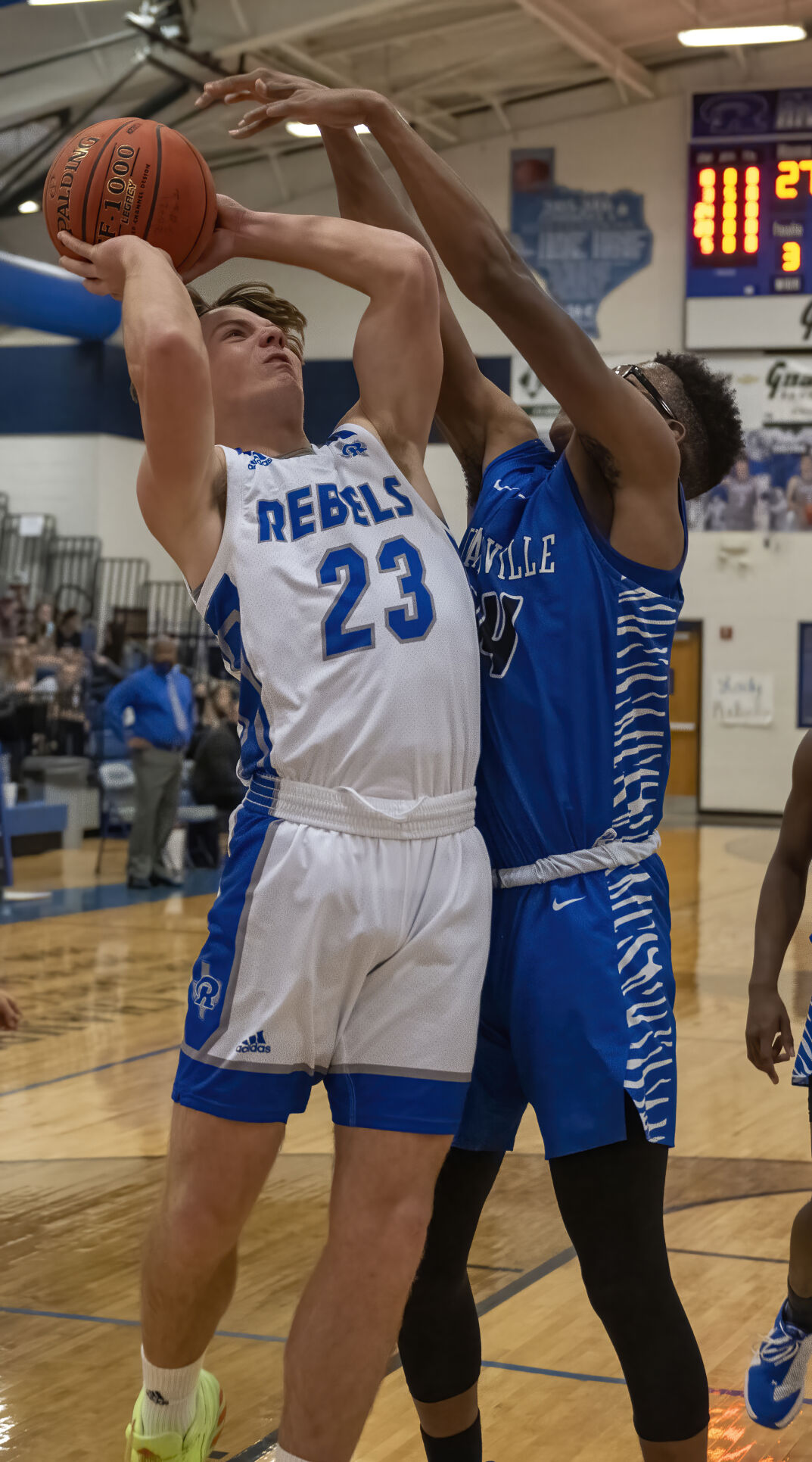 Rebel Kirk Killian scores in the post against the Clarksville Tigers on Friday. 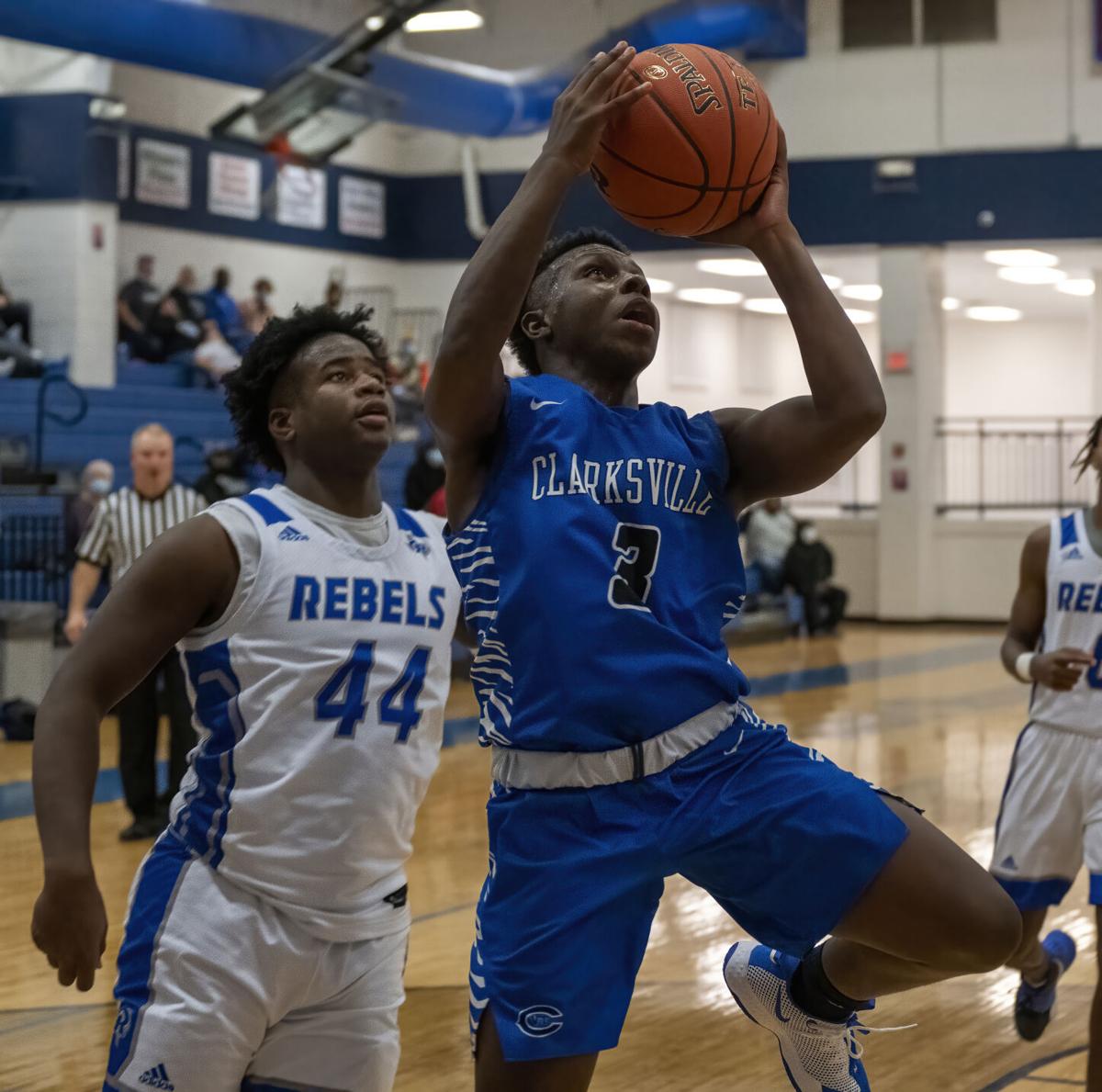 Clarksville Tiger Devin Scales drives to the hoop against Rivercrest on Friday.

Pictured, Rebel Zachariah Lane is fouled by Tiger Olajuwon Woodberry as he drives to the paint. Lane scored a game-high 28 points.

Rebel Bradyn English puts up a shot in traffic in Friday's win over rival Clarksville.

Rebel Kirk Killian scores in the post against the Clarksville Tigers on Friday.

Clarksville Tiger Devin Scales drives to the hoop against Rivercrest on Friday.

Every so often, a team will have one of those games where it seems like if they take it, they make it. The Rivercrest Rebels had one such game on Friday, downing Clarksville 96-50 on the back of simply electric offensive execution. In doing so, the Rebels also earned their first win over their cross-county foes in 14 years.

The two teams traded baskets in the opening moments of the game, but it didn’t take long for the Rebels to pull away and create separation, as the Blue Tigers were simply incapable of keeping up with the Rebels’ fiery start from the field.

Senior Zachariah Lane was explosive in the opening period, scoring 12 of his team’s first 15 points. He would finish the first quarter with 14 and would end the game with 28 huge points to lead all scorers.

“A lot of credit has to go to my teammates for getting me the ball in good spots and finding me when I was open,” Lane said after the game.

A post move by Tiger Olajuwon Woodberry cut the Rebels’ lead to 12-7 just a little more than two minutes into the quarter, but that would be the closest the game would ever be.

The margin reached double-digits when Rivercrest point guard Damian Davidson drove to the basket, drew the foul and scored for an and-one opportunity, followed by a made free throw to push the score to 18-7.

The Rebels did not slow their simply alarming scoring pace, and by the time the first quarter drew to a close, the score was 34-12.

The Rebels picked up right where they left off in the second quarter, as baskets in the early goings by Lane, Darrion Ricks and John Grider pushed the lead to 45-14 in the opening minutes.

Lane punctuated the run with a stop-and-pop 3-pointer with a hand right in his face. It was just one of those nights.

“It seemed like we made everything we put up tonight,” English said. “When they shoot the ball like they did today, it definitely makes my job easier as a coach.”

Clarksville guard Michael Love showed some impressive range late in the quarter, draining a 3-pointer from well beyond the arc, as well as a long jumpshot from just inside the 3-point line at the top of the key.

The third quarter started just like the first two for the Rebels, which is to stay it started with a lot of offense in a short amount of time. Senior Bradyn English scored the opening basket of the quarter on a nice move in the post, Kamryn English scored on a cross-court outlet pass from Lane and Ricks stole the ball at midcourt and coasted in for an easy layup — all in the span of a few seconds.

“I’d say defense was a big key tonight,” Bradyn English said. “We got after it at that end of the floor tonight.”

Later in the quarter, Davidson also added a lot of points to the scoreboard in a hurry, nailing 3-pointers on back-to-back possessions to push the score from 58-23 to 64-23 in a matter of seconds. Davidson would go on to score 17 points in the game.

Lane didn’t just wow with his hot shooting hand, but with his passing too. He routinely hit teammates with long outlet passes, and early in the fourth quarter had the Rivercrest faithful oohing and ahhing when he found Ricks with a no-look pass for an easy bucket in the post.

Though Lane led the way for his team, the Rebels enjoyed balanced scoring from the top of the roster to the bottom, and all five starters scored in double figures.

Clarksville ended the game with a decent flurry of scoring, with baskets coming from Love, guard Nikerion Marcy and Woodberry, but the game had long since been decided by that point,

With the win, Clarksville earned its first win over the Tigers in 14 years. Quincy English said he’s glad to finally break the losing streak.

“Clarksville is Clarksville, and they’ve been beating the crap out of a lot of the teams around here for a number of years,” the coach said. “It definitely feels nice to finally beat them, but at the same time it’s a little bittersweet. I’m from Clarksville, and I hate to see their program down like this. You always want it to be a competitive game.”

Bradyn English said the game serves as a confidence booster for the team, especially as they were coming off their first loss of the season, as they fell to McLeod earlier in the week.

“We had a tough loss Tuesday to McLeod and we were all kind of down in practice Wednesday,” Bradyn English said. “This was definitely a big confidence booster and helped us get our spirits up and saying, ‘We’re still a really good basketball team.’”

Do you support expanding Texas Medicaid?

Texas lawmakers in both chambers of the Legislature have blocked bills that would expand Medicaid and open the state to billions in federal incentives supporters say would pay for the expansion and lower costs for hospitals that care for large numbers of uninsured patients. Opponents say the program is poorly managed and financially unsustainable. Roughly 20% of the Texas population is uninsured, and the state has the largest number of uninsured residents in the nation. Do you support expanding Texas Medicaid?