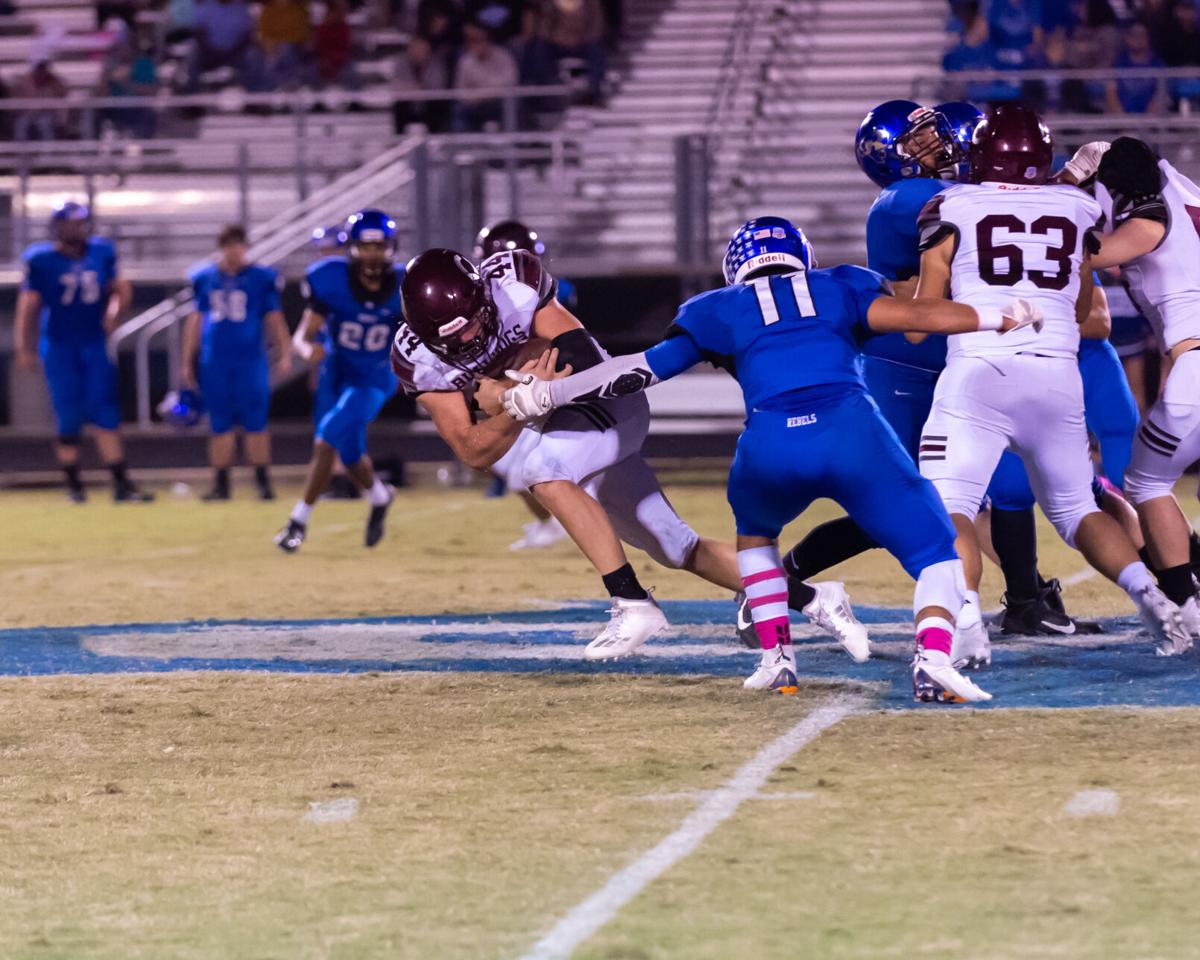 Cooper’s Chase Morales (44) clings to the ball as he fights his way up the middle against the Rivercrest Rebels. 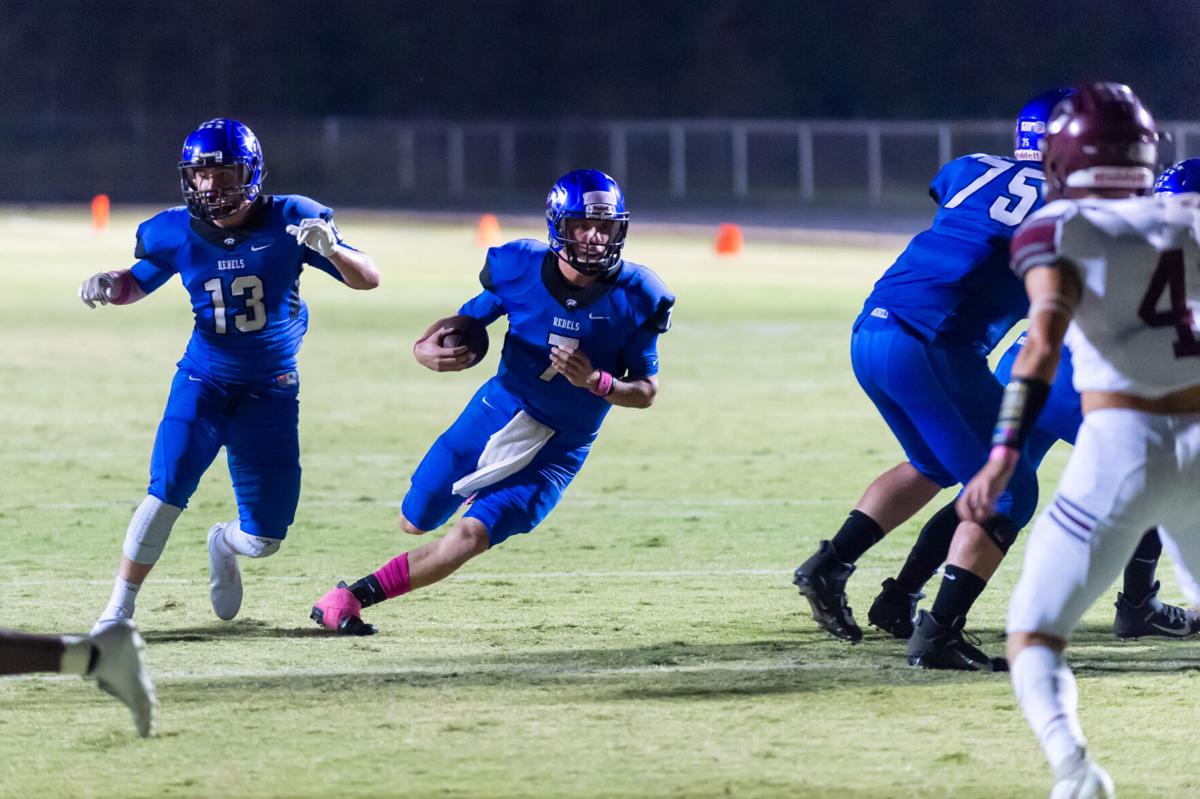 Rebel quarterback Will Grider (7) keeps the snap and goes up the middle for the second Rivercrest touchdown of the game.

Cooper’s Chase Morales (44) clings to the ball as he fights his way up the middle against the Rivercrest Rebels.

Rebel quarterback Will Grider (7) keeps the snap and goes up the middle for the second Rivercrest touchdown of the game.

Just six minutes into the Friday night game between the Rivercrest Rebels and Cooper Bulldogs, the Rebels were firmly in the driver’s seat and it looked like a runaway, blowout victory might be in the works. However, that did not end up being the case.

The Bulldogs shored up their play, stayed resilient and never stopped believing in themselves, and after trailing 21-0 in the first quarter, they shut Rivercrest out for the remaining three quarters to come away with a hard-fought 24-21 win.

The Rebels’ first points came on their second drive of the game. After the defense gave the offense good field position by forcing a turnover on downs, it took the Rebels just three plays before quarterback Will Grider found the end zone on a 30-yard touchdown run, weaving his way through a slew of would-be tacklers to give Rivercrest an early 7-0 lead.

Their next score came mere minutes later after an interception by Kamryn English gave them the ball back in the red zone. Again, it was Grider who ran it in for the Rebels. Kicker Connor Young was again true on the point after, and Rivercrest went up 14-0 less than four minutes into the opening quarter.

On Cooper’s side, not much went right in the first half, offensively or defensively. When the Bulldogs had the ball in the opening stanza they weren’t able to find any space to get out into the open field, and on defense they proved incapable of preventing the Rebels from moving the chains early on.

And so it was, on just their fourth play after Rivercrest’s second touchdown, that the suffocating Rebel defense again forced and recovered a fumble, this time thanks to defensive lineman Darrion Ricks.

“Our defense did really well early on,” Rivercrest head coach Lance Connot said. “They forced some big turnovers, and that put our offense in the position to score.”

Once again, the Rivercrest offense started its drive with superb field position. And once again, Grider was able to find the end zone to put the Rebels up 21-0.

“With what Will brings to the table, being able to run and throw the ball, he really makes our offense operate,” Connot said. “We were clicking there in the first half and with him at quarterback, he’s going to give us a chance to win.”

Despite getting metaphorically punched in the mouth in the first quarter, though, the Cooper Bulldogs remained resolute.

“We weren’t focused and we were pretty sloppy in the first quarter,” Cooper running back Jayden Limbaugh said. “I told everyone though, ‘Hey, we’re still in this. We can still win this.’”

“They blew off the ball, and we just weren’t ready for them,” fellow running back Chase Morales added.

While yards were hard to come by for the Bulldogs in the first quarter, the Cooper offense began clicking in the second. On the first drive of the quarter they strung together an extended drive that took them all the way to the goal line.

Even though the Bulldogs showed signs of life on their balanced drive downfield, the Rebel defense stood strong with an impressive goal line stand, thanks to big tackles from Kirk Killian and Ricks, and Cooper came away empty handed.

For the next few possessions, the teams seemed to be at a stalemate. Both offensive units were able to get some positive yardage, but not enough to put any points up on the board.

That changed with about three minutes left in the half, when Limbaugh broke through the Rivercrest defense and darted down the sideline for a 58-yard touchdown run. The point after was off the mark, but Cooper was now on the board, 21-6.

Seeming invigorated, The Bulldog defense came away and gave the Rebels a taste of their first quarter medicine, forcing a fumble on a sack of Grider, and recovering it for excellent field position.

On the very first play of the drive, Colin Ingram — who had stepped behind center to quarterback the Bulldogs — connected with Markell Smith with a wide open touchdown pass, and the gap was further closed to 21-12.

In the third period, the tides of momentum began squarely shifting in the favor of the Bulldogs. They began moving the ball with much greater effectiveness.

Limbaugh and Morales combined for a lethal running tandem. For the game, Limbaugh had 147 rushing yards and a pair of touchdowns, and Morales had 112 yards on 24 carries.

“We just pounded it down their throats,” Limbaugh said. “A lot of credit has to go to our offensive line too. They had some really nice blocking, and that was why we were able to do what we did.”

And just as importantly, Cooper’s defense stepped up in a big way too. The Rebels — who boast one of the most high-powered offenses in the Red River Valley — were unable to generate much offense at all.

Limbaugh said a key focus of the defense was stopping Grider. Once they were able to do that, winning became much simpler.

“We knew he liked to run it, and we made a point of getting to him,” he said. “Look, he’s probably the best quarterback in our district. But we have number 11 (McGuire) and we’ve got some really, really good players.”

“We told them to keep their heads up, and keep doing what they do, and they definitely turned it around,” Cooper head coach Rod Castorena said.

Mere moments into the final quarter, the Bulldogs cut into Rivercrest’s lead some more, when Smith caught a pitch to the outside and found a hole to run it into the end zone, to bring the score to 21-18.

Rivercrest couldn’t get anything going on their ensuing possession, and were forced to punt the ball away after a quick three-and-out.

After receiving the Rebels’ punt, Limbaugh put his team ahead with a huge 50-yard touchdown run to put Cooper ahead 24-21.

“I was just so happy for my teammates at that moment,” he said.

Rivercrest would not go down without a fight, though. Grider willed the team downfield, connecting with receivers Eli Bivens and Zachariah Lane to help move the ball into Cooper territory. However, the drive stalled out before they could reach field goal range, and when they came up short on a crucial fourth down conversion, the Bulldogs took over with under two minutes to go in the game.

They moved the chains enough to let the clock run out, and when all was said and done, Cooper had an impressive come-from-behind win.

“We build our program on the pillars of love, discipline and mental toughness, and they showed that tonight,” Castorena said. “That’s what we base everything on; it’s about building character, and I thank God that I get to do that every single day.”

In addition to the yards from Morales and Limbaugh, Smith had 62 rushing yards, 17 receiving yards and a touchdown through the air and on the ground. Matthew Langley 43 rushing yards and Ingram added 39 rushing yards. Wyatt Allen also contributed a 38-yard reception.

For the Rebels, Grider finished with 151 passing yards and 94 rushing yards, with a trio of touchdown runs. Zane Dees took five handoffs for 34 yards, Bivins had 79 yards, Christopher Randolph had 36, Lane had 19 and Killian had 17.

The importance of the game was not lost on either team.

“They’re first in the district now, and we’re second,” Connot said after the game. “We’ll learn from this and we’ll recoup. We still have everything in front of us that we want to achieve.”

“This was basically the district championship game, so this is huge,” Limbaugh said. “(Rivercrest is) a good team, and we’re probably the two best teams in the district, so there was a lot riding on this game.”