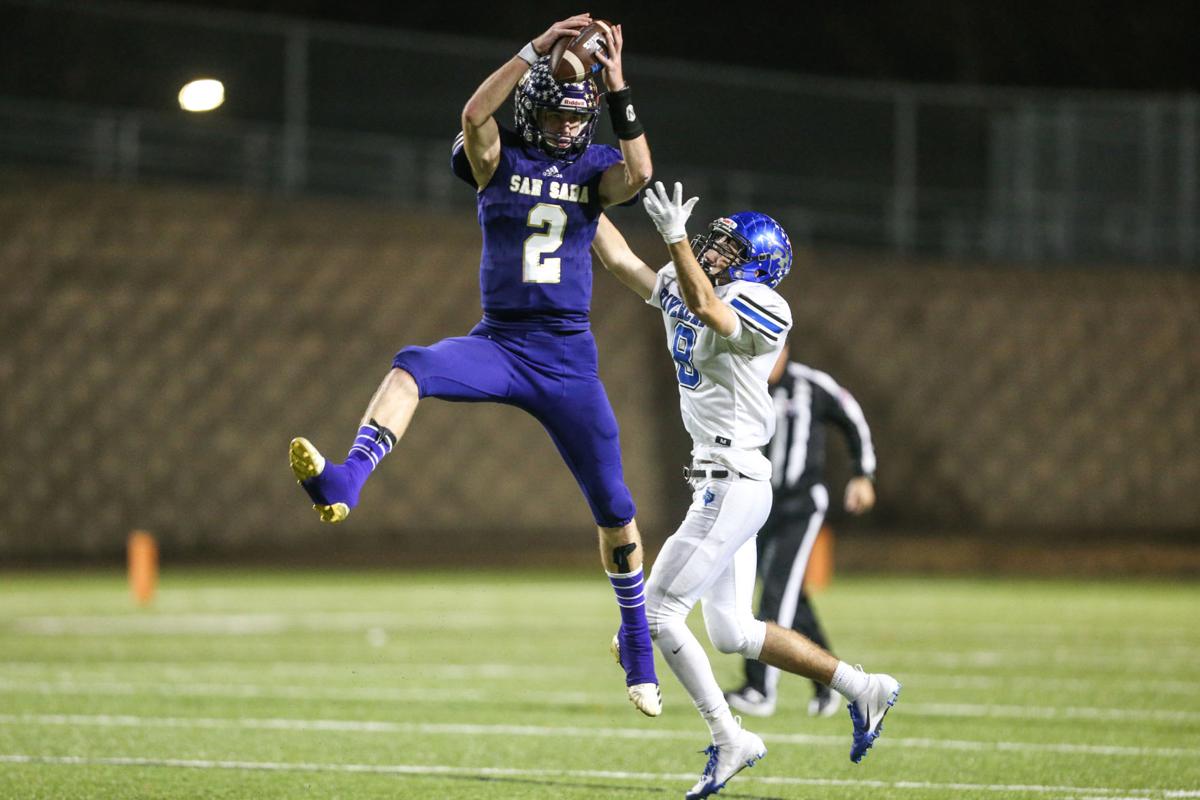 San Saba defensive back Logan Glover (2) picks off a Rebels pass intended for Rivercrest senior Kolby Townes (8), who fights for possession of the ball. 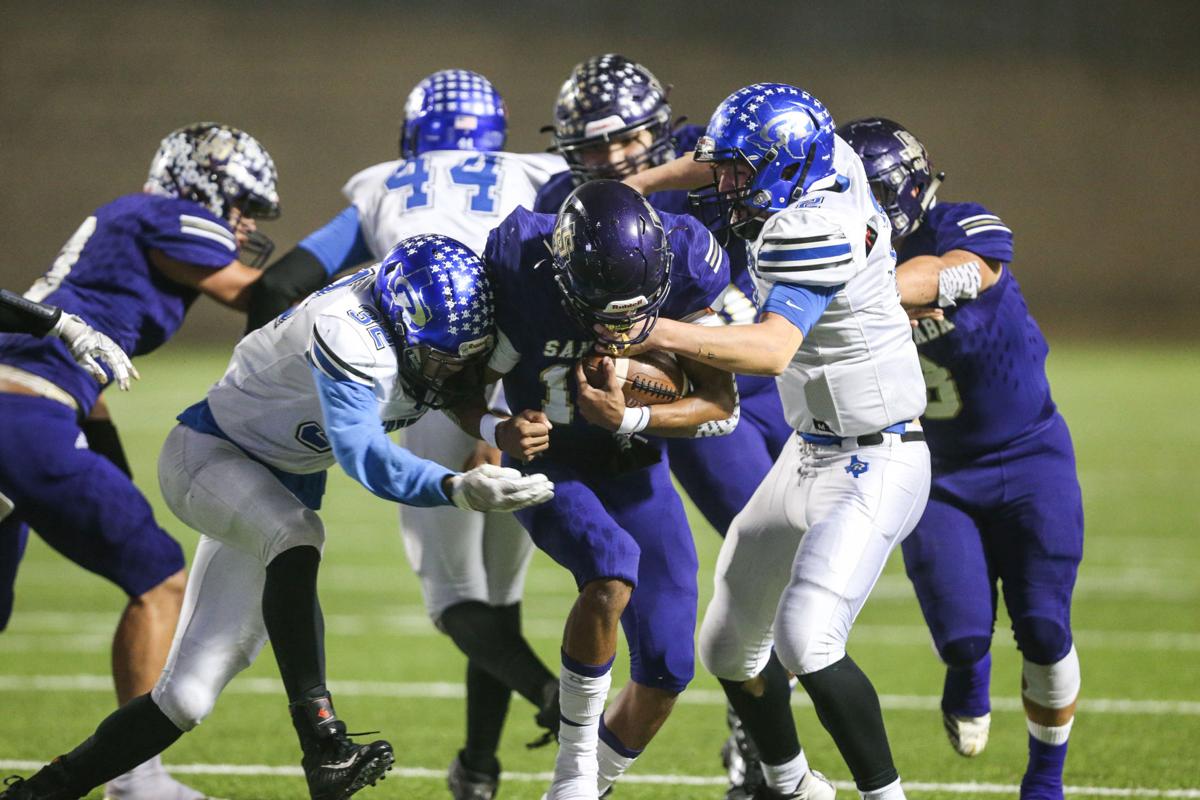 San Saba defensive back Logan Glover (2) picks off a Rebels pass intended for Rivercrest senior Kolby Townes (8), who fights for possession of the ball.

MANSFIELD — The Rivercrest Rebels and third-ranked San Saba Armadillos faced off in the regional semifinals at Mansfield Newsom Stadium on Friday night for a chance to advance to the regional finals.

The game started out perfectly for the Rebels on both sides of the ball. The defense forced San Saba to turn the ball over on downs on its opening drive, then Rebels senior signal caller Devon Womack engineered a strong opening drive that resulted in a touchdown for the Rivercrest offense. After the first quarter of play, the Rivercrest Rebels led the state-contender Armadillos 6-0, but the battle had just begun.

“It started off getting a really big stop down there,” Rivercrest head football coach Lance Connot said. “They came out and drove the ball, and we bent a little bit, but we didn’t break. Our offensive line took control on our drive and we did a few things they hadn’t seen, but overall it was just us executing. We caught some bad breaks before the end of the half, and we lost a lot of the momentum we had. I really wish we could have gone in just down one score.”

Things continued to look up for the Rebels as they stopped the Armadillos in the red zone, forcing San Saba to turn the ball over on downs. However, the ’Dillos defense locked in and forced Rivercrest into a 4th and 20 situation at its own 20. The Rebels punted to San Saba, who took over at midfield wit 9:16 left before halftime.

San Saba cashed in on the very next play.

Senior quarterback Sean O’Keefe fought through a pileup at the line of scrimmage and eventually squirted through on a 50-yard touchdown run, which gave San Saba the lead at 7-6 with 9:04 left following the successful PAT. On Rivercrest’s ensuing offensive possession, the Armadillos defense swarmed Womack in the end zone and took him down for a safety with 8:23 left to extend the lead to 9-6. After that, San Saba forced two consecutive 3-and-outs by Rivercrest and scored on two more rushing touchdowns to stretch the lead to 23-6, the second coming from 22 yards out with 6:12 left following a muffed kickoff return by the Rebels.

However, an interception return for a touchdown by junior safety Bradyn English and a successful 2-point conversion run from Womack with 46 seconds left before halftime cut the deficit to 23-14. After that, though, San Saba drove down the field quickly before the halftime horn sounded and were set to attempt a short field goal, but the Armadillos’ mishandled the ball. The holder, Justin Yarbrough, picked up the loose ball, defied the odds and ran it in for a score at the horn. San Saba led 30-14, and ultimately won the game 56-14 as Rivercrest fought hard throughout, but couldn’t quite fully recover.

“Credit to them, those guys they’ve got over there are tough, and they do a really good job of starting and stopping and reading their blocks — even when nothing is there, they will find running room,” Connot said. “The play right there before the half that was called an incomplete pass instead of a fumble was killer, and they ended up going on to score. It was a back-breaker. The second half, things kind of got away from us a little bit and the wind wasn’t helping with field position. When you’re playing against good teams, you can’t let that kind of stuff happen.”

Womack led Rivercrest finishing with 17 tackles on defense and 174 total yards of offense. He completed 11-of-25 passes for 122 yards with 1 touchdown and 3 interceptions, while carrying the ball 21 times for 52 yards.

Despite the road ending in the regional semifinals, it was the second time in three years the Rebels made it to the third round of the playoffs. In addition to that, this year’s senior class finished with an overall record of 40-8.

“I’m proud of the fight this team has — they’re a very selfless team,” Connot said. “The group of guys we had out there tonight just want to continue to work, make each other better and they don’t care who it is that is getting the ball or tackles. They’re all bought in to doing their job, and the adversity they’ve overcome this year has been tremendous — I can’t ask anymore out of this team and staff we had. They played as hard as they could every snap. We told the seniors if you knew when you were freshmen that you would only lose eight games in four years, you’ll take it right there.”

Rivercrest’s season came to an end, while San Saba will face No. 14-ranked Valley View in the regional final.

(B) Liberty-Eylau at Clarksville 7 p.m.

(B) Paris in Van Tournament TBA

(B) NL in Edgewood Tournament TBA

(B) Clarksville in Edgewood Tourn TBA