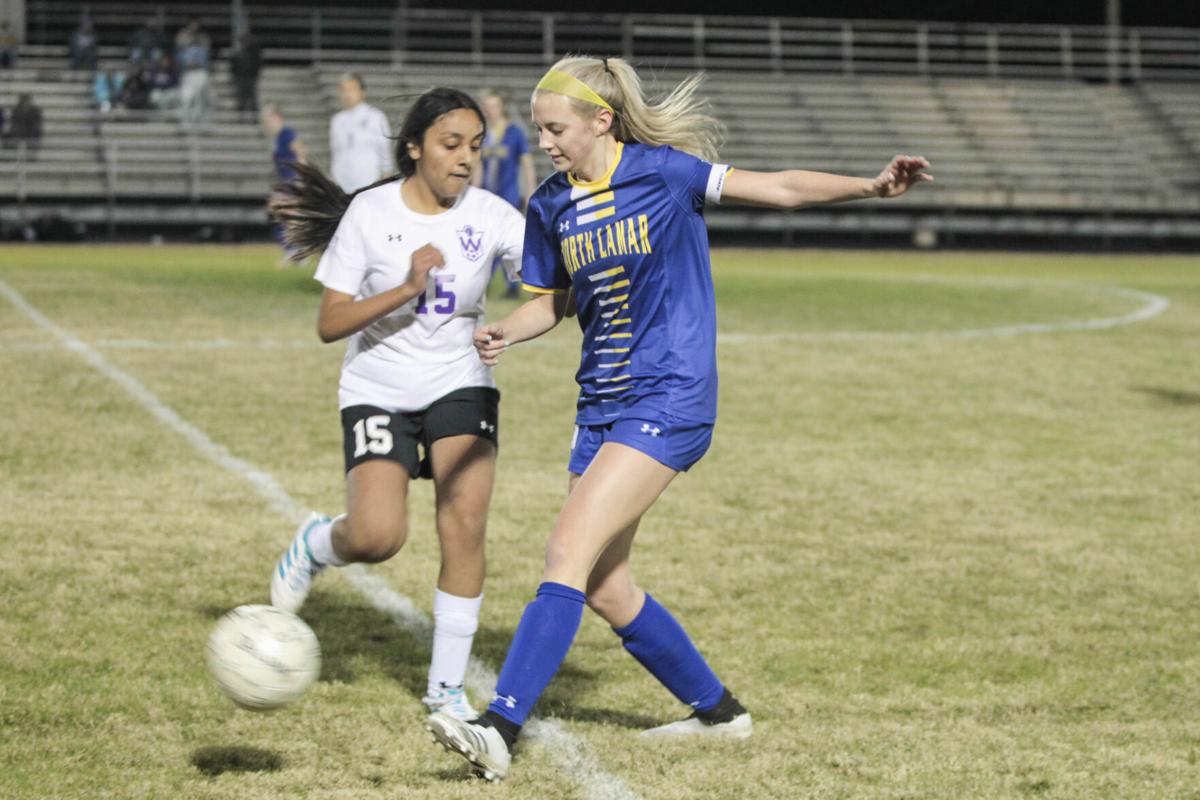 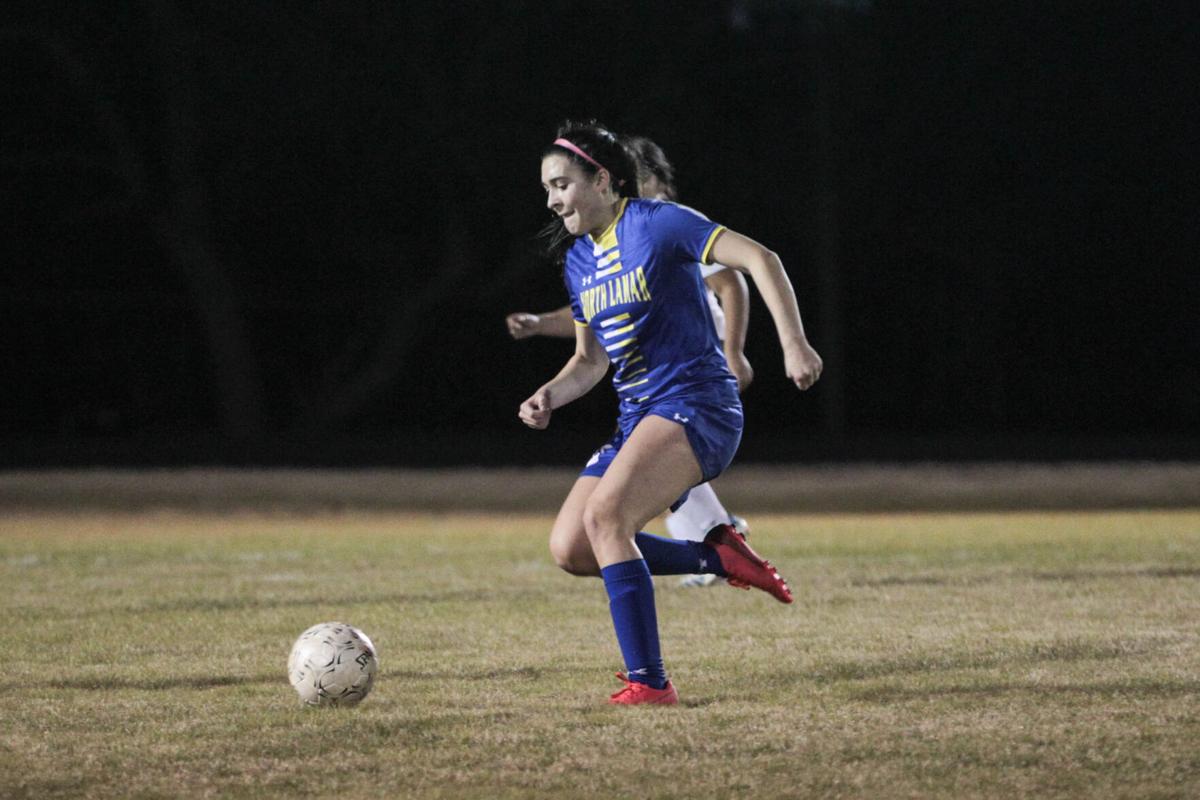 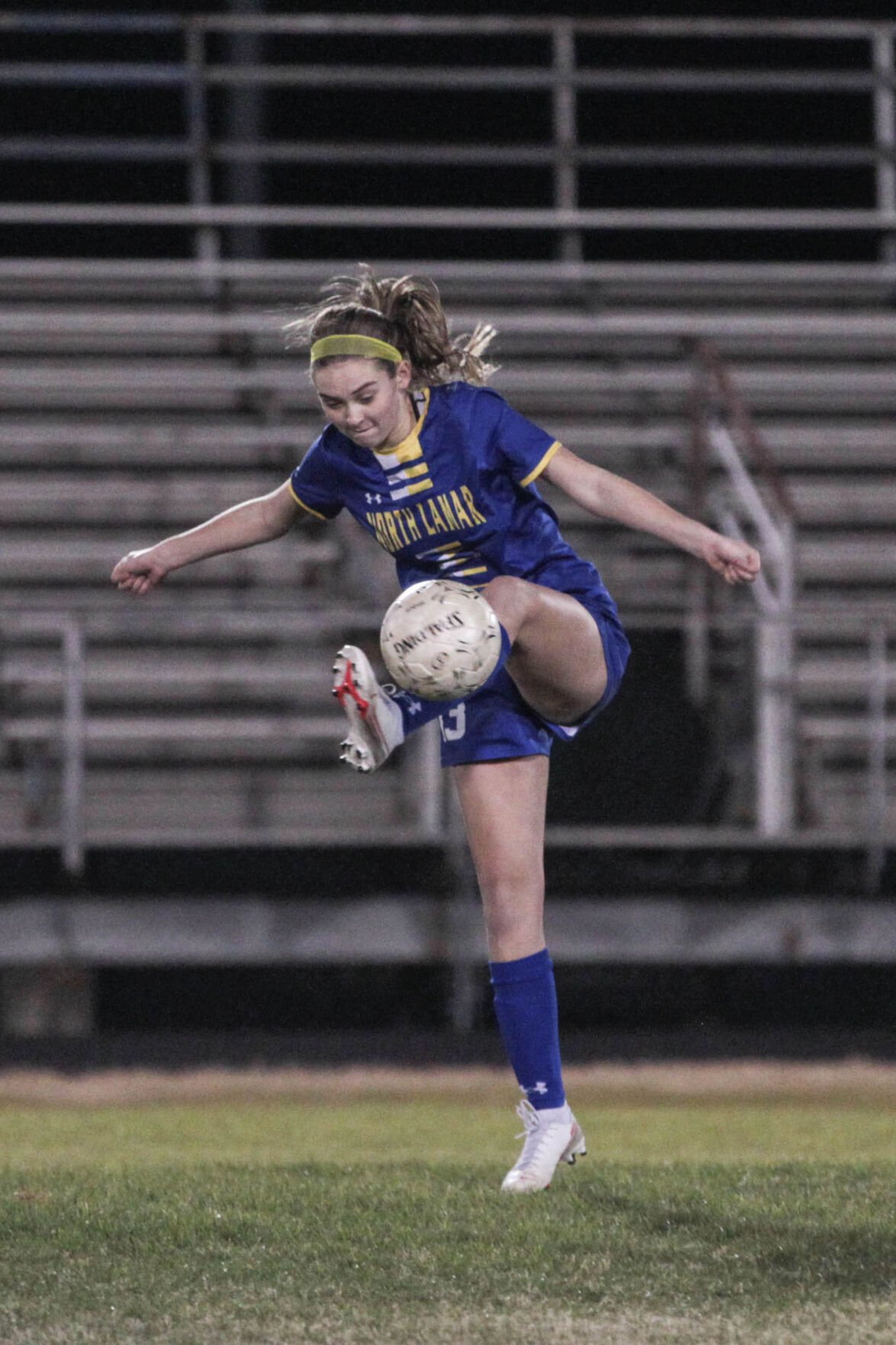 Pantherette Camila Lenertz had a hat trick midway through the first half, and the North Lamar girls soccer team coasted to a 5-2 victory over the Bonham Lady Warriors in their season home opener.

“It’s always anxious (before the first home game of the season),” North Lamar head coach Michael Pointer said after the win. “But to get the win at home, especially playing the way we played tonight, it’s a good feeling.”

Right out of the gate, the Pantherettes took control, keeping the ball down in Bonham territory, where they peppered the Lady Warriors’ goalie with shots.

Their defense was solid, hardly allowing Bonham to take many shots on goal of their own, as North Lamar midfielders excelled at clearing any ball that came their way.

“We decided we were going to possess the ball, and things are good like that when you do,” Pointer said. “Obviously if you do a good job passing and possessing, you’re going to score off of those usually.”

The few times Bonham was able to break past North Lamar’s defenders in the opening quarter, Pantherette goalie Adriana Perez was more often than not able to swallow the ball and dash their hopes with some spectacular saves.

“She lives on the edge a little bit,” Pointer said of his goalie. “She plays aggressive and she plays off emotion, but she made some fantastic plays tonight. I’m very proud of her.”

Lenertz got the Pantherettes on the board first, scoring the game’s first goal roughly nine minutes in with an impressive shot from the far corner. Then, only about five minutes later, she punched another goal into the back of the net.

“Camila is one of our best footwork girls, and has a ton of skill,” Pointer said. “A game like this is great for her confidence, and she’s going to grow from here. She was a great addition for us coming off the bench last year, and I think she’ll take a big step forward this year.”

A few minutes after Lenertz’s second goal, Bonham got on the board with a goal of their own, but then Lenertz answered right back, scoring her and North Lamar’s third goal of the game on a penalty shot, giving her a hat trick barely midway through the opening frame.

All the while, the Lady Warriors struggled to get anything going offensively on their end. With roughly nine minutes to go in the half they took their first shot on goal in several minutes, and it was promptly stopped by Perez.

And the Pantherettes’ explosive offense wasn’t done yet. With roughly four minutes to go in the half, Pantherette Emori Watson scored on a breakaway, and then Lenertz scored the team’s fifth goal — her fourth — on a bullet of a shot.

The second half was more subdued than the first. North Lamar still was able to take a number of shots on goal, but the team was more concerned with maintaining possession and milking the clock.

Bonham added one more goal in the second half, but not before Perez brought the North Lamar faithful to their feet with some more stellar saves. And by the time the Lady Warriors came by their second goal of the game, the outcome was no longer in doubt.

“This was a good win, and hopefully we can build on this and continue to grow,” Pointer said.

Would you support increasing a voice call tax to support the Universal Service Fund?

Some rural Texans could lose phone and internet service after the Public Utility Commission slashed subsidies that help providers offer service in sparsely populated areas. Money flows into the Universal Service Fund, which the commission oversees, from a 3.3% tax on voice calls. But a shift to internet-based phones has decreased the number of voice calls, depleting the fund. Some have called for an increase in the tax. Would you support that approach?