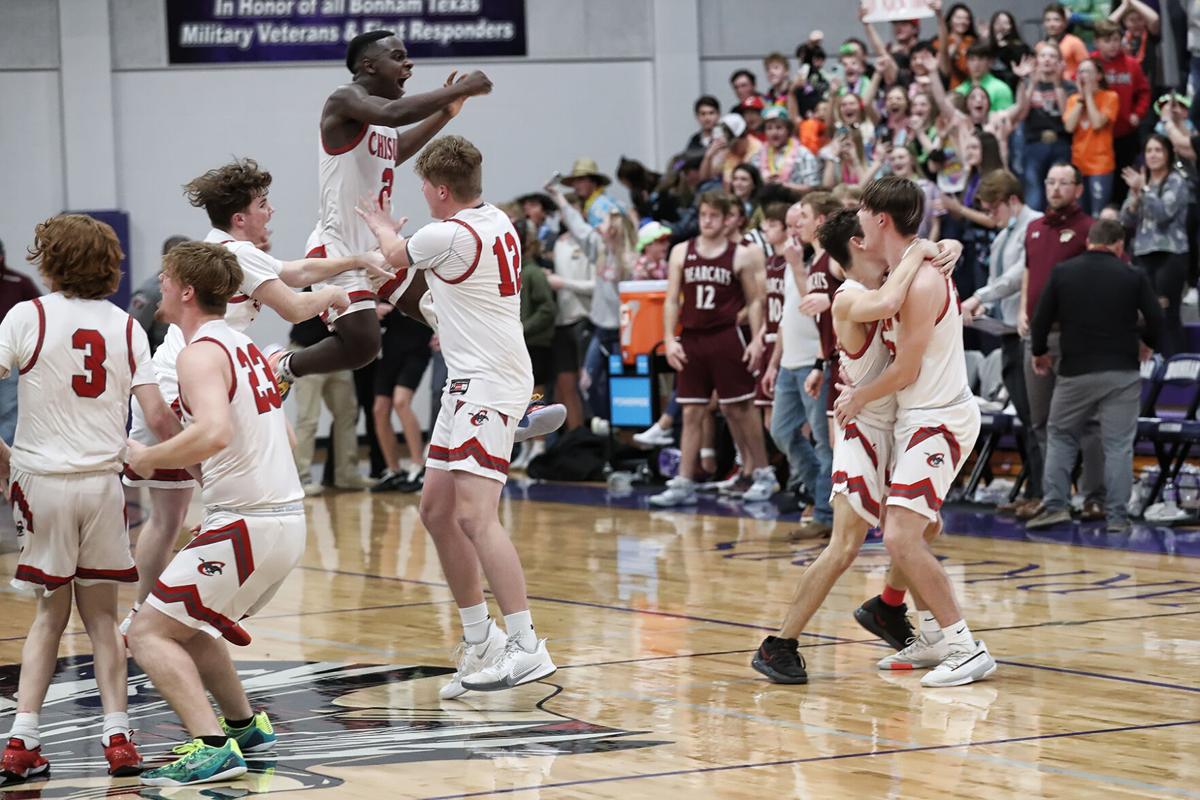 Members of the Chisum Mustangs react after downing Whitesboro on Tuesday. 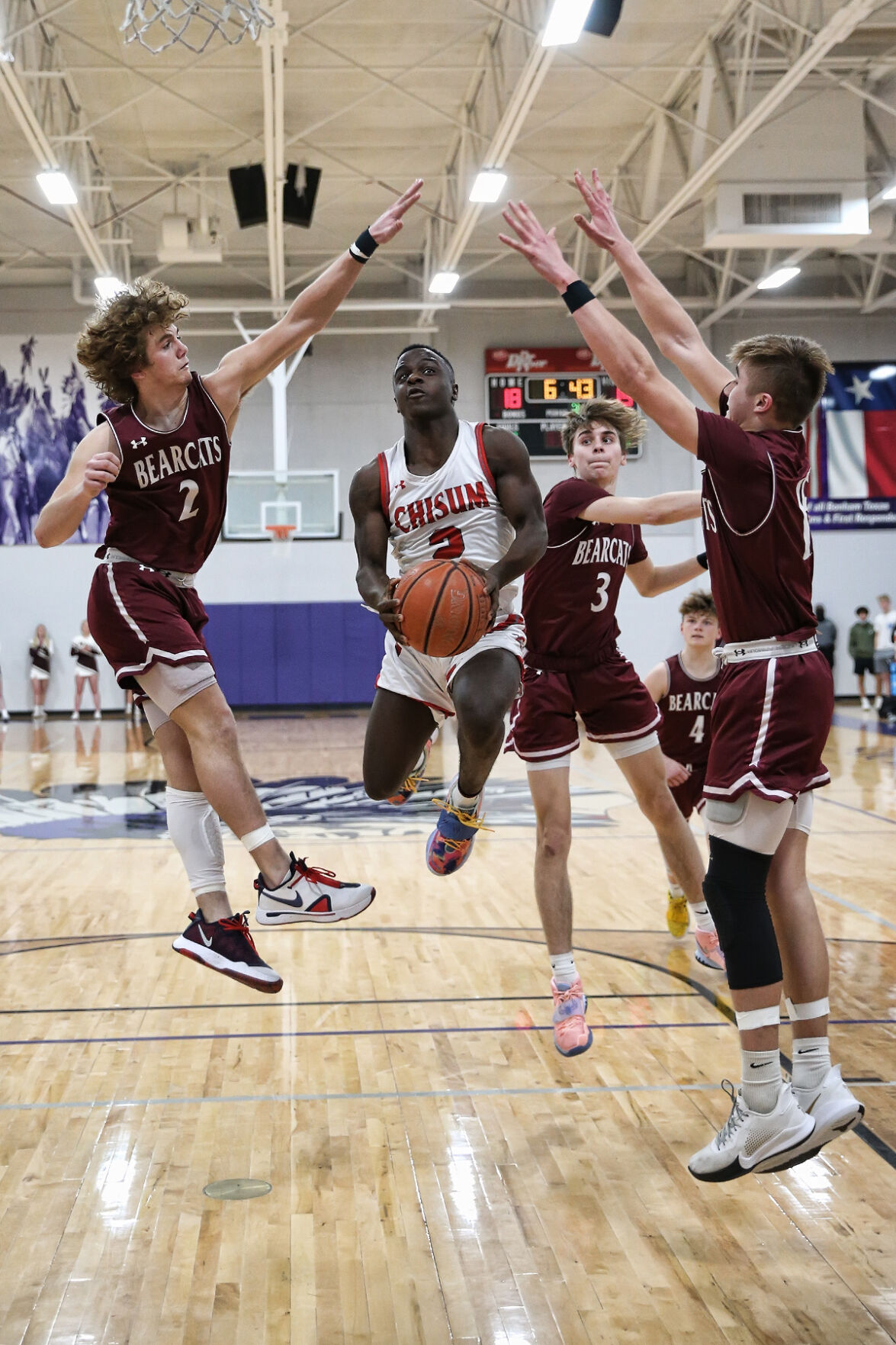 Pictured, Chisum guard Zaquavious Price leaps into the air for a layup while a trio of Whitesboro defenders attempt to stop him. He finished with 15 points in his team’s win. 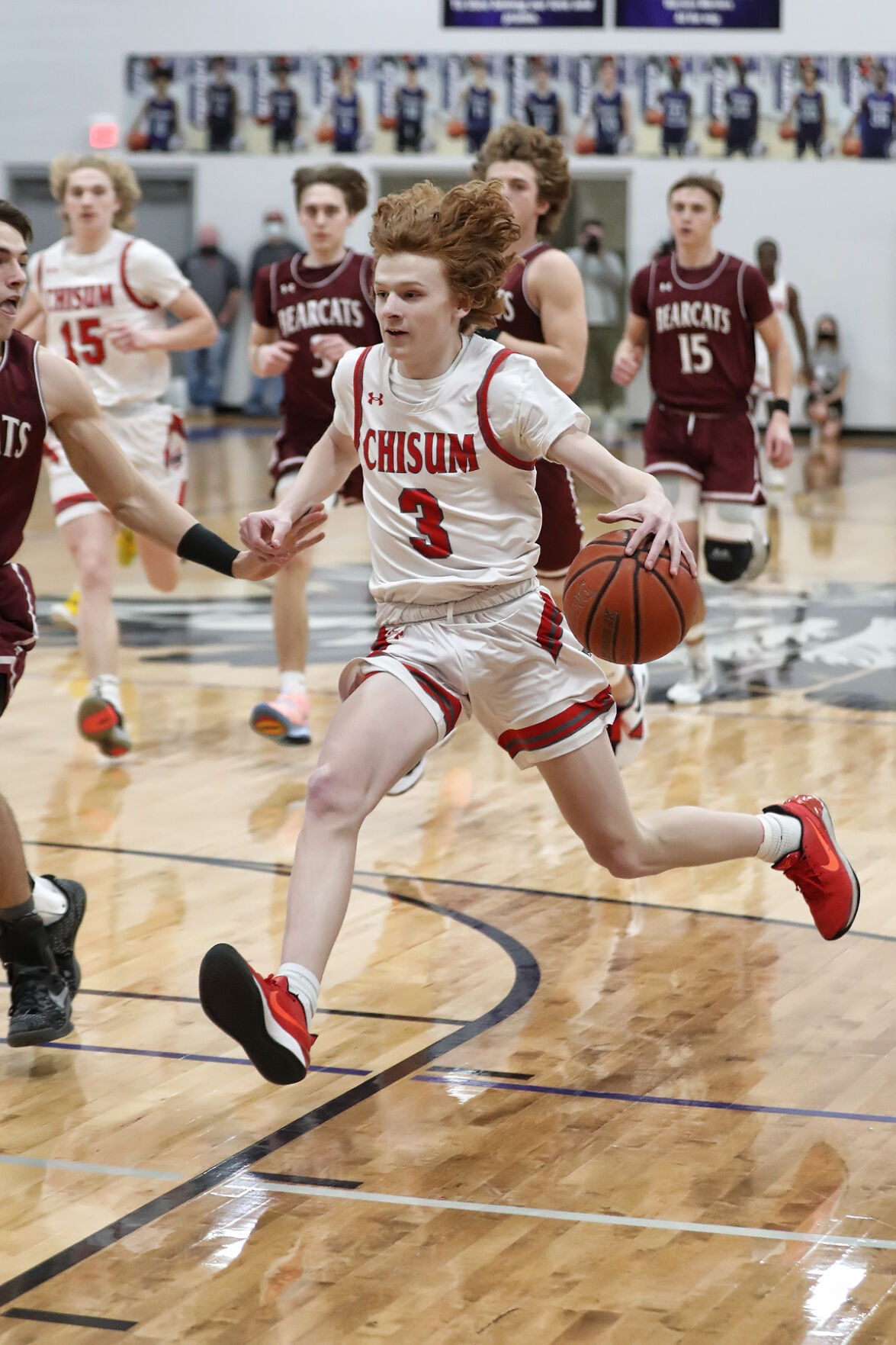 Mustang Evan Wood drives to the hoop against Whitesboro on Tuesday. 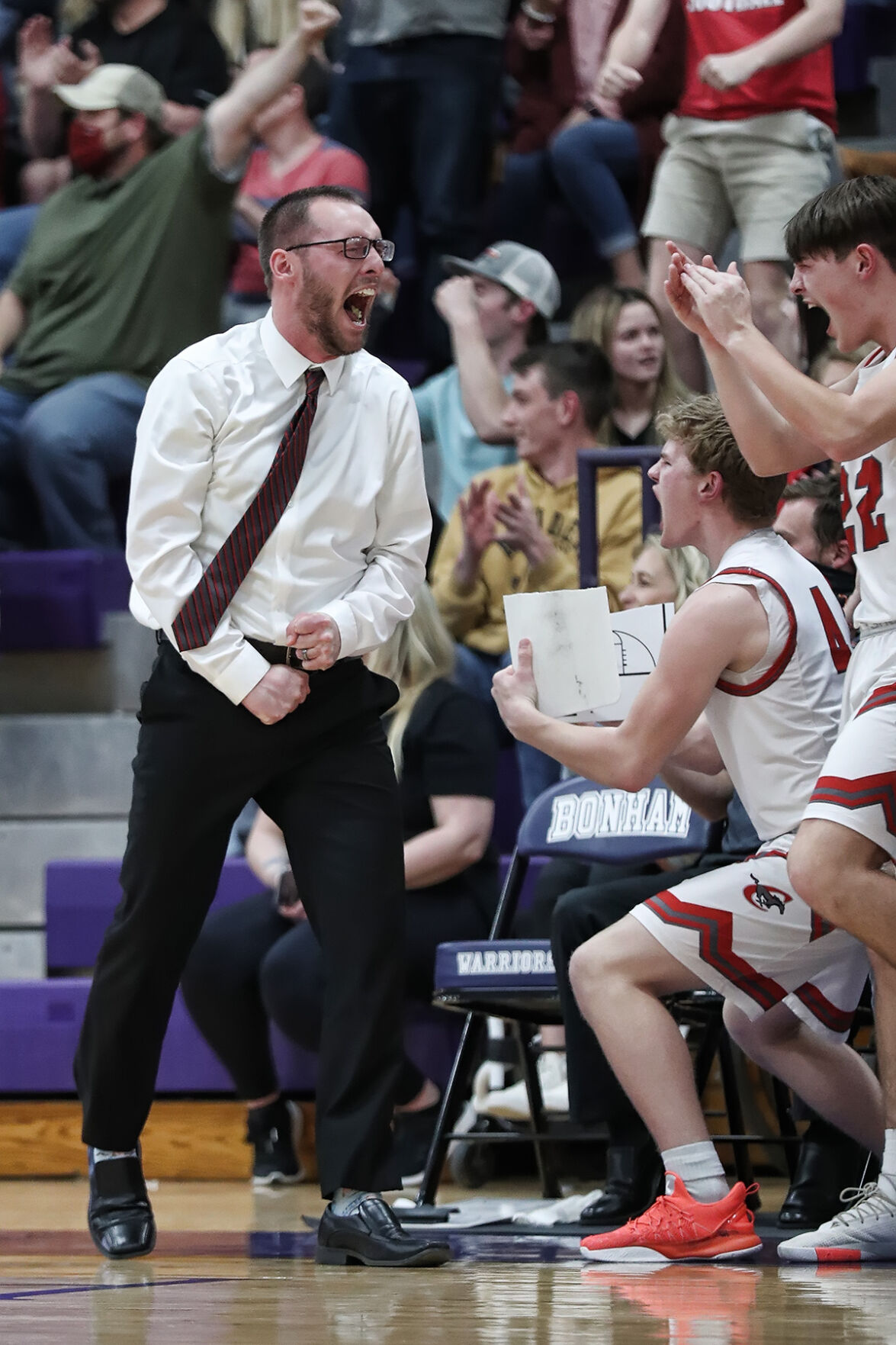 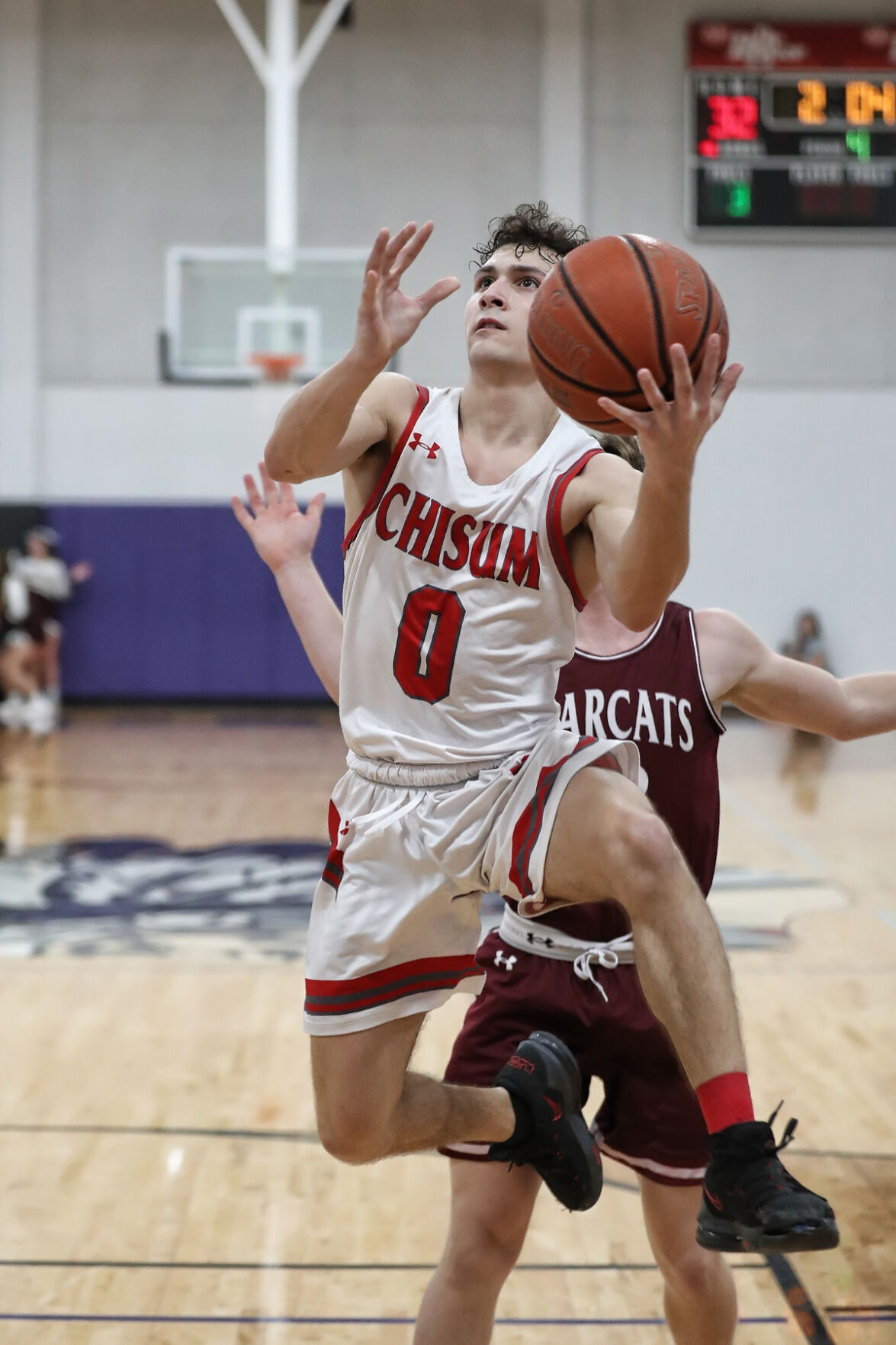 Chisum guard Keaston Lawrence takes the ball to the paint.

Members of the Chisum Mustangs react after downing Whitesboro on Tuesday.

Pictured, Chisum guard Zaquavious Price leaps into the air for a layup while a trio of Whitesboro defenders attempt to stop him. He finished with 15 points in his team’s win.

Mustang Evan Wood drives to the hoop against Whitesboro on Tuesday.

Chisum guard Keaston Lawrence takes the ball to the paint.

A common turn of phrase in sports is, “The best offense is a good defense,” and on Tuesday that proved true for the Chisum Mustangs, who defeated Whitesboro in a 40-37 thriller on the back of some truly stellar defense. With the win, the team advances past the second round of the playoffs for the first time since 2000.

“This is a great feeling,” Chisum junior Evan Wood said of the team winning the area championship for the first time in two decades. “We’re setting the culture for the people who come after us, and it’s just great.”

Right away, fans who made the trip to Bonham High School for the game saw what type of game they were in store for. Chisum couldn’t buy a basket in the opening minutes of the game but made up for it with stellar defensive tenacity, and it took roughly three minutes for the Mustangs to take the lid off the basket with a fast-break layup by Wood.

Wood helped lead the defensive clinic Chisum put on, drawing a pair of charges in the opening minutes, and several more over the course of the game.

“When our shots weren’t falling, we knew we were going to have to pick it up on defense,” Wood said. “I thought I’d go and be the first one to pick it up. I’ve been taking charges all year, so I just went out and kept taking them in the playoffs.”

“I’m so proud of Evan,” Chisum head coach Brian Temple added. “He’s such a competitor and has come such a long way from where he was when he got here. You look at him, and he shouldn’t be able to do the things he does defensively.”

It would be another couple minutes before point guard Keaston Lawrence gave Chisum its second basket. Whitesboro would score two late baskets of its own, though, and at the end of the first period the score was deadlocked at just four points apiece.

Both teams had a bit of an easier time scoring in the second quarter. Whitesboro took its first lead of the game when they drove into the paint, were fouled and converted the and-one after sinking the shot, but Wood answered right back seconds later with a 3-pointer from the corner that tied the score right back up.

The two teams traded baskets throughout the quarter, with Whitesboro holding the slimmest of leads for most of the period. The Mustangs reclaimed their lead on a corner triple by Jett Petkus, and the team would keep the lead until late in the fourth quarter.

Lawrence provided the spark the Mustangs needed in the second, scoring six of his 11 points in the stanza. Headed into the halftime locker room, Chisum led 18-15 in a low scoring battle.

Defense once again took center stage in the third, and the score remained motionless at 18-15 for roughly half the quarter.

“It was all about staying in front of our man without fouling, and being disciplined,” Lawrence said. “I’m so proud of the way my boys played tonight.”

Both teams’ defense was exemplary, but Chisum eventually got on the board when speedy guard Zaquavious Price scored a trio of baskets, the latter of which came with barely a second left on the clock, as he drove to the rim in traffic and finished with defenders draped all over him.

“He definitely put the team on his back offensively in the second half,” Temple said. “He’s just a tremendous athlete who can get his points against any team out there.”

Mirroring the first half, points came easier to both teams in the fourth, and a late surge by Whitesboro led to as dramatic a finish as you’ll find.

The Mustangs stretched their lead to as many as eight points on a basket from deep in the paint by Wood that pushed the score to 29-21 with about five and a half minutes to go. A minute later, Chisum was up seven, and it looked like the team was on the precipice of putting the game out of reach. That all changed when the Bearcats hit two 3-pointers in the span of about 30 seconds, cutting the deficit to just a single point.

Then, with just over two minutes to go in the game, Whitesboro claimed its first lead since the second quarter when yet another 3-pointer put them up 33-32.

“We just had to keep playing our game and not get rattled,” Lawrence said.

Lawrence reclaimed the lead for the Mustangs on the very next play, blowing past his defender to finish in the paint.

Later, with under a minute left in the game and the Mustangs attempting to inbound the ball from under their own basket, Wood, the inbounder, hit Petkus with a jaw-dropping full-court pass for an easy basket that pushed the score to 39-35.

“I’d love to take credit for that, but that wasn’t even what I’d drawn up,” Temple said of the play. “He makes me look like a better coach than I am. … I don’t know many guys who can make that pass.”

As the Bearcats and Mustangs traded blows down the stretch, the Chisum fans in attendance got louder and louder until they reached a deafening fever pitch.

“The energy in here was fantastic,” Temple said. “We have great fans and an amazing student section that supports us, and we always appreciate them.”

“We feed off the energy, for sure,” Price added.

After Whitesboro again cut the deficit to two with a bucket that brought the score to 39-37, Price gave his team a bit of breathing room with a free throw with less than 20 seconds left that gave his team a three point lead. He then played stellar defense on Whitesboro’s last play of the game, forcing them to take most of the remaining time getting upcourt and then preventing them from getting a clean-looking 3-point attempt.

Whitesboro’s last-ditch shot clanged off the rim, and Chisum was victorious.

“First half, I was in foul trouble and I couldn’t really help my teammates the way I’d want to,” Price said. “I had to lay it all out there in the second half. It feels amazing.”

Price led the way for his team offensively with 15 points, and Lawrence also finished in double figures with his 11. Wood and Petkus finished with seven.

“I’m so proud of these kids and how hard they fought all game and all season,” Temple said. “We talked before the game, and we knew what type of game this was going to be. They came out and never backed down from the challenge.”