Starting at
$14.00 for 30 days
Get Started
View all rates
You are the owner of this article.
Edit Article Add New Article
You have permission to edit this article.
Edit
Home
News
Opinion
Be Heard
Sports
Classifieds
Obituaries
Customer Service
e-Edition
Paris Life
1 of 5 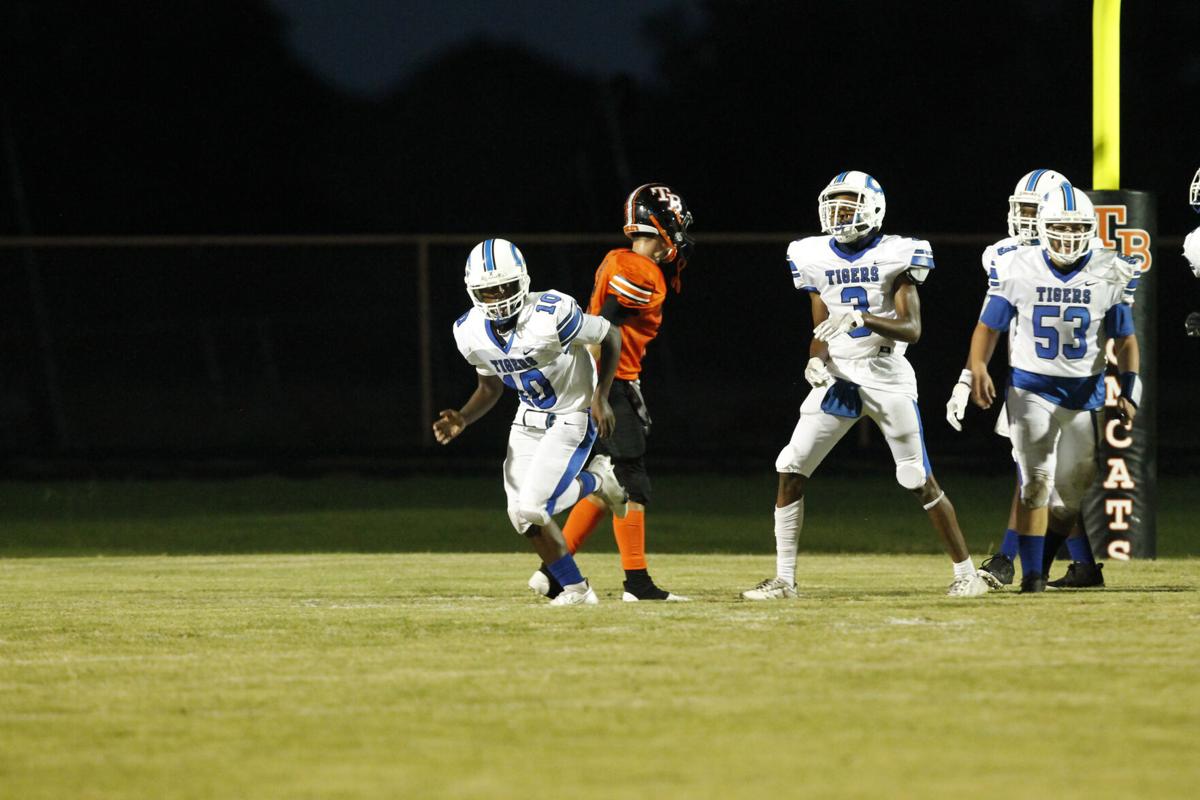 Clarksville TIgers running back Devin Scales runs to the sideline after scoring the Tigers only touchdown of the night in their game against the Tom Bean Tomcats in Tom Bean. 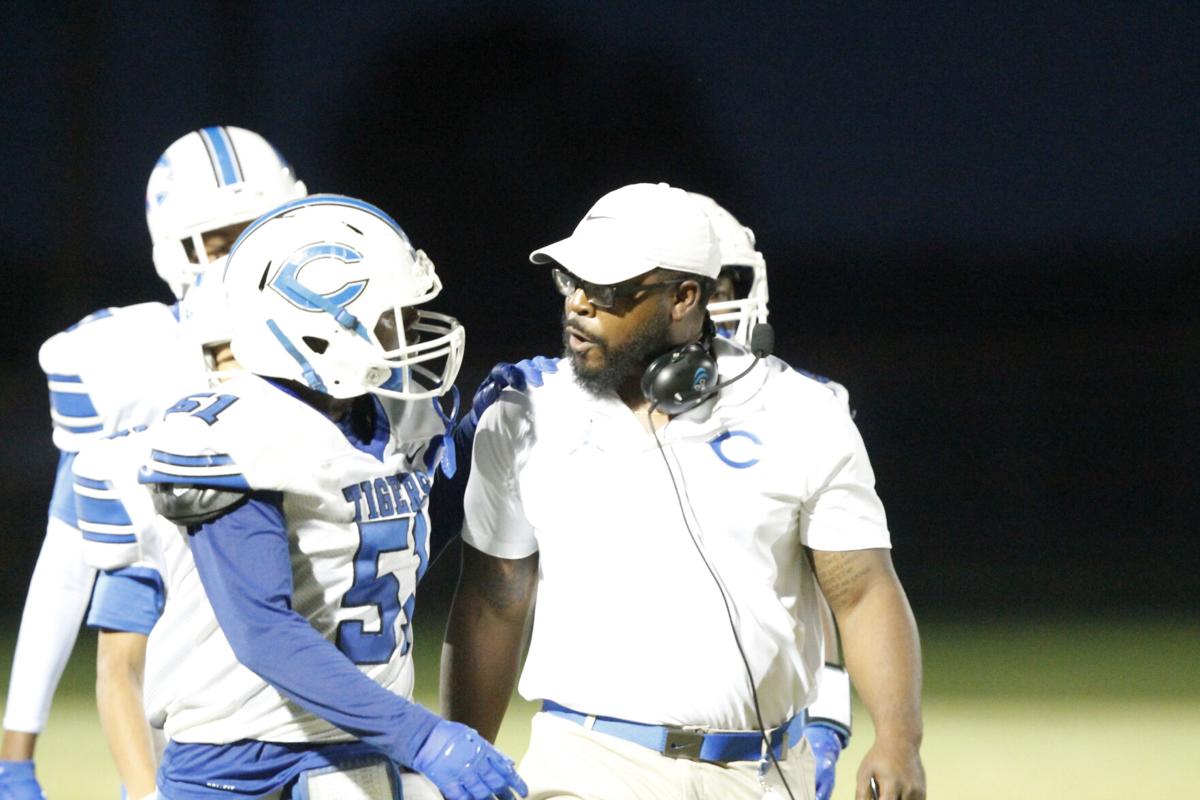 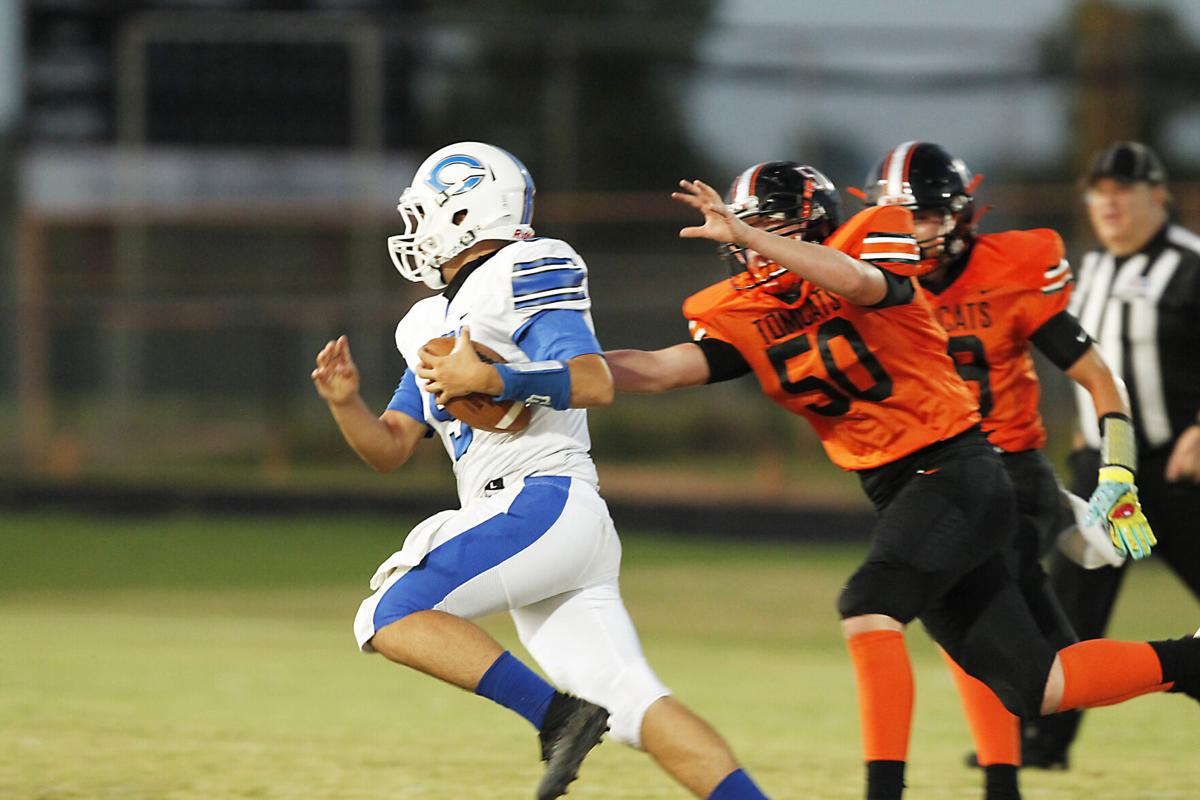 Clarksville TIgers quarterback Johnathan Olguin (9) finds a seam to pick up some yards during Friday’s game against the Tom Bean Tomcats in Tom Bean. 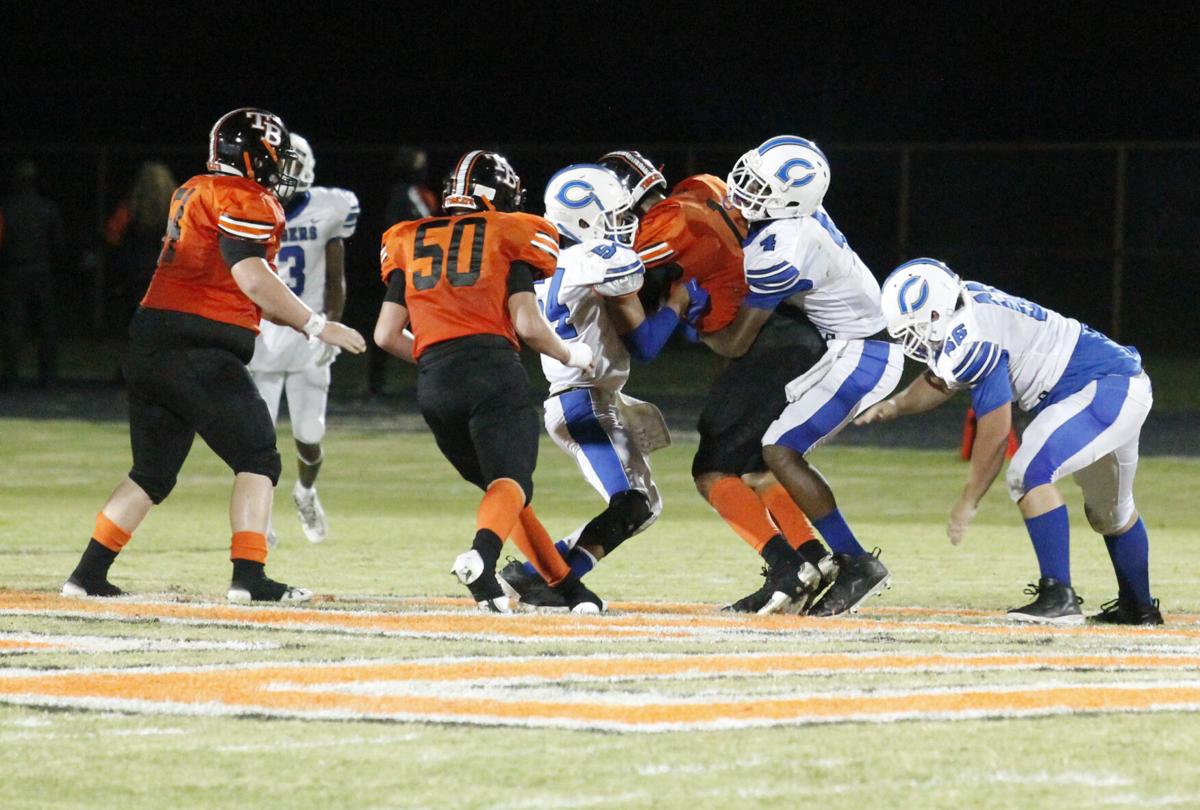 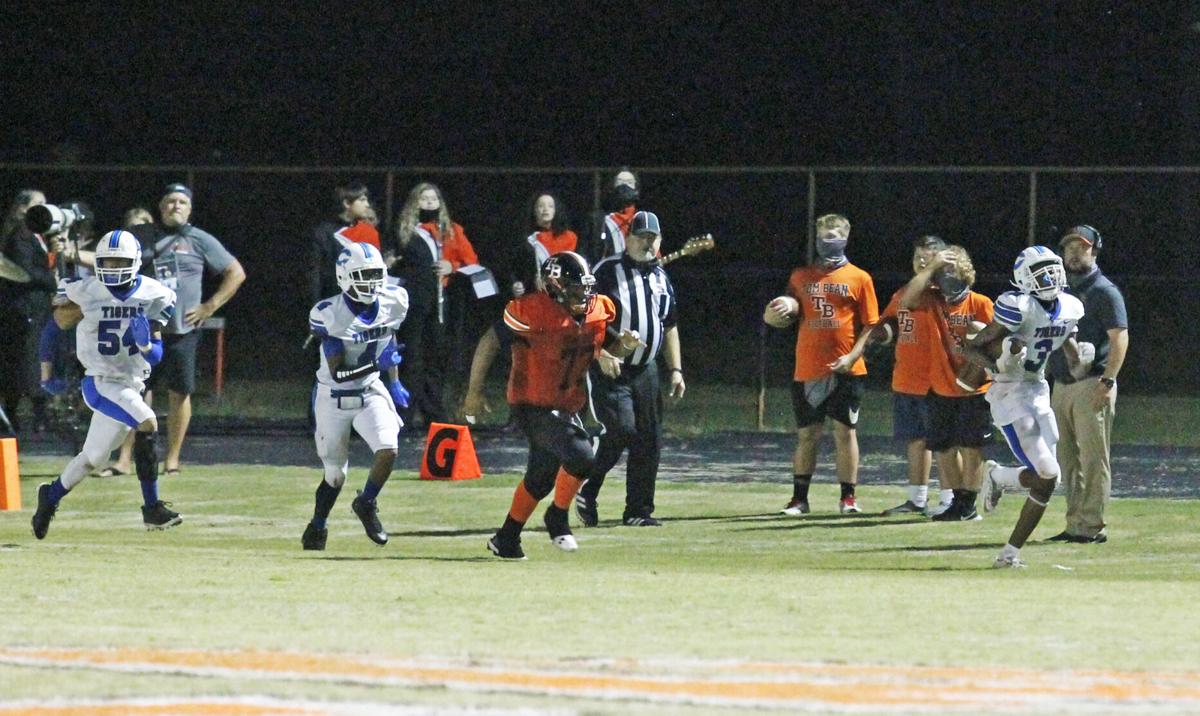 Clarksville’s Amarion Black (3), a wide receiver and defensive back, races away from Tom Bean Tomcats after scooping up Tom Bean’s fumbled two-point conversion to capture the points for the Blue Tigers in Tom Bean on Friday.

Clarksville TIgers running back Devin Scales runs to the sideline after scoring the Tigers only touchdown of the night in their game against the Tom Bean Tomcats in Tom Bean.

Clarksville TIgers quarterback Johnathan Olguin (9) finds a seam to pick up some yards during Friday’s game against the Tom Bean Tomcats in Tom Bean.

Clarksville’s Amarion Black (3), a wide receiver and defensive back, races away from Tom Bean Tomcats after scooping up Tom Bean’s fumbled two-point conversion to capture the points for the Blue Tigers in Tom Bean on Friday.

TOM BEAN — Persistence, and penalties, paid off for the Tom Bean Tomcats (1-2) as they hosted the Clarksville Blue Tigers (2-1) for Friday’s homecoming game. Although the Tigers struck first, fast and hard, the Tomcats capitalized on a few big mistakes to consistently put 6 on the board in three of the game’s four quarters, handing Clarksville its first loss of the season with an 18-12 victory.

“Too many turnovers, too many personal fouls. Everything just caught up with us,” Tigers head coach Jarrick Farmer said after the game. “Seemingly, we were on the way to clean things up, but it seems like we just backtracked.”

The Tigers did play a clean game to start while the Tomcats struggled to go more than a few minutes without getting called for holding or false starts. Clarksville’s first penalty of the night didn’t come until the final five minutes of the second quarter when they were called on a dead ball foul that gave Tom Bean 15 yards and a first down at the Tigers’ 29 yard line. The Tomcats marched the ball into the end zone on a series of runs by wide receiver Ryan Weems and quarterback Jeffrey Sutton, netting their first points of the night.

Clarksville retaliated by causing a fumble on the Tomcats’ attempted two-point conversion that wide receiver Amarion Black scooped up for a 99-yard return, capturing those points for the Tigers for a 12-6 lead going into halftime.

“He’s a great kid. He’s very, very talented,” Farmer said of Black. “He’s going to give you everything he’s got. He’s going to be a great player going forward for Clarksville.”

Black’s points were the last of the night for the Tigers, who picked up 10 points in the first quarter alone. Just seven minutes into the game, a stalled drive ended with 3 points when quarterback Johnathan Olguin put the ball between the uprights with a 26-yard field goal. Then, in the closing seconds of the first quarter, running back Devin Scales found a 10-yard route to the end zone for Clarksville’s sole touchdown of the night. Olguin added the extra point for the 10-0 lead.

“We came out with good energy,” Farmer said of the first half of play. “(Tom Bean) ran a man scheme and they kind of doubled out, so they were minus one in the box at times and it cleared up some things for (Olguin).”

But Clarksville couldn’t hold onto that first half energy, although third quarter play started with a fumble recovery by the Tigers on the Tomcats’ first drive. Olguin had trouble connecting with receivers who often reached for the ball with at least two defenders underfoot. That’s when the penalties started coming — facing 4th and 7, Clarksville lost 5 yards for delaying the game, then lost 5 more on an ineligible receiver call. They punted the ball away only to get called on a personal foul on the Tomcats first down, moving the home team to their own 41 yard line. Minutes later, Clarksville gave Tom Bean a fresh set of downs at the Tigers’ 25 yard line after giving up 15 more yards with another personal foul.

The Tigers defense held the Tomcats at bay on that drive, with Scales dropping Weems in the backfield for a sizable loss that Tom Bean couldn’t recover. The Tomcats turned the ball over on downs at Clarksville’s 21, but the Tigers were forced to punt after an unsuccessful drive that included a holding penalty setback. Despite Tom Bean’s initial loss of 10 yards in the subsequent drive and facing 4th and 18 from Clarksville’s 22, the Tomcats quarterback connected with Weems for 6 points to tie the game at 12 all.

The final touchdown of the evening came on a 3-yard quarterback keeper that swung the score in favor of Tom Bean, 18-12. Once again, though, Clarksville’s defense kept them from finding the end zone for the two-point conversion.

Fourth quarter play was riddled with penalties that largely prevented either team from capitalizing on possession after the final touchdown. Clarksville’s last possession began with a false start penalty that set them up for 1st and 15 from their own 44. Facing 4th and long after failing to connect with a receiver, Olguin pitched to Na’Quavus Caesar in the backfield. Caesar passed to RJ Owens, but the Tomcats were ready. The receiver was unable to bring the ball down as Tomcats defenders swarmed him. With 1:32 left, the Tomcats took knees to claim the game.

“We got guys in good position, but just didn’t make the play,” Farmer said. “I got faith in my kids. I got good kids. We’re going to coach them up, and it’s just a learning game. I hate that they have to learn it this way because those guys come out and they work hard. We’re hard on them, and they know it. And they know we love them.

“When the pendulum swings, you still got to stay up for the challenge. That was our lesson tonight.”

After two weeks on the road, Clarksville is scheduled to defend its home turf against the Prairiland Patriots (2-1) at 7:30 p.m. Friday at New Century Club Stadium.